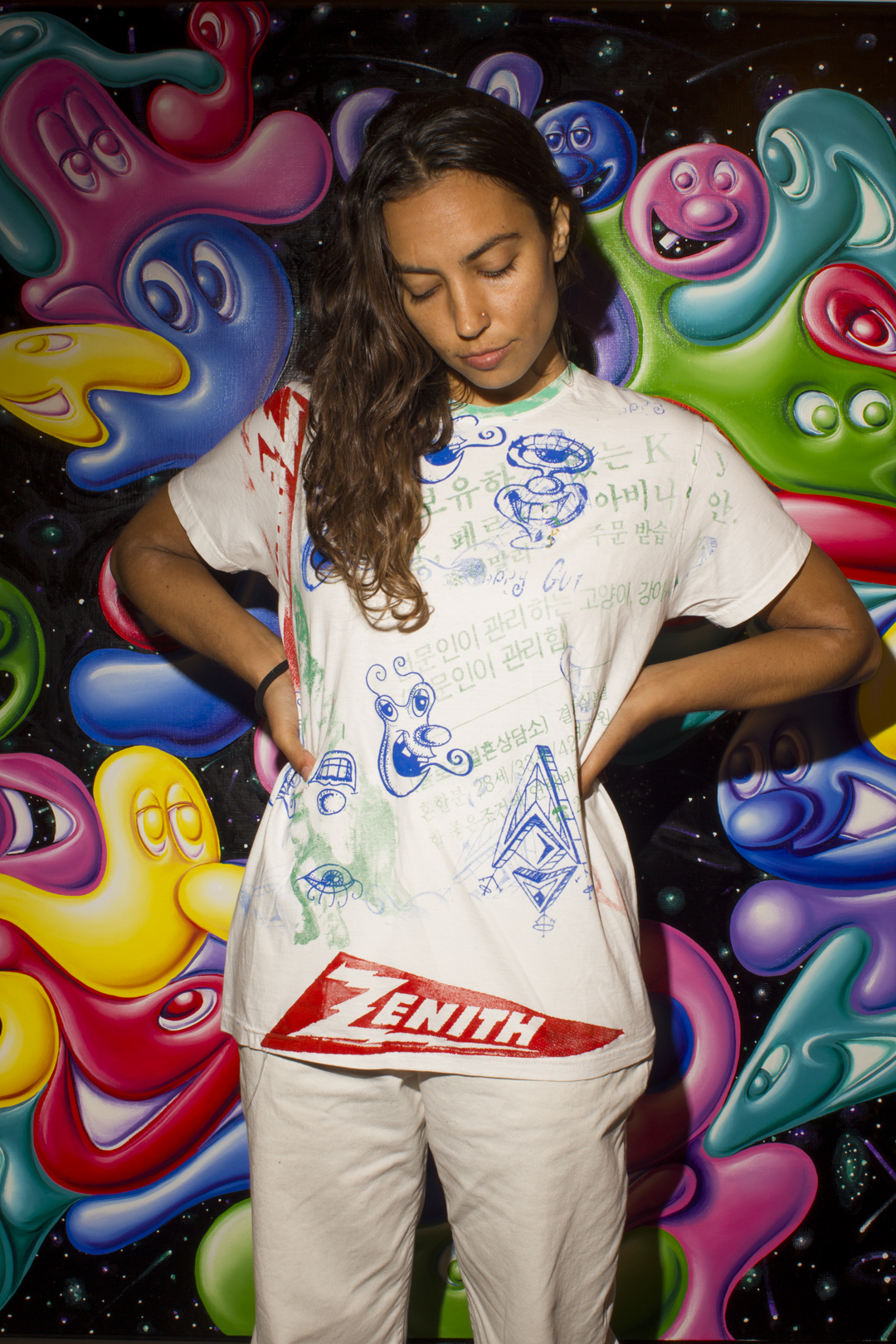 Malia Scharf would often wear clothes splashed with psychedelic pop-art designs, and when her friends would ask how they could get one, she would have to reply that they were one-offs, leftovers, as it were, from silkscreens created by Kenny Scharf, her artist father. Malia, who is a yoga teacher as well as a filmmaker, convinced her father to change all that after the protests at Standing Rock several years ago. “Basically this project stems from Kenny,” she said. “He started doing screen printing in the ‘70’s, he was inspired by Warhol. He uses these screens that he has collected over the years, from magazines and all sorts of media.” His library runs deep and wide and “includes newspaper headlines as well as Italian porno!” she said. “Literally, if you look at the library of the screens he’s collected and made, there’s just everything. And so after using these things on his paintings, he would use them on his clothing. He’d have extra paint and just use them. And that’s been kind of always what he’s done. And then during the movement of Standing Rock, people everywhere I go would ask me, where did you get that shirt? Whatever I’d be wearing that he made originally. And I’d be like, oh no, that’s my dad. And then I realized I want to get these, I want to make these available for people and I want to sell them and then also give proceeds to, at that time it was specifically to Standing Rock, and my dad was like, great, let’s do it.” 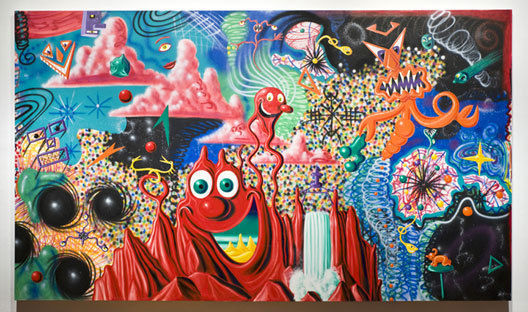 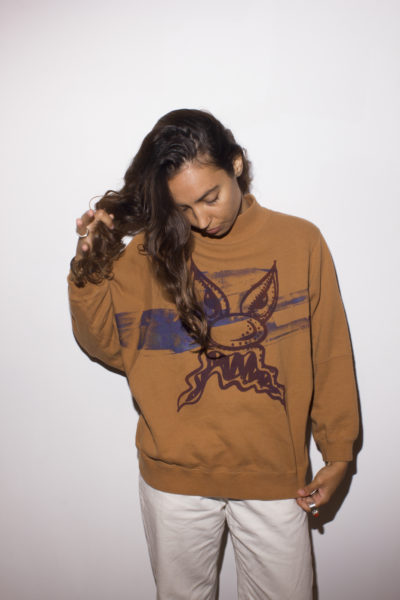 Malia Scharf in a Scharftee

Malia put some of the designs on Instagram, and they would sell out, but the process was so labor-intensive and time-consuming, that it was really not sustainable. But it was the germ of the idea of “Scharftees”, hand-printed clothing, which she and Kenny will be making available at a pop-up shop at Allouche Gallery, later in October. “They’re somewhat accessible, they’re not cheap, but we always have been able to give back, which has been a really big important vision of mine,” she said. “I just love the idea of artists who are successful being able to give back to the community. So that’s kind of the seed of how it started.” 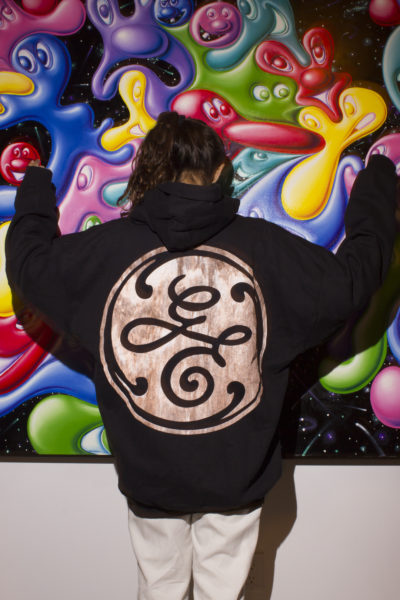 This pop-up will be all-new, one-of-a-kind designs, the commercial aspect of which is new to Kenny Scharf, but the process is not at all new. “I’ve been doing hand-painted clothes for a good forty years,” he said, “so it’s just part of the practice of what I do, and usually I just give them away, but it looks like we’re endeavoring into a more commercial aspect. This is like an introduction in a way. It’s not really that sustainable, but it’s a fun thing to do and it’s a fun introduction to do this.” Scharf creates both small and large-scale works, and is in the museum collections of the Whitney, MoMA, The Broad, and MOCA, LA, to name but a few. But his international recognition has not stopped him from tagging buildings, even getting busted and landing in jail in Brooklyn a couple of years ago. “Someone was filming me and I was like, this is really boring. Let’s go out and I’ll do a tag. At least it’s something to watch. And I said, just look out for me. And then I turned around and I’m getting handcuffs locked on me. And the worst part of this, because if you’re getting arrested, you get thrown in jail, you want a little document, if there is someone with a camera. But he ran away! So not only did he cause me to get arrested, I didn’t even get the footage. I mean, if you’re going to get some footage, it’s pretty good to get footage of yourself getting thrown into the cop car.” The filmmaker was never found, but Scharf believes his graffiti work speaks for itself. “I mean, if you want to be a quote unquote street artist,” he said, “then yeah, you should know how to do it in the street. Not necessarily illegally, and it’s not all about how do you start from zero if you never paid your dues. I don’t know. You know, there’s a lot of stuff that doesn’t seem that legitimate to me. It looks like advertising. It doesn’t look like art.” 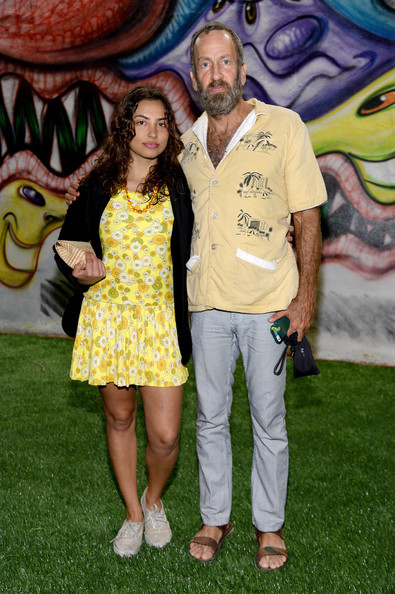 Malia is finishing a film about her father she has been working on for six years that “should hopefully come out soon,” she said. One of the messages in the film, she says, is to never give up. “Yes, he was in New York at the right time,” she said. “You know, there was a lot of luck and timing, but if you don’t know his story, there’s a lot of painful struggle, adversity, and you push through it all. I don’t think people, at least in my generation, even have thought about AIDS and what that was like because we haven’t really lived through something like that. Basically you just never give up, regardless of the criticism or whatever it is that’s coming your way. And then what happens, at least for Kenny, this shared truth, you move through that all and then slowly, little by little, it’s not like you’re exploding onto the scene and you’re going to have all this, but the longevity, of just continuing on and believing in yourself and moving through all the difficulty, that in itself is what is important. I think people might think that Kenny is very one dimensional and like, oh, it’s all funny faces and this and that. But it also really touches on an environment that he really cares about. And then you are able to look a little deeper and you can see that through his art as well.” 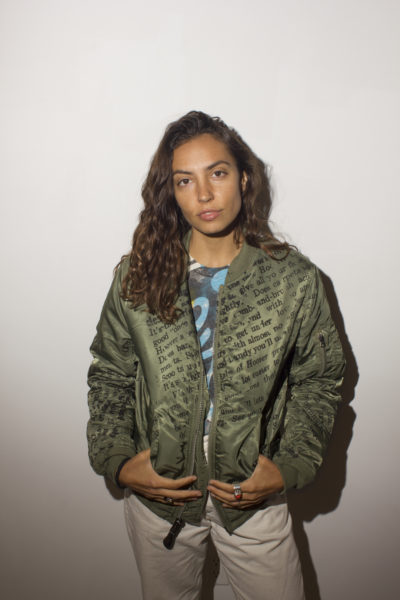 Something that was important in Kenny’s early career, along with contemporary and friend, Keith Haring, was for work to be approachable, including monetarily. When it came to Haring, “it was all about accessibility,” said Kenny. “Whether it was a wall in the street or a t-shirt, it was like, you don’t have to be a millionaire to get a piece of Keith Haring. And you know, I shared that with him.” That philosophy continues to this day. “You can’t have very high-priced items for everybody,” he said. “And that’s why t-shirts and toys and things like that are great, because you might not be able to buy the painting, but you can definitely buy the t-shirt. So it’s about accessibility.” 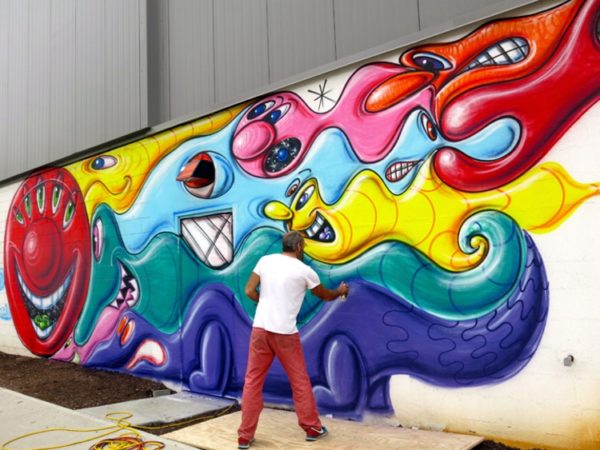 Much of the proceeds from the sale of “Scharftees” will be donated to charity. According to Malia, “some of the organizations we have donated to in the past include the NRDC, Islamic Relief USA, The Syria Campaign, The Hispanic Federation, The Nature Conservancy, Standing Rock, The Sierra Club, and children in the slums of various African countries that we have direct connections to, for their schools and healthcare.” So while the Whitney Museum, which sits across the street from Allouche Gallery, may have had a rich patron donate the very valuable Scharf painting,“When The Worlds Collide”, for display, most people are more likely to be able to afford one of the electrifying “Scharftees”, at much more, as they say, popular prices.