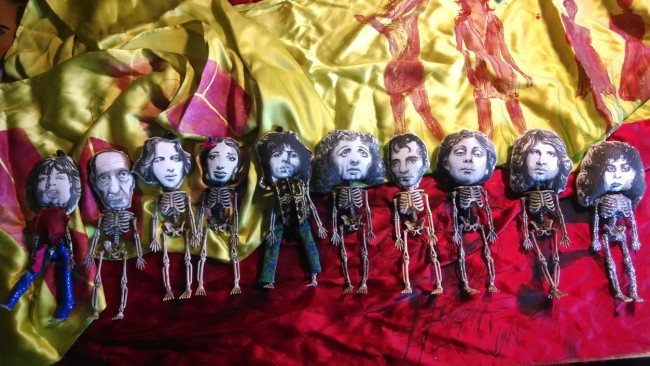 It’s strange when someone hones in on a particular influence in your body of work that you’ve consciously or unconsciously imbibed. Whether you’ve felt profoundly moved by some specific cultural element at some point in your life, or, sandspur-like, it’s attached to your rump in the wilderness and you only noticed it when you thought that you’d picked it off – something that has stuck in you, likely still sticks somewhere. Try saying that last bit fast, 3 times, with a gobstopper in your mouth.

Last year, Emil Memon (artist, curator and musician) told me that he was producing a show with Kyoko Sato Ono (curator, currently organizing a major exhibition between the Metropolitan Museum of Art New York, and Metropolitan Museum of Art Tokyo) at the Nippon Gallery in NYC, and asked to feature some of my artworks. I readily accepted, and it was even more exciting because even though this is not technically the first contemporary art show to ever be hosted there, (most of the exhibitions at the Nippon Gallery, are in fact, about traditional Japanese arts,) it is the first to address the influence of Japanese culture on contemporary and conceptual artists who originate from far reaching corners of the globe, who now find themselves mostly living and working in New York City. Founded in 1905, by Jōkichi Takamine, (a famous Japanese chemist,) the Nippon Gallery, (on the first floor of the historical Nippon Club on 57th Street, right across from Carnegie Hall,) until now, had only ever exhibited works of art made by Japanese or Japanese rooted artists. 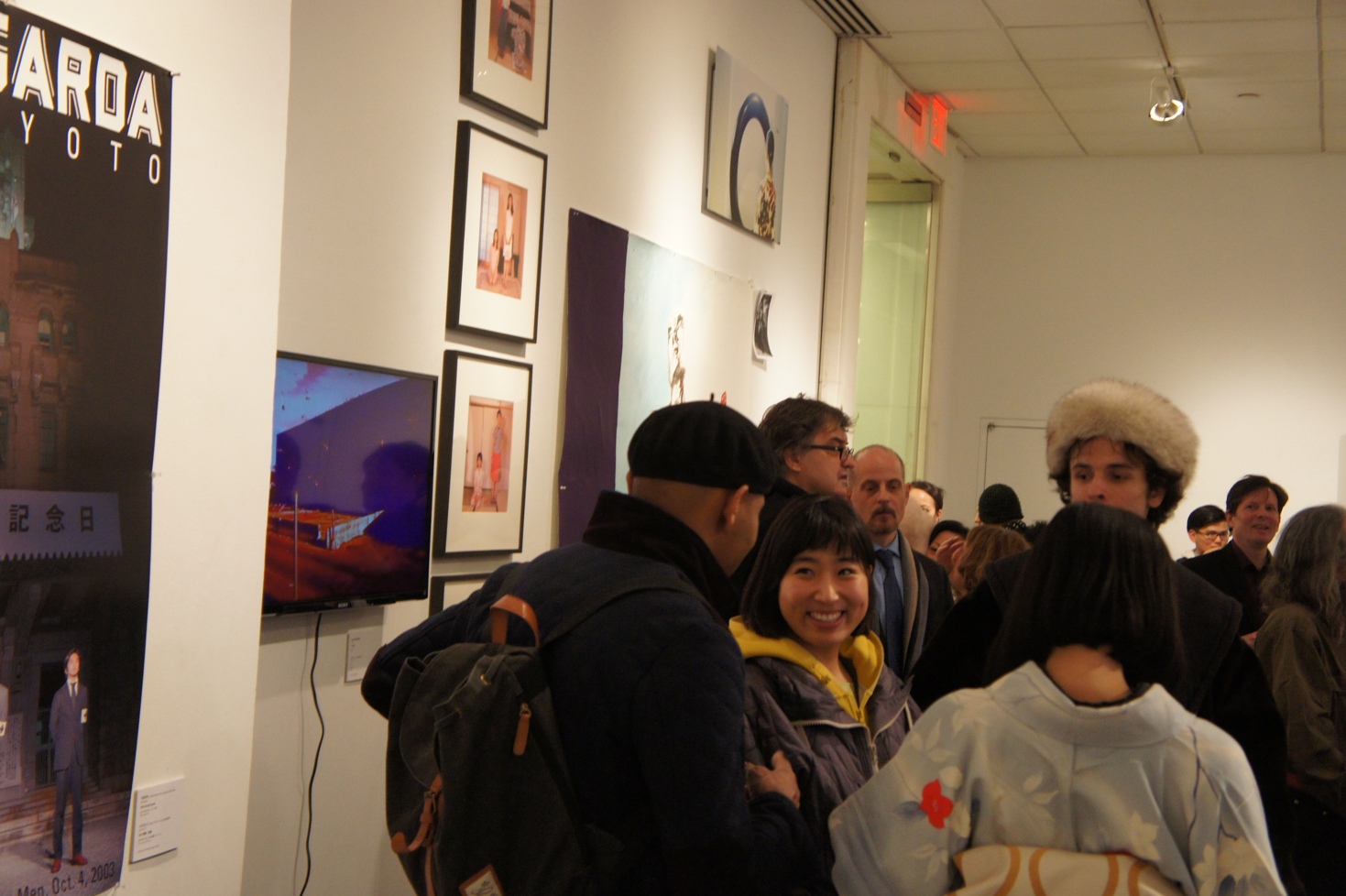 The work in this exhibition, “JAPONISM IN CONTEMPORARY ART,” has been created by internationally diverse artists, and provides an interesting discourse. Pieces that I’m quite drawn to include a large photographic print by the Slovenian artist collective, IRWIN, which features an image chosen from a fascinating project of socio-political nature, called “NSK Garda.” There’s a beautiful work by Wolfgang Staehle, made from unspooled reels of VHS tapes bound up to create a cross hatched wall hanging, and several photographs by Noritoshi Hirakawa, from his series, “I am the Mother and I am the Daughter,” which are both amusing and unsettling. “Endless,” a video performance piece by Mai Ueda, is meditative and captivating, and I enjoyed returning to the playfulness and honesty expressed in the large self-portrait by Iara Celeste Diaz. Also, the musical styling’s of Danny Chavis, who is a multi-talented musician and visual artist, were shared at the opening ceremony and he is also scheduled to play the closing ceremony, on March 6th, 2014. 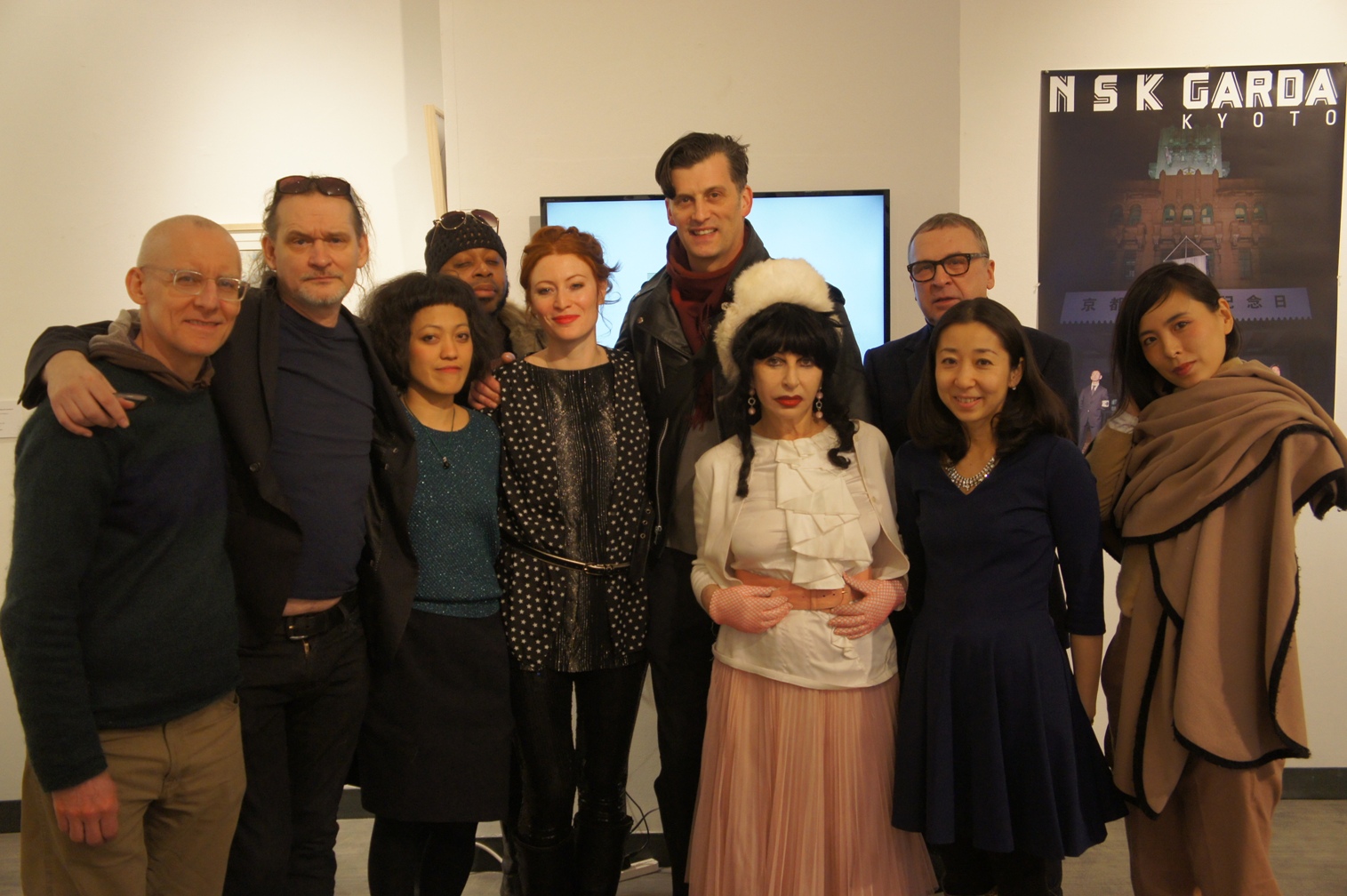 Kyoko and Emil had a unique take on the artwork that they chose for this show. Some indicators of Japanese culture are not instantly recognizable or obviously revealed to the viewer, but for me, that’s what makes the gallery going experience more rich and nuanced. I’ve got 3 featured installations on display, and in one of them, “Out Tonite With Anthracite,” after the opening night, I noticed that bits of the coal and moss which in part, comprise it, were missing from the original arrangement. At first I joked about the importance of keeping goats off the premises, and was slightly miffed about this extraction, which I’ve since had to replace and re-arrange, twice. On reflection, I’m glad that some curious little fingers (one side of the vitrine is open – at toddler level..) wandered around to take something real and raw home with them, from the show. 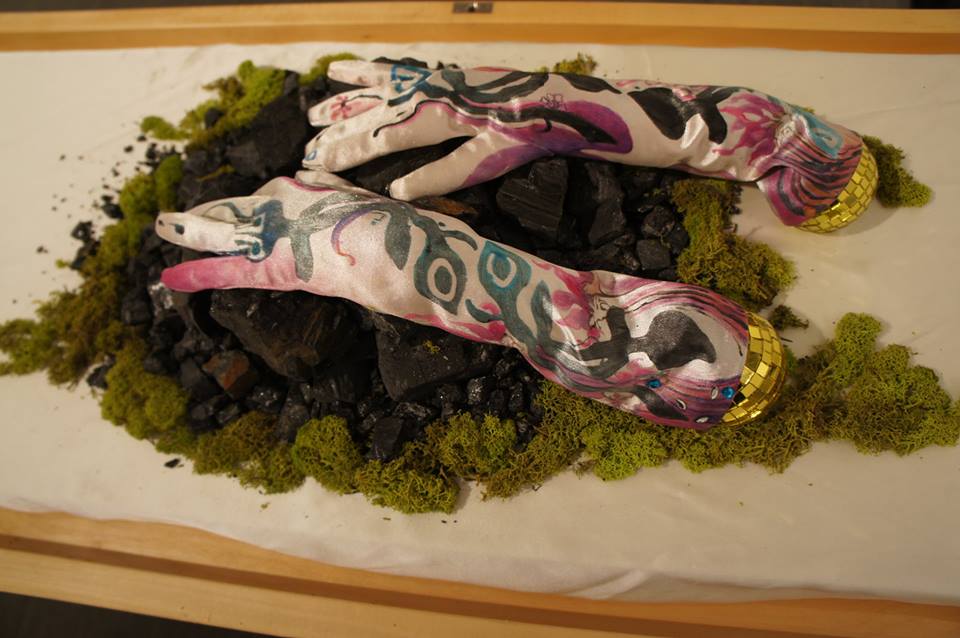 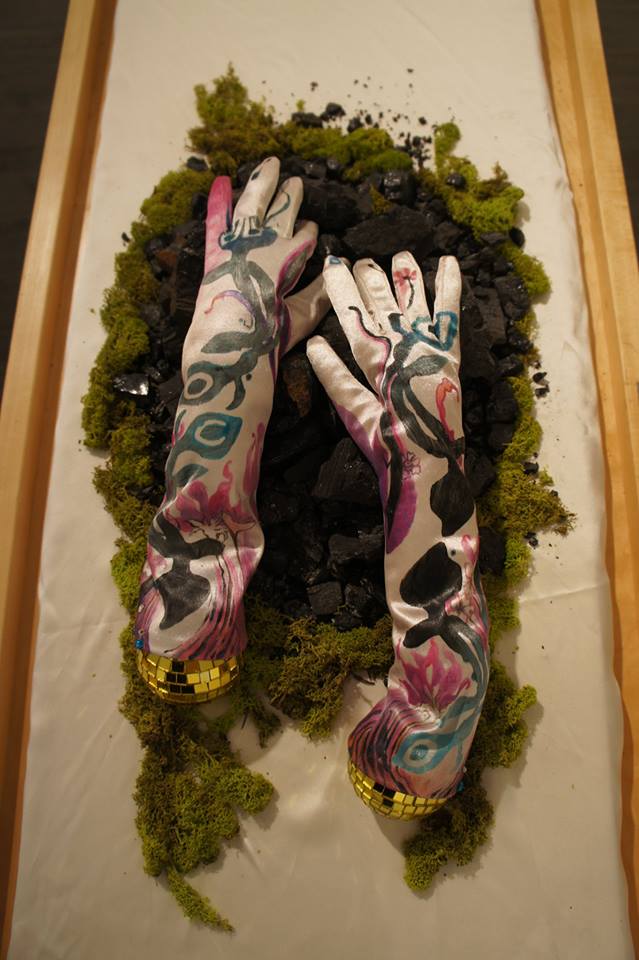 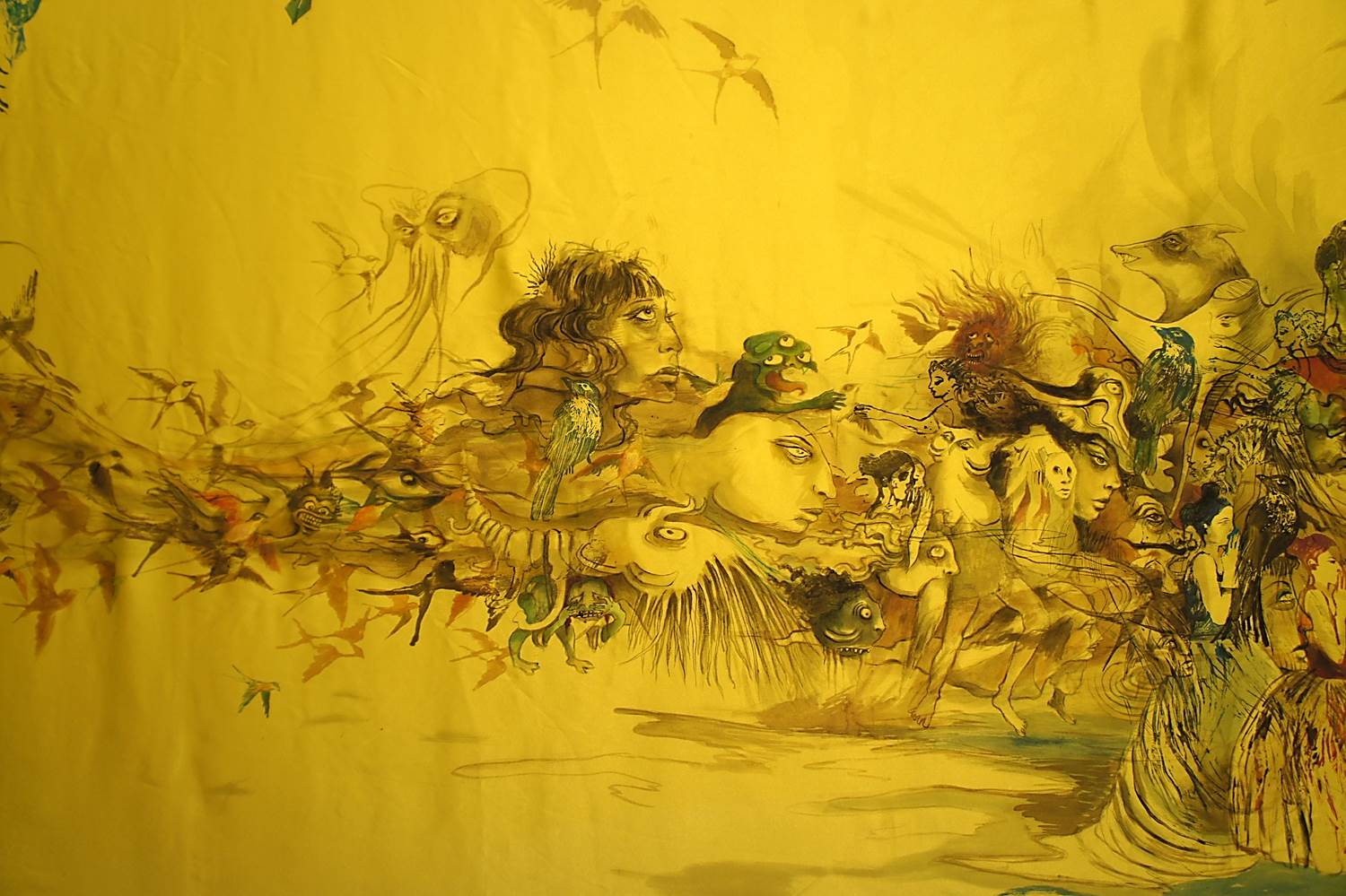 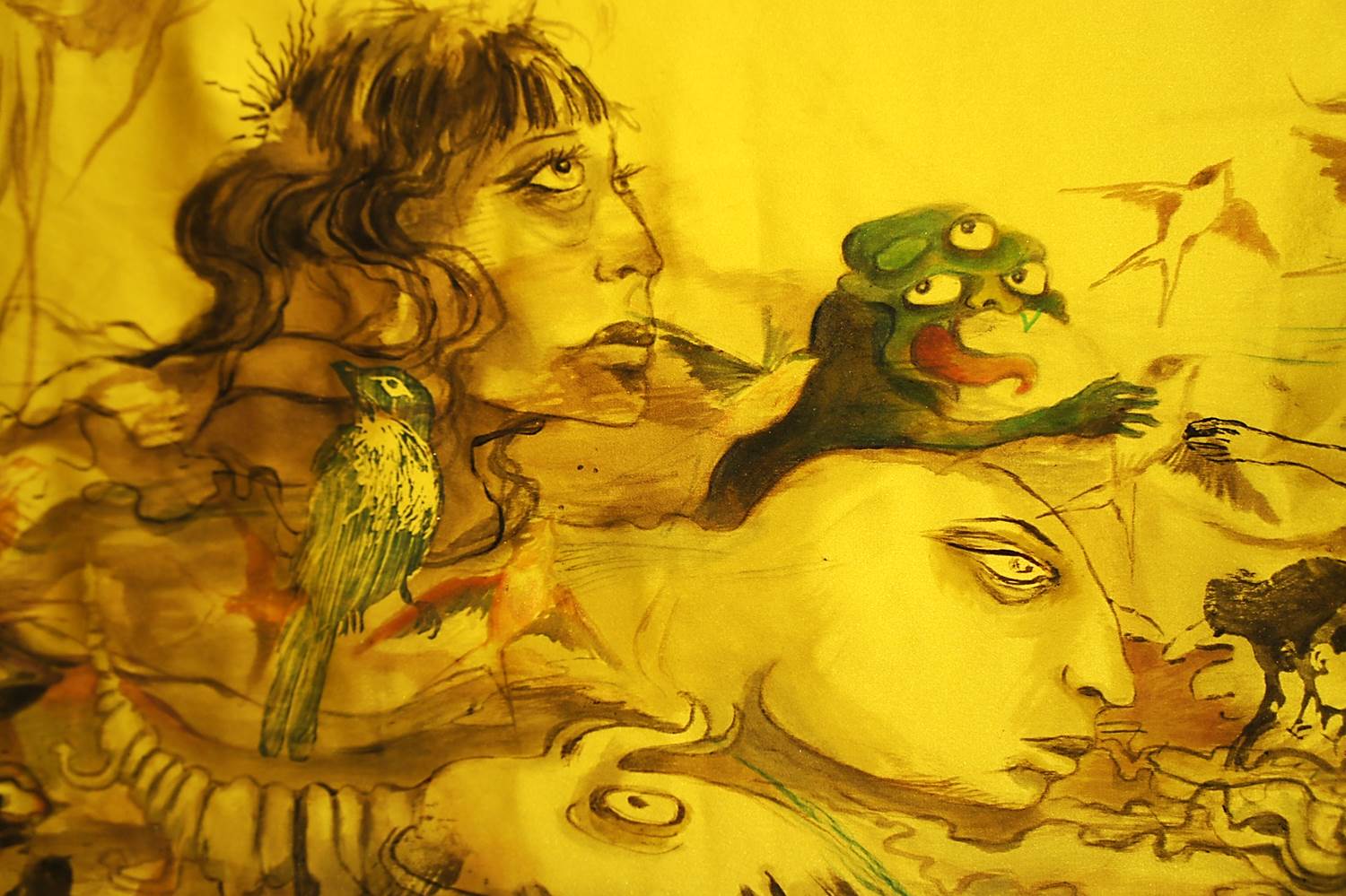 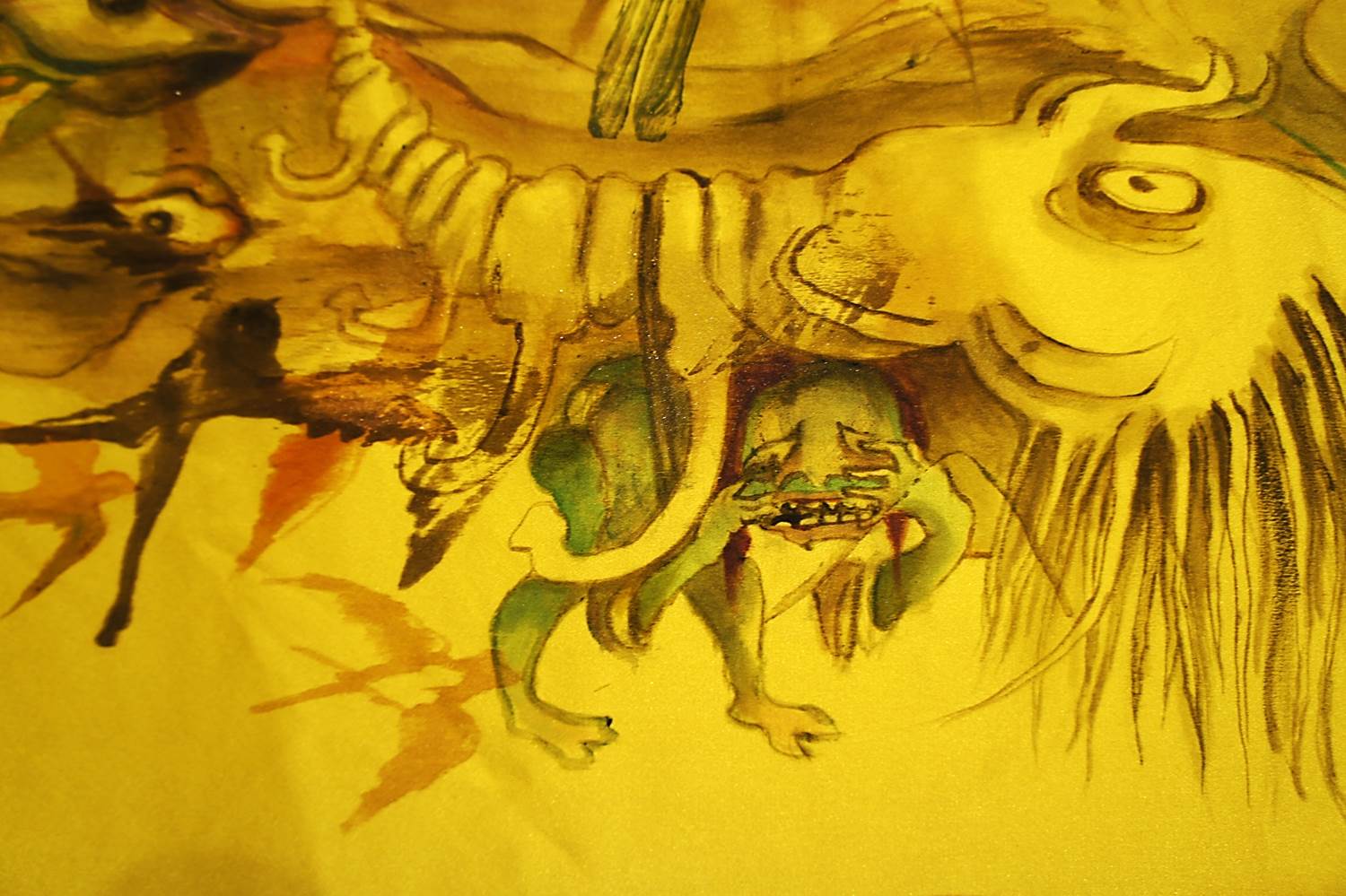 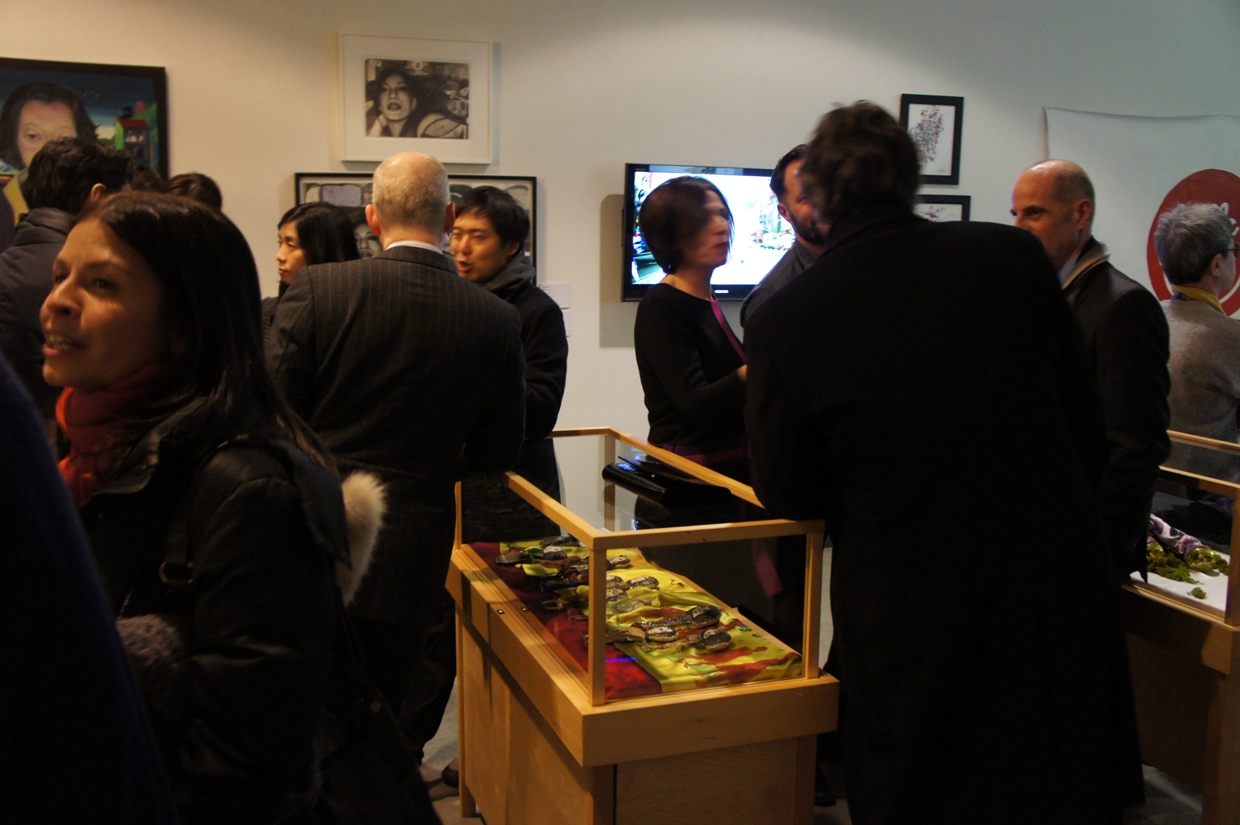