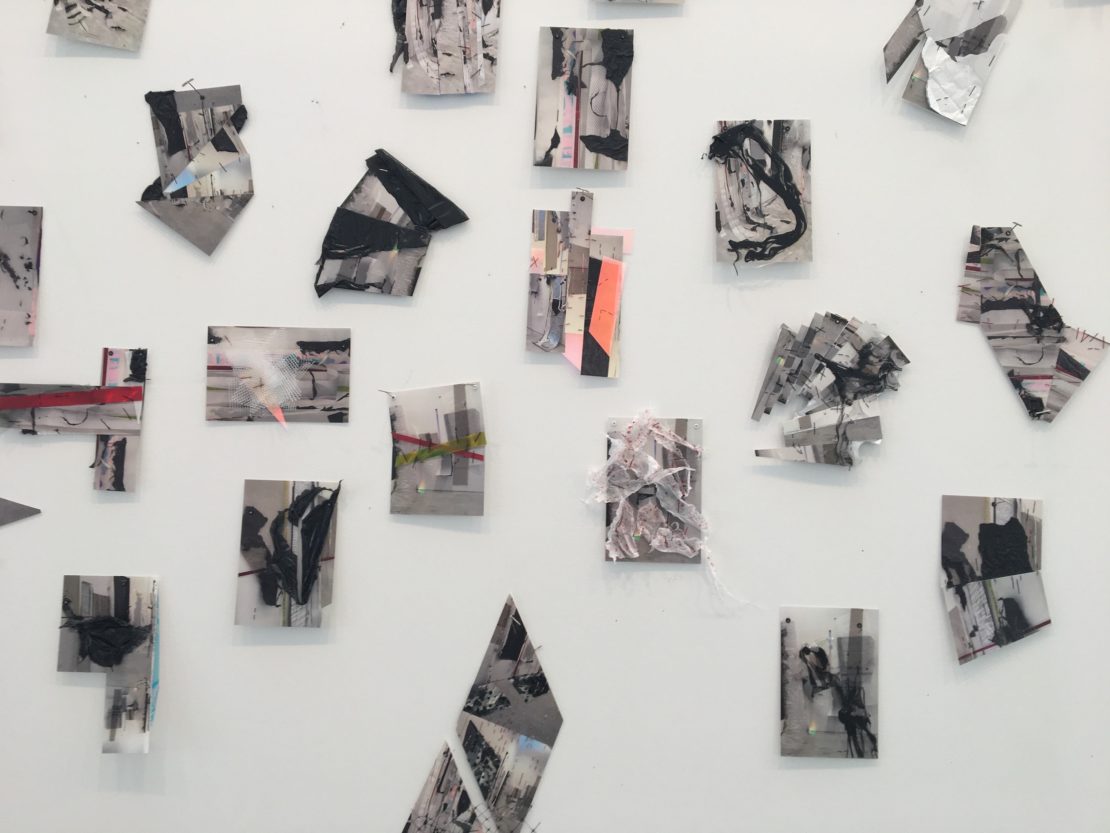 Undercurrent is pleased to present Uneasy Terms, a solo show by mid-career artist Gelah Penn. The exhibition will feature a 33-foot-long site-responsive installation, as well as monumental constructed drawings and small collages from two of the artist’s ongoing series, Stele and Notes on Clarissa (Volume I).

Throughout her career, Gelah Penn has challenged artistic conventions and the traditional concept of drawing by utilizing synthetic, lightweight materials such as Mylar, lenticular plastic, plastic garbage bags and mosquito netting. Her subtle and sophisticated wall works and installations stand out for both their unusual fragmentation and formal intelligence.

Working at the intersection of drawing, painting and sculpture, Penn’s process reflects an optical and surface-oriented sensibility, favoring the visual language of modularity and materiality over narrative composition. Her analytical approach to abstraction is heavily informed by physicality and form, with an emphasis on the visual dynamics of the configuration rather than a literal narrative resulting from those shapes and structures.

Penn’s work is also informed by her interest in film and fiction. In Notes on Clarissa (Volume I), presented as a 21-foot-long installation in Undercurrent’s main space, Penn has created a series of 99 collages derived from 4 x 6-inch exhibition cards of her recent installation, Ebb Tide, at ODETTA/Chelsea earlier this year. Notes on Clarissa is an ongoing project based on the 18th-century epistolary novel Clarissa by Samuel Richardson. The story is told primarily through the correspondence between four principal characters, and details the drama of a young woman’s seduction, betrayal, violation and death. Each collage corresponds to one of the letters in the four-volume novel. This considered manipulation of exhibition ephemera highlights Penn’s interplay between materials used in her work and the photographic representation of that work.

The artist’s large-scale drawings, the Stele series, further exemplify this concise yet nuanced dialogue between materiality and abstraction. These works are constructed from synthetic materials chosen for their malleability as well as their ability to activate light, creating a rich variety of shadows evocative of the low-key lighting characteristic of film noir.

Prologue is a site-responsive installation along Undercurrent’s dramatic entry stairway wall. Penn’s installations are developed off-site, then readjusted in situ. They deftly adapt, rather than execute, a plan, responding to the architectural parameters and curveballs of a particular space.

Penn’s phenomenological approach to her work emphasizes atmosphere, form, and visual experience. In this exhibition, her lifelong examination of these issues yields a rich and exhilarating perceptual dialogue between material and space.