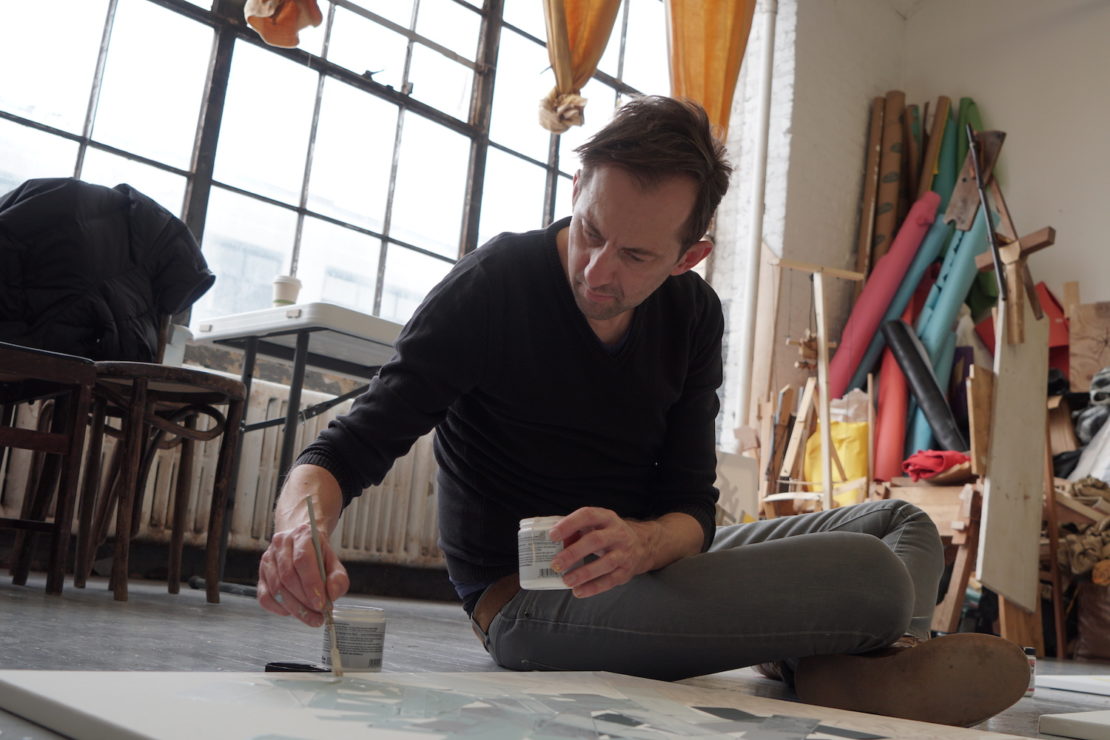 The French artist and expat, Philippe Halaburda, arrived in the United States on November 6, 2016, looking to take his artistic career to new heights and clearly, new places. This was, of course, just two days before Donald Trump would shock the world and win the presidency. As if moving to an entirely new country isn’t stressful enough.

Halaburda had been living in the South of France (Aix-en-Provence, about 20 miles north of Marseille) for 16 years. This came on the heels of a short stint in Switzerland and a stretch in Paris, where he worked as a graphic designer. He now lives in Bushwick, a short bike ride from his sun-lit studio in the 56 Bogart building.

“It was never my dream to come to the US,” says Halaburda, 47, over the phone, “but I knew I didn’t want to spend the rest of my life in the South of France.” 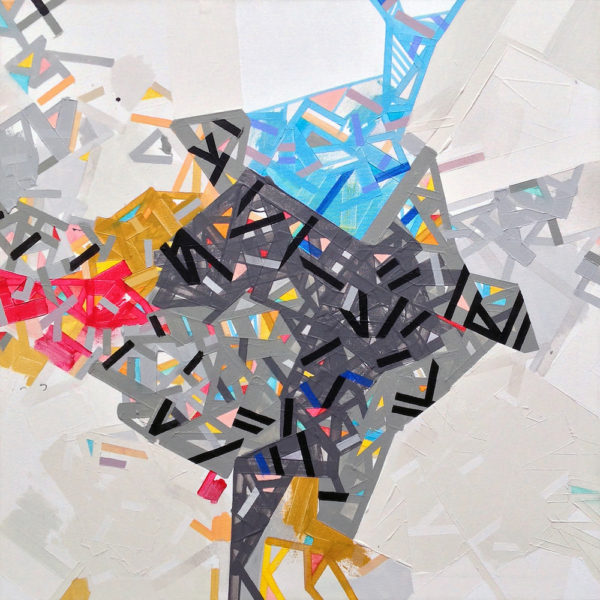 In his early 20s, Halaburda did quite a bit of painting, but mostly as a hobby. He was outside in pleasantly gratuitous nature, replete with her many curves and an abundance of light. “The light in the South of France is very specific,” he says, reiterating what many astute art history lovers seem to infer. Halaburda mentioned that he had always been “searching for the light.” But where this was the main mission behind the painting and also his notable photographic pursuits, this search may have moved internally.

With increased introspection and maturity came more abstract, geometric forms, an expression of a restless mind, trapped in the present and reflecting on the immediate environment, itself caught in a spatial hyper-state of chaos and stagnation. With his unique “map compositions,” at once organic, architectural and spiritually précis, Halaburda found himself exploring the nebulous boundary between perception and experience. In the process, he developed a signature aesthetic. “If I’m doing art,” Halaburda begins, “it’s because I feel like I’m doing something different. It’s important to have my own style. I don’t want to do what’s been done.”

On May 2, Halaburda will unveil a solo booth, Spatial representation of emotion, at The Other Art Fair, now in its fifth Brooklyn edition (Brooklyn Expo Center, Greenpoint) and its 37th globally. The fair, presented by Saatchi Art, will be representing over 16 countries around the world. Halaburda will now be counted among their 49 New York-based artists out of 130 total.

It’s been an interesting journey for Halaburda, who could serve as one portal into the larger art fair ecosystem and greater art world, where so much art and so many human art stories frequently get lost or side-stepped, some rightfully so, others, quite shamefully. 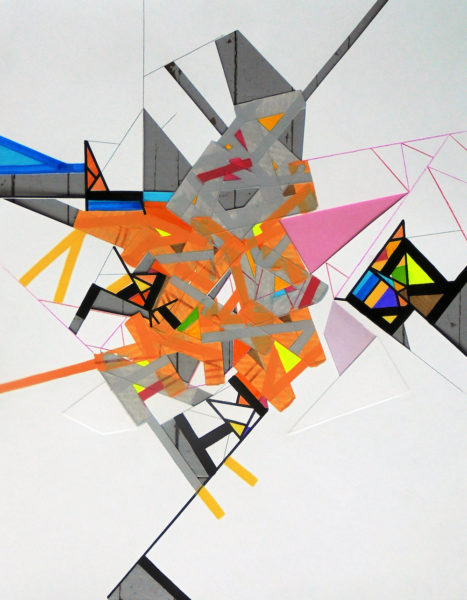 In 2012, an art dealer from Santa Fe, New Mexico stumbled across Halaburda’s website and thought his work would fair well in the US market. A year later, after a handful of meetings with various dealers, the artist met John Wright Schaefer, owner of Peyton Wright Gallery, which specializes in 20th century post war and modern American art. Halaburda stayed with the New Mexico gallery for one year, where he, “…Did some exhibitions, made some sales, got a good cut.”

At the time he was the first living artist to be selected for representation with the gallery in over a decade, perhaps because his anti-click bait work can feel more “modern” than “contemporary,” meaning, less figurative, more emotional (form, color), and certainly less didactic.

Halaburda would visit the United States roughly twice a year only to see some art world relationships fade before deciding to make the leap across the pond.

“Coming to New York changed everything,” he says. “I came by myself and with no connections. I was broke two years ago. I became a starving artist as they say. It was intense, but I was able to manage.” 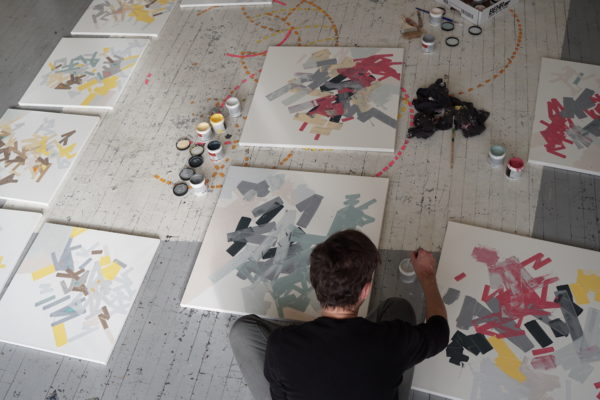 Philippe Halaburda in his Brooklyn studio.

Over the last two years, he’s been doing works of acrylic and felt pen on canvas and paper, incorporating elements from various artistic schools or “isms” (Constructivism, Suprematism, Cubism, Futurism). “When I moved to NY, I kept my style, but it’s become more chaotic, linear, geometric,” he says. “I don’t use curves anymore because I don’t see curves in the city. I am inspired by the topography and cartography. I break the grid to create my own interpretation of New York.”

Halaburda has recently been breaking into the third dimension, with his floating plexiglas installations, which also feature his algorithmic, bacterial rectangles, scratches and splashes-tiny bodies or nodes floating over a minimal web of architectural lines or strings. However, paint is often replaced by strips of tape. 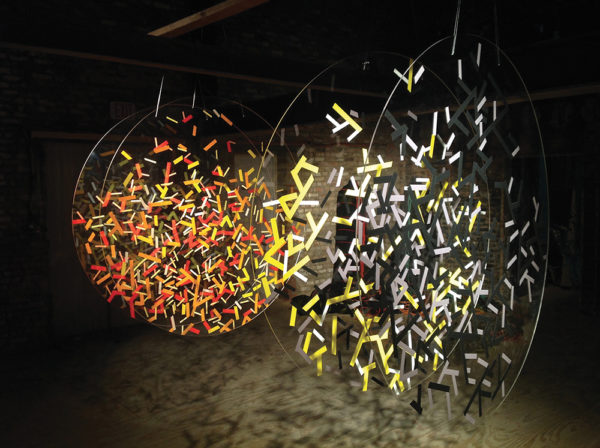 A work of this nature was recently featured in FLOW, an immersive art experience in a previously inactive space, now Midtown’s The Bellewether, which ran from March 4-11. This was part of creative agency The Vanderbilt Republic’s partnership with Circular City Week New York, an initiative that brings together creative professionals across the globe to transform industries and redesign urban living. In many ways, Halaburda’s installation-four large plexiglas circles riddled with his geometric animaculai, which cast shadows across space like falling (in extreme slow motion) leaves or confetti-acted as a visual representation of this project’s larger goal, while alluding to our interconnected yet all too disembodied planetary relationship.

“I use primary colors in the works,” notes the artist, recalling the Russian avant-garde artist and founder of Suprematism, Kazimir Malevich, who also preferred to work with simple materials and pure forms. “If you wear a red shirt or blue jeans and you go in a certain position behind the Plexi, it can change the image and change the art. Work on paper or canvas can be flat. I like to bring people into the art, make them active.” 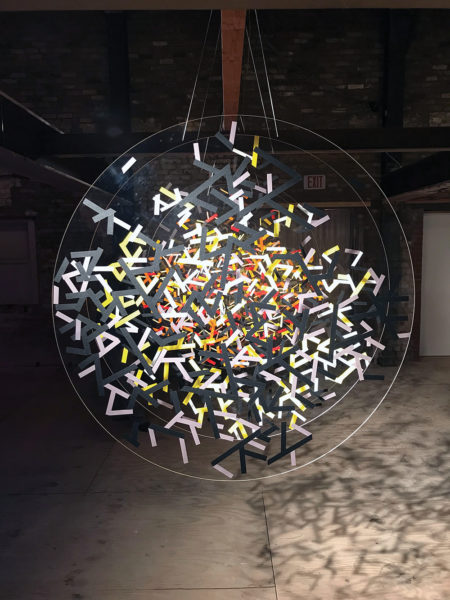 Outside of showing in a ChaShaMa fundraising event in June, Halaburda doesn’t know what’s next; only that he doesn’t want to go back to France. “I knew I had to go somewhere else,” he says. “It’s intense here, but it’s been very positive. My work gained meaning and deepness. As a person, it’s the same thing. My limits, what I could do, what I would accept. In France we don’t have this melting pot. It’s been a great experience.”

A enduring glimmer of the “American Dream” perhaps? “It’s a small flame, still active and I can feel it,” says Halaburda, speaking primarily to his artistic drive, but also the light within a dwindling notion of Western enlightenment. “And I don’t want to give up.” 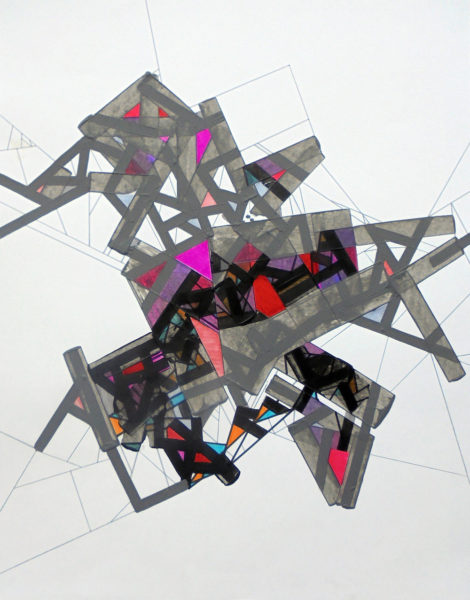