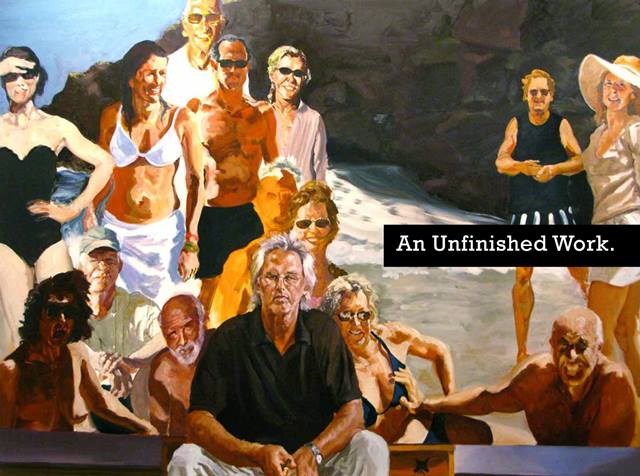 Smile for the camera. American artist Eric Fischl paints a snapshot of the American dream in his latest series of portraits. Sun-kissed faces and half-naked bodies huddle in the sand like the photo album from a family summer vacation. Every person stares back at the camera with joy and delight as if to create a moment that they want to preserve. Eric Fishcl taps into one of life’s happiest moments with insight and sensitivity. He paints his subjects in a way that they would want to remember themselves.

Eric Fischl is not an entirely fresh face in the art world. His work has been featured in many notable museums in America and throughout the world including, The Museum of Modern Art and The Whitney Museum of American Art in New York City. Eric Fischl was first discovered on the New York art scene in the late 1970’s. He was known for his return to figurative painting during the period known as Neo-Expressionism. His paintings often featured the seeds of bad behavior in domestic American life with strong sexual themes. Fischl further explores a similar subject with his more recent works that magnify a modern family tradition.

One piece that truly stands out among his latest paintings is Sophocles and His Family at the Beach (2009), 84 x 53 inches, oil on linen. The painting depicts a candid scene of a family of four including a middle-aged man and a younger woman with two pre-adolescent girls in bikinis. The first girl holds the woman in the foreground with a strong clasp. They each have a lean figure that accentuates their well-toned, nearly naked bodies. The young girl shoves her face into the woman’s bare stomach. The man, presumed to be the father and Sophocles himself, lingers in the background. He smiles at the second young girl with warm eyes; she winces in the sun. The image looks strikingly familiar as if it were a portrait of the Kennedy family on their annual summer vacation. The closeness of the figures appears almost unhealthy and indecent. Their seemingly innocent play quietly suggests a sexual connotation. Their actions and expressions look pleasant and yet, physical and full of desire. The scene carries a sense of longing: a girl’s wish to grow up, a couple’s urge to be young. 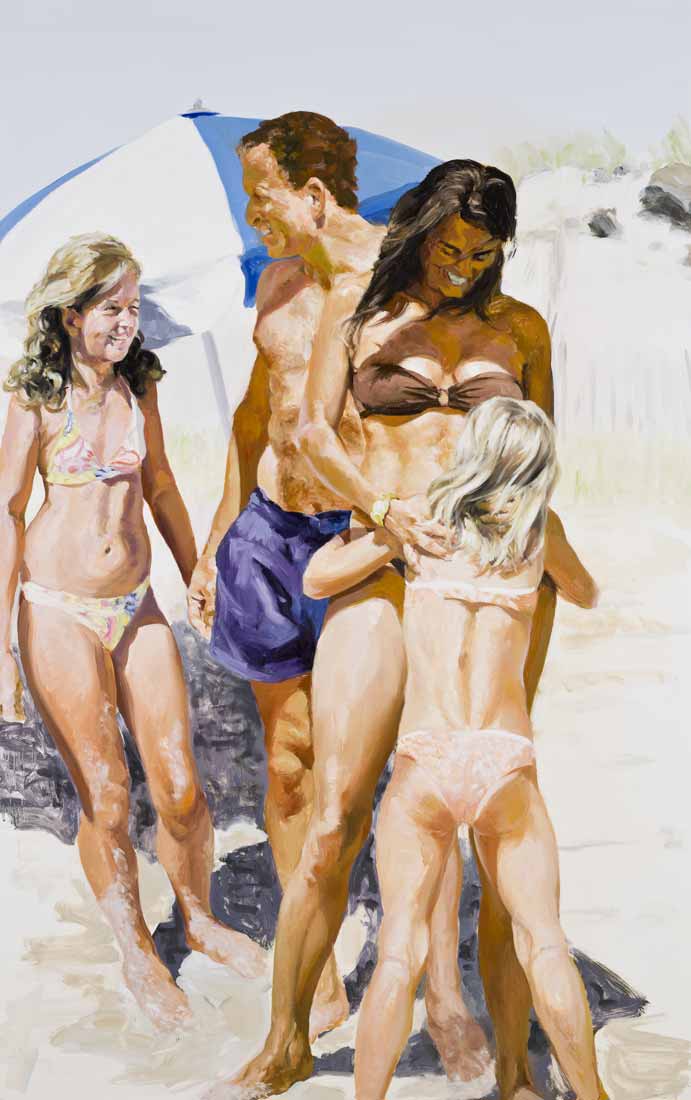 Sophocles and His Family at the Beach, 2009. (Courtesy of Erich Fischl.)

Saint Barts Ralph’s 70th (2009) 96 x 108 inches, oil on linen, marks a similar painting in the same series. A group of friends or family gathers in the sand with a cheerful demeanor. Seven smiles stare into the nonexistent camera. The title suggests a celebration has occurred for Ralph’s 70th birthday party. The man in the navy blue T-shirt stands out as one of the main figures and could easily be interpreted as Ralph, a handsome older man with a piercing grin. At his side, stands an older woman with curly hair and circular shades. She wears a two-piece bathing suit that leaves little to the imagination. Her sagging breasts dangle freely, almost completely exposed. Her stomach appears well toned like a retired bodybuilder’s six-pack. Her string bikini barely covers her lower half. She represents a prime example of aging female sexuality, as opposed to her younger female counterparts wearing considerably more modest beach attire on the left side of the frame. 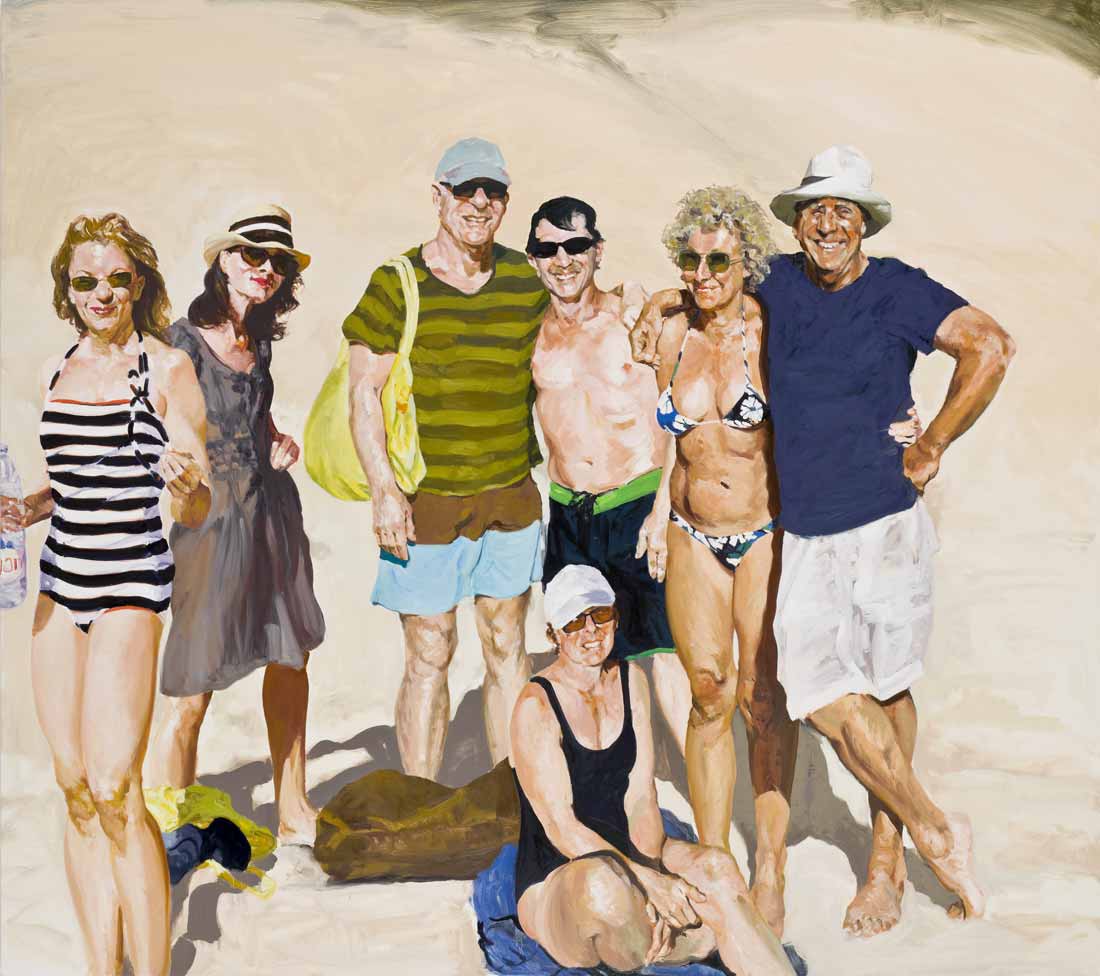 Ralph appears fully content with his position and his place: full of good friends and great sex. The picture paints an image of success. At seventy years old, don’t you wish you could be like Ralph celebrating your birthday on a tropical island with your closest loved ones? Yet, posing for the camera can be misleading. The smiles last as long as the flash. Once the photo has been taken, everyone returns to their normal selves. The painting only exudes a veneer of happiness, instantaneously leaving the joyful moment frozen in time.

Another painting within this category is Self-Portrait: An Unfinished Work (2011), 203 x 274 inches, oil on linen. The painting contains a frame within the frame. Eric Fischl paints a portrait of himself in front of another painting filled with more proud, fortunate beach goers. His rendition of himself matches the other subjects in form and style. The painting in the background rests on a small easel against a grey wall. Eric Fichl holds a paintbrush in the center, almost entirely disaffected by the work behind him. The figures in the painting stare back at the viewer with the same jovial intensity as the other pieces. Smiling faces and healthy lean bodies glow in the warm sun. In the bottom right corner of the frame, an older man extends his arm to touch the breast of an older woman on the left. He firmly pushes against the woman’s soft lump of skin. She smiles as if nothing out of the ordinary has happened. Both parties stare at the camera with an innocent smile. The quiet whisper of sexual suggestion gets a little louder. Erotic urges bubble under the surface until they cannot be ignored. 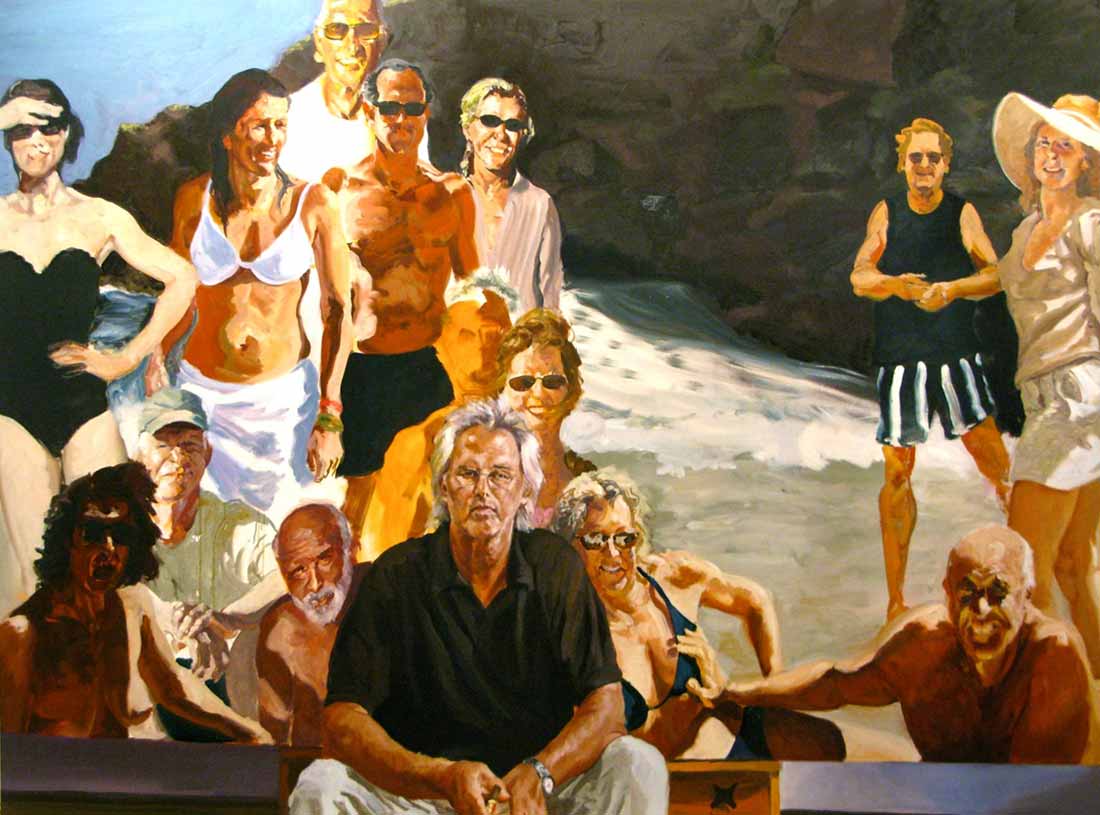 Self Portrait. (Courtesy of Erich Fischl.)

The most fascinating part of the painting is the portrait of Eric Fisch, who chooses to include himself along with the rest of his subjects. The result shows the artist in a new light, humble and fragile. He declares that there is no difference between him and the many people he paints. Whatever judgment or assumptions the viewer wants to project onto the other figures must include Fischl as well. As the artist turns the paintbrush on himself, he puts his own legacy at stake. Expensive summer homes and mature sexual play fill the lives of the people on the beach, while Fischl sits alone with his work. How will Eric Fischl be remembered? How will Eric Fischl remember himself? Perhaps the piece speaks to the limitations of creation. A painting will always remain a painting, a photograph will only ever be a photograph. Eric Fischl takes on many new challenges in his latest work, but above all, he takes on the search for himself.