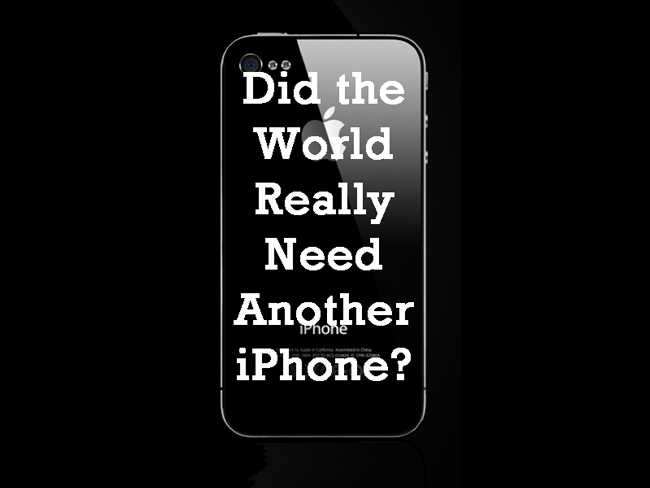 When Alexander Graham Bell invented the telephone, he likely envisioned a new era of communication, where important messages were delivered in a convenient time span, where distant family members were only a phone call away. Sure, he probably had a few dollar signs in his eyes, but I doubt he didn’t rub his hands together maniacally at the thought that a hundred years later consumers would be camping outside of a big glass cube on 5th avenue for the newest model. But I know what you’re thinking: ‘Why is he yammering on about some innovative dead white guy?’

“Now, this article is not a metaphorical finger wagging meant to shame you into caring about the issues. This article is an honest inquiry that seeks to examine not only our infatuation with Apple’s latest product but our approach the life in general. Are we indeed consumed by our own consumption?”

Since we’re starting off our Isms month with ‘materialism’ here at Quiet Lunch, I couldn’t help but think about the almighty iPhone 5. Ever since its inception in 2007, the iPhone has been one of the hottest commodities on the market; it’s capable of everything from video chatting to helping you find your way to a new restaurant — hell, I’m pretty sure it even cures cancer. I’ve never owned an iPhone, nor have I ever had the pleasure of waiting on line for a week for one, but after having witnessed my friends clamor for each new generation, I feel like I’ve owned the phone the whole time. 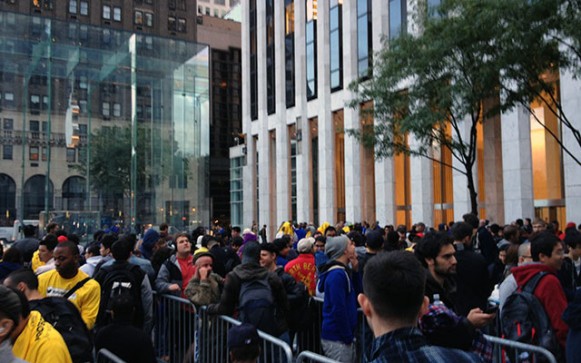 Honestly, I never saw the point of attaching oneself so intensely to a piece of technology. Okay, at first I did. I thought, ‘Wow, a phone AND an iPod. It’s the best of both worlds!’ But somewhere along the line, the fixation just got ridiculous — and it’s not like it’s the iPhone’s fault. The truth is, the economic climate has changed drastically since 2007. Various sociopolitical and socioeconomic issues have made their way to the forefront since then and the whole “OMG! A new iPhone!” ordeal just seems obnoxious and irrelevant.

“The need to acquire things that will enrich our brief existence on this earth is only natural. However, materialism, which is a belief that physical matter is the only or fundamental reality, is not.”

I have nothing against Apple, their products, or the late Steve Jobs. My issue is with us, the consumers. In a climate where rebellions are more rampant and class distinctions even more apparent, should we know better, shouldn’t we know better than to let ourselves be consumed by consumption? Shouldn’t we be able to see that our priorities ought to lay elsewhere? Shouldn’t we be more focused on educating our youth and not just training them to work and consume?

Some of us may have not seen the point of the Occupy Wall Street movement. It looked disorganized and was postured by the media as a ragtag band of malcontents. But at the heart of this supposedly ill-fated movement was a fight against unchecked greed. It was the result of a long fought battle that finally culminated in an outburst of protest.

OWS is not the only indication, let me reference to something more present. As of September 2012, the U.S. income gap between the rich and the poor recently hit a new high. In other words, the rich are getting richer and the poor are getting poorer. But yet the poor continue to spend.

“Are we doomed to become living machines that only care for the newest gadget and the latest fashion? No. But are we heading down a slippery slope of material obsession? Yes.”

The need to acquire things that will enrich our brief existence on this earth is only natural. However, materialism, which is, according to Merriam-Webster, a belief that physical matter is the only or fundamental reality, is not. When I see us whipping ourselves into a frenzy over the new iPhone while more important issues swell and fester in our communities, I begin to question whether we will really ever come to the realization that materialism is not a sustainable way of life.

Are we doomed to become living machines that only care for the newest gadget and the latest fashion? No. But are we heading down a slippery slope of material obsession? Yes. When it comes to politics and issues that affect our daily lives, materialism is nothing more than a distraction. In light of materialism, more important and politically relevant issues are ignored–education has taken a backseat; gay rights have taken a backseat; women’s rights have taken a backseat; the victimization of the poor and lower class has taken a backseat. Yet despite these injustices, possessing the newest version of the iPhone is what remains at the forefront of people’s minds.

This is bigger than the iPhone. The iPhone is only one drop in the golden bucket of materialism. The truth is, we are venturing into dangerous territory, a wilderness where the shiny things take people away from the things that truly nourish their mind and spirit. It’s an atrocity when teenagers can tell you what kind of car they would like to drive before they can tell you which college they hope to attend. It’s a travesty when young adults can rattle off all the features on their new phone but cannot name one member of the Supreme Court.

I am not protesting or shunning well marketed technological innovations. During our time, which said to be the most sociopolitically turbulent time since the 1960s, I am simply asking if the world really needed another iPhone. Or better yet, being that the iPhone is not the sole cause of our troubles, isn’t it important for us to shed our culture of materialism now more than ever?