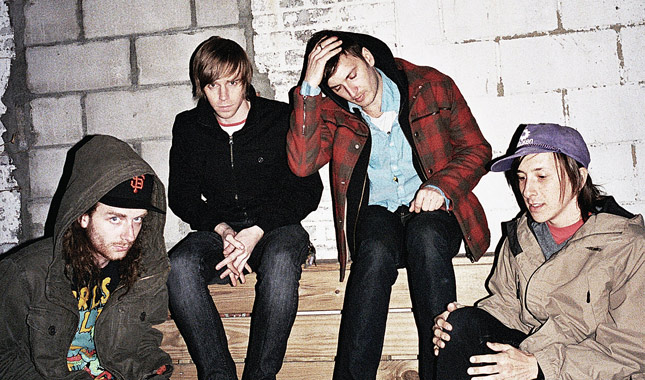 The first time I went to the Glasslands Gallery I almost walked right by it. It’s not because the building is an unmarked warehouse on an otherwise dark and residential street (I’ve become accustomed to such things in Williamsburg), but rather because the people gathered outside for the show on Dec. 13th weren’t as stereotypically hipster as I expected, given all of the indie blog buzz Bear Hands have enjoyed since their 2007 EP, Golden. After hearing their set it all started to make sense. Bear Hands isn’t a mere scenester fad. They’re expert illusionists who know how to appear like insouciant punks when they’re really master craftsmen.

Inside the venue, blue walls and cumulus white fluff hangs over the musicians giving the feeling that the stage is floating in the stratosphere. At points that’s exactly where Bear Hands takes you. Their psychedelic airy guitar tones float around unaccompanied, making the small room sound as resonant as Grand Central Station. But before you can nudge your Phish head roommate to spark up a joint, the bass and drums land on the downbeat and everyone in the room starts to get freaky. The venue’s three-foot high wooden stage intensifies the effect of the bass frequencies on your pelvis and you start dancing with that girl who squeezed past you in the weird co-ed bathroom. 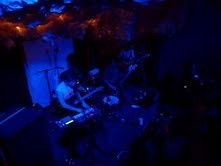 Of course, with so much booty shakin’ going on it can be hard to pay attention to the lyrics and Bear Hands like it that way. In a song like “Tablasaurus,” words are chosen more for onomatopoeia than to get a message across. Don’t let the gritty tabla drum sample trick you into thinking that they’re going to pull a Yeasayer and start referencing Eastern Mysticism. Instead, the rhythmic wordplay is almost nonsensical: “I, the greedy one / manufacturer of the / eye, the cheating come / as affective money.” Whatever meaning can be deciphered here is lost among a sonorous whirlwind of repetition.

Although frontman Dylan Rau apologizes before playing unreleased material, the crowd is just as willing to get down as they are with the older stuff. It just goes to show that when Bear Hands’ new album drops sometime early this year, there will be plenty of listeners having too much fun to wonder how all the sincerity can seem so effortless. As for me, I know a great magician never reveals his secrets.