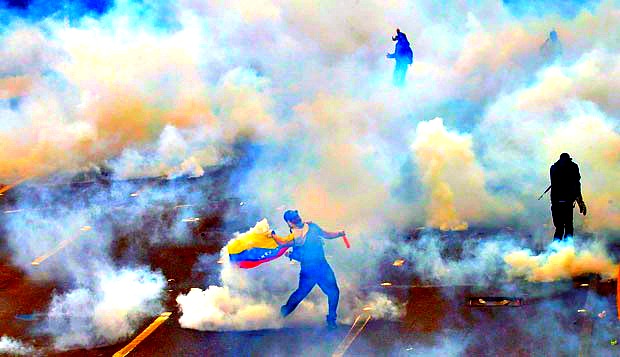 Venezuela is on fire. Literally. Garbage fires permeate the streets of Caracas as pro and anti government forces square off in an increasingly bloody showdown.

You can tell a lot about someone by who they blame for Venezuela’s suffering, especially at the extreme ends of the spectrum. Hard core conservatives see socialism run amok. Conspiracy theorists see the country as a warning about the dangerous, meddlesome reach of the global financial elite.  The reality is less clear cut, but it’s just as sad. This is a story that’s long on victims and short on heroes. The Venezuelan people have been buffeted between right wing bullies and left wing demagogues for decades and have nothing but disarray to show for it. 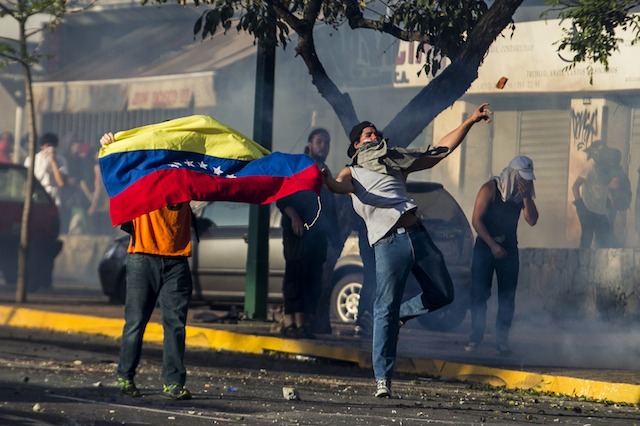 The country has been in a downward spiral since the 1970’s, when it had the highest standard of living in Latin America. Crime rates are staggeringly high, and by some measures they have quadrupled in the last 15 years. Venezuela is currently among the world leaders in murders, kidnappings, carjackings, and robberies.

The economy is in shambles. Inflation is out of control, and shortages are so prevalent that even the well-to-do are learning to do without. The only Venezuelans doing well these days are the ones that had enough money to escape to Miami.

The election of Nicolas Maduro in April 2013 appears to have ushered in a near-total collapse of Venezuelan society and institutions. He had been Vice President until a month before, when he ascended to high office on the death of his predecessor Hugo Chavez. His election was viewed as fraudulent and illegitimate by large sections of the population.

To bolster his authority he proceeded to jail opposing politicians and curtailed press freedoms. Leopoldo Lopez, the opposition leader he defeated last April, is currently being held on charges of murder and terrorism. His real crime, though, is attempting to oust Maduro from office.

And this is where our story gets interesting, because while Maduro has been both brutal and brutally ineffective, the country’s corporate elite are most definitely in the midst of a political power grab — one that they’ve been plotting for over a decade. Lopez himself was one of the leaders of the failed 2002 coup against Hugo Chavez. And no one this side of Osama Bin Laden stirs up stronger emotions in people than Hugo Chavez.

Even after his death Chavez casts a very long shadow over Latin American politics. He was an old-school Socialist, in the best and worst possible ways. That is to say, he paid lip service to empowering the little guy, and did provide the poor with some relief; but he also ran the country into the ground while enriching himself and his friends. Violent crime surged on his watch. Infrastructure crumbled. The economy became substantially less efficient and competitive, and the country even began experiencing food shortages.

Now let me contradict myself: He was not half the monster he was made out to be. Venezuela’s elite were going to hate anyone who wasn’t one of their own. His principle crime, in their eyes, was failing to kiss their asses sufficiently. It’s reminiscent of Wall Street’s anti-Obama hissy fit in 2012.  Many Venezuelan tycoons did quite well under Chavez, but he hurt their delicate feelings.

Chavez spoke up for the dignity of common people and he lifted nearly 25% of the population out of extreme poverty using oil revenues. Venezuela was a deeply unequal country before he took office; it was run by the rich, for the rich, while hand-to-mouth existences were pitifully ordinary.

More importantly, he was willing to defy Washington and the IMF. As long as he was pumping enough oil to keep government coffers filled, he was free to make powerful enemies in the world of high finance. This made him a hero among large proportions of what I’ll call the conspiracy theory community.  I’m not referring here to anyone who is distrustful of global finance (I presume that’s most of us), but the smaller subset who sees a tiny corporate elite as the source of all the world’s problems.

Here in America we are all well acquainted with the thinking of the corporate elite, since they dictate the socially acceptable limits to right and left-wing opinion. Their disregard for Chavez is well known. But I was quite surprised at just how adored Chavez is by the “Illuminati controls everything” crowd.

I interviewed a few members of this movement to get their thoughts on Venezuela and was shocked by their affection for the current Venezuelan government just by dint of it’s association with Chavez. Maduro is in the right because he is Chavez’s hand picked successor. Period. Any attempt to point out their failures in office were all met with the same response: “The Money Power sabotaged them”.

Crime in Caracas? The Rothschilds were behind it. Anti-government demonstrations? Goldman Sachs paid the protesters. To them it was self evident, since “unbiased” polls show that 90% of the Venezuelan people loved Chavez. That’s why the Money Power finally killed him — with cancer. It is an article of faith in their world that he was assassinated by the powers that be. The fact that he was a 58 year old man who, by his own admission, smoked cigarettes and only slept 4 hours a night was irrelevant. To them it is simply impossible he died a natural death.

So where does this leave us in the real world? The Venezuelan government is savagely clinging to power –to the point of ordering the security forces to fire into private homes in wealthy, anti-Maduro neighborhoods. This is happening while right-wing groups working for the nation’s corporate elite instigate their own acts of violence in an effort to seize control.

Both sides have their fervent supporters. Rightists the world over are hoping the government falls, while Maduro’s administration is esteemed in both predictable and surprising quarters. The reality is less sanguine than either side cares to admit.

The Venezuelan right wing created Chavez with their callousness. Chavez needed them to be the boogeyman so he could play savior. Decades of indifference to the people and their suffering made them willing to vote for radical, ultimately destructive policies. But it was a devil’s choice: Decent, inclusive government was never on the table.