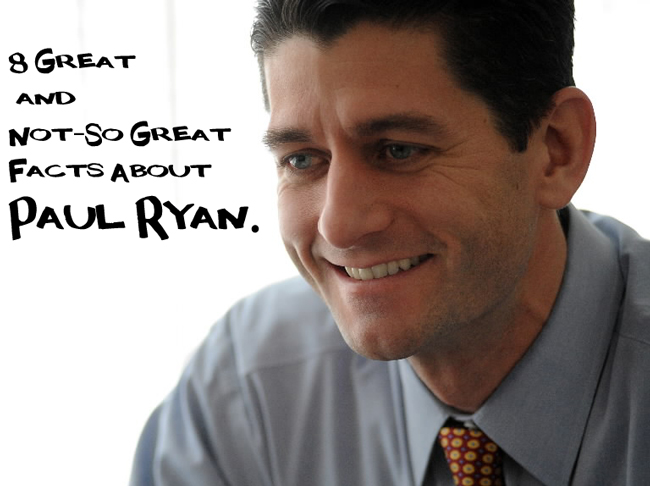 The media has spent the past few days buzzing over Mitt Romney’s VP pick, Paul Ryan. But let’s face it, most of us don’t know diddly squat about Paul Ryan. If a secret billionaire emerged from a bushel of thorns and offered you half of his/her fortune if you could tell them one fact about Paul Ryan, you would probably walk away with zero monies.

To ensure that you take full advantage of that hypothetical billionaire’s offer, we did some research on Ryan and came up with 8 Great and Not-So-Great Facts About Paul Ryan. Quiet Lunch isn’t about picking sides, so know that we are in no way trying to sway your political decision making or make Ryan look bad — we do, however, hope that some of these facts make you realize how much of a dick he is.

Ryan was born and raised in Janesville, Wisconsin, to Elizabeth A. “Betty” Ryan and Paul Murray Ryan, a lawyer. He is a fifth generation Wisconsinite who claims that his “veins run with bratwurst.” He is the youngest of four children.

He works out to the point of insanity.

Similar to Michelle Obama, Ryan is a staunch advocate for fitness — especially when it comes to America’s youth. He also does P90X almost every morning. He claims to have made close to 40 climbs of Colorado’s Fourteeners (14,000-foot peaks). If it weren’t for friends and family who could testify to Ryan’s humanity, you would almost assume that he is bionic.

He doesn’t believe in global warming.

To us global warming may seem as real as the air we breathe and as apparent as the melting polar caps but Ryan is convinced that it’s all bunk.

“Unilateral economic restraint in the name of fighting global warming has been a tough sell in our communities, where much of the state is buried under snow…” – Paul Ryan. (2009 op-ed)

He’s the Doogie Howser of the GOP.

Well, he doesn’t wear sneakers to work but he is consider to be a child prodigy when it comes to politics. After starting out as a staff economist for Senator Bob Kasten in the early 90s, he was elected to the House in 1998 at the age of 28. Ryan is now 42 years old and is still quite youthful in politician years. Think of him as the Eli Manning to Romney’s Peyton.

He’s for Personhood and against abortion.

He believes in your baby’s right to live but he doesn’t believe in your right to choose what comes out of your body — not by a long shot. Rape by some twit who is incapable of getting any? Tough cookies. Sexually assault by a family member? Hey, we’re all family here anyway, right?

Humor aside, whether it be rape or incest, Ryan doesn’t believe in abortion and would like to do away with most forms of birth control.

He wants to replace Medicare with coupons.

After Ryan’s father passed away, he saved Social Security survivor’s benefits to pay for attending Miami University, where Ryan double majored in economics and political science in 1992.

He drove the Oscar-Meyer Weinermobile.

Ryan used to work summers as a salesman for Oscar Mayer and he even drove the Wienermobile once.