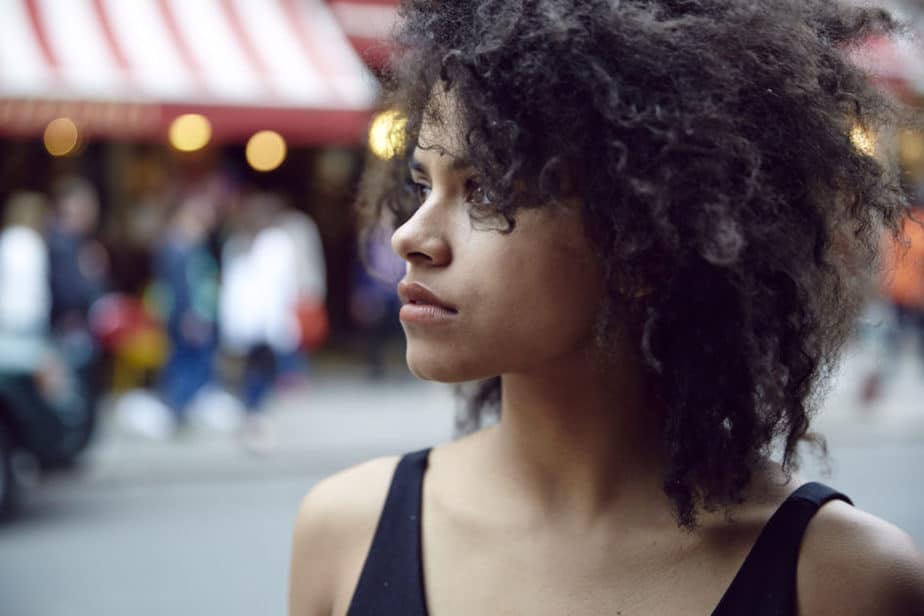 Deadpool was a box office smash and with teasers for the upcoming sequel leaking online, everyone is tenting their pants for the follow-up. Set to be released about 10 months from now, the film will feature some new characters that will costar alongside the Merc with a Mouth. Goonies alum Josh Brolin will be playing Cable, a role that could have went to Kevin Nash (if he had the necessary acting chops), and Zazie Beetz, known for the role of Vanessa on Atlanta, as the probability-permuting Domino.

Brolin posted a pic of himself that was taken while he was undergoing makeup application for his Cable character and visuals for Beetz Domino as Domino was recently in its full glory earlier this week—and as the Internet went nuts in general, fans had little complaints about the former but are having a slight issue with the latter. 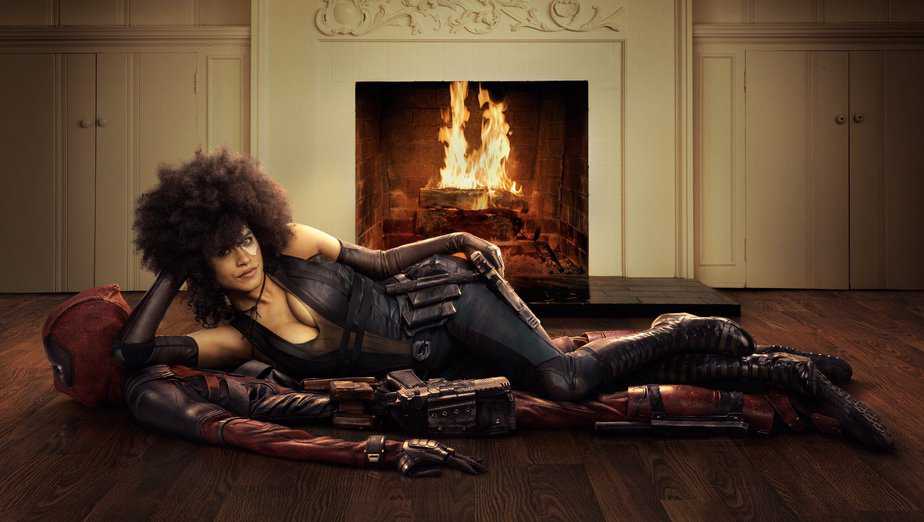 If anyone who isn’t a comics buff, there is nothing wrong with the picture above. In the picture, Beetz (dressed head-to-toe in full Domino regalia) mimics an exactly similar Deadpool promo image; only Deadpool has taken the place of the bearskin rug and Domino is the place of Deadpool. Nothing afoot here.

Now, if you are a comics buff or are even familiar with Domino’s usual appearance, you will notice that her color scheme is somewhat reversed. The character, who is a sharpshooting mercenary with the power to manipulate probability, is traditionally covered in stark white skin (a pigment alteration caused by her mutation) with a black spot over her left eye and as a result resembles a domino—hence the name Domino. But in the recently released promo photos the character is sporting Beetz’s natural skin color and her signature black spot is now white. 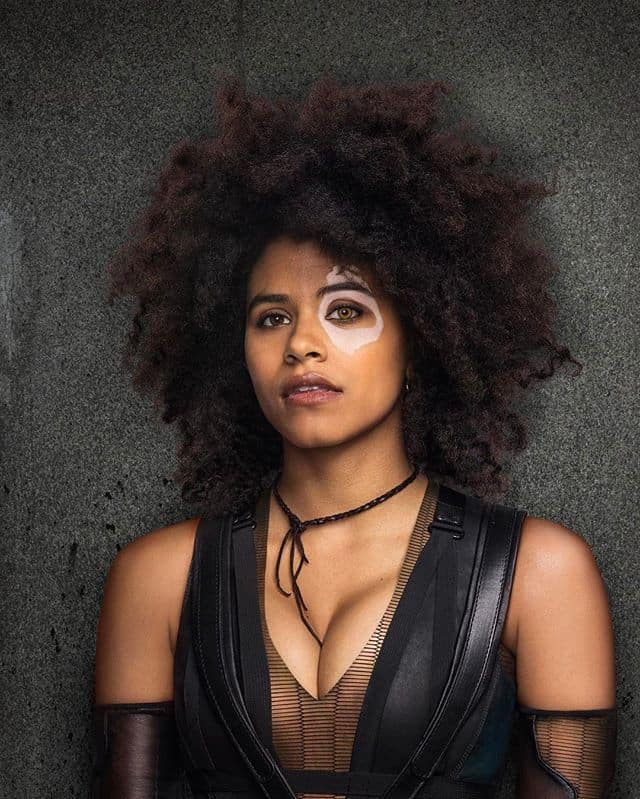 Comic book fans (white folks especially), weren’t having it. When you view the comments of Ryan Reynold’s twitter, you immediately see some evidence of backlash. One tweeter chirped, “But please tell me Domino will still have her bright white skin.” Another user quipped, “I suppose the next step is to give Jubilee dreadlocks.” Someone even went as far as to take things into their own hands and Photoshopped the image, changing Beetz’s skin color white and her signature spot back to black. Others also stuck to a purist point of view—which was completely valid—but their pushback still reeked of latent racism. Then there were tweeters of all colors, black, white, purple and polka dot, who subsequently pushed back in defense of the character’s “unorthodox” appearance by citing the racist undertone and also by bringing up examples where a comic book characters’ “true” appearance didn’t make or break the portrayal of that character when adapted to other medias such as film or cosplay. 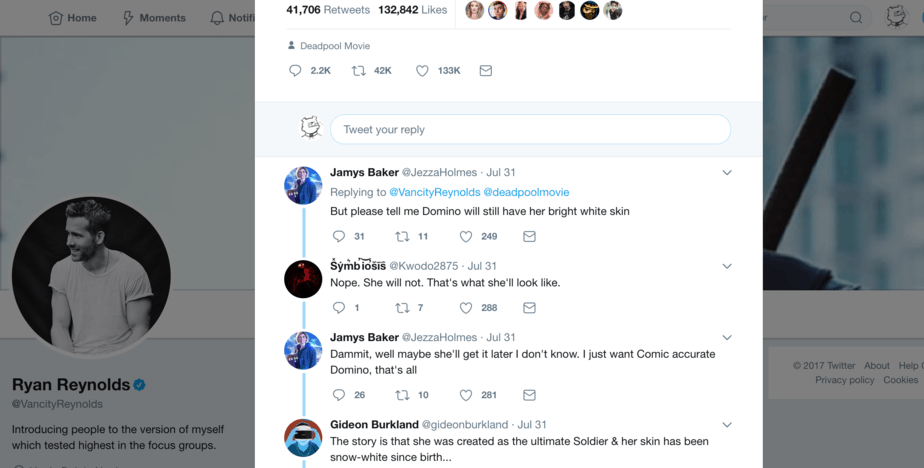 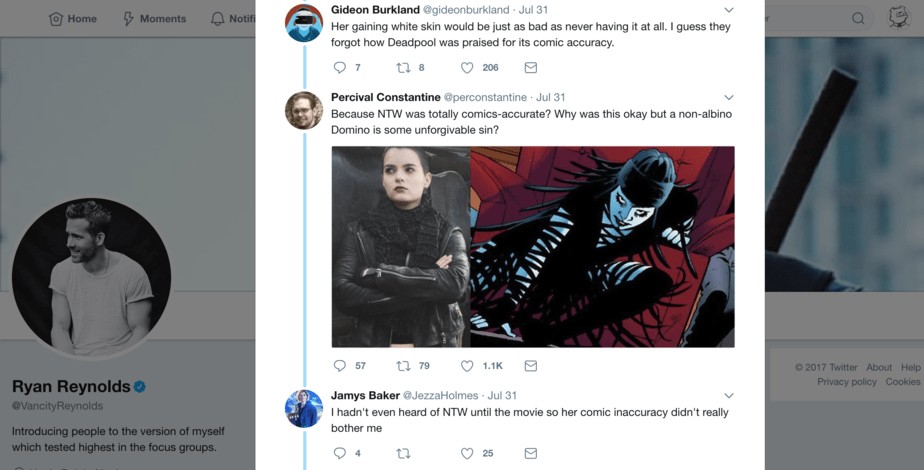 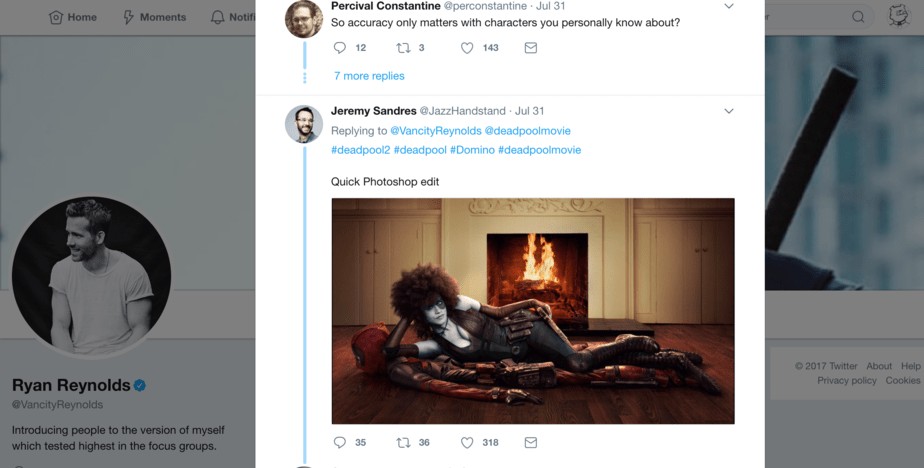 Before we go on, in an effort to avoid seeming bias, allow me to sum up my reaction—complete with partial backstory. *rippling flashback effect* Ever since I was a little lad, I adored the visual arts and comic books naturally drew me in before I could even read or truly conceive the full spectrum of the entertain that the book was providing. As an adult, you can consider me to be kind of an intermediate fan of comic books, sort of. My collection isn’t what it used to be by any means. Nonetheless, they intrigued me as a bright-eyed five year-old and they intrigue me now as a soulless 31 year-old. I still fatefully watch superhero based cartoons and movies; and, with the help of the interwebs, I am constantly studying their origins, abilities and alternate story arcs. I am not privy to every single hero’s origin story but can still rattle off a few pieces of trivia when good and ready.

Domino has always been one of my favorite heroes in regards to aesthetic but I never really got the chance to get into her character and find out what she’s about. With the announcement of Beetz being cast as Domino in Deadpool 2, I immediately went on a research rampage, refamiliarizing myself with the character and looking up as much about her as I possibly can. That being said, I didn’t really notice that she wasn’t all-white. I eventually noticed it, but my appreciation of the unveiling overrode any initial need to nitpick. I mean, Brolin is playing Cable and Thanos. So who cares?

Would have it been cool to see Domino looking like Powder‘s less socially awkward, gun-toting cousin twice removed? Sure. But I still appreciated the film’s interpretation of the character despite some discrepancies. Of course there would be some complaints—because you can never truly please fans—but the connotation of the complaints caught me off guard. I was aware that the comic/cosplay world could be misogynistic and racism isn’t too far around the corner but for a split second, I let my guard down and I was just completely blindsided. Then they start talking about her hair… I was friggin’ befuddled and just like most POC in America, began wondering if I was seeing things.

What do you think?

Is there some racial motive behind this backlash or is it just run-of-the-mill complaining?