[su_dropcap style=”flat” size=”4″]T[/su_dropcap]here is no question as to how instrumental Yoko Ono has been in shaping the facets of performance and experimental art. Her creative whims contributed to an overall spark that set the arts in a new, ingenious direction. Yoko Ono: One Woman Show (1960 – 1971) is a sweet gathering of Ono’s early years. The exhibition includes approximately 125 of her “early objects, works on paper, installations, performances, audio recordings, and films, alongside rarely seen archival materials.”

To our surprise, Yoko Ono: One Woman Show… is Ono’s first official at the MoMA. Although, Ono made an unofficial debut, Museum of Modern [F]art, in late 1971—in which she released flies on the museum grounds and invited the public to track them—her was never featured at this wonderful capacity. In fact, the time period that is being celebrated are actually the years leading up to her famed unofficial debut.

The exhibition was introduced on May 17 and will run through September 7, 2015. Be sure to stop by! 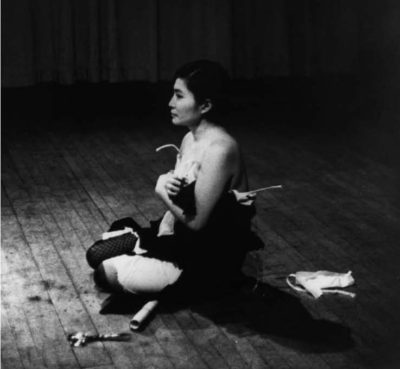