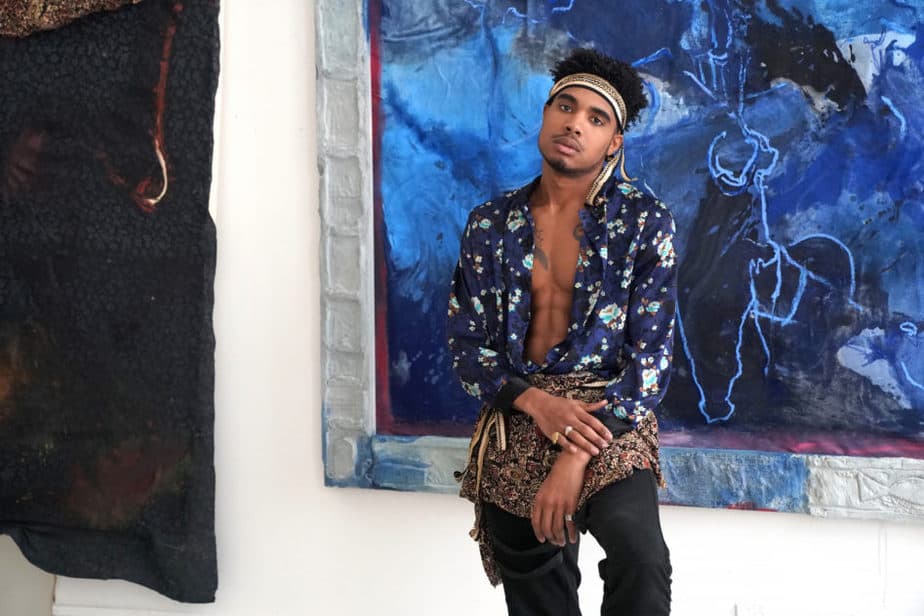 New York-based artist Vieno James exudes a raw sensuality that mirrors the art he makes and the materials he utilizes in his work. Juxtaposing stucco framing against the silks and other fabrics Vieno procured from his travels to Italy, Kuwait, and Egypt, he blurs the line between painting and sculpture. There’s a calmness, physicality, and hint of theater to James’ art, not unlike the artist himself. Aesthetically it can be considered contemporary yet clearly draws from the thousands of years of art that came before him, making it difficult to categorize. In the center of “Long Live Vieno”, you can see subtle nods to Frankenthaler and Rothko. Upon closer inspection, you’ll notice the loosely drawn figures set in a classical triadic composition. In the frame, Vieno has carved symbols indicative of Egyptian hieroglyphs and Italian friezes.

“It’s essentially a flattened urn. I made it in response to fights between my sister and me after my father passed away. The central figures are battling within a whirlpool of emotions. The carvings on the side are two versions of my dad’s ghost rising from the grave to ‘heaven’, turning to angels, and then fighting each other across the top register. One grave is marked 64’-2013 and the other 64’- infinity. It’s sort of a conversation about permanence and impermanence after death. His name is the same as me. So I decided to title it after both of us, that way it could live on after I’m gone too.”

I joined the artist in his Chelsea studio to learn more about his art, travels, and vision of the future.

Jennifer Parker: What have your travels meant to you and your art?

Vieno James: They have all left their mark on my soul. Kuwait was my first and brief glimpse of the Arabian Gulf. It was lavish, multicultural due to its location between Iraq and Saudi Arabia, and diverse in population. Passing judgment on all citizens living would be too broad a stroke to paint, so I say this with caution. I don’t like the way I saw expats and other “second-class” citizens treated by “first class” citizens while there. Like most high-class societies, the infrastructure is built by exploiting humans deemed to be of a lower class by using them for cheap labor. I think this form of classism is a backward way of thinking. The younger generation of Kuwaiti’s and artists I met there felt the same way. They want to see a social and moral shift in their country. From what I’ve seen in the exhibitions while there, they are actively working towards this goal and people are starting to listen. The complete shift in the country will take time, as those with traditional beliefs still hold power. It will happen.

JP: How did your use of textiles become inseparable from your own personal clothing choices and your art?

VJ: They resonate with my spirit. I chose them, and they chose me in a sense. The ones I’ve used most recently have come from Khan el-Khalil, Giza, and Mubarakiya. The fabrics I wear I use at times in the creation of my art. There’s a pair of black pants I wear all the time made from a sheet of velvet with rose embossing I bought in Khan el-Khalili. I had them tailored in Ma’adi. I’m using pieces of that same fabrics to line a set of framed drawings in my next body of work “Lone Star. *” 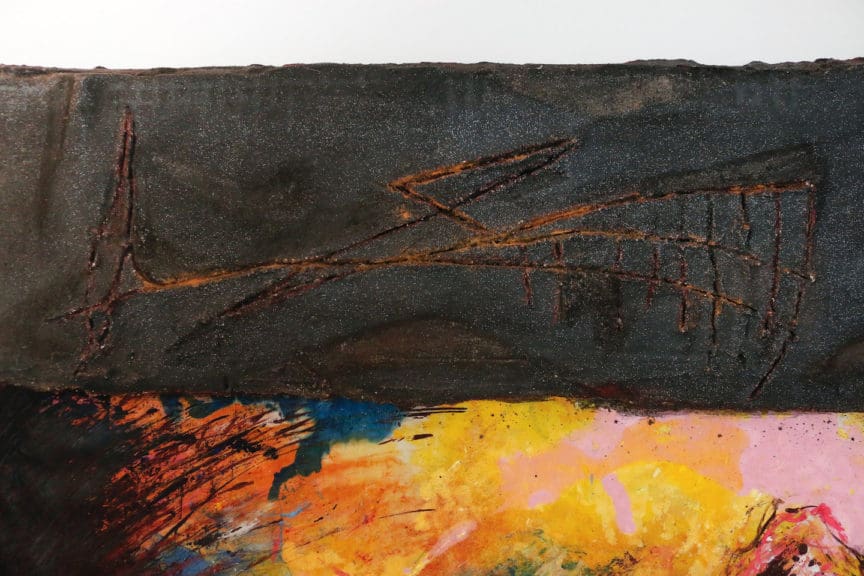 JP: How did being robbed at the pyramids and subsequently having to sleep on the fabrics that you currently use in your art inform your work?

VJ: HAHAHAHA! “Seriously conned” is a bit more accurate. I intended to visit the pyramids that evening, but I was quickly hustled onto a horse and into a fake tour that led me through the alleys and back streets of Giza only to reach an open desert outside of the compound that houses the Pyramids. I ended up getting into an altercation with the conman when he refused to give my money back. I decided to go to the police instead of fighting. The police said they’d help me track the guy down and had me hop in the back of their patrol van. We drove up and in the compound, to head towards the township. It was an interesting ride. On one hand, I was afraid that I would end up getting in trouble with the cop (Cops there don’t have the best reputation with foreign relations. Also, I don’t speak Arabic, so I was only half sure about what was going on.). On the other hand, I was amazed to see Khufu Pyramid up close with the nighttime laser light show working its way across the stones. Anyways, we made our way into town to search. After about thirty minutes and a few stops at police checkpoints, the lieutenant driving receives a call saying that they found the main culprit.  They took me back to their station. At first, I was supposed to choose the culprit from a lineup, but they decided to have me sit with the lieutenant and a few officers in the lobby. About 10 minutes pass and a guy not involved in the crime walks in the station, looks at me, and pulls out a big wad of cash. Everyone asks me how much was stolen, the new guy counts it up and hands me the cash, and they send me on my way. Hahaha. I figure this is what tourists feel like when they get scammed by those people selling fake tickets outside the empire state building.

JP: How did the military presence in Egypt impact you?

VJ: There was always tension in the air. It felt as if something could go down at any minute.Military turrets hanging from walls with armed soldiers, police checkpoints, even the security guards at the Egyptian Museum had semi-automatic pistols. I was only living in Cairo for a month. I can’t imagine what it was like to live through the past seven years since the Revolution.

JP: How does that influence the current bodies of work you are creating?

VJ: Seeing and touching hieroglyphics at Karnak and Luxor Temple, sneaking into locked tombs in the Valley of the King’s; I was visually and spiritually stimulated. I needed to look at the art of the ancient Egyptians in order to learn how to properly compose a story made from symbols. It especially influenced my piece “L.L.V.” 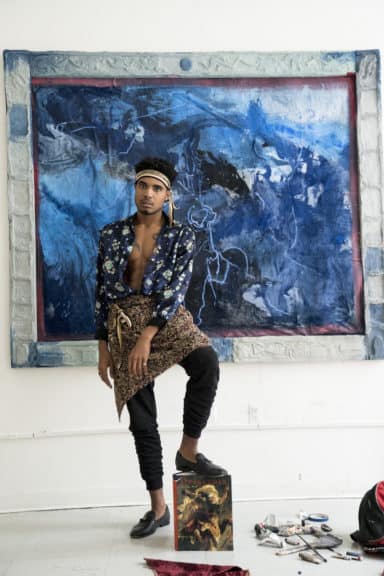 JP: How does your interest in ancient civilizations and human history inform your work?

VJ: I think that for the past 300,000 years we’ve been trying to solve for X; searching for objectivity in metaphorical truth and metaphors in objective truth observed in the world around us. Sadly, along with the vast journey of mankind, we’ve made huge mistakes that still traumatize us to this day. 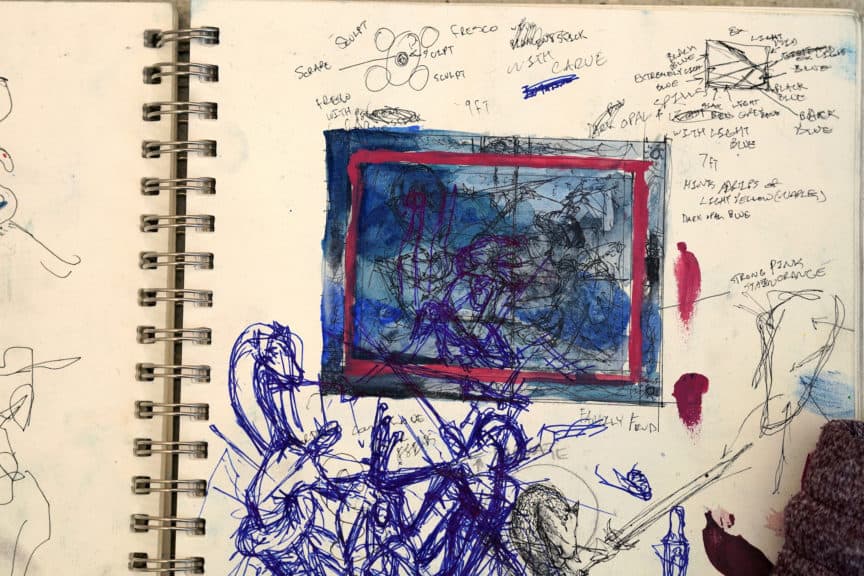 JP: Where do you see art/culture going? 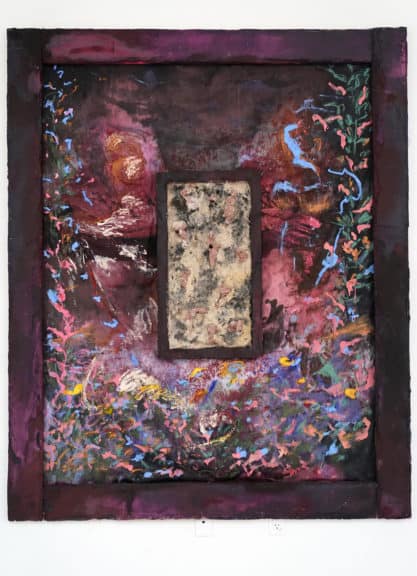 The Meadows | Photo by Jennifer Parker

JP: What are your motives in art and the world as a whole?

VJ: If it’s attainable, I want to become one of the greatest artist’s of all time. I don’t say this with the intention to have an orgy in my own vanity. I want to add to the art historical conversation of the greats that came before me and the ones that are my contemporaries. I want to find and showcase the harmonies I see in cultures, histories, and people from around the world to effect the present so that hopefully 300 years from now we won’t still be dealing with the arbitrary divisions we currently draw between ourselves with racism, classism, and nationalism. I have a lot of work to do to reach this goal not only in developing my art but also in activism. This journey will take time and experiences I have not gone through yet. It will require having a larger platform to speak from, community projects based around the world, the construction of eco-friendly monuments that express these ideals, and having open dialogues with students at schools around the globe.

I believe this is a vision of the future worth fighting for, and even if I don’t complete my mission, I hope to at least change the world in a positive way during my lifetime. Call it romantic, call it dreaming; I don’t care.  I’m excited to see what we all can do in the next 100 years to make the world a better, more friendly, and exciting place for us and the life forms we share this planet with. 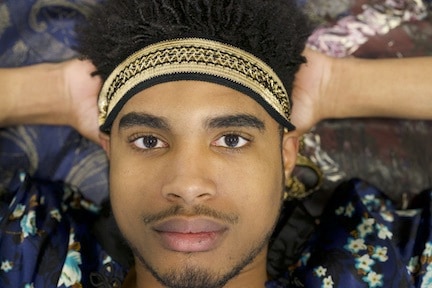