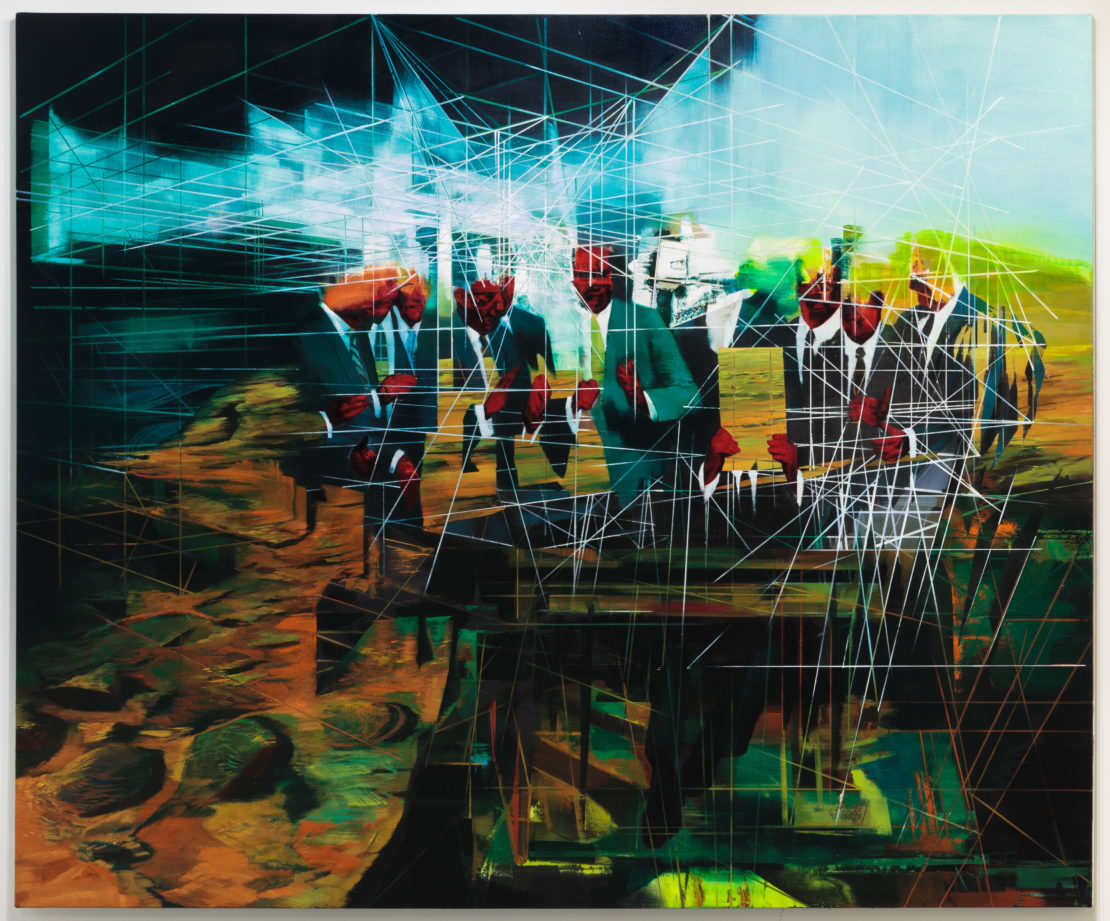 Despite showing up on motivational posters and Internet memes, there’s no concrete evidence Albert Einstein ever said: “If you can’t explain it simply, then you don’t understand it well enough.” Seems to be fake news. Still, it’s an interesting thought and one that should be applied, especially in casual scenarios where complex modern ideas are being disseminated-a bar, at dinner parties, art happenings, etc.


At 5pm on Saturday, September 22nd, artist Tim Kent will be hosting a conversation at Slag Gallery in Brooklyn. The main theme throughout will most likely be “power in all its forms.” What should be interesting, is the fact that Kent’s complex and confidently composed large-scale paintings, as featured in his latest solo show, Dark Pools and Data Lakes, unlike a lot of contemporary painting out there, can actually stand on its own sturdy, vibrant, architecturally audacious, metaphysical legs. The work doesn’t need all the charitable, ancillary verbal fluffing to exist and thrive. 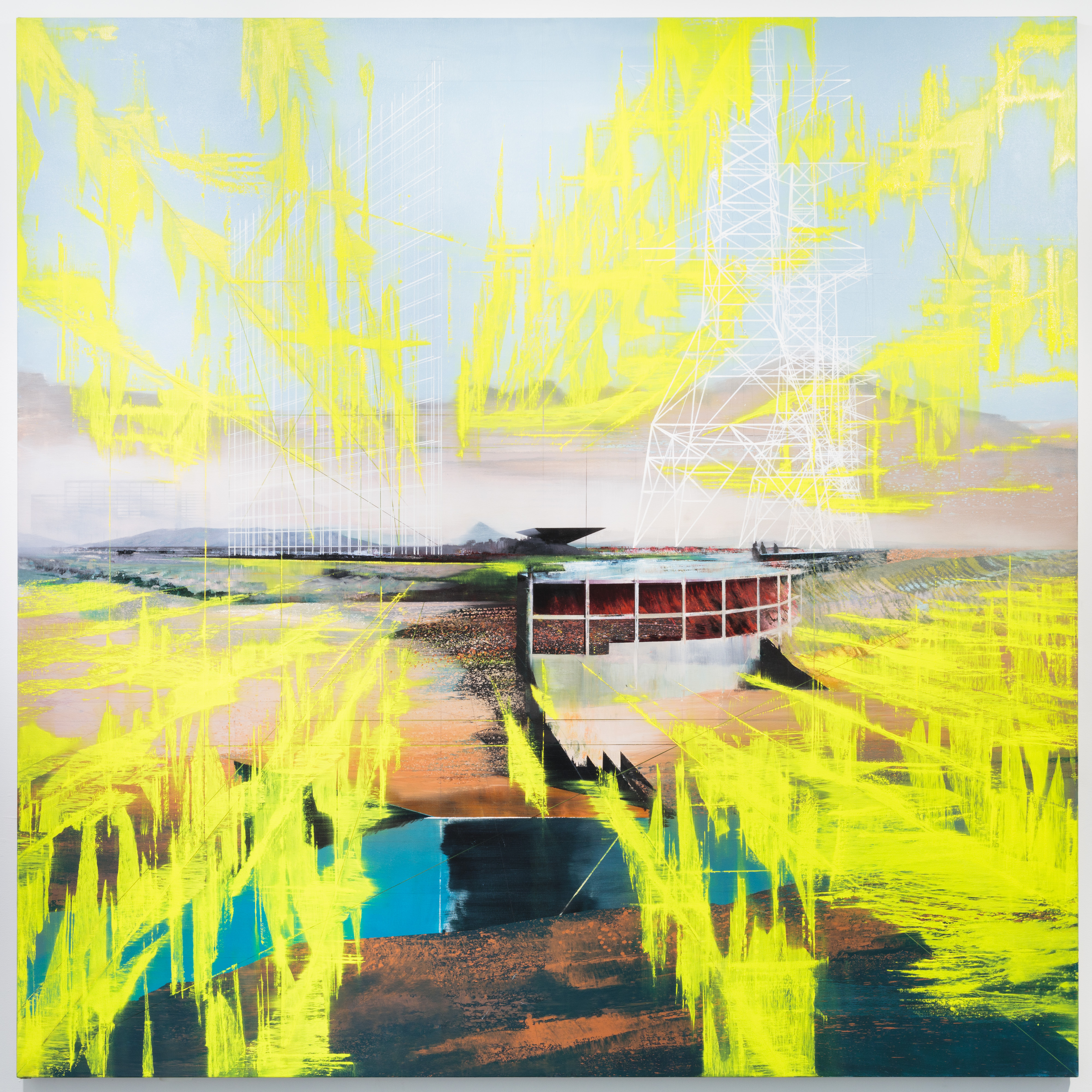 Nevertheless it should be interesting to see what Kent has to say, or more interestingly, what he’s willing to share further. There’s a larger conversational through line that certain creatives should sit down and be humble for a bit. Make some room. Not terrible advice, but what if your brain is overflowing with intellectual, theoretical and alchemical treasures? What’s one to do with all that potential energy?

In the case of Kent’s show and certainly for his upcoming gallery talk, listeners of all demographics should arrive subscribing to Dr. Jordan Peterson’s 9th “Rule for Life,” which can be culled from his recent international bestseller: “Assume that the person you are listening to might know something you don’t.”

Being that we’re simultaneously in the midst and on the cusp of some truly insane technological advancements and only beginning to scratch the surface of what our brains are exactly, let alone what they’re actually capable of, it’s important for artists who have a concerted interest or any vague semblance of a grip on these difficult and strange matters, to relay their supplementary findings in an easily digestible manner to the uninitiated, the under-appreciated and the disproportionately powerful alike. 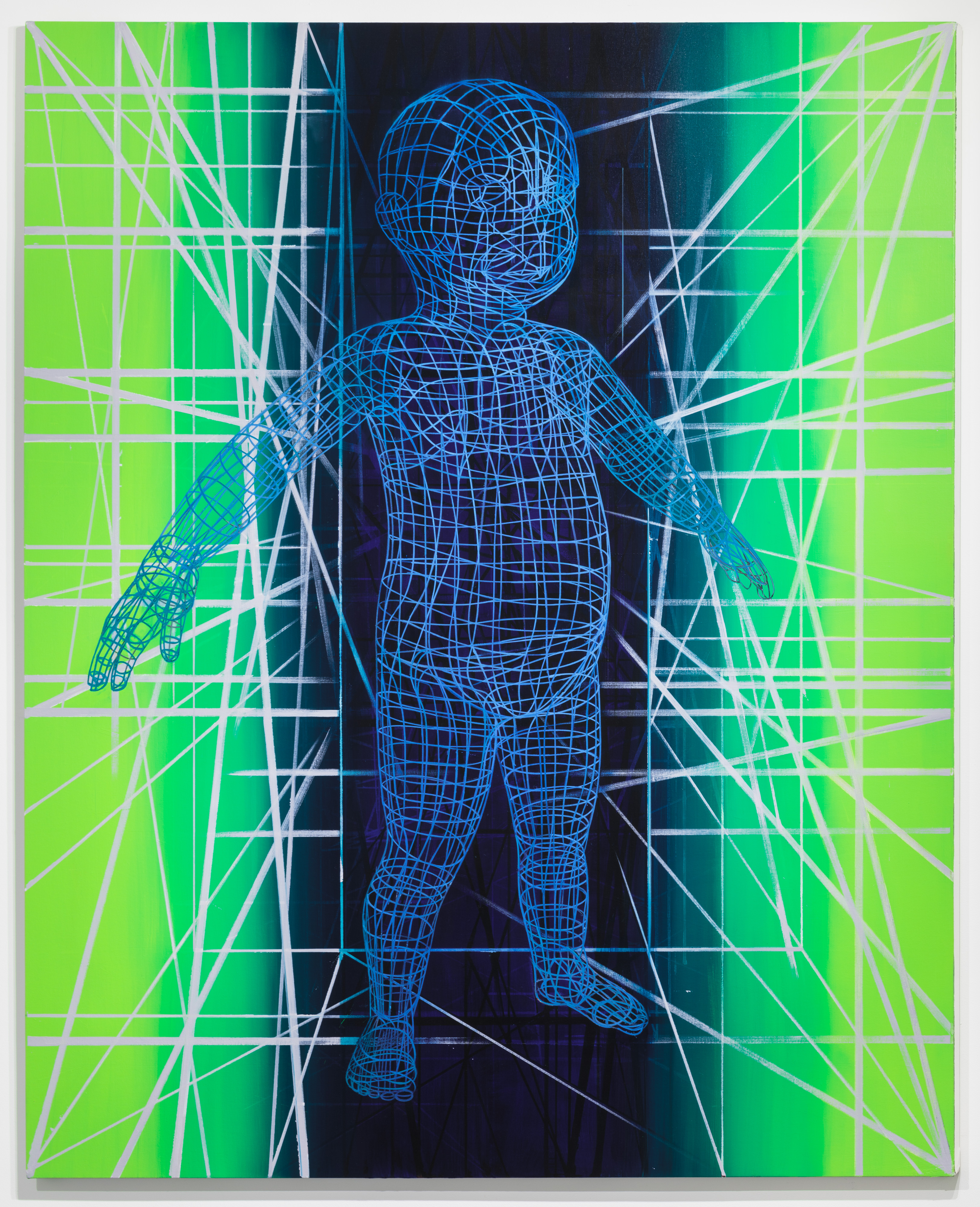 Painting has proven to be one of the most affective mediums to ease people into ideas that transcend partisanship and sociological myopia. Kent’s Options Include…, 2018, which features a painted yet seemingly digital frame of a generic baby trapped in some kind of phenomenological hyperspace incubator, poses numerous moral and ethical questions concerning the complicated future of human reproduction. The painting itself is designed to serve as the foundation for an augmented reality experience, where gallery goers would physically and genetically construct their own 3D baby avatar, feature by feature, via a phone application.

Tim Kent’s art is brain food and soul food at a time when most art aspires to be one or the other and rarely succeeds at being either. It’s unapologetically, objectively, almost offensively strong, even if the flesh and blood artist himself is quite conscious of the larger climate surrounding the frustrating reality that his demographic alone can contextually exist without an additional identifier in front of the word “artist.” 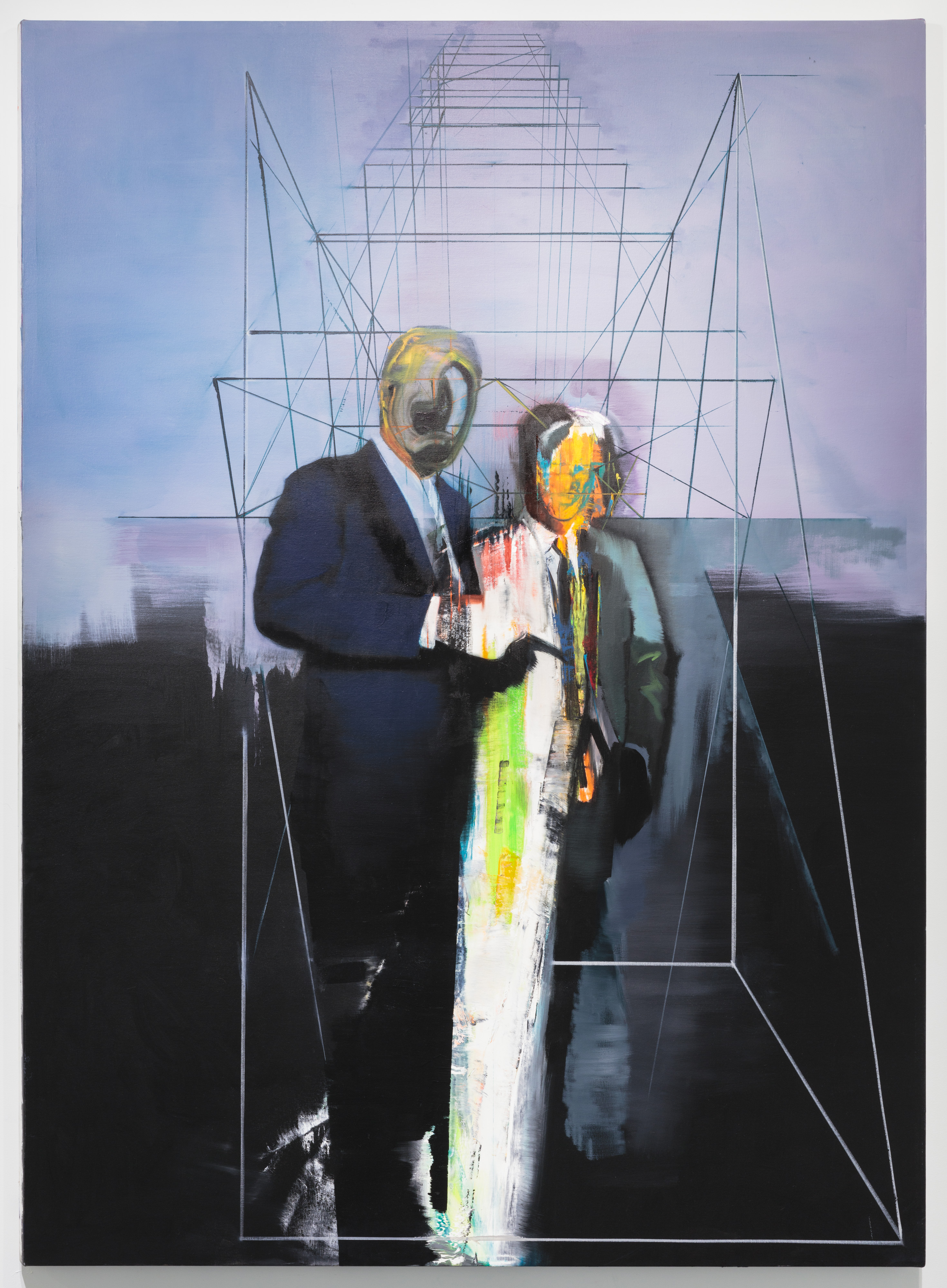 “As my wife pointed out very astutely,” Tim Kent begins on a noisy sidewalk perpendicular to the 56 Bogart gallery and studio complex in Brooklyn. “Painting itself has its own relationship to power. The fact that I’m a white guy painting pictures, big institutional canvases especially, has a type of masculinity inherently tied into it.”

It’s worth noting that Kent was approached repeatedly on the street by a diverse procession of fans and friends or combinations of the two, each gushing about the undeniably impressive power behind the man’s art show. One guy made an admittedly astute and only slightly awkward comment about how Mr. Kent’s wide, searching eyes could very well have served as the quiet inspiration for the show’s title.

The conversation moved outside because Kent’s bold painterly milkshake was bringing a train of brainy art writers and admirers into the gallery, all politely interrupting, eager to get their chance to pick Kent’s brain for secrets and clues.

Despite the almost absurd adulation from endless Morgan L stop RPG video game extras and loud, low-flying LaGuardia air traffic, Kent, who exudes a calm, wired and reluctant big man on campus vibe, carries on. “There’s a real lash against the hegemonic power of the white male. It’s a definite structure. It’s so lashed into every part of our liberal culture that we have in New York. I was at first a little embarrassed to be making paintings. I feel like such a schlep. I walk around this neighborhood with my painting pants on. It’s like I’m a walking target of douchebaggery.” 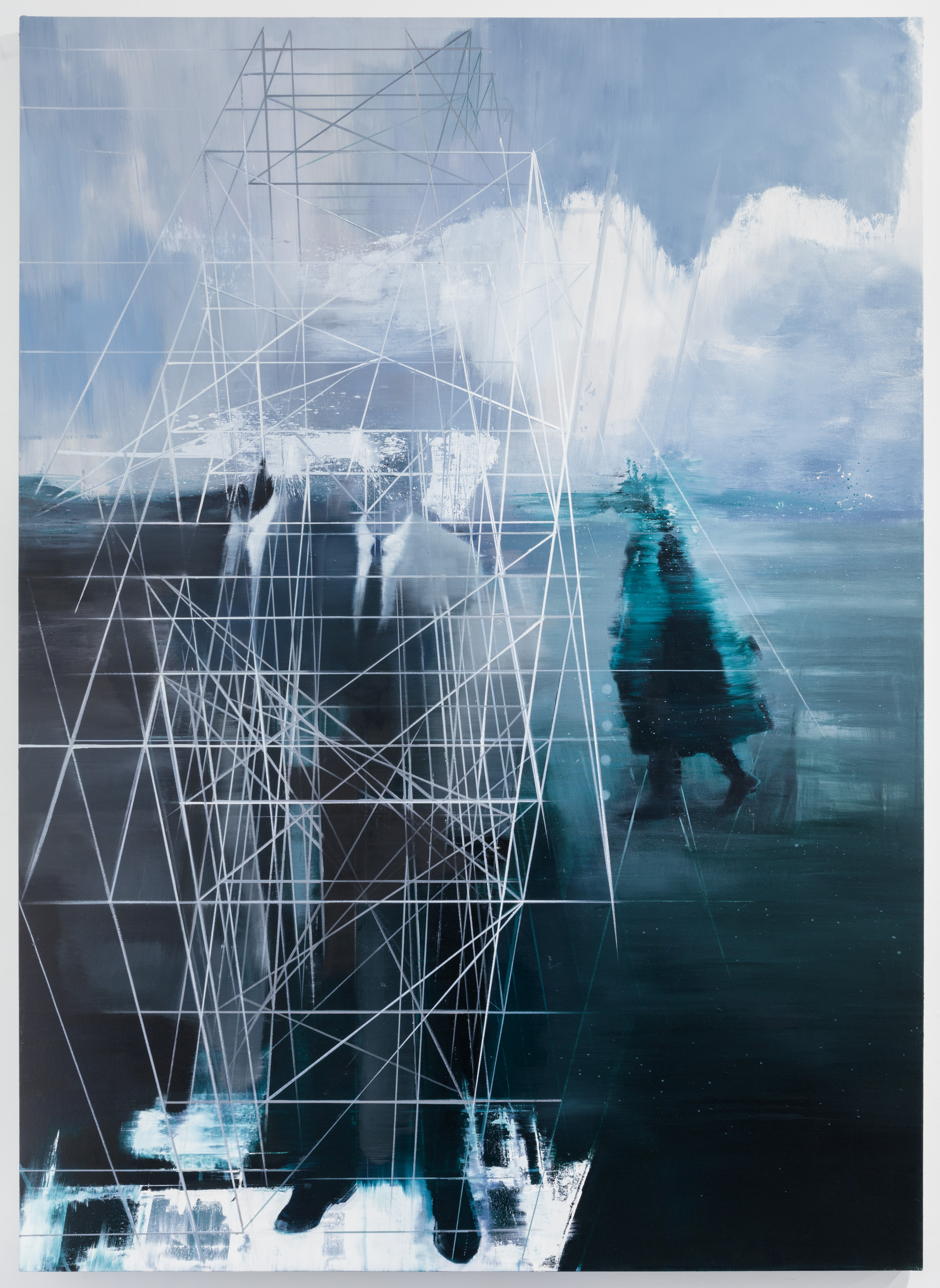 People like and admire Kent though. He’s a high-functioning wild man if you get to know him personally. He’s the manager and human mascot of The Giraffes, a kickass rock band in which he used to play. He’s generous, funny and tells the truth, often bluntly. He can be intimidating. He frequently comes across like advanced humanoid AI pacing back and forth along the bleeding edge: tempered, super-charged and often fatalistic, now currently existing in a post-modern nexus where power and ambition meets greater understanding and heightened self-awareness. 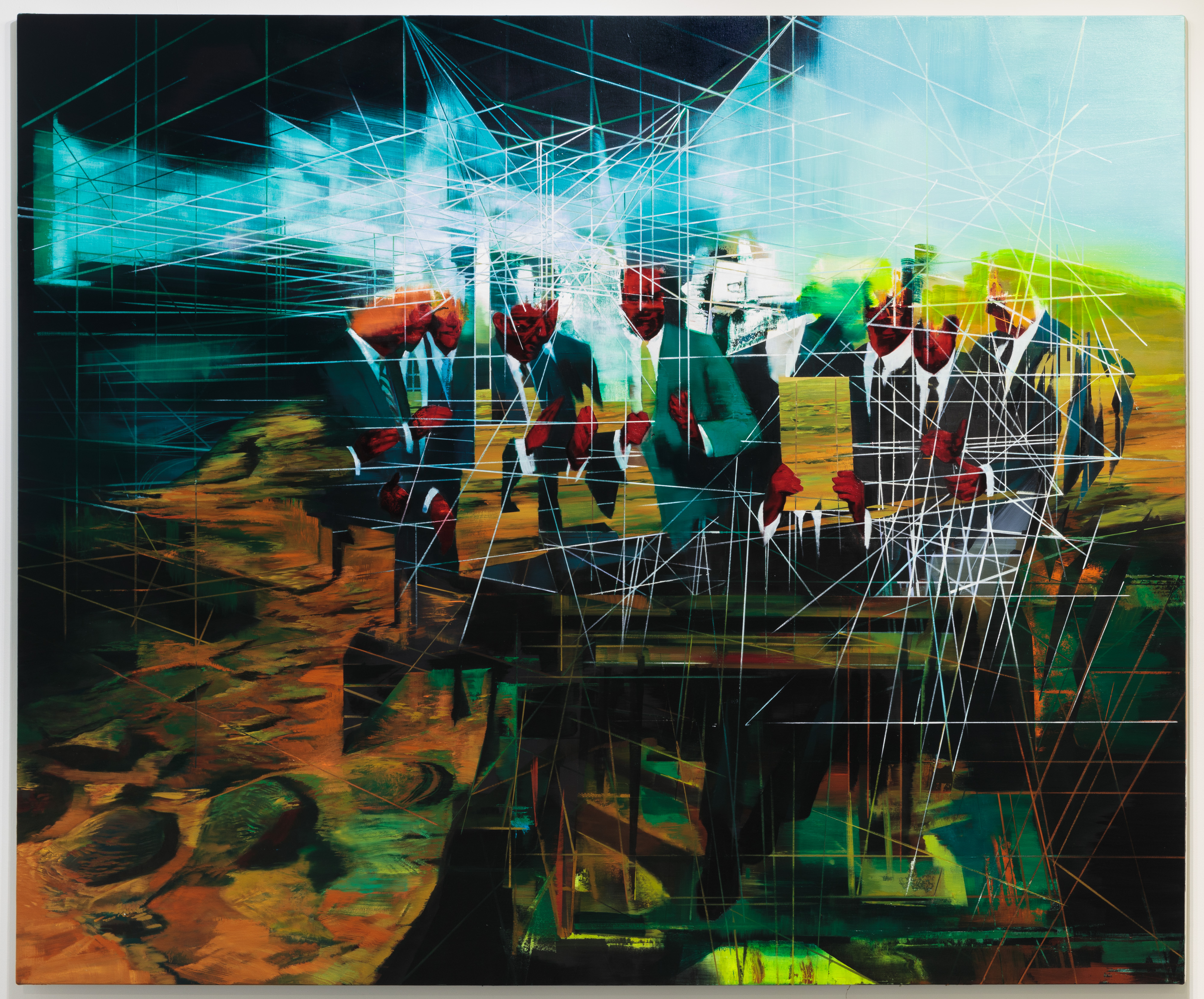 And who are these men exactly?

“You mean the white guys?” Kent responds with a rhetorical smirk. “It’s not about who these people are, these white men hovering around this figure, almost like vultures coming around this piece of paper with nothing behind it. What’s important is they’re magnetized to the power center and it’s that person sitting down signing something into law, and the law is made only to benefit them really.”

But these disembodied fragments of men in power suits are just the floating surface avatars (archetypes) of what Kent is really trying to show you. He wants you to see the underlying principles at work. Considerably more important is the nature of power itself and how deeply pervasive, hierarchical structures play out in various dimensional plains and at vastly different scales. These men, compelled to the power center, operate within a microcosm of the gargantuan utilitarian grid system-the largest engineering object in the world-itself a reflection of the underlying unified field, which in all likelihood, operates in a similar manner.

“That’s one of the things I’ve had a really hard time trying to understand while thinking about power,” Kent offers. “We separate it into terms like hegemonic power, political power, informational power. We talk about these power structures and power systems, but we don’t really have a descriptive term that encapsulates the idea of the thread-knowledge power, at least not in English.”

This is where Kent can take you. Think about this now seemingly commonplace axiom: Knowledge is Power. There’s a more profound idea within this phrase and it’s hiding in plain sight.

Perhaps not being occupied by the at-risk nature of marginalized life in America is just another node of privilege that allows an artist like Tim Kent to delve into some insanely complex subject matter, which, like the science-fiction writers of the 20th century, could help push our species into a more fantastic future, that is, if we approach it with temperance and humility. 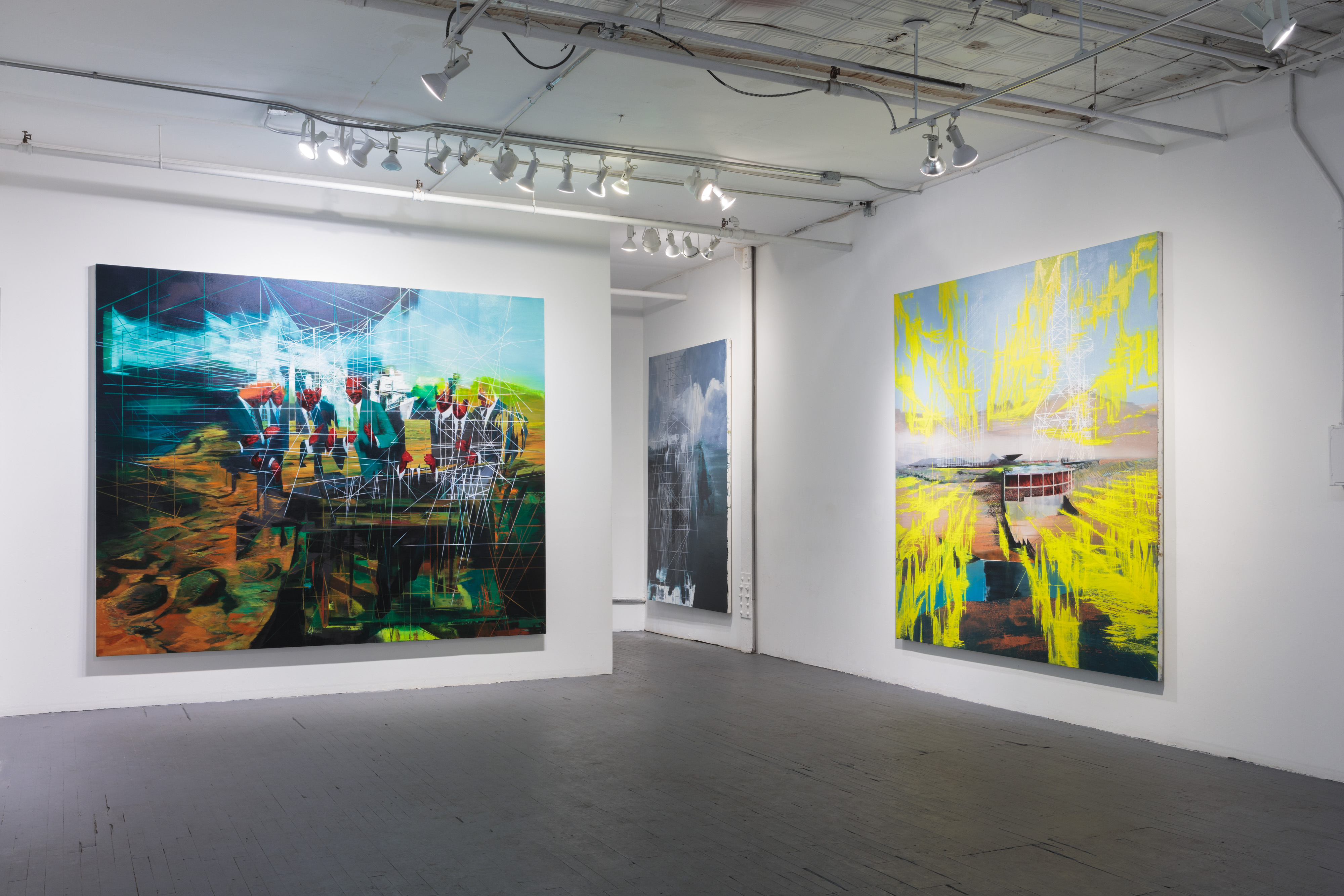 Kent, a new aesthetic mapmaker of infinite potentialities and quantum realities, is an island unto himself, especially as a thinking man’s painter. Dark Pools and Data Lakes at Irina Protopopescu’s Slag Gallery stands as a bold invitation to all curious citizens of Earth’s base reality. “An invitation to what?” you might ask?

Something immeasurably valuable and extremely hard to come by: A new perspective.