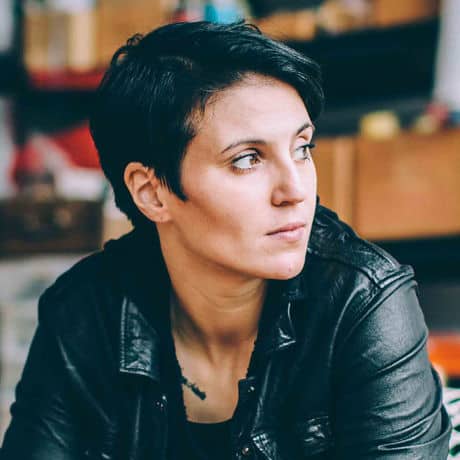 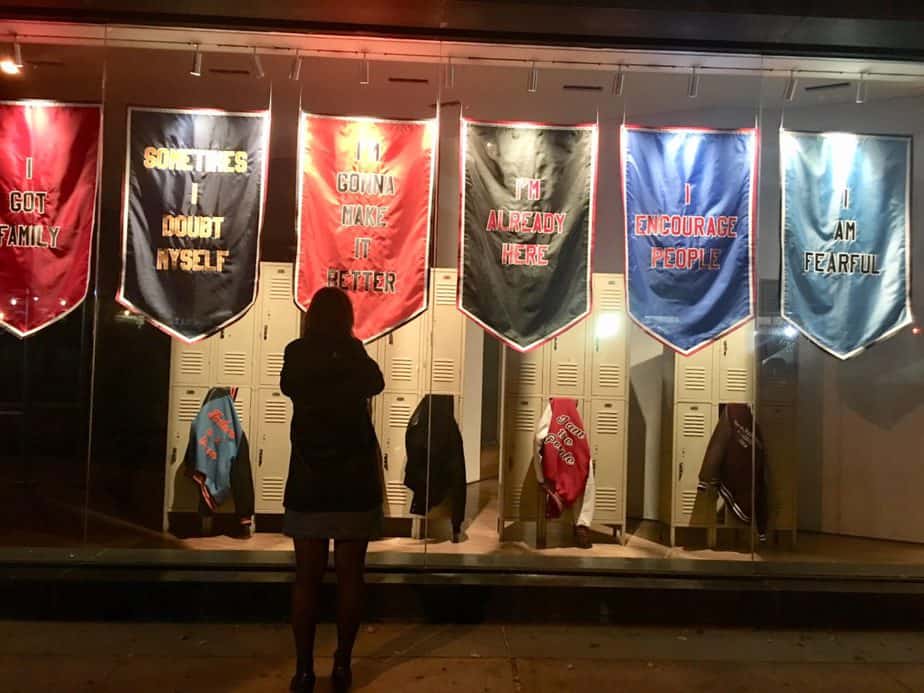 A chill, late November rain falls on a dark cobblestone street in New York City’s fashionable Meatpacking District, where the Renzo Piano-designed Whitney Museum dominates, a glittering symbol of the moneyed art world’s move downtown. Less than two blocks away, outside the aptly-named Ft. Gansevoort, an art gallery on the beachhead of some of New York’s most exclusive real estate, passersby stop to look at what appear to be championship banners, hanging in the gallery’s large windows. Artist Cheryl Pope, their creator, chats amiably with friends and admirers who have come to the opening of her show, “I’ve Been Heard”. Pope, who is an experienced amateur boxer, sees artists and athletes “in parallel”, and for this show, she has spent several weeks criss-crossing the city and speaking with kids who inhabit its public parks and basketball courts, which she sees as the last of our “democratic” spaces. She is from Chicago where she lives and works, and is familiar with the invisibility of certain members of society.

“Chicago is an example of the conflation of all the issues that we face in the United States,” she said. “Every day you hear of schools closing, you hear of violence. The relevance of these issues is embedded on the ground level of everything you do. You can’t bypass them, you can’t ignore them.” 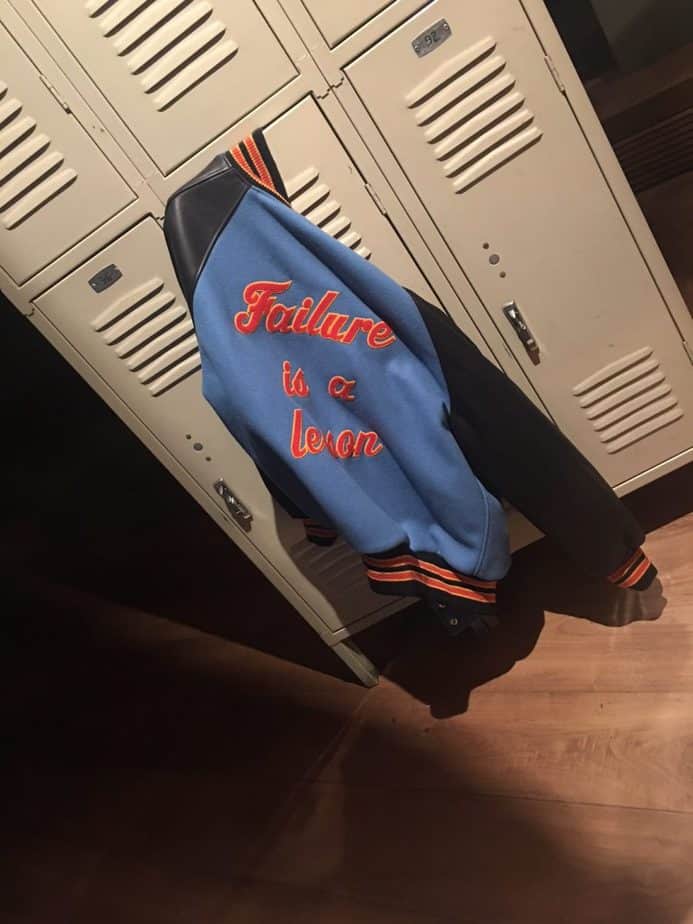 The hanging banners in the gallery’s windows, as well as varsity letterman jackets draped over school lockers, are wool-embroidered with quotes she has gathered from these kids, such as, I GOT FAMILY, I AM FEARFUL, and I’M ALREADY HERE. Pope sees her work as storytelling. She asks, “Who gets to tell the stories, and who gets to construct and organize the narrative?” The answers are in her work, which gives voice to kids themselves, to their own thoughts, their own concerns. The championship banners and the varsity jackets tell their tales, exactly as they have ascribed them. One of Cheryl’s collaborations in a recent show called “Bold Disobedience”, even had kids as curators. When she was a teaching artist at the Museum of Contemporary Art in Chicago, she recalls, “Giving tours at MOCA, talking to young people, I was always intrigued by what questions they had, because art offers questions, but not necessarily answers.” 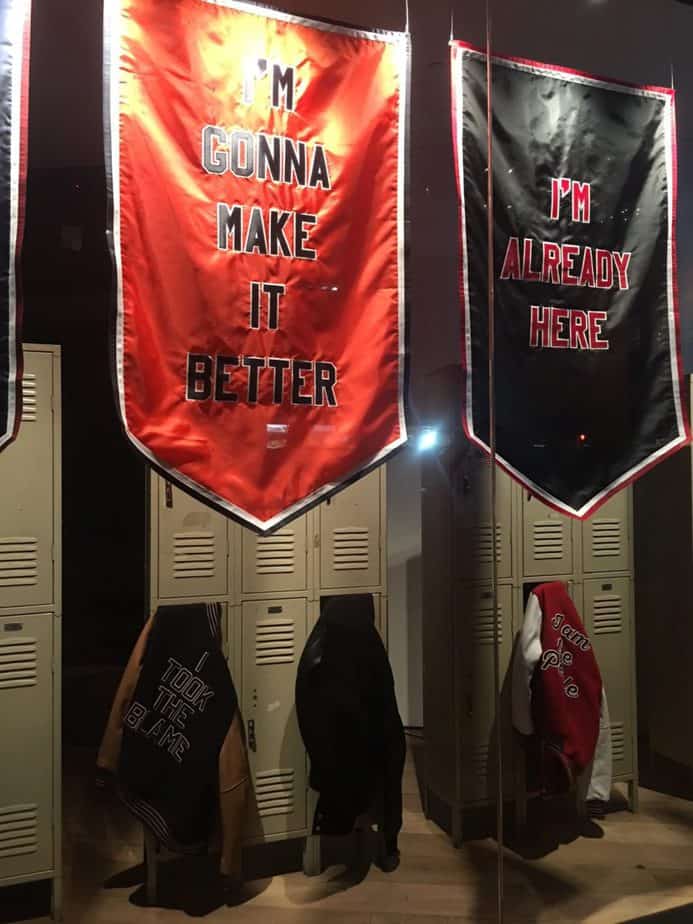 Pope herself was once a “down and out, suicidal high school student”, when she walked into the high school art room. “At that moment, the door was open and you could step into it,” she said. “It wasn’t about financial survival as much as it was a life support, like I could stay alive within this conversation. It wasn’t that there was a specific room or a seat at the table, you could just step into it and you could navigate it. The history of artists, how stories were told, and a search to understand and ask, just you see home and you know it.”

She met the visual artist Nick Cave when she was 20 years old, in 2000, and asked if she could intern with him, not even knowing what that entailed. “Everybody needs that one person who shows them that the door is open and that room is available,” she said. She had a “second childhood” with Cave, wherein she learned not only about art and the art world, but she learned how to navigate the social world of adults, learning from him that the most important aspect in everything was commitment. In the twelve years she spent with him, she watched him go from small features in Fiber Magazine, to international acclaim and the cover of ArtNews. Chicago’s art community encompasses “a lot of artists working in a social practice relating to justice,” she said, “and there’s a support system for other artists who recognize we are part of this community for justice.” 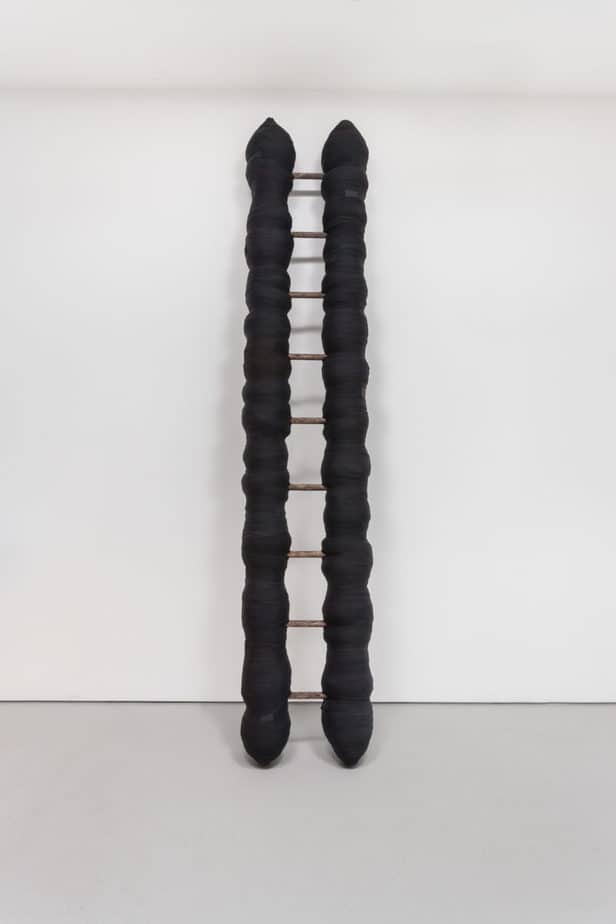 Cheryl Pope became a fighter by necessity, to save her own life, and then literally became a fighter, a boxer, in fact, of some real skill. “I played sports all growing up, I played basketball  and then as an adult I did boxing, I competed,” she said. “With boxing it came a couple of ways. My grandfather, John Pope, won the Golden Gloves in Chicago, so I wanted to continue that history.” But boxing was more than just a filial obligation, as Pope also used the ring as a sort of research space. “I like to put myself in situations where I don’t know,” she said. “You think you know yourself, but you don’t, and I wanted to extend that. When I’m in the ring and I’m just sparring, how do I restrain myself, to not go full out? But then when I’m in a fight, to hurt somebody and then continue to hurt them? I wanted to extend that, so I wanted to knock somebody out and see, what do I do when I knock somebody out? So just the psychology involved in all of it.” 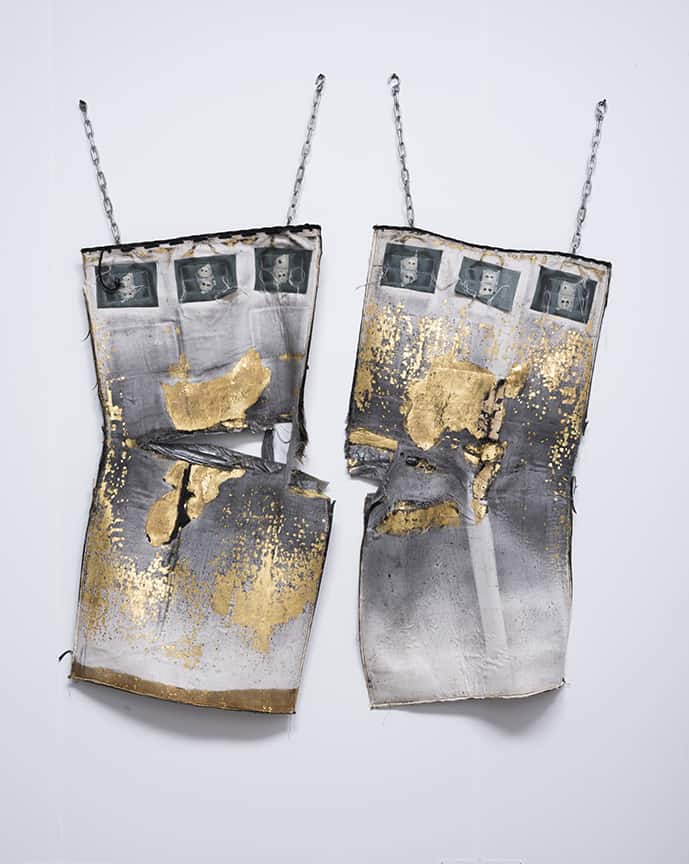 Cheryl has a clear idea of why she began her boxing career, and now that’s it’s over, she considers the reasons for getting out. “It’s tricky,” she said. “I stopped boxing because what was helping me unpack some history was starting to come back around. One of the things I found is that boxing is about tolerance, because the body can start tolerating more and more hits. So when you start sparring you have a headache and your body is like what the hell is going on?  We are getting hit all over! And then eventually it doesn’t hurt. So it becomes tricky because you’re building confidence and you’re building tolerance, but maybe not necessarily a good, healthy tolerance.” 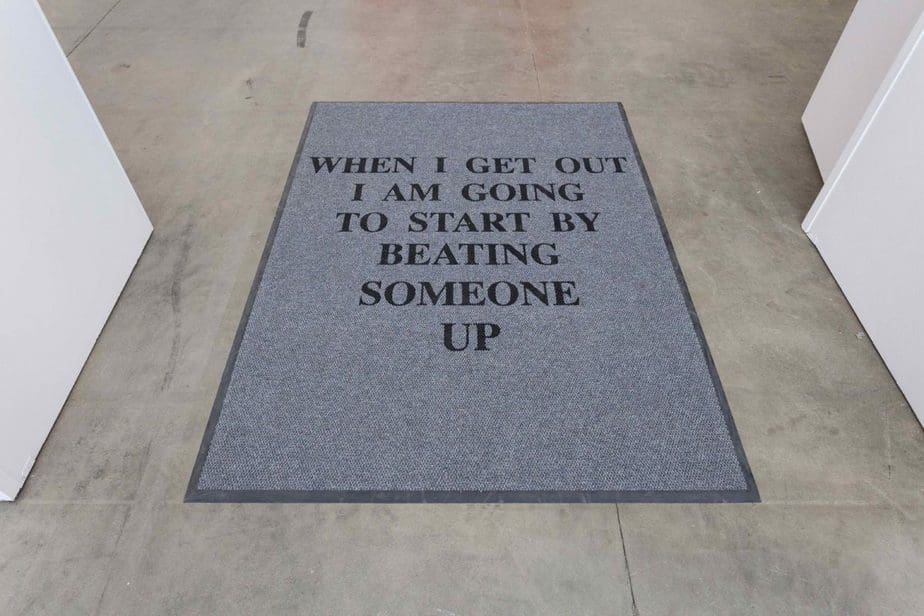 And like her arts collaborations with young people, Pope has also brought her boxing expertise to the Chicago community, leading free classes for kids, including some from the School of the Art Institute, at Franklin Street Boxing, where she trains. In the North Lawndale neighborhood, THE BLOC, an after-school program where high school kids are mentored while training to fight in the ring, is another venue at which she has volunteered to train kids. “I’m trying to use it as a way to make bridges-to put people in a room who might not be in the room otherwise,” she said. 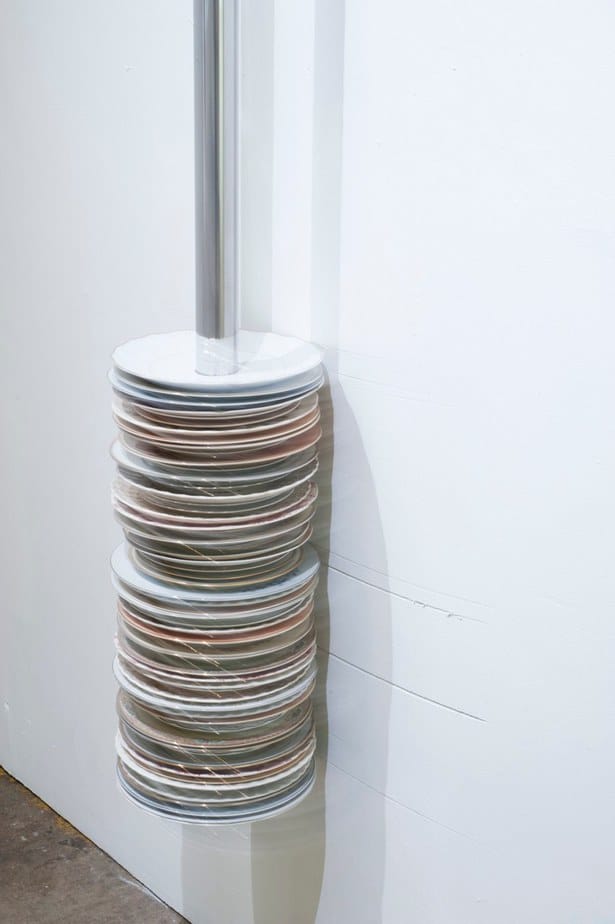 I asked her about the first work of hers I saw, at EmersonDorsch gallery in Miami, in 2011. TICK was a polished stainless steel pole at the end of which were a stack of porcelain dinner plates. A motor hidden behind a wall sways the sculpture side to side like a pendulum. The plates etch furrows in the wall, and the movement makes an eerie, screeching sound that resounded throughout the gallery. That work, along with another plate-centric work, STACKS, channel the boredom of domesticity, and the mechanistic chores that (mostly) women have done in our society. Pope’s new work has her connecting back to that early plate work. “I’ve always had two tracks, the social justice engagement and public stage that I’ve been focused on for the last couple of years, and the more private, like the plates,” she said. “They are similar in terms of research, but how things play out in the domestic space and within, that relates to a more personal biographical experience.” Pope’s new work speaks to “issues of power, gender roles, and tolerance, and how objects and materials within a domestic space hold these ideas.” 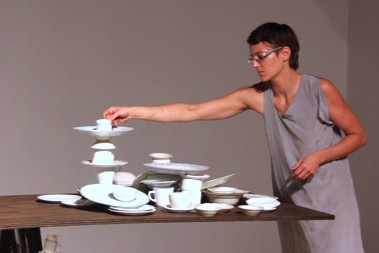 For Cheryl Pope, there is still one question left unanswered. So how does it feel to knock someone out, I ask? She laughs. “It feels good! Like I didn’t know it would feel good. When she fell to the ground, I wanted to just keep hitting her. I saw video of it and I’m jumping up and down ready to go!” Pope officially “hung up her gloves” in 2017, but although The Boxer has retired from the ring, as Paul Simon once sung, the fighter still remains. 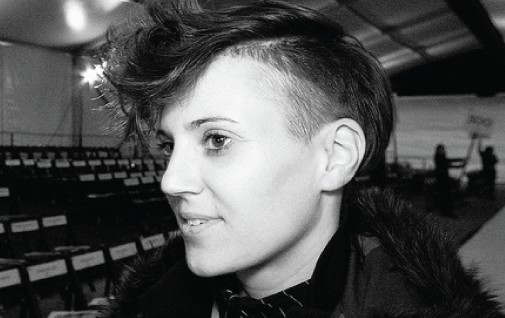 All images courtesy the artist and Monique Meloche Gallery, Chicago, except where noted.