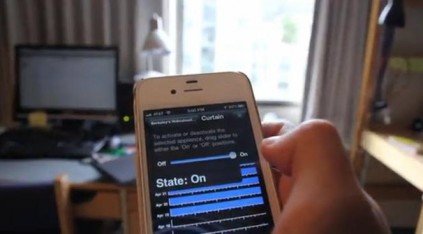 UC Berkeley freshman Derek Low has quite the imagination. Using $200-$300 worth of over-the-counter material, it took Low three months to complete B.R.A.D. (Berkeley Ridiculously Automated Dorm) and since the video of the system went viral, Low’s entertaining and creative innovation has been the talk of the campus.

Controlled via wireless remote, voice recognition, tablet, and mobile phone, B.R.A.D. transitions from sleep mode to party mode in the crank of a curtain and a spin of a disco ball. Some the features include:

• Lights and stereo activated by the morning’s alarm clock.

• Blinds that can be controlled by a smartphone or tablet.

• A “romantic mode” that pops on music and a soft-lit disco ball.

However, not all the attention Low has been receiving is positive. Despite Low’s adherence to the campus’ “no-nails” rule and an electrician finding nothing hazardous about the set up, Berkeley officials are seeking to reprimand Low for “vandalism”, among other charges.

Low stated that the whole system can be cut down (he used tape instead of nails) and said the project is about innovation and creativity.