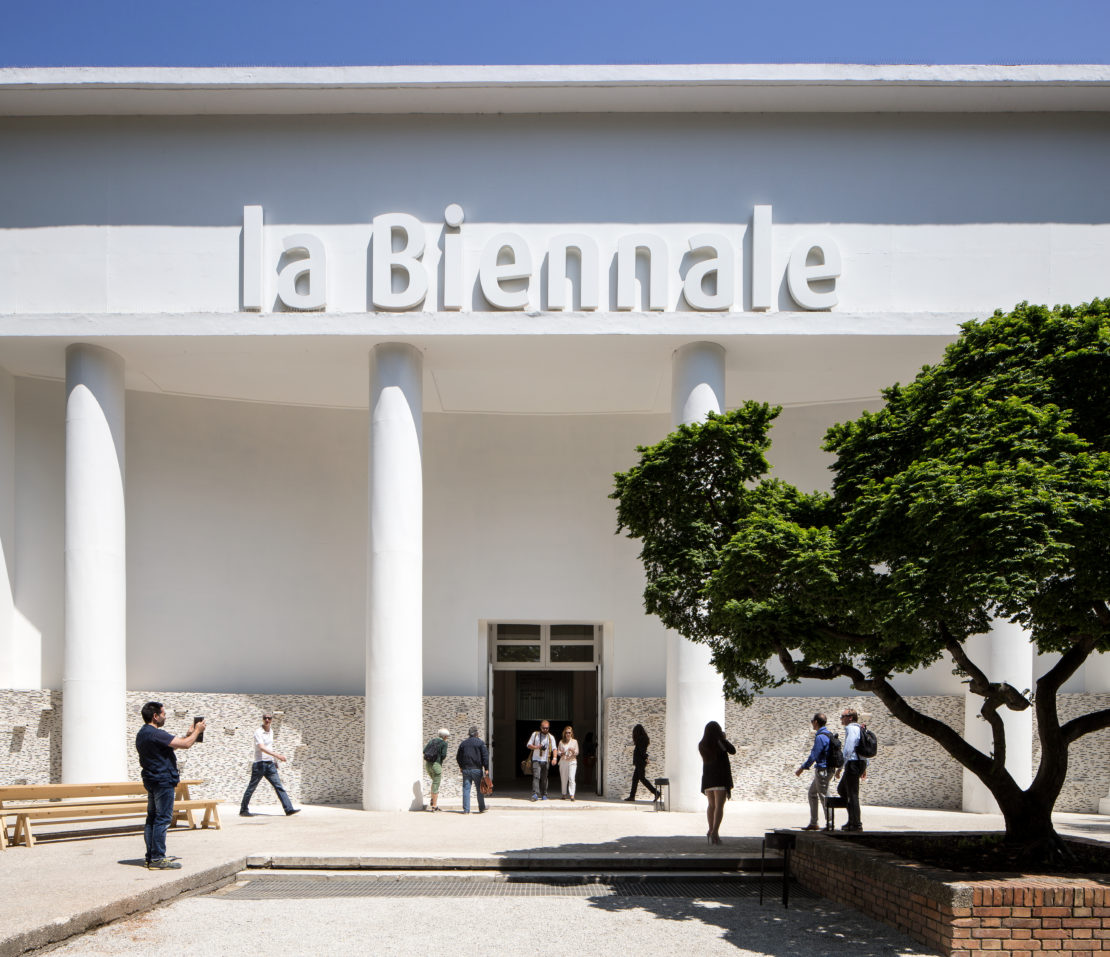 The human body with its presence, absence, and agility define the most visceral and accessible national pavilion presentations at the 58th Venice Biennale. Titled “May You Live in Interesting Times” and curated by Ralph Rugoff, this biennale was split between Rugoff’s curatorial conceit and the various country’s presentations at both the Giardini and Arsenale sites of the Biennale. This year’s iteration met with several own challenges: for example, despite committing to the biennale both Algeria and Venezuela failed to open their respective pavilions during the event’s opening weekend. In general, national pavilions either went the apolitical route or confronted politics head-on. Those who did approach politics overwhelmingly did so with allusions to bodies: governmental, personal or otherwise. Whether exploring the human form through film, installation, or portraiture, representations depicting our shared humanity remain integral to the biennale’s offerings in our current, fraught political moment. This common thread of empathy linked several of the top offerings at the 58th Venice Biennale.

These evocative artworks on view at the 2019 Venice Biennale draw from our shared experiences as citizens representing many nations, regions and social classes. These works draw from the wellspring of human emotion: doubt and exhilaration, failure and redemption. To paraphrase philosopher David Hume, this biennale took to heart the exhortation to be…” a philosopher but, amid all your philosophy, be still a (hu)man.” Replace philosophy with art, and you’ve arrived at locus situating all of the most compelling exhibitions on view for visitors to experience at the 58th Venice Biennale.

With a fun twist on the “Top 10” format for most biennale exhibitions, we’ve attributed qualities in a lighthearted manner to our 8 selected pavilions for the 2019 Venice Biennale. This hopefully adds a fun touch to the selections, allowing them a more human “persona.” It’s key to remember that during trying times of populism, anti-immigrant sentiment and the rise of right-wing governments, it’s important to recall our shared humanity, remain humorous and critical and find common ground in empathy. We have highlighted some of the most uplifting and thoughtful national presentations below–make sure to stop by this summer and record your own reaction to these compelling presentations! 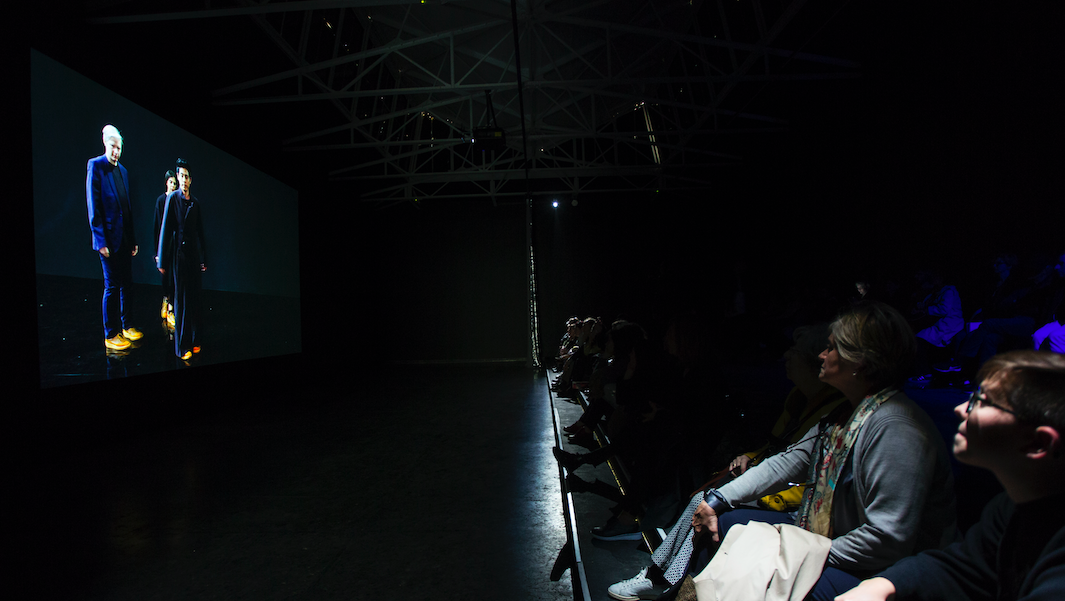 Dance has frequently been called on to serve as a record for political resistance, from breakdancing in the 1970s-80s in New York City’s to Capoeira’s role in promoting resistance fighting techniques for slaves arriving in the 16th century across Brazil. The expressive qualities that the human form exudes through dance can be inspiring and cathartic. Boudry & Lorenz create an experience for visitors to the Swiss pavilion that remixes dance movements both in forward and reverse motion for their phenomenal “Moving Backwards.” Coupling this film with a statement on view at the pavilion that expresses dismay at the regressive and nationalist movements sweeping many nations in today’s contemporary moment, the artists examine how subversive behavior – individually or in collective gestures – can defy conservative ideology and open up worlds of self-expression during moments of vulnerability and human connection. 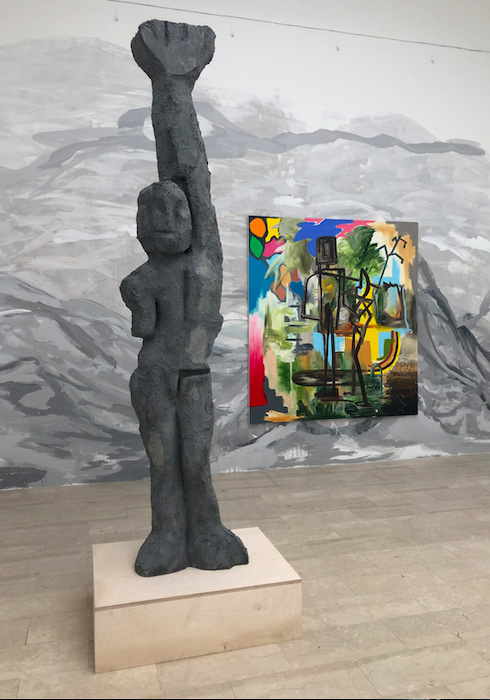 Utopic strains of thought thread together the exuberant representational sculptures and outsider art leanings of Ozbolt’s presentation at the Serbian pavilion. The artist manipulates the walls of the pavilion itself as a canvas, creating hierarchical worlds of mimicry that echo throughout the space. Human form and memory forms a delicate dance throughout the pavilion, where three- dimensional forms rediscover themselves in paintings on the opposite walls, and bright colors hold court with neutral tones. Forms from the natural world and modern, geometric stylizations of the figure prevail at Ozbolt’s thrilling (and underrated) presentation at the 58th Venice Biennale.

Most Likely to Throw A Rager: South Korean Pavilion, “History Has Failed Us, But No Matter” 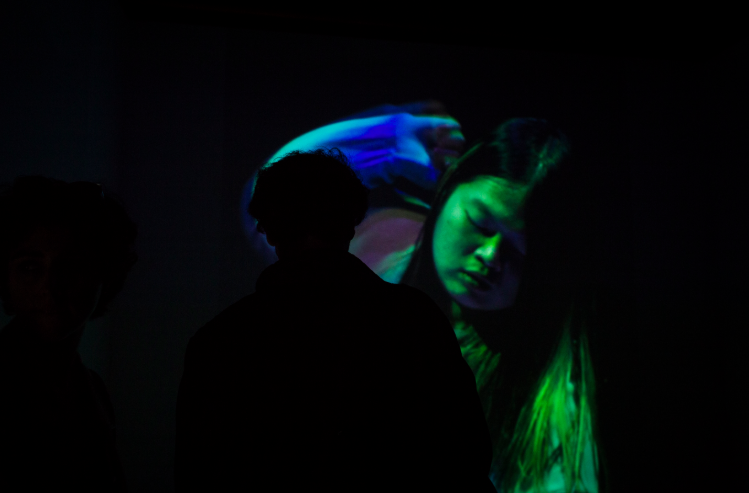 The borders straddling figure and identity blur in this surprising, inventive and engrossing exhibition commissioned by South Korea. Gender and queer theory go toe-to-toe with traditional costume and folk dance at the cleverly designed pavilion, which forms an interface for the visitor that is at once beguiling and discomfiting. young jung’s work in particular, “A Performing by Flash, Afterimage, Velocity and Noise,” is remarkable in its breadth and immediacy. Viewers enter a room where they became immersed in sound, light and narrative: a space in which heteronormativity becomes subject to the disorienting hegemony of queerness, other-ness and marginalization. This particular installation, as well as the overall pavilion design, make for an enthralling space for encountering contemporary art in South Korea at the present moment.

Most Well-Rounded: Dutch Pavilion, “The Measurement of Presence” 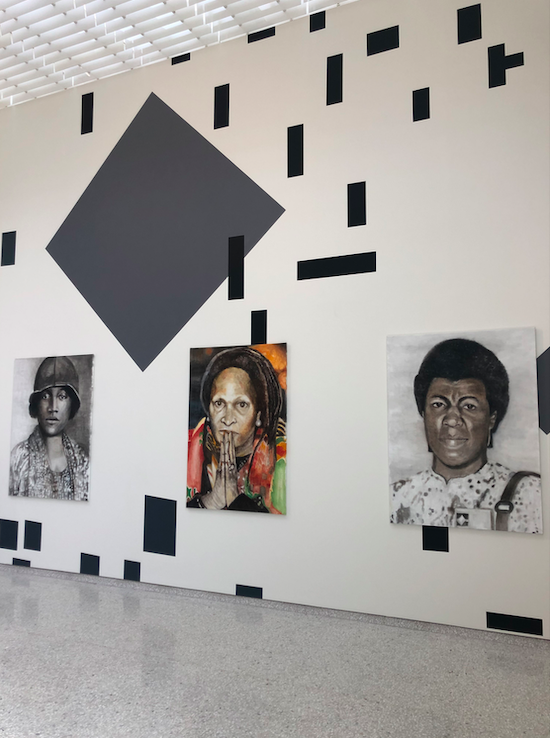 De Stijl and humanist portraiture collide in a setting mitigated by geometry in this compelling presentation of works at the Dutch Pavilion. Contrasts confront the viewer, as Kensmil’s portraiture seemingly clashes with Jungerman’s minimal, geometric constructions. Yet the two artists root their practice within folk practice and indigenous tribes in Suriname, where the two artists trace their roots. These Dutch artists take on the weight of Dutch modern art canon and Flemish portraiture, their work grappling with histories both personal and political. A subtle exhibition that unfolds the more that one explores it, the Dutch pavilion raises questions around the subjectivity of identity and memory: can someone bury a portrait in clean lines, and can a portrait sum up the data contained within centuries of postcolonial history? Raising more questions than it answers, the Dutch pavilion closes the gap between individual and collective identity. 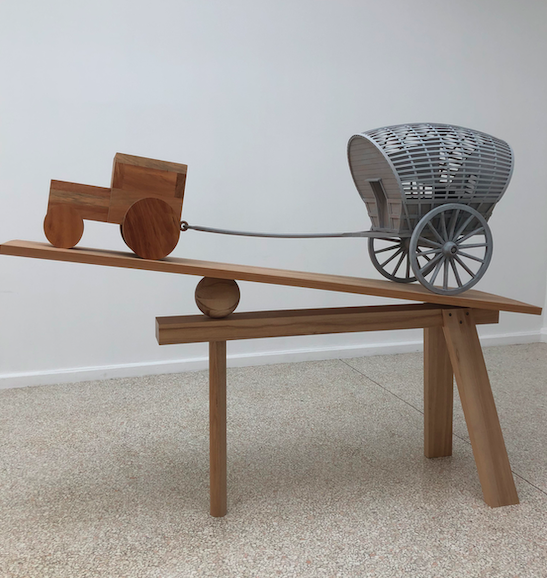 A simplified yet critical elegance threads through Puryear’s work in this iteration of the American pavilion. Kamin Rapaport of the Madison Square Park alliance in New York City directs the curatorial vision of this presentation, which begins with a monumental outdoor sculpture – Swallowed Sun – before dwindling down to a more human scale in the pavilion’s interior. Puryear is known for his large-scale installations. It becomes rewarding to see the artist’s personal lexicon re-purposed as a medium by which to remark upon the movements and civilizations that have ebbed and flowed throughout American history, specifically referencing the role that the institution of slavery holds over our past and our present. Puryear’s work is studied yet emotional, hitting that rare evocative nerve that knows exactly how to edit information for the viewer so that they are forced to infer the meanings latent within the works on view. 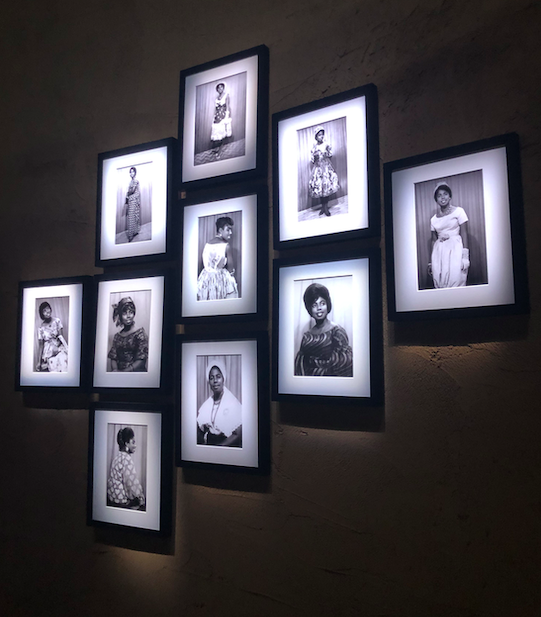 An astounding presentation as a first foray into the Venice Biennale, “Ghana: Freedom” alludes to the song “Ghana Freedom” which celebrates the birth of the nation’s 1957 independence. With powerhouse advisors David Adjaye and Okwui Enwezor (RIP), the pavilion hosts a variety of art world superstars, including El Anatsui and Lynette Yiadom-Boakye. Abstract and figurative intersect, with Ghana providing a stunning survey of works by the many talented artists working in mixed media, painting, photography and more. A must-see – particularly thrilling given Sir David Adjaye Obe’s interior designed to reflect traditional homes in Ghana. Each artist has a space to call home, to experiment with medium and representation, and to find their own personal sense of freedom within a wider pantheon of artistic expression. 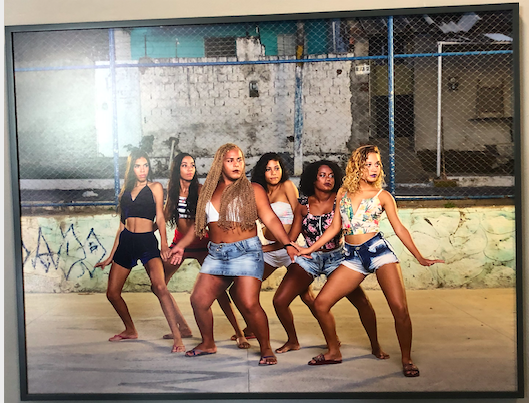 What’s more fun than Brazil? Brazil at the Venice Biennale. The country continues to produce dizzying and entertaining, yet thoughtful, pavilions for the biennale. In this iteration, “Swinguerra” – a play on the word for a popular north Brazilian dance trend and the wod for “war” in Portugese, Brazil celebrates non-binary gender identity and queer expression through the lens of alienation, inclusion and vibrant dance performances. Reminiscent of the Braizilian carnival ‘schools’ formed by dance troupes while also creating a vehicle through which these performers can transmit their lived experience, “Swinguerra” is an unapologetic look at the Brazilian culture and its changing contemporary socio political landscape. 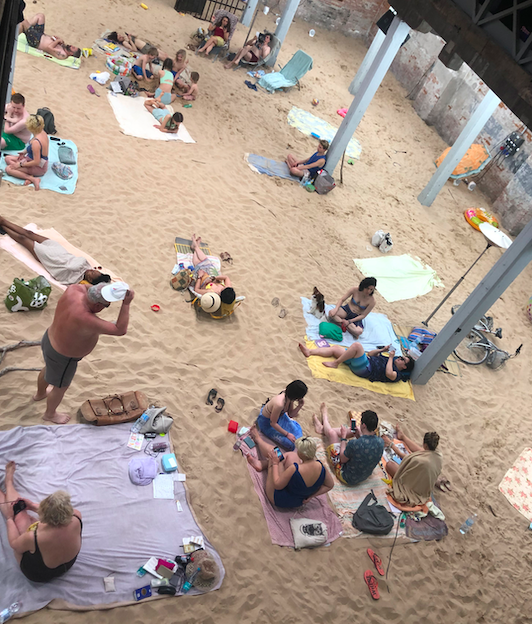 Billed as an “Anthropocene opera embracing the summertime beach,” the Lithuanian pavilion meets at the delicate point connecting performance art, surrealism and humanism. A tableau of beachgoers relaxes at a man-made beach situated at a former military marina (used for the first time for this Biennale), where by turns they sing a libretto centered around the parameters defining leisure in the contemporary. Lyrics embrace objects for the beach assembled in China, while self-consciously meditating on the restrictions and freedoms attached to our everyday life in a time of climate change and environmental turmoil. Children frolic and pensioners play crossword puzzles while the dizzying path of humanity in our current cultural malaise sweeps through the scales that delineate the soundtrack of this Golden Lion-winning pavilion.

In contrast to the vibrant depictions of humanity listed above, it’s important to note the somber note exuded at the Venezuela pavilion during the Biennale’s opening weekend. A defiant yet empty structure stood bereft of guests, with a handwritten sign proclaiming in Spanish: “Destroyed, how they destroyed our country.” There are moments in time when reality supersedes the creative impulse, and we stand united with our brothers and sisters suffering in this time of need during Venezuela’s upheaval. We encourage readers to become familiar with opportunities to exercise empathy of their own in supporting populations fleeing desperate situations in the country while the political situation remains uncertain. We also continue to believe in the power of art and the creative impulse to bring people together and exercise empathy on an intimate scale, a personal scale: a human scale.