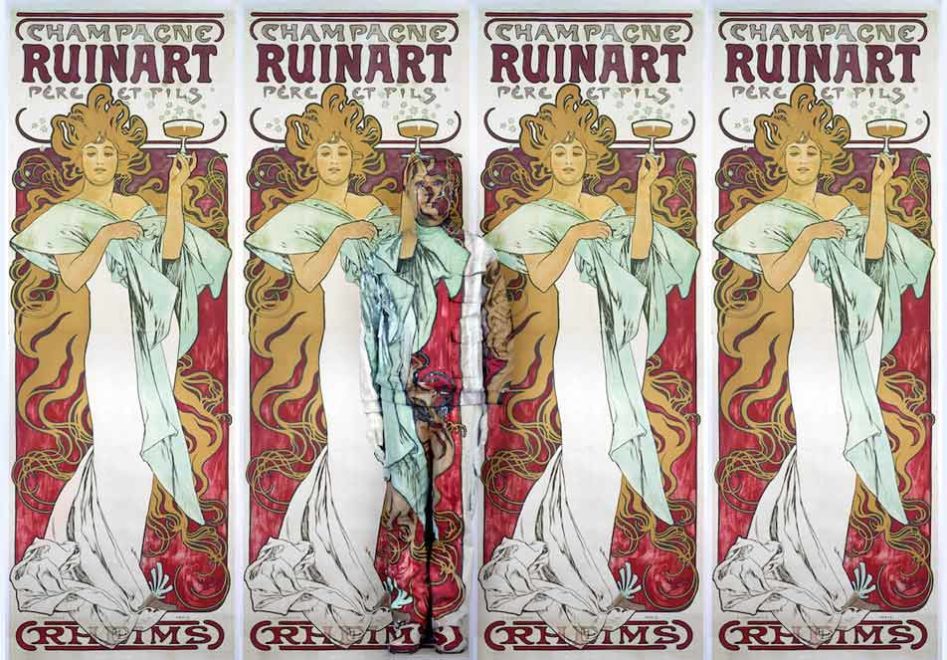 Known as the Invisible Man, Chinese artist Liu Bolin is the latest contemporary artist to be commissioned by the House of Ruinart to collaborate on a creative project for the art world’s favorite champagne. Featured at art fairs around the world, Ruinart has a long history of working with artists and designers in residence to annually create a project that gets exhibited in its lounges at Art Basel in Basel, Hong Kong and Miami Beach, as well as Paris Photo, Expo Chicago and the Frieze Art Fairs in London and New York. 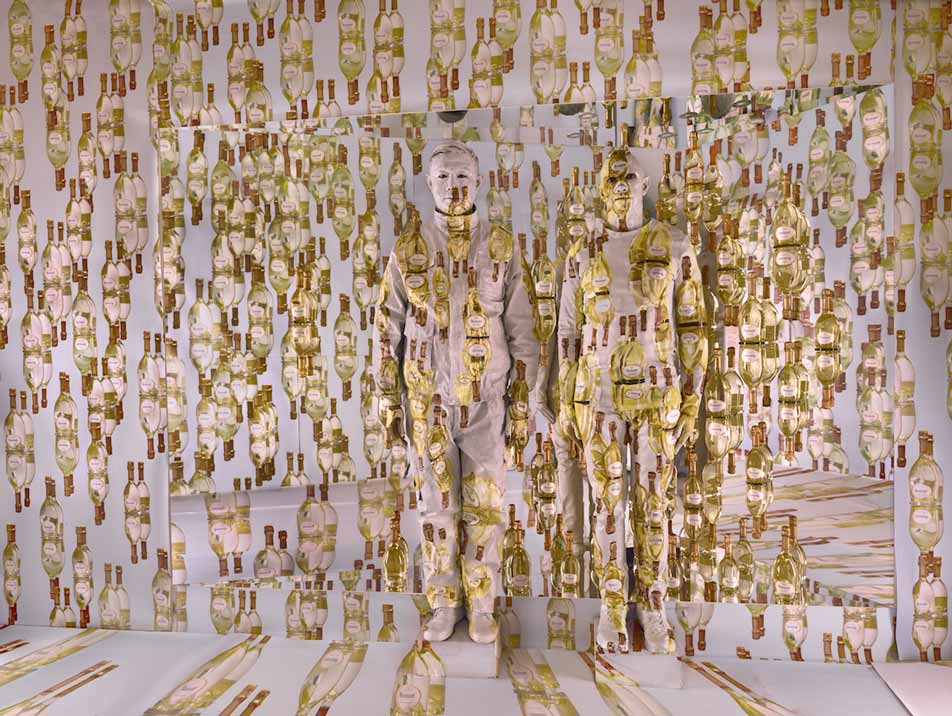 Quiet Lunch caught up with the globe-trotting Bolin at Frieze New York to talk about the history of the creative process for his performative work—where he gets meticulously painted into environments and becomes nearly invisible in the finished photos—as well as his recent residency and collaboration with Ruinart.

Quiet Lunch: How did you start making art where you are painted into the picture?

Liu Bolin: In 2005, my studio was demolished by the Chinese government and I protested by making this kind of work.

QL: What did you paint yourself into to protest?

LB: I camouflaged myself in the rubble from the destruction of the building, among the walls that were demolished and the debris.

QL: Did you apply the paint yourself or did someone else do it?

LB: From the beginning, I’ve had other people paint me because it’s not possible to do it myself. 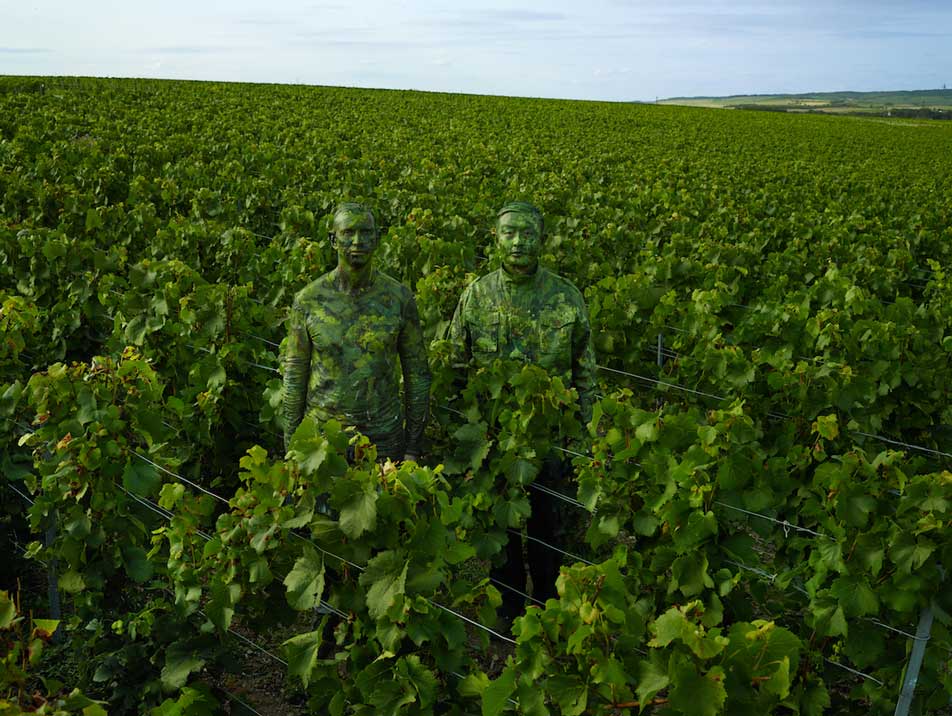 Liu Bolin, Hiding in the vineyards with the Ruinart Cellar Master. Courtesy the artist and Ruinart

QL: Where were you living at the time?

LB: I was living and working in the art district in Beijing.

QL: How did you decide that photography was the best way to document and share the action?

LB: It wasn’t my original intention. I first thought to make a video of the intervention, but I came to realize that the recording did not look good. It was impossible to stand still and not move at all so photography became the option of last resort. 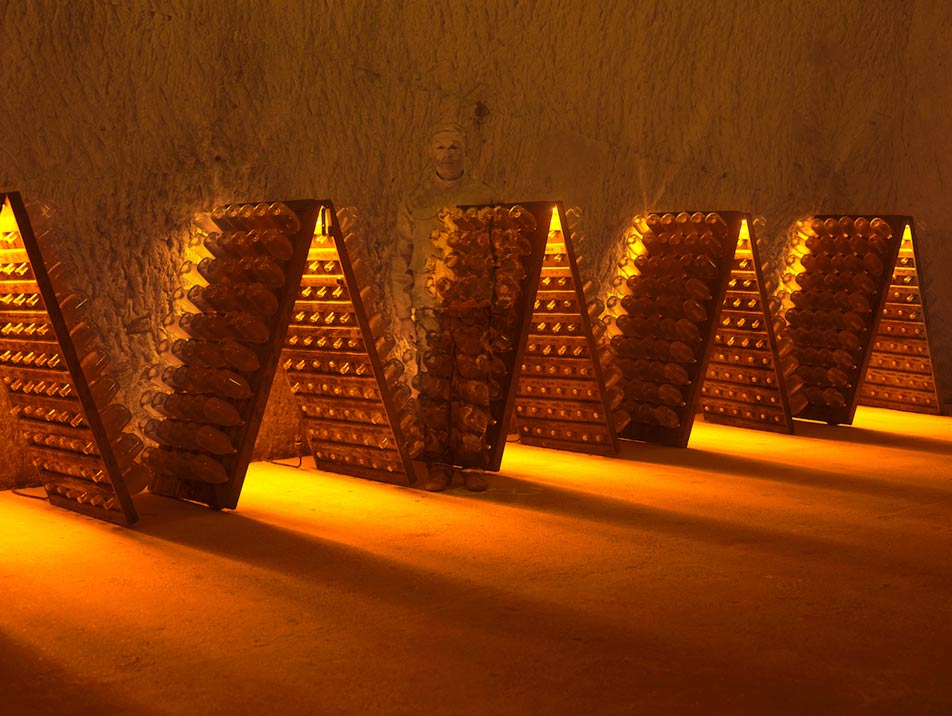 QL: Did you show the work in China, start selling and then have the money to travel?

QL: Did you think that you would go someplace else and make your work there?

LB: Not exactly. The first place I traveled to was Italy, where I was invited to take part in a group show. At the time I really wasn’t thinking about working abroad.

QL: How many places have you traveled to and painted yourself into the environments there?

LB: It’s countless. The first time was in London in 2008. There have been many more over the past 10 years.

QL: Have you traveled to all parts of the world?

LB: No, I still want to go to Africa and Australia.

QL: What do you find the most rewarding, creating the action in a space or seeing the final result and showing it?

LB: I think it’s more about the final work, the final product, but I do enjoy standing there and taking control of myself to stay still, even though it’s a bit of a masochistic process. I might even enjoy that process more than the final work.

QL: Do you consider yourself a street artist, like JR?

LB: Not really—I just identify as an artist because I also make other kinds of work, such as installations and painting and sculpture.

QL: Does it bother you to be discussed in that context?

LB: It doesn’t matter. People have their own viewpoint, but I know who I am, which is the most important thing.

QL: I guess the good thing is that someone is talking about you, right?

LB: Yes, I think I’m very lucky, because there are many talented artists who don’t get the opportunities I do. You made a good point—whether the talk is good or bad, the important thing is that you are being discussed. 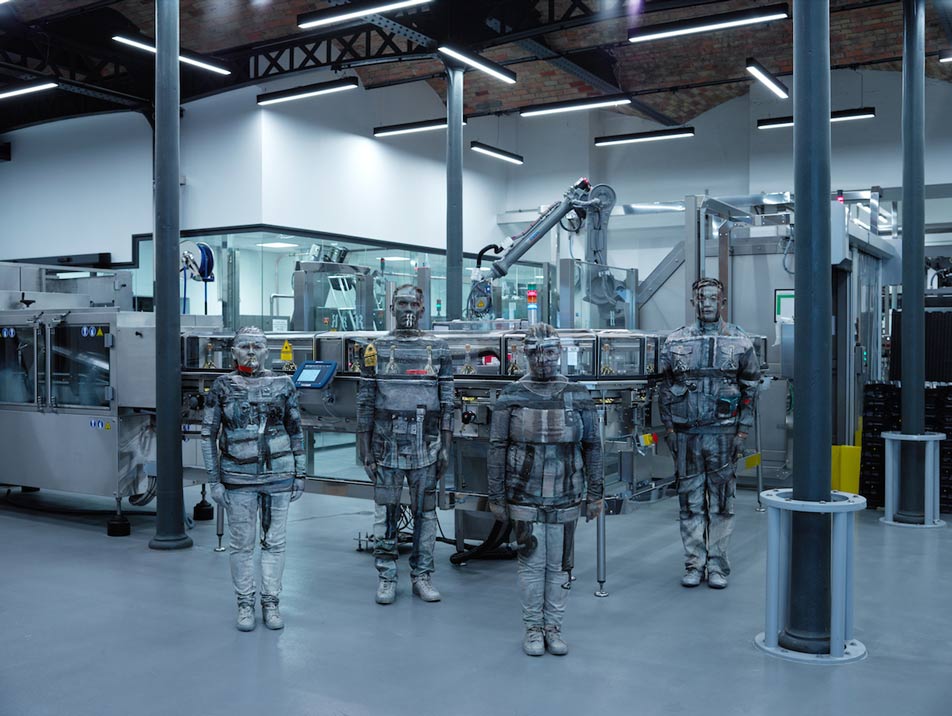 QL: How long does it take to be painted into a situation and be photographed?

LB: It can take anywhere from one day to three or four days to stage a piece, from start to finish, depending on the site and the weather.

QL: Is it like in the theater or film production where a person is playing a character and has to be made up?

LB: It’s similar but not the same. For me, the plot repeats itself in these sets, but for actors in film and theater the plot is always changing. My process involves repeating feelings and when doing that I think my feelings go deeper. What that means is that I communicate with the spirit, with my soul. This process has been going on for more than 10 years so it’s become a body/mind and body/spirit condition.

QL: Let’s talk about Ruinart. How did this project come about?

LB: It goes back to when I first exhibited in Paris and they saw my work. When they approached me some years later I was already aware of their yearly artist projects, but unsure as to how I could fit. Once I did my research and understood the history and process of the company and how it made champagne, it eventually came together.

QL: Did you create the sets for the photo shoots?

LB: Some of the backgrounds were already in existence, such as the old posters by Alphonse Mucha, who was the first artist to collaborate with Ruinart in 1896. The cellar, too, has existed for a hundred years. I requested the mirror set with the multiple bottles, but it turned out a little different that what I had in mind. However, it still worked for my purpose.

QL: Do you paint right over your clothing?

LB: No, I always wear a standard Chinese military suit.

QL: Who are the other people in the pictures?

LB: They are people involved in the production of Ruinart champagne.

QL: Did you drink the champagne?

QL: I know that it comes in magnums. How much di you drink?

LB: A lot, but not while I was working.