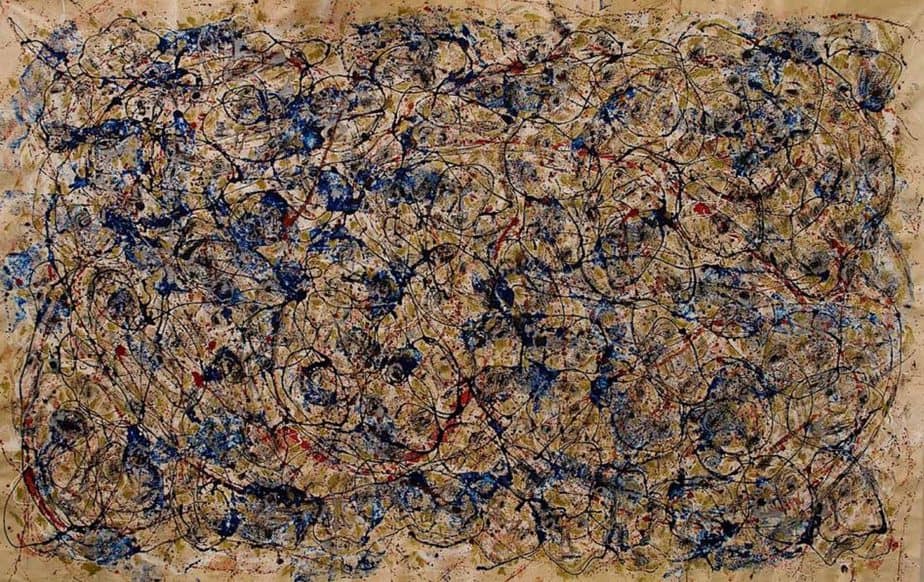 At Georges Bergès Gallery, a work called Punch Them Hard, sequestered in the back room, is a left over from a recent era of the featured artist’s previous work. It combines a sea of faces representing the masses that provides a solid background pattern for foreground imagery that, unfortunately, seems all too fresh and vivid. In silhouette, anonymous thugs are kicking a body on the ground at a rally, while Candidate Donald Trump in the foreground displays a self-approving, crowd-pleasing double thumbs-up.

After a closer look, the background bedrock resembling peacock feathers rendered in monotone came to life as an array of dozens of human facial expressions—longing, crying out, looking bewildered. So why might this show called Distorted Happiness? Distorted, yes, but happy? 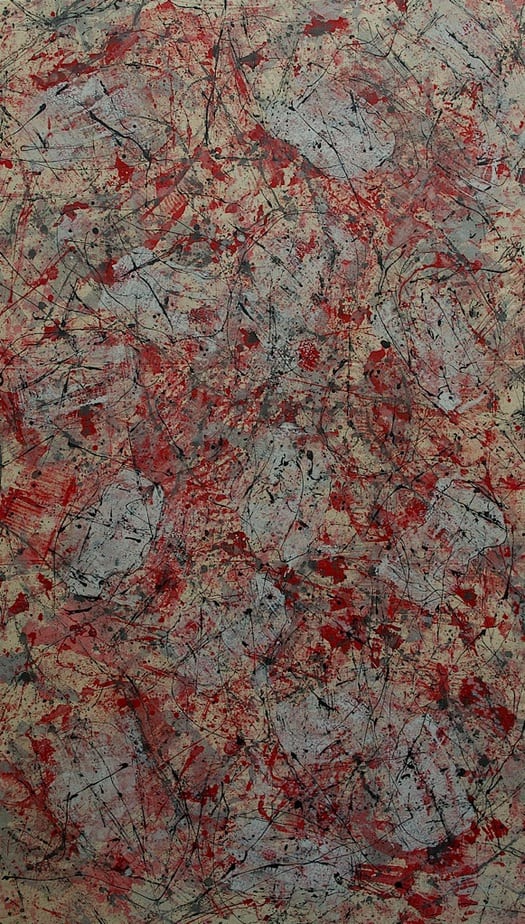 Perhaps because the gifted painter Johan Wahlstrom has moved on to more subtle ways of handling the same content and he shows great ease in doing so.  Previous periods that show monkeys saluting Trump and Putin or people hugging while secretly staring at cell phones in a show called “Social Life” have been replaced by a new series of works depicting the same complex, ambivalent emotions, but now expressed more as mysterious and ethereal phantoms, expertly proclaimed via bursts of color. “Deformed beings represent our collective fears and anxieties,” the press release reminds us. But the placement in the back room reminds us that only “Punch Them Hard” is how Johan used to work albeit very recently while works called Distorted Meeting, Distorted Reality, and Distorted School represent new sentiments this show reveals.

Distorted Meeting is a composition of rich, earthy tones, similar to Distorted Reality but with less of a yellowish tint. The work called Distorted School also utilized the rust-colored palette but this one has emanating freehand zigzags and trajectories spreading toward the canvas edges in nearly parallel lines.

There are twenty masterful paintings in Johan Wahlstrom’s show at Georges Bergès Gallery. At least seven employed the warm, earthy savory tones of these three works. All but two of the ones that are not rust-colored are among the largest works on display. So Johan Walstrom seems to save his largest new expressions for more primary portions of the spectrum. 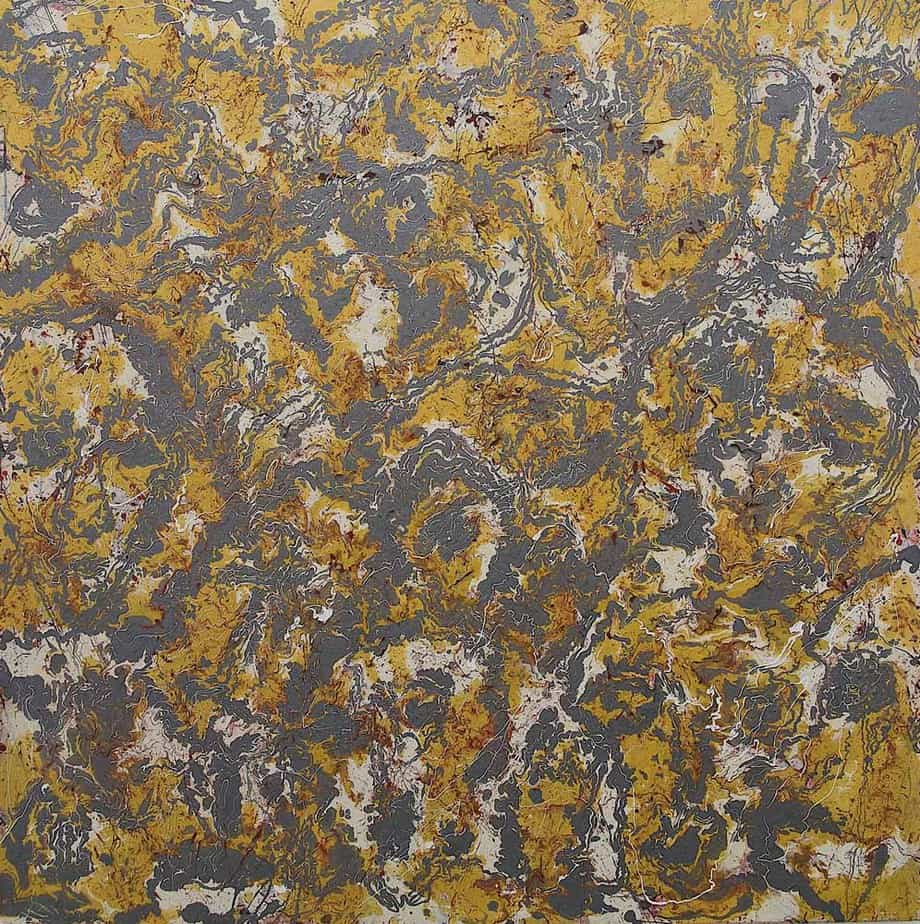 Taking this beyond the extreme, there were also three mostly black paintings, each unique and very individual efforts, perhaps suggesting future (or former) developments. Two of these darker works employed a very small canvas size, as if to announce even newer directions—but with the smaller sizes suggesting tentativeness. The painter seems to be undergoing changes—rapidly. The third black painting was a more bold, larger tribal work called “We Keep Searching For The Truth” in which newspaper fragments were covered with acrylic and then scraped and sanded with the matrix of faces again. This is clearly a transitional work but is it segue-ing into or out of his current body of work? There is a lot of seductive mystery here with very few answers other than the shapes and colors themselves, or in this particular case, rough-hewn black.

Johan Wahlstrom was born in Stockholm, Sweden and is currently living and working in the Mana Contemporary arts facility in Jersey City.

A second studio he still has in Marbella, Spain led to his 2008 exhibition “It’s Boring To Die” in Barcelona where  the faces began to break through. Then, using reds, whites, blues and blacks until 2014, he first added hard-edged stencils of “figures, faces, corporations and politicians.”  That was followed by two years of “House Of Lies,” Previously, “Saluting The People”, a project of his work curated by Paco Barragan, had showed fifteen political figures in identical situations. “Aliens With Extraordinary Abilities” showed refugees behind chain link fences.

So the Bergès Gallery in Soho presents his new series “Distorted Happiness” as both a distinct new direction as well as a continuation. Bergès himself, an upbeat young writer/gallerist, tells me his discovery Wahlstrom still sees faces in the tide when it retreats from the shore into the sea, in the patterns of walls and shadows or when he looks down, walking in the street. 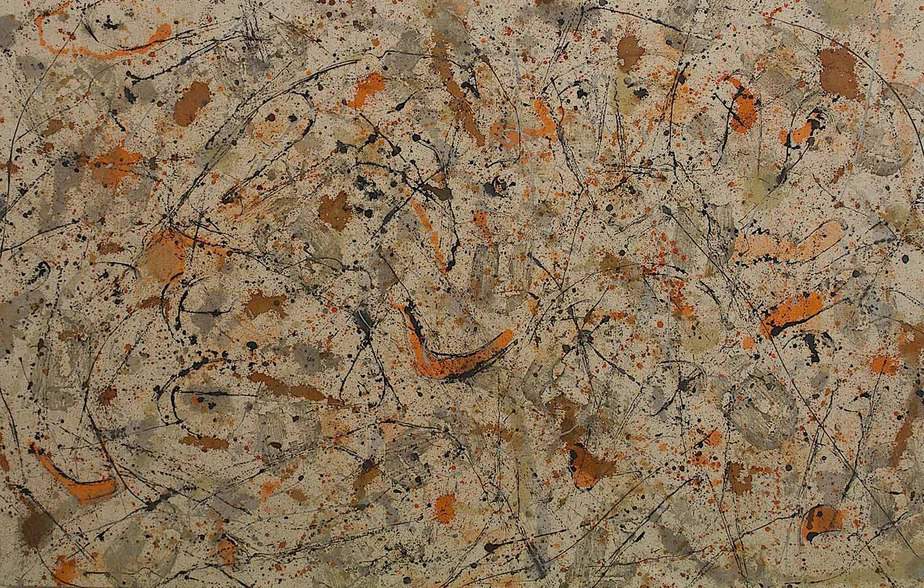 Wahlstrom is the product of four previous generations of artists. He has fond memories of a grandmother who painted. His father, a businessman in the 1960s and 70s, insisted his wife accompany him to social functions, meaning ultimately she could not pursue her artistic gifts, leaving her son Johan to complete the dream. But it did not happen immediately.

When younger he played keyboards and sang in a rock ‘n’ roll band. For 18 years he stared out at audiences with his own band that toured with the likes of Ian Hunter, Graham Parker, and Mick Ronson.

He explains the “distorted faces” have now become “almost abstract to show the emotions and expressions” of the masses they depict. I believe that all of us take part of our society´s debates and questions and not only when it is election time.” 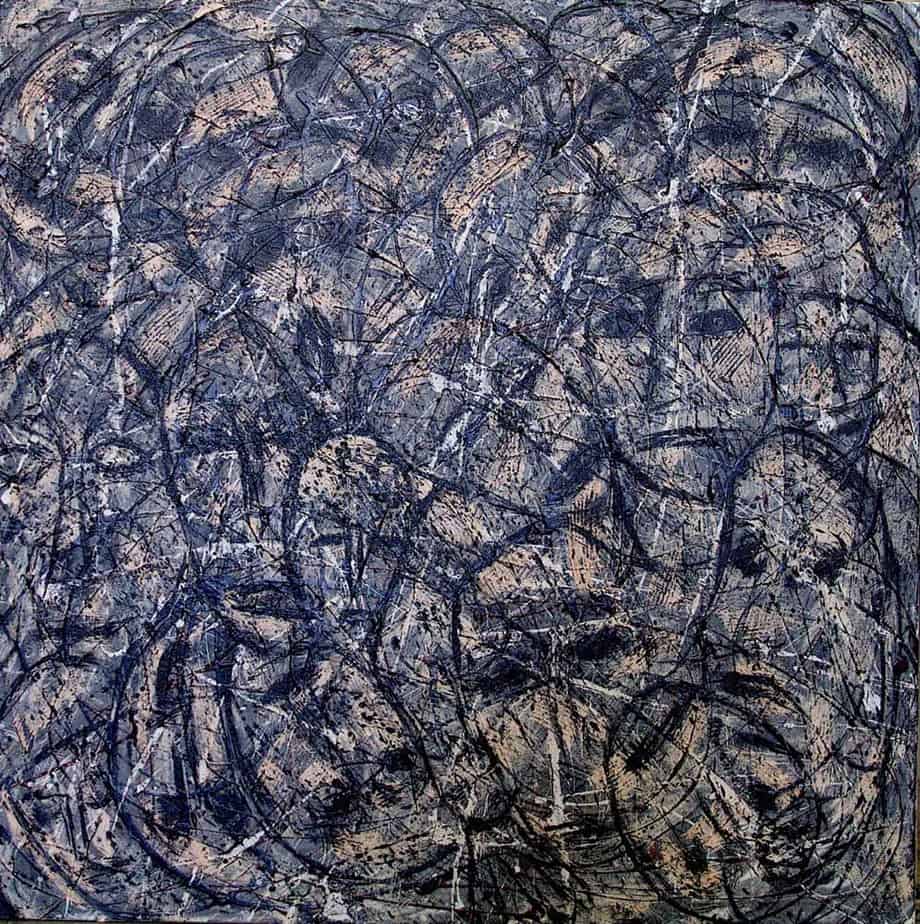 A gentleman who walked into the gallery behind me was surprised this was not a Jackson Pollock show. A closer look at Wahlstrom’s work revealed the Jean Dubuffet-style faces that make an appearance in almost every work and separate him from Pollock. Wahlstrom’s canvasses, while dense, have a lighter feel than those of the Abstract Expressionist. Some of his dripped paint lines are so sylph-like than I could not imagine one splattered thinner or wispier.

In Feeling Intense, fine white jiggly lines completely cover a single black, red and gold face that reminded me of the image of an alien seen staring at the camera at the end of the credits in the initial season of Star Trek. As the theme music would swell and “A Desilu Prouduction” in distinctive yellow type was emblazoned across the family TV screen of my youth, a red and purple and blue alien life form would stare out at me, the unsuspecting viewer. I realized this was the same uncomfortable feeling elicited in me while looking through the top layer of Wahlstrom’s attenuated white squiggly paint drips.

A couple of the other paintings reminded me of Van Gogh skies interrupted by Art Brut red faces and hands—subtly hidden amongst all the activity. In another work, what I thought was negative space were actually white blotches poked onto the surface. When I entered the gallery I was immediately struck by a large red, white and pink work that almost succeeded in stopping me from spotting a white Matisse-like face hovering just above the horizon line.

I was told Wahlstrom’s previous works were painted hanging on the wall with the new, more abstract ones, always on the floor. But that some of these works contain both variations in the same canvas. 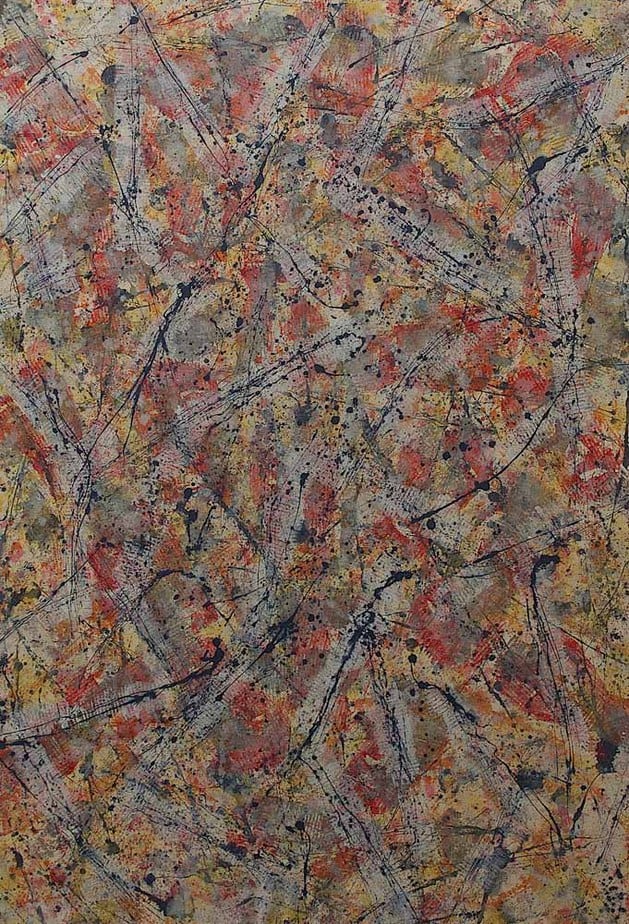 The artist’s long-term goals are major museums and auction houses “once the time is ready.” He explains how the four P’s: Place, Promotion, Price and Product apply to art. “Marketing is to me very important.” We even discuss a small “place” on the Lower East Side and how it could be harder to find than a large gallery in Soho where Leo Castelli used to be, depending on the era. In fact, Castelli and Sonnabend Galleries were nearby the current Georges Bergès spot, back in the day. “The relation between being in a gallery that is in a good place,” the artist says, “with a product that is priced correctly, makes a huge difference.” Such principles are “so true and relevant when it comes to art as well as any other product or service.”

Wahlstrom has been seen in important group shows in Europe with artists from Gerhard Richter to Joseph Beuys. The works at Georges Bergès are being grabbed up by collectors.

While Wahlstrom addressed political issues directly in his previous works and he says is still “socially and politically engaged,” these new, more complex and painterly compositions have led to work that speaks more loudly while using a less didactic voice. He said, “I do believe that as an artist, our art should reflect our society of today and I want to be a part of the debate.”

Mark Bloch is an author and multi-media artist living in Manhattan. NYU’s
Fales Library houses an archive of many of Bloch’s papers including a vast
collection of mail art and related ephemera in its Downtown Collection. In
addition to his work as a writer and performance artist, he has also
worked as a videographer and graphic designer for ABCNews.com, The New York Times, Rolling Stone and elsewhere. He can be reached at
bloch.mark@gmail.com and PO Box 1500 NYC 10009. →  Click here for more. ←