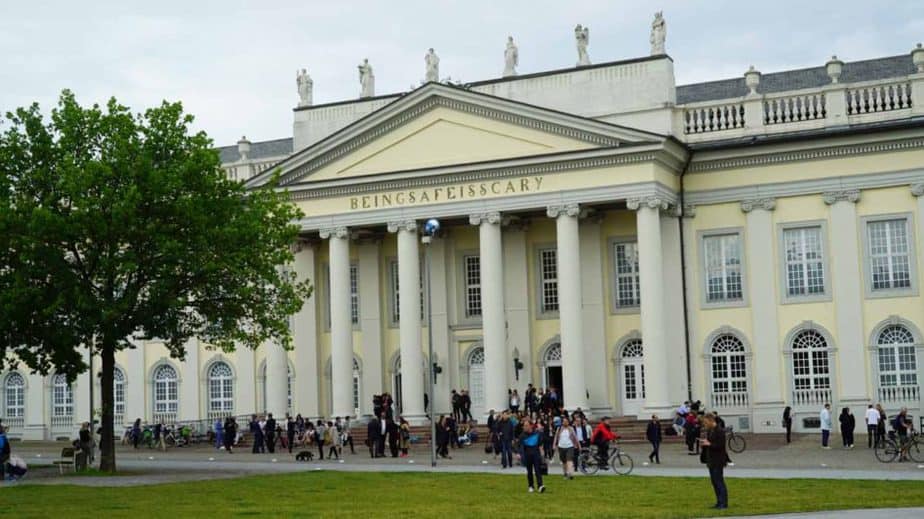 The two most famous things from Kassel Germany are the Brothers Grimm and the quinquennial art exhibition Documenta. This year these two cultural institutions have something in common, they both aim to frighten. 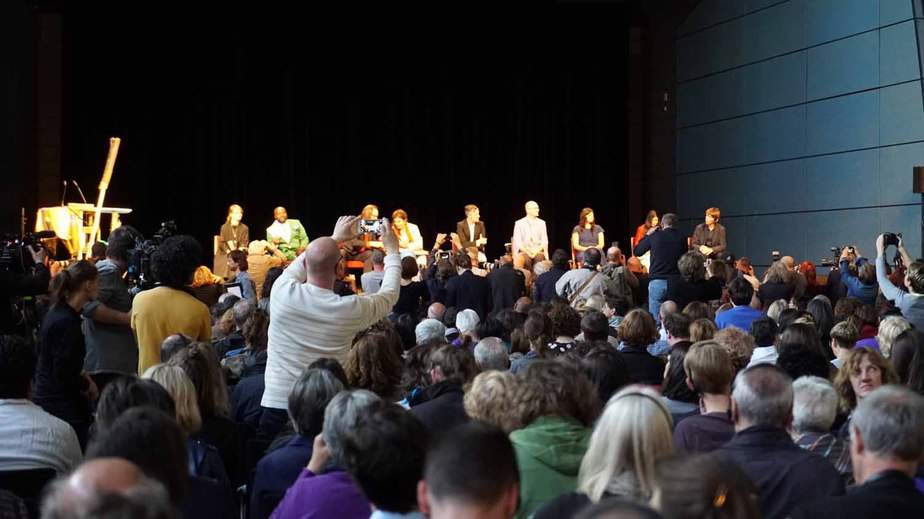 At the opening press conference for Documenta 14 “Learning from Athens” the curatorial staff made it clear that this year’s event was going to be very political and no, they are not happy about the global state of affairs. The first speaker, Curator-at-large Bonaventure Soh Bejeng Ndikung, focused on “certainty as uncertainty”, or how Neoliberal capitalists are the root cause of the world’s ills. Next, the audience was treated to a sermon on gender issues. Public programs curator Paul Preciado remarked that “Neo-fascist discourses have at center nationalist identity and white heterosexual power.” An hour in and little mention of the art or the exhibition, the crowd that was being preached to began to leave.

Politically, as well as culturally, the big news happened in April with the launch of Documenta 14’s colocation in Athens Greece. This is the first time since Documenta was founded in 1955 that a second location is being used. Athens is the brainchild of Documenta 14’s artistic director Adam Szymczyk and was conceived as a direct response to the 2010 Greek debt crisis. Facing monetary and refugee crises, Greece in 2017 is still a nation at the heart of international turmoil. Paul Preciado says that the program is in solidarity with Athens after the most “insulting” dialogue over the last 8 years.

“Documenta did bring some resources from Germany but, overall, it has been an extractive process. Documenta took a great deal more from Athens—from both its private and public sector—than it gave. Adding the veneer of a left-wing narrative against neoliberalism to a purely extractive neocolonial project that’s framed as a gift to Greece is adding insult to injury.”

German critics fear that the dual location stretches resources and attention spans too thin. In an interview with the New York Times at the April opening, Szymczyk said in response to critics that “No good deed goes unpunished”. 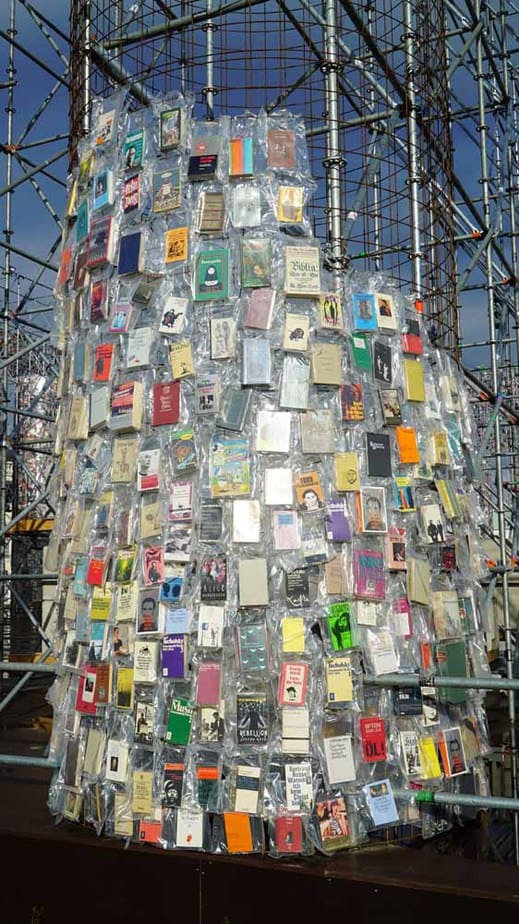 In Kassel, the titular Athenian connection is the centerpiece of the show.  For Documenta 14 Argentine artist Marta Minujin erected a life-sized replica of the Parthenon out of banned books. The structure feels at home among the classical buildings of Friedrichsplatz park and is visible from many of Documenta’s key venues. One hundred thousand books, seventy thousand titles from Fifty Shades of Grey to Animal Farm, were donated for the project. The goal of the work is to highlight Athens as “the first European capital of culture.” This is Documenta at its best, connecting the ideas of Greek democracy with 21th century culture. All the more poignant because the location was a sight of book burnings during the Third Reich. 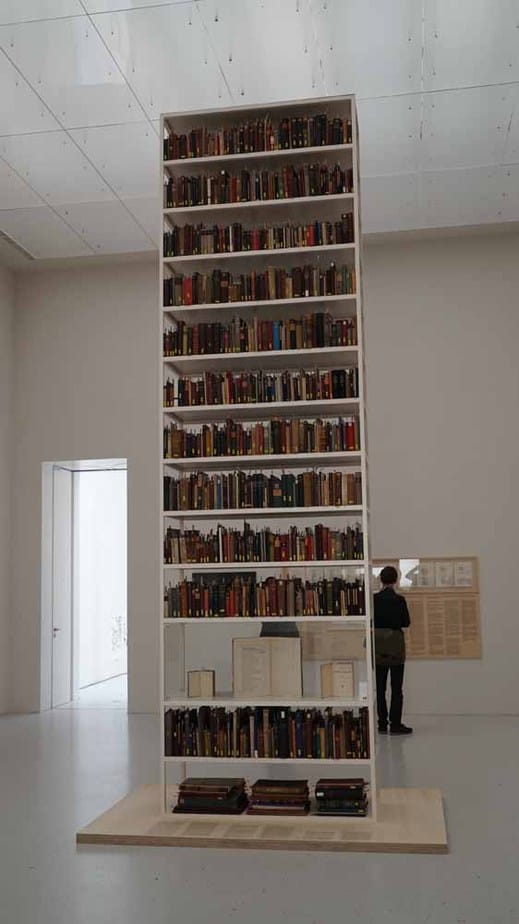 Established as a place to show art considered degenerate by the Nazis, Documenta has a long tradition of tackling the most painful subject in German history. For Documenta 14 the Neue Galerie, Kassel’s 19th century Museum, carries this mantle most visibly. Maria Eichhorn’s Unlawfully Acquired Books From Jewish Ownership (2017) leads the way. Placed in a large open room, the tower of stolen books is a reminder of Nazi crimes. The piece is part of the Berlin Central Library’s project to return volumes to their rightful owners. On the first floor Romanian artist Geta Brătescu’s mixed media Automatism produces violence: Project for an Action (1974) focuses on the automatization of death. The artist shows on video and recreates on canvas a man systematically wielding a knife cutting screens, eventually killing another man. The lines between this and Nazi themes are not hard to follow.

The Neue Galerie is striking for what it’s missing as well as for what it has. In 2013, Art News reported that Szymczyk campaigned to display work seized from the apartment of Cornelius Gurlitt. Over 1,500 pieces, acquired by his family of Nazi art dealers, were reclaimed in a police raid in 2012. The only problem is that the Kunstmuseum in Bern, which houses much of the collection, declined to participate in Documenta. Despite not getting the collection, Szymczyk stuck to his guns on the galerie’s theme. The Documenta website for the Neue Galerie says  “Through the prism of the tangled, thorny story of the Gurlitt estate” the venue will address historical memory. To fill the void left by the refusal, the Neue gallery is devoted to themes surrounding cultural theft, as seen with Maria Eichorn’s previously mentioned work.

The Neue Neue Galerie is similar in name to the Neue Galerie, but different in almost every other way. Formerly Kassel’s main post office and mail distribution center, The Neue Neue Galerie is a wide open industrial space perfect for art on a large scale. Theo Eshetu’s Atlas Fractured (2017) takes advantage of this. The work is a thirty five minute video projected on a massive color banner from the controversial Ethnologisches Museum in Berlin-Dahlem. According to the description, the purpose is to create “a new world order” by superimposing faces of modern figures over historical leaders of the geopolitical world. Daniel García Andújar The Disasters of War/Trojan Horse (2017) instalation also takes advantage of the space. Andújar says the work examines the role of war in the expropriation of cultural heritage. First the eye is caught by greek esque statuary depicting the myth of the Trojan horse. These statues however are not ancient and are designed to disintegrate in a matter of weeks. Along the walls work chronicles cultural shifts during the Spanish civil war. Andújar says war often asks one “to make a list of what is important” to society. 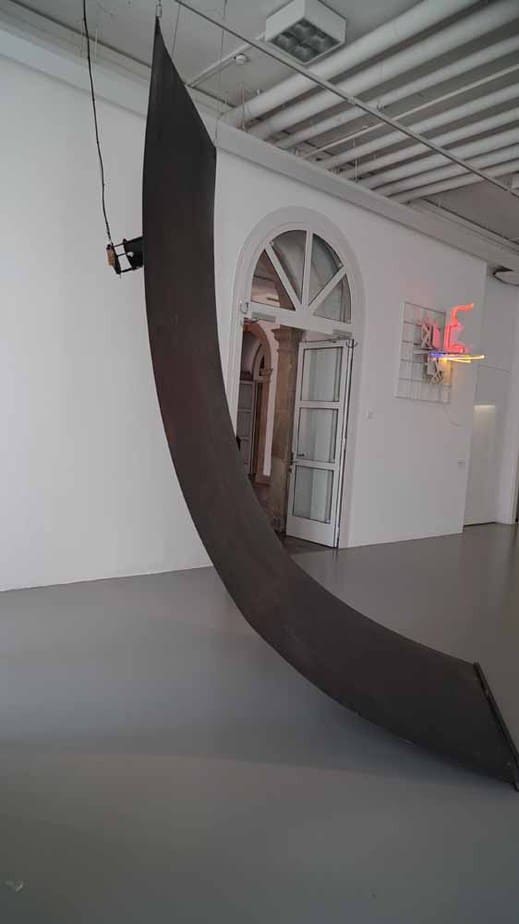 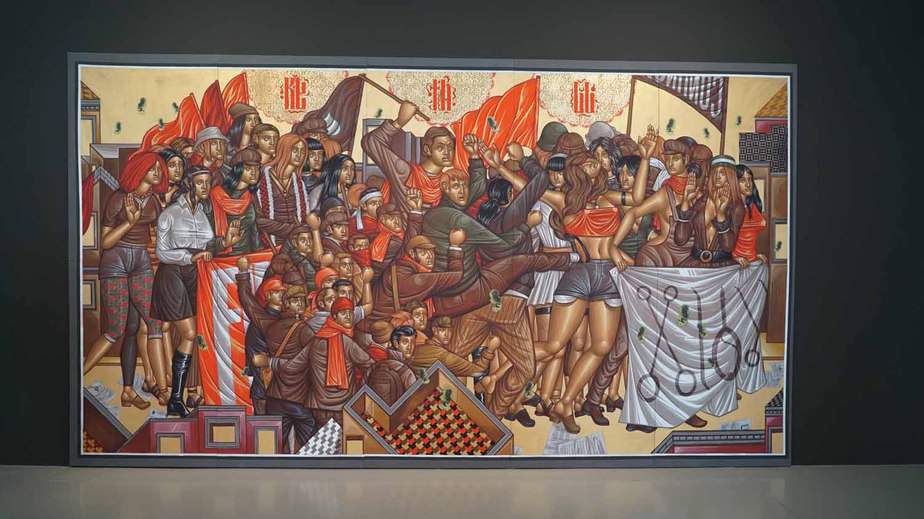 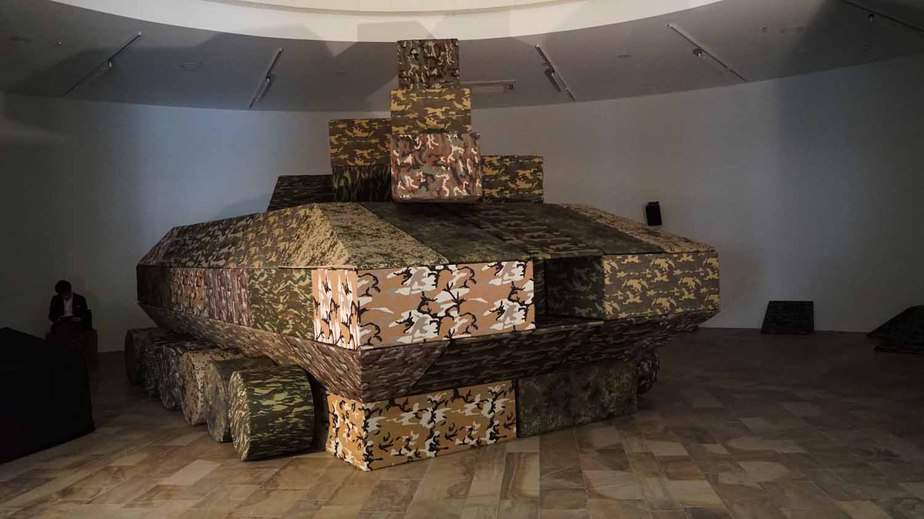 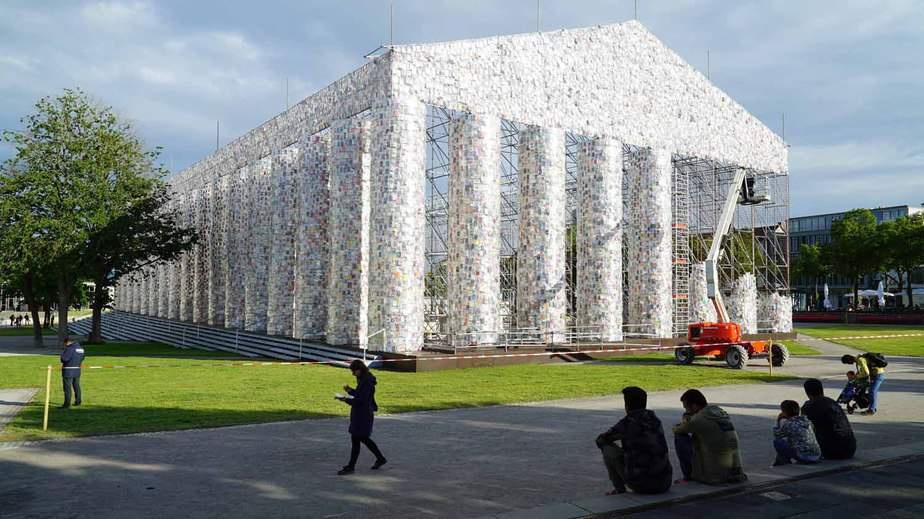 For the first time, the collection of  Greece’s National Museum of Contemporary Art (EMST) is presented in Germany at the Fridericianum Galerie. Placing the EMST at Fridericianum, the traditional heart of Documenta, shows the curatorial team’s commitment to their “Learning from Athens” theme. Literally startling visitors upon arrival, Taki’s Gong (1978) consists of an electromagnet slamming into a draped piece of metal every few seconds sounding a terribly loud bang. The Gong keeps anyone from become comfortable or complacent. Artist Stelios Faitakis channels Diego Rivera for his Acrylic on MDF Fortunately Absurdity is lost (But they have hope for much more) (2014). The work captures the vitality of public action in Greece. Andreas Angelidakis militaristic Polemos (2017), constructed in foam and Vinyl, provides camouflage seating to allow time to contemplate a recreated tank. 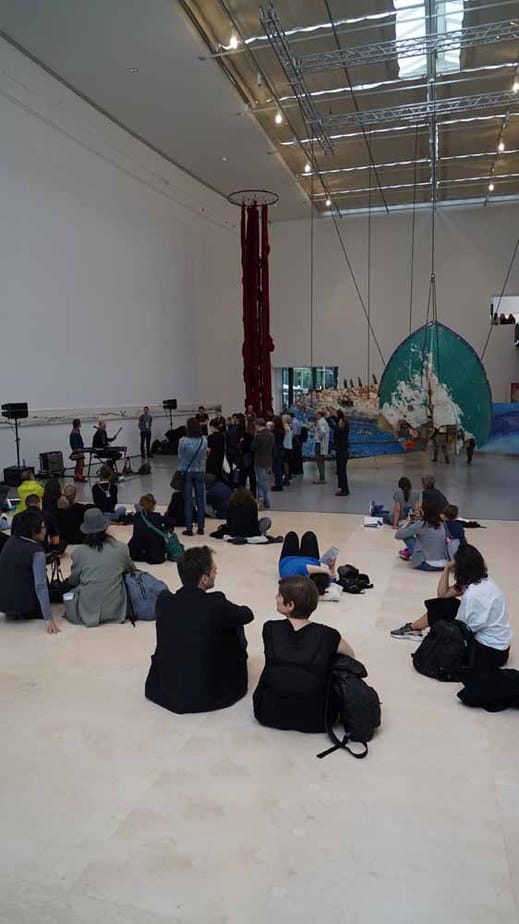 Things get significantly lighter at Documenta’s namesake halle. Constructed for Documenta 9 in 1992 the halle is designed to resemble a human lying on grass. Prophetically the 9th edition’s director compared the building to the Acropolis. Inside, bright colors and an airy space are striking. Live music is performed in the atrium where young, and not so young, people sit on the floor to watch. Stanley Whitney’s oil on linen work sets a more upbeat tone than could be found elsewhere in Kassel.

Documenta 14 is a gigantic exhibition, and it takes days to see everything. Because of the size it is difficult to speak categorically about the program as a whole, but I will give it a try. The curatorial team insists that this edition of Documenta is about conscious over capital. I believe in their earnestness, but there is more than a whiff of hypocrisy when the political grandstanding is sponsored by Volkswagen. This would all be more palatable if the tone was not so pessimistic. It is true that today’s world if full of horror, but is that all their is? Documenta 14 does not inspire one to take action, instead it drove this writer to the hotel bar to try and drown his sorrows.