Glass has become the perfect metaphor for the preservation of knowledge in an increasingly fragile world. Without collaboration, everything is lost. http://glasstress.org

The island of Murano is synonymous with the history of glass. First perfected in the Middle East – Syria, Egypt and Palestine – the art of glassmaking came to Venice along Marco Polo’s trade routes. It is believed that the master glass workers and furnaces were confined to the adjacent island of Murano, the oldest known furnace dating back to 800, due to the risk of fire. However, it also allowed the Venetian authorities to secretly guard its most vital industry; workers who left the island were sworn to secrecy, on penalty of death, and forbidden to work elsewhere. By the 15th century Venice controlled the glass market, its prized clear glass – cristallo – and mirrors being swiftly dispatched from its ports…  Yet it was precisely this isolation policy which led to its decline; by the 17th century, London had taken over as market leader. 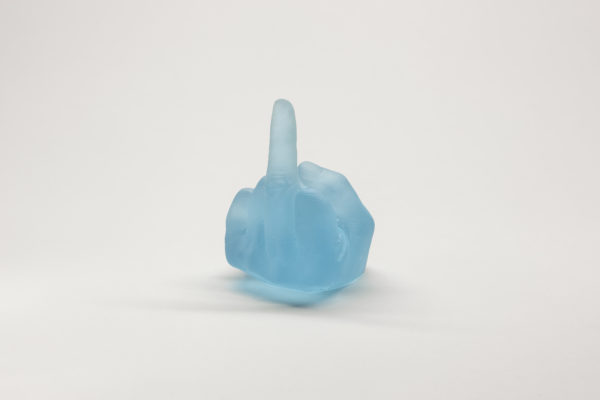 Centuries later, one Venetian named Adriano Berengo saw a way to reignite the dwindling glass trade on this tiny island. Certain that the preservation of knowledge requires collaboration, he set up Berengo Studios in 1989, and dedicated himself to forging meaningful relationships with leading figures in the art world. Leveraging Murano’s greatest asset – the master glass workers – he invited established and rising stars of the art world –  Ai Wei Wei, Fiona Banner, Tony Cragg, Jaume Plensa, Thomas Schutte, Karen Lamote, Laure Prouvost –  to come and discover what it means to handle this extraordinary material – a liquid that freezes time and underpins our very civilisation.        Materials matter, especially the ones we take for granted and require highly skilled artisans, like glass. Created from sand using fire, water and air, glass is a uniquely luminous and transparent material – because it is actually a frozen liquid known as an “amorphous solid.” Becoming molten under extreme temperatures of more than 1700°C, as it cools it remains transparent, because the molecules do not have time to rearrange themselves again. Glass has shaped the way we see the world – lenses, microscopes, telescopes, and windows – and the way we experience and try to preserve things through time – bottles, jars, vitrines, watches and a glass of pinot noir.

So what makes this material so relevant again today in the world of contemporary art? From Laure Provost’s liquid tentacled universe Deep See Blue Surrounding You in the French Pavilion, to Koen Vanmechelen’s fantastic beasts atop La Biomista and five volumes of Human Rights, for the first Pavilion of Human Rights, glass is everywhere at 58th Biennale di Venezia. Like ceramic and textiles, glass is having a moment. “Glass is a riddle,” says Vanmechelen one of the two artist curators of the 6th edition of GLASSTRESS  “it is invisible and only shows itself when it breaks.”

One of the most successful collateral exhibitions during La Biennale di Venezia, showcasing the collaboration between contemporary artists and designers with Berengo Studio’s Muranese maestri, it is a must see. Now in its tenth year, GLASSTRESS has moved to an evocative new exhibition space in Murano, an abandoned glass furnace, only twenty minutes by boat from San Marco-San Zaccaria. Incorporating works from returning artists alongside first time participants like Prune Nourry, Jose Parla and Rose Wylie, guest curator Vik Muniz asked new artists to explore “how glass redefines our perception of space.”

It is spectacular. The blood red glass in Javier Pérez Carroña’s work, replete with black ravens grabbing beaded strings like entrails, shatters the senses. Jaume Plensa’s translucent upturned hands and quiet, resting, faces are beautifully  unnerving, ghostly; the obscenity is tempered in Ai Wei Wei’s chromatically ordered row of middle fingers by the material’s fragility. Glass seems to elevate everything from the ordinary to the sublime, and brings our mind into focus as to the true essence of things. It magnifies what you are looking at, but only shows itself fully when it slips out of your hands. It is like water.

Perhaps these qualities make glass the perfect metaphor for what Ralph Rugoff, director of the Hayward Gallery and curator of the 58th Biennale, calls “interesting times.” Rugoff has divided his exhibition (May You Live in Interesting Times) into two parts with 63 artists showing in both the central pavilion of the Giardini and the Arsenale; showing two sides of the same story, from different perspectives. Throughout, glass is omnipresent, beginning with the thousands of smartphone lenses attached to noodling arms, probing their way through the space. Looking at, looking in and looking out… what did we see?

Time based media, shown in sealed intimate environments, was strong this year, most notably Alex Da Corte’s Rubber Pencil Devil, Kahlil Joseph’s BLKNWS, and Arthur Jafa’s Love is the Message, The Message is Death, which won the Golden Lion. We are jolted into seeing the world as it is experienced by someone else. But this was nothing compared to the actual vitrines and glass screens used to gut wrenching effect by artistic duo Yuan Sun and Yu Peng – I have not experienced coming round a corner like that in a museum, ever. It was the stuff of nightmares and no-one could turn away. Glass – our material of choice to protect and preserve – was used not for the artwork’s safety, but ours. “We have to develop a more direct way to connect with both our spiritual and material worlds,” said Peng. We are observers, screened from a deadly robot repeatedly scooping up an endless pool of blood.

At the other extreme is the hauntingly beautiful work of Christine and Margaret Wertheim’s Crochet Coral Reef  made out of electro-luminescent wire illuminated in glass vitrines, like a requiem for the lost dream of the Great Barrier Reef – pronounced dead last year. Adjacent is a 26 metre long, jagged line of marble and glass, Veins Aligned, that forms the central feature of the Arsenal show, by special mention artist Otobong Nkanga. Made from Murano glass, this cloudy, murky crack made from desert sand speaks volumes about our continued plundering of natural resources. This is the line we have crossed, and it is a theme repeated throughout, from Anika Yi’s Biologizing Machine (tentacular trouble), incandescent yellow cocoons hanging from the ceiling, dripping dark liquid into craters below, to the disembodied glass sculptures by Andra Ursula from her “tragicomic contemplation of life.”

Many of these works mirrored and echoed what I had seen that morning at the Campiello Della Pescheria, on the island of Murano. Prune Nourry’s vascular system work, crystallising the life-giving rivers and streams we carry within, and Valeska Soares Acqua Alta, comprised of a series of containers which simultaneously highlight the unmitigated flood of single use plastic into the world’s oceans, and rising sea levels, surging on coastal cities across the globe.

Between all this what did I see? I saw hope, a genuine glimmer. It was on the water’s surface as I returned from the island of Murano that morning, thinking about Koen Vanmechelens words “….the world of the unknown and unseen becomes visible and tangible through beautiful accidents in time.”

The extraordinary thing about GLASSTRESS is not only the wealth of magnificent work produced, but that one man who saw a sinking ship, did something about it, and saved an important part of the island’s heritage in the process. In only ten years Berengo Studios and this biannual showcase have become a go to for an art form that may well have disappeared.

One hopes we might have the same effect, collectively, when it comes to saving the environment… As Rugoff says, “I think the best thing you can learn is how to learn. This is what artists can teach everyone.”

For more information about other initiatives in Venice actively trying to tackle issues of climate change, over tourism and loss of tradition, go to:https://weareherevenice.org/actions/water-levels/

For in an depth historical guide to Venice:

•Everyday (excluding Wednesdays) from 10 am to 6 pm