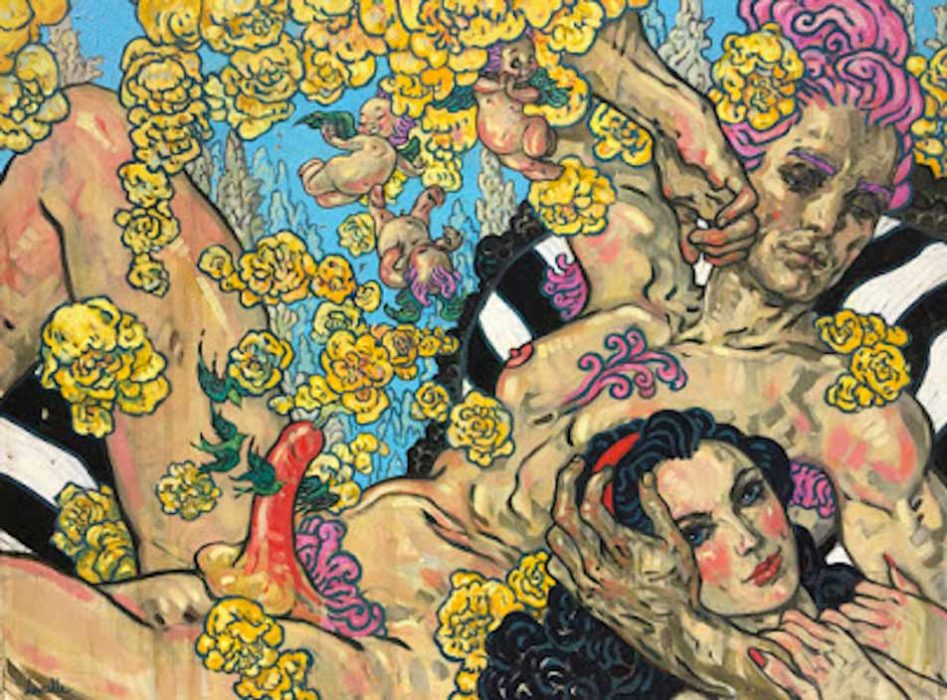 “Things we perceive to be ideals are often built upon faulty, weak and diseased foundations set forward and reinforced by society and pop culture. We are made
to fall in love with an arbitrary set of stereotypes, physical ideals or cultural goals that are twisted and often deeply damaging to us……what happens once we cross to the other side of social constructs, the fairytales that we are raised with……what comes after delusions of “love?” Feminine power and sexuality find new ground, as does an urgency to assert the female gaze. The female gaze must find a stronger manifestation; it is too often expressed as a reinterpretation of the male gaze.” —Rebecca Leveille

“The End Of Love“—opening May 1st at The Untitled Space in Tribeca, New York, explores themes of sensuality, sexuality, the female gaze, media, imagery and social phenomena by American painter, Rebecca Leveille. At first glance, one can easily see the ‘Love’. It’s everywhere and it’s hot. Steamy, almost X-Rated hot. But after talking to the artist in her Boston studio, after experiencing her art through our male gaze which contrasted to that of hers, we left feeling entirely different. We left feeling humbled. Here was someone not simply with a masterly skill set, but an artist with a genuine message, a woman who was as honest and in-your-face straightforward, as she was powerful. The adage Never judge a man until you’ve walked in his shoes flashed through this writer’s mind. As did the #MeToo movement. What college gallery space would exhibit such provocative works today? Especially if they were done by a man. But these paintings were done by a woman, an artist who in her adolescent years—as a child still— was a victim of sexual assault. And therein lies the truth behind these works. Herein lies the fidelity of her art: because of her experiences, her personal insight, wisdom and above all else, her ability to communicate, Rebecca has the power, and the right message, to change negative stereotypes and derogatory social constructs proliferating in society today. Rebecca Leveille’s female gaze and voice bring a beautiful and strong light to the world. We need more of this. Not less. And every university and college campus coveting their safe-spaces should heed her work —her story. And to remember: Never judge a woman until you lived in her mind. 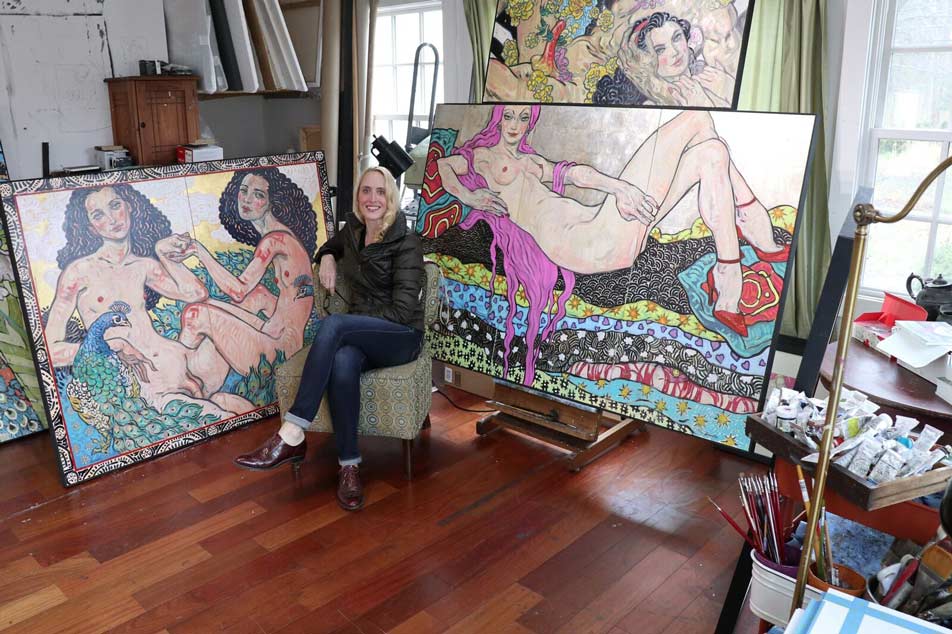 Rebecca Leveille in her Boston studio.

Quiet Lunch (QL): Please tell us what hides behind The Lovers.

Rebecca Leveille (RL): It’s as much about a playful commentary on artworld critical culture, as it is about sex. I sketch a lot when I’m out in the world and I did this sketch (had the idea) while listening to an ArtCritical.com Review panel discussion last year at the Brooklyn Library.

QL: As a former, and successful illustrator, do you find it difficult leaving behind the narrative?

RL: As a commercial illustrator, one works with narrative in ‘service to’ an overarching text of secondary content. That’s the job. As a painter, I employ a sense of narrative to create and express an internal dialogue I have with culture and the influence of culture. These two things are very different ways of working with different outcomes. Like current artists John Currin, Robin Francis Williams, Lisa Yuskavage and others who also employ a sense of narrative, and speak in a langue of figure and pictures, I aim to create and refer to an internal nonliteral narrative and mythology, rather than direct or literal narrative in service to a secondary source. 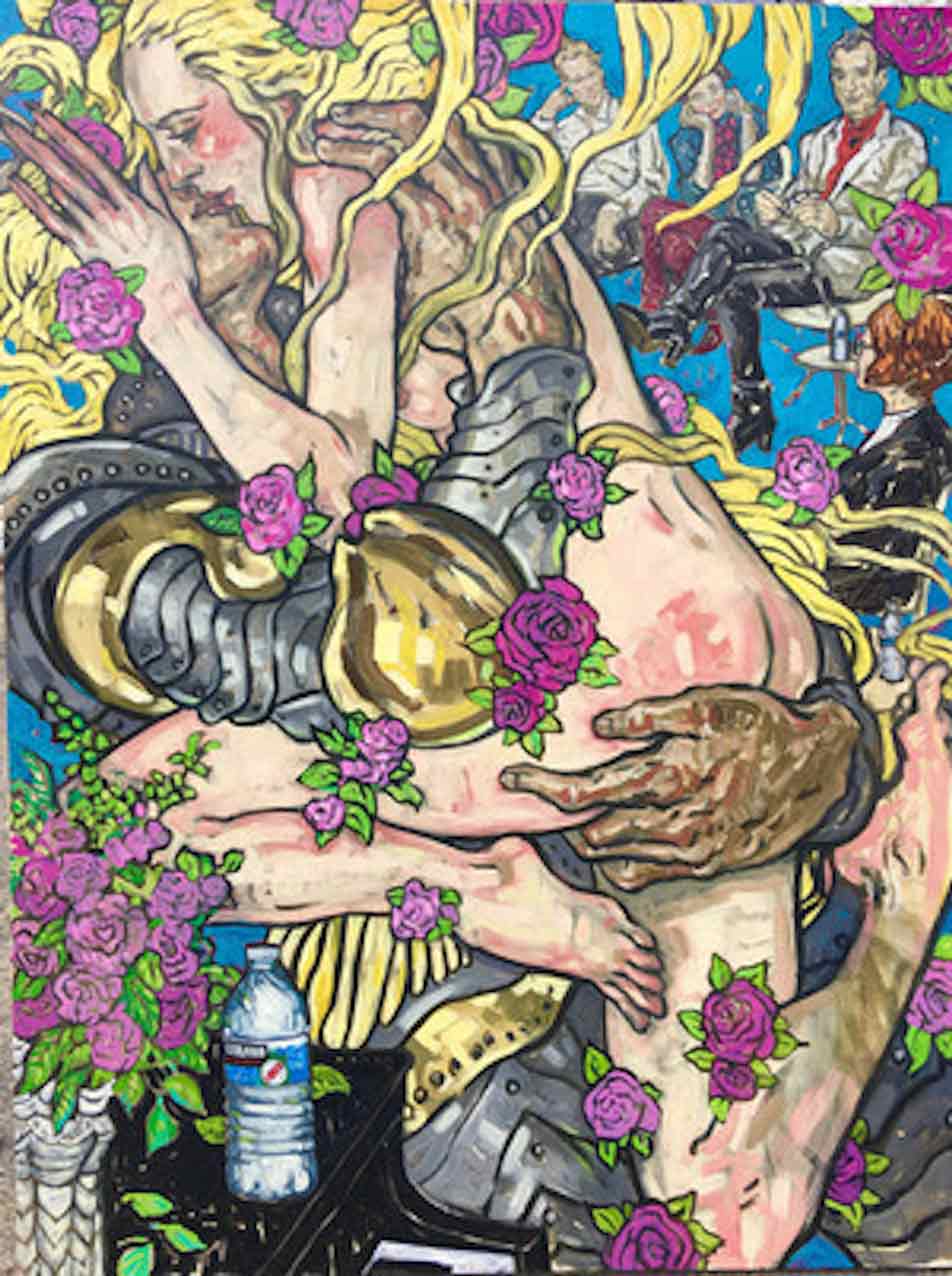 The Lovers, by Rebecca Reveille

QL: Eros must be your God. Who or what else inspires you?

RL: The female gaze is my god. Eros and other reference points from current culture history, and mythology are my TOOLS. As an artist, there is little that does not go into the pool of inspiration that is the source of the work!

QL: Do you think your work will resonate with the modern woman? Do women still wish to be swept up off their feet as in The Lovers? Do they hunger love as what appears in The End of Love

RL: I consider myself a modern woman, so I do hope my perspective driven art will resonate with others. My images of women have little to do with the passive princess concept. I’m not sure anyone exactly wants to be swept off their feet in the sense that we truly lose control of ourselves. When I think back to the most deeply passionate encounters of my life they involve both a sense of great personal power and complete vulnerability all in a single moment. If you take one of those things out of the equation, then you have a memory of encounters that are not so good.Its this complexity that I aim to bring across in the work. My work is visceral sensual and I am interested in turning the table on the 1000 years of the female form from the male gaze by the method of sexualized male nudes within the dialogue of the work. I also care deeply about gender fluidity and sensuality within the culture and I deal with that in the work as well. I want to explore how feminist art can be more than vagina images- more than women painting women; there is nothing wrong with that of course, but I think there is an untapped collection of ideas that relate to the female gaze on a sexualized form. That’s what The End of Love painting is truly all about. 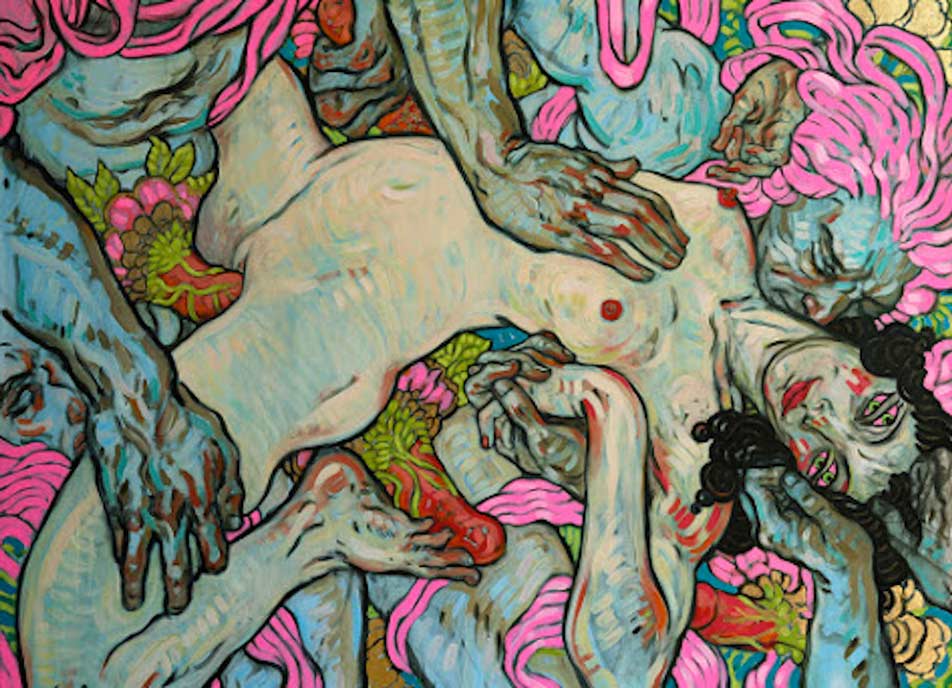 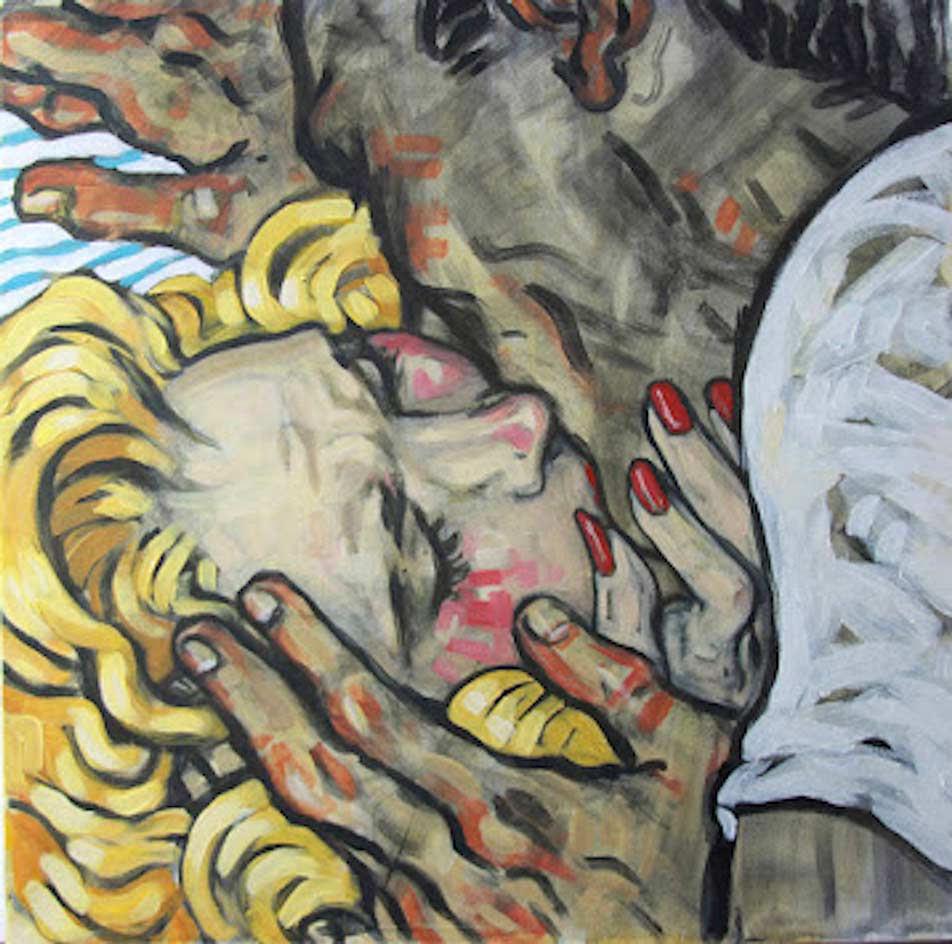 QL: What’s your take on the #Me Too movement?

RL: I think it is the most significant movement of this generation. I, as most of the women I know, was the victim of sexual assault as a teen and was subject to years of gross and violating behavior in various lesser ways (my last show CRUSH had paintings dealing directly with my personal history of sexual violence.). We all had learned to digest this as part of what had to be put up with, but its changing because of #metoo. I do think we need to incorporate due process in the charges going forward but its a massive wake up call for the behavior and I hope it will bring lasting change.

QL: Wow.Thank you for that.