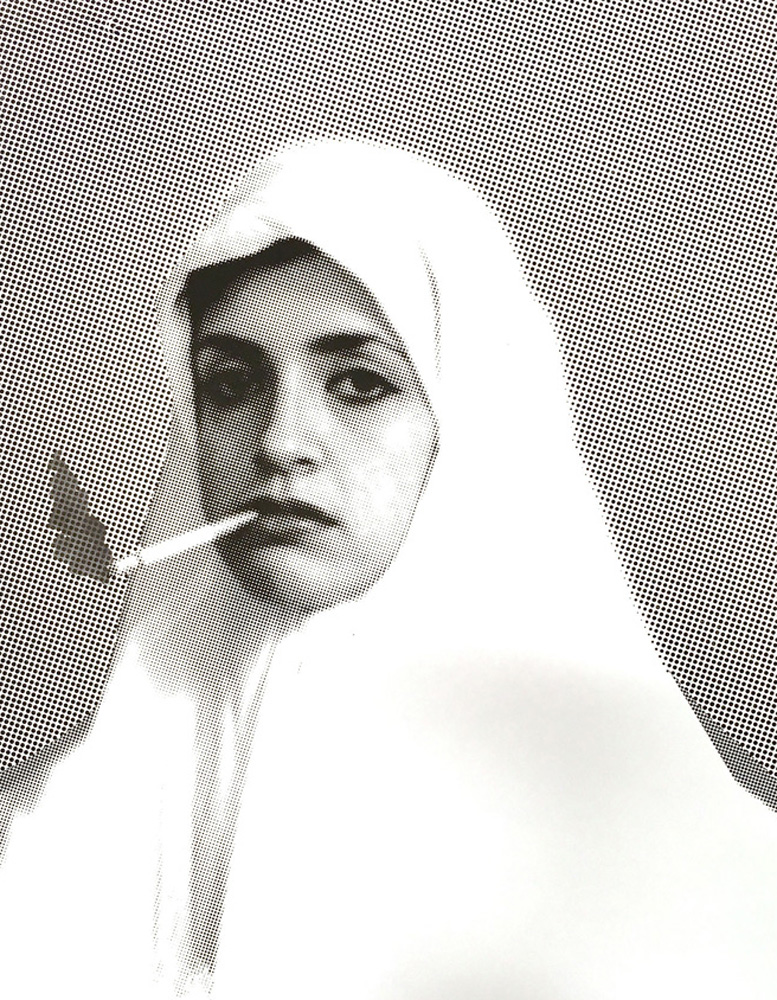 When viewing the TedX talk featuring the award-winning avant-garde artist Sarah Maple, one is instantly transfixed by her commanding, statuesque presence and attention-grabbing syncopations in her speech pattern. Born to a Muslim mother from Kenya and a British father, Maple attended a Catholic school in her youth, making her the personification of someone constantly investigating questions of identity and its true meaning. Thoughtful, direct, and unabashedly apologetic, her words flow with the absolute precision of someone who has undoubtedly studied and lived a life in search of self, place, acceptance, and purpose. And as such, she takes her time to be sure that you the listener are very much keeping up with, and understanding, the true meaning behind every word she utters.

Having gained notoriety and acclaim for her bold, provocative, mischievous, and sometimes in-your-face catalog of artworks–spanning painting, photography, sculpture, collage, installation, and performance art–Maple seems to be that rare kind of artist who will go to any lengths to ensure the message she brings awakens the viewer, or in fact, the listener. Yet her works also spur the viewer on into some kind of action; to question, to investigate, and to seek answers. This is whole-heartedly evident in the TedX; but even more so alive in her first ever US exhibition, Thoughts And Prayers, which has been curated by yet another powerhouse and feminist advocate in the art world, Indira Cesarine. Currently on view at The Untitled Space gallery in Tribeca until February 3rd, Maple’s works are an exploration of “The truth” in all forms, as well as an ironic and sometimes humorous play of what it is to be a feminist; which in ones view is the ardent and unabashed demand – no, requirement – for equality in all aspects of life and for all (whether at work, of race, gender, and ability). 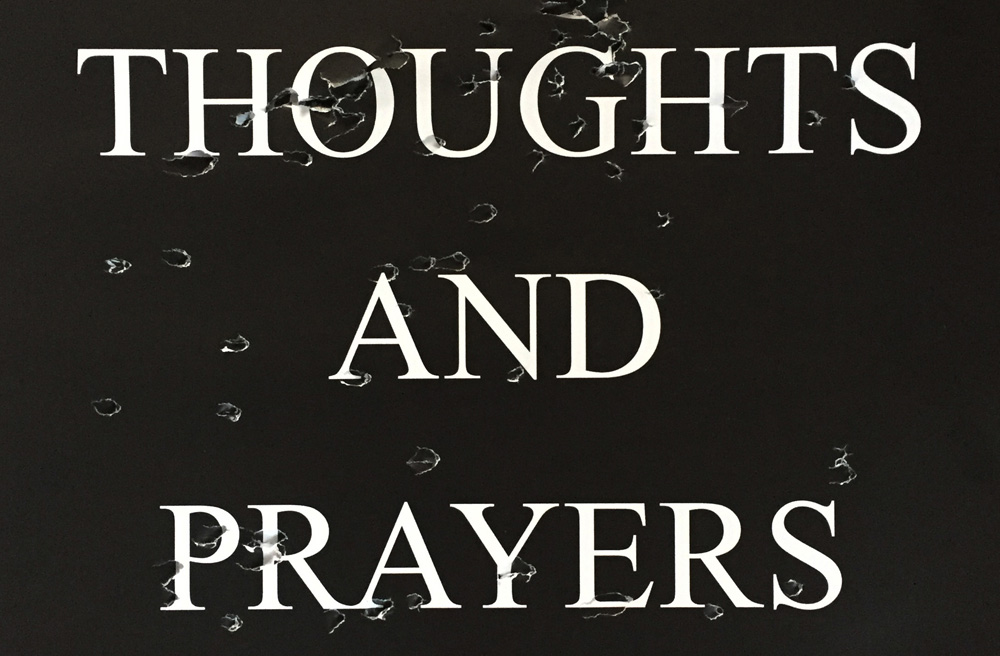 The artists puissant and perhaps most potent work in the exhibition, “Thoughts And Prayers,” which takes the same title as the show itself, is a mixed media collage depicting those very words, with holes from actual gunshots blown through every crevice of the piece. This, to one, is a no-holes-barred (pardon the pun) and tongue-and-cheek question, or challenge, to the all those who hold powerful position’s to really decipher the meaning, or lack of -the hollowness- within that very phrase when uttered at the funeral or commemoration of those whose lives have been cut short by gun violence, especially here in the United States. Even more so, it seems to be a demand from the artist to said power player’s to in fact DO SOMETHING about gun laws to prevent further bloodshed and loss of lives; not simply offer up thoughts and prayers when lives, which could have been saved, have been lost.

Quiet Lunch spoke with the artist about Thoughts And Prayers, as well as her continuing work as a commentary “Artist Of The People.”

At what point did you realize you wanted to become artist, and why?

I’m not sure if there was a lightbulb moment exactly but initially I just knew I could draw and paint and was interested in how far I could take that. It was only later when I started studying art that I realized the power it can have and I discovered a real love of art. I realized then I could use it to say something; that’s when it took off for me. 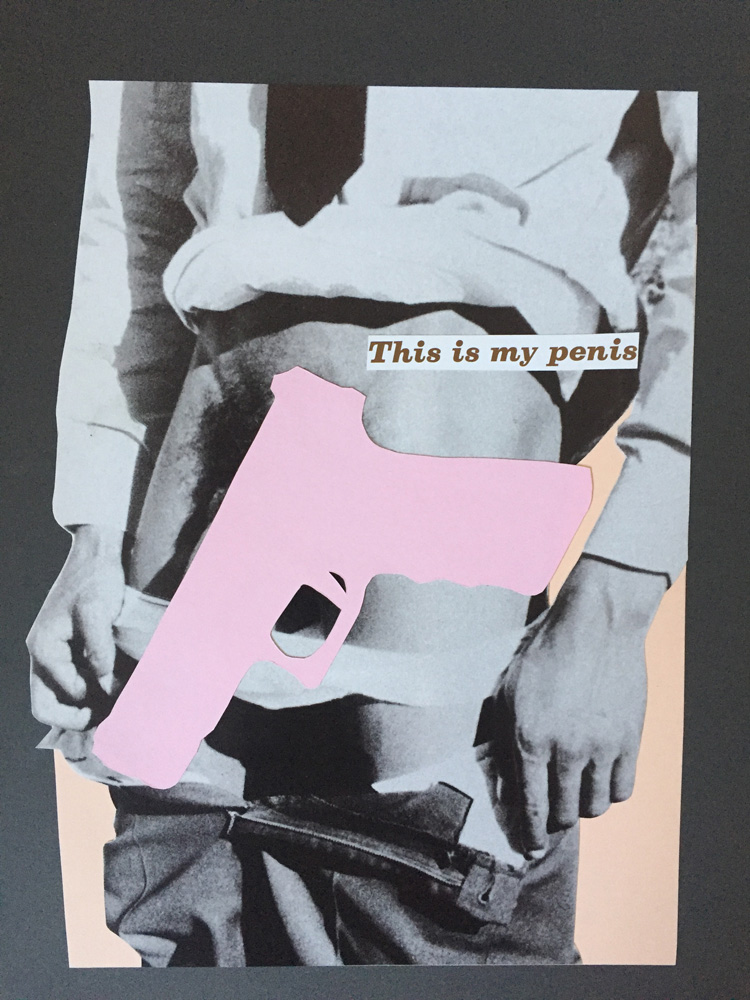 “This is My Penis” Artwork by Sarah Maple, “THOUGHTS AND PRAYERS” Solo Exhibition, The Untitled Space, January 2019

Who has been a major influence to you as an artist?

I think select women artists have really inspired me like Frida Kahlo and Barbara Kruger. When I was growing up it was all about the YBAs like Sarah Lucas, Gillian Wearing and Tracey Emin. I think they had a major impact on me as I just wanted to be like them!

You were raised Muslim, but attended a catholic school. Referencing you work in the arts, would would you say was perhaps the biggest conflict of identity or regarding religion that you may have faced?

I had a mixed background; my mother is a Muslim and my Dad was Christian raised, but more of an atheist! So I grew up with these two very different view points but being raised as a Muslim. I am also fairly white and was raised in a very white town in the south of England, so I think that conflict was in me from a young age. You are made aware you are different from other people, from both communities. I felt very attached to Muslim culture but also felt on the outside of it due to being mixed. So there came a point when I was an adult that I felt the need to express that; it was a way of trying to make sense of it. I think many Muslims living in western countries feel quite similarly. I did this visually by juxtaposing traditional Islamic imagery with pop culture references to highlight this contrast and somehow convey the conflict.

You work span’s just about all discipline’s of visual art. Why do you find it so important to focus across all platforms as opposed to say, just sticking with performance art or painting, etc?

Well for me it’s all about the idea behind it and how I can communicate that in the most successful way to the viewer. So with each idea I think of the best media to convey that idea. This is why it is constantly evolving. I do like this as I always feel like I’m being challenged with my work and people don’t know what I’m going to do next. 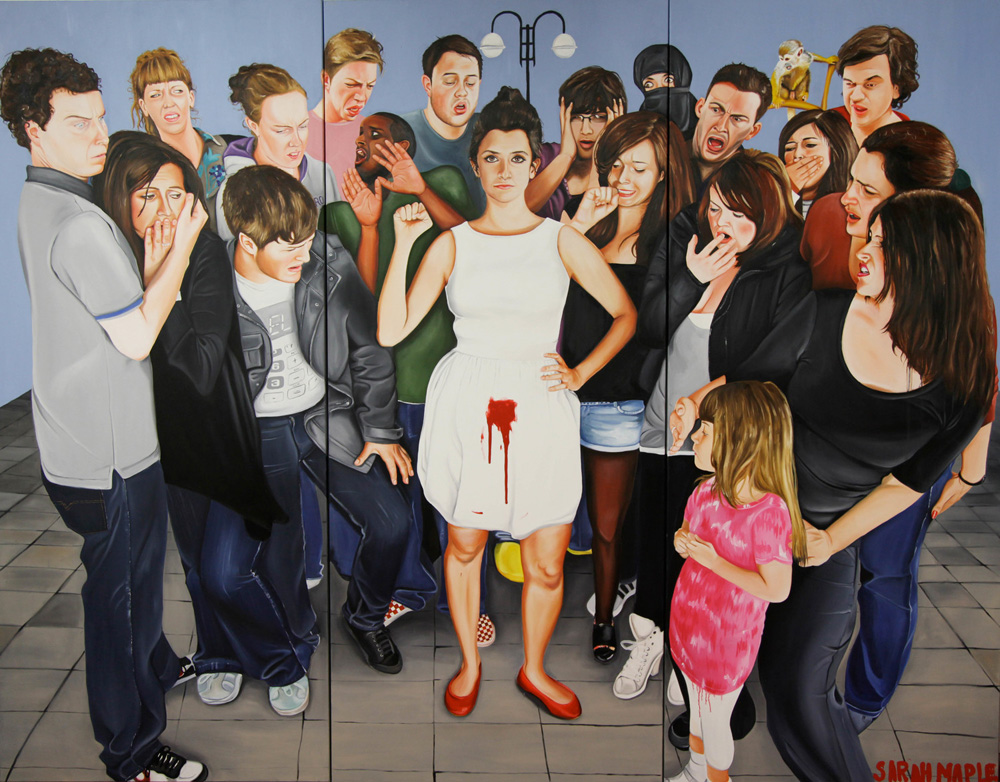 You have received several awards for your work. Which would you say you are the most proudest of, and why?

Last year I received a commission from Sky Arts to make work about identity in post Brexit Britain. I made this work about how the British Empire has played a hand in the cultural diversity of modern Britain. My background being a prime example (it’s a long story haha!). I have made a large portrait including my parents which I am very proud of and will exhibit next month at the Baltic centre for contemporary art.

Your current exhibition, Thought And Prayers, which is also the title of one of your featured works is on at the Untitled Space. What is the meaning behind this work, and why is this message resonant particularly today?

This piece ‘Thoughts And Prayers’ is a performance video and text piece. The work came out of a moment of pure frustration after yet another shooting in the States last year. When someone in a position of power comes out and says their ‘Thoughts And Prayers’ are with victims and families, it just sounds so hollow and insincere when nothing is done and they are well aware nothing will be done. But you see this in different ways all over the world. Then you think about the demonizing of immigrants as ‘murderers and rapists’ by Trump….playing on the fear of the ‘other’ and what that’s done in recent years is so scary. 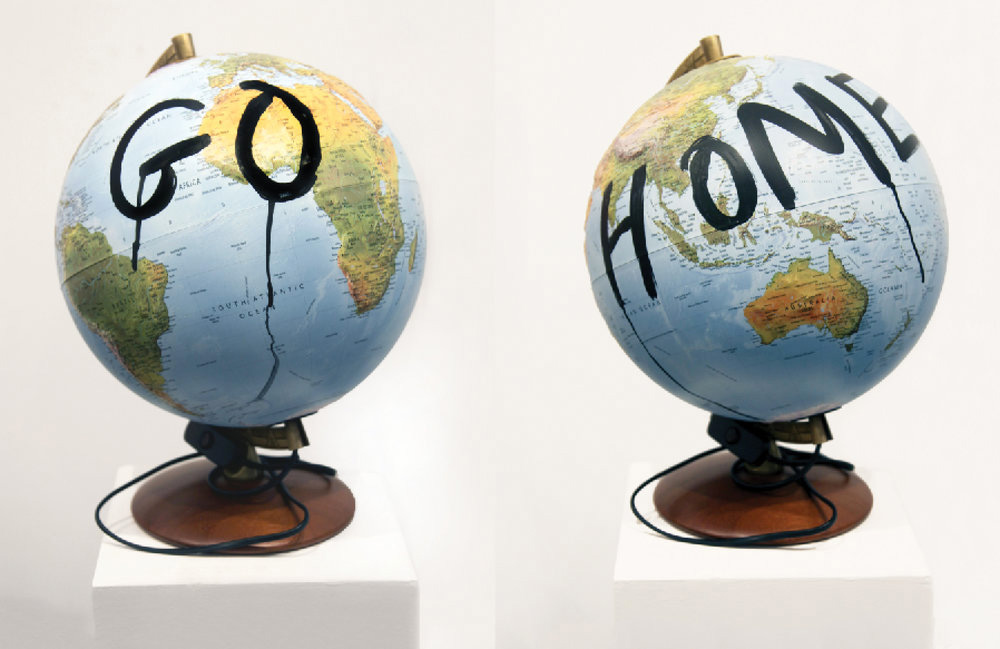 If you were to be anywhere in the world at this very moment, where would that be and why?

At home! Shit is about to go down with Brexit, I need to see it through on my home turf!

I think it was when I was at art school, when I started looking at my cultural background. I think my sense of identity will always influence my work, even if indirectly. People always ask if I am ‘done’ making work about Islam, but I can never be ‘done’ with it, it’s who I am and always in the background whatever I am doing. 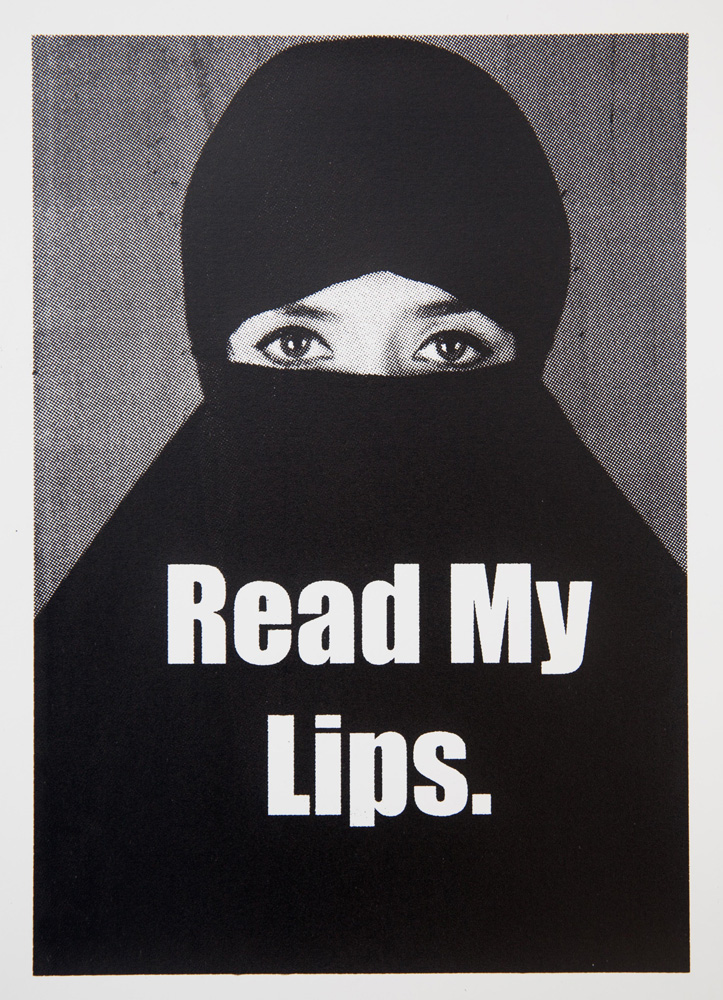 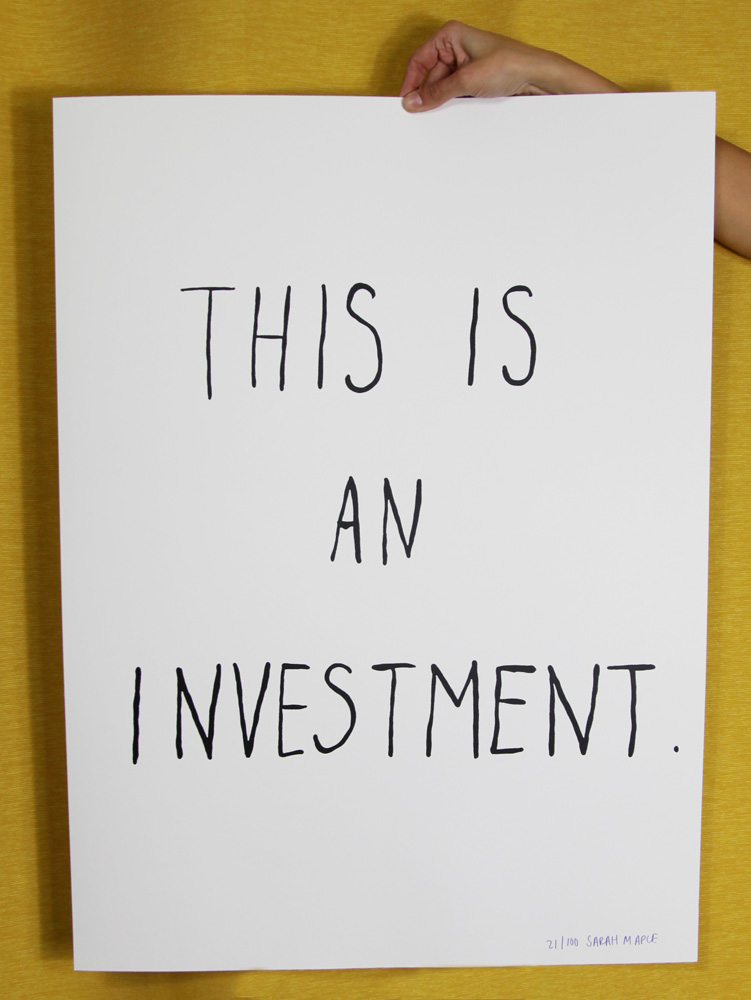 “This is An Investment” Artwork by Sarah Maple, “THOUGHTS AND PRAYERS” Solo Exhibition, The Untitled Space, January 2019

How has the preparation and collaborative experience been for this exhibition with Untitled owner and curator, Indira Cesarine?

It’s been such a great experience, a lot of hard work as we work so far away from each other but it’s been so worth it. It was really interesting talking with her about what particular themes would resonate with an American viewer. Indira came up with some great ideas how to display some of the pieces which has added hugely to the work. She also convinced me to bring my ‘Menstruate with Pride’ painting over which I am so pleased I did.

Are there any subject matters you have yet to cover in your work, however is especially close to
your heart at present?

My Father passed away last year, quite suddenly. I am sure that will come up in a Tracey Emin style TMI situation in the future! 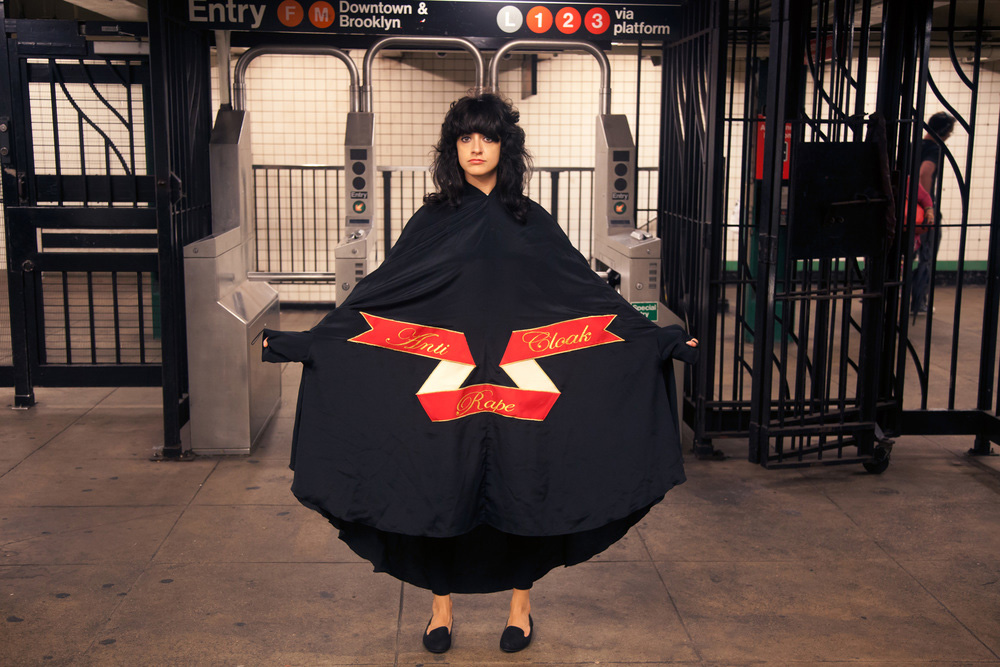 What would you like people to come away with upon viewing or experiencing your work live?

Much of my work is seen online and instagram. My work can be quite accessible for Instagram culture but it’s hard to get everything across on that platform and I think the power of the works are so much better in real life. I think people can be touched by it via a screen but I do hope it’s more intense in real life.

Anything else you want to add?