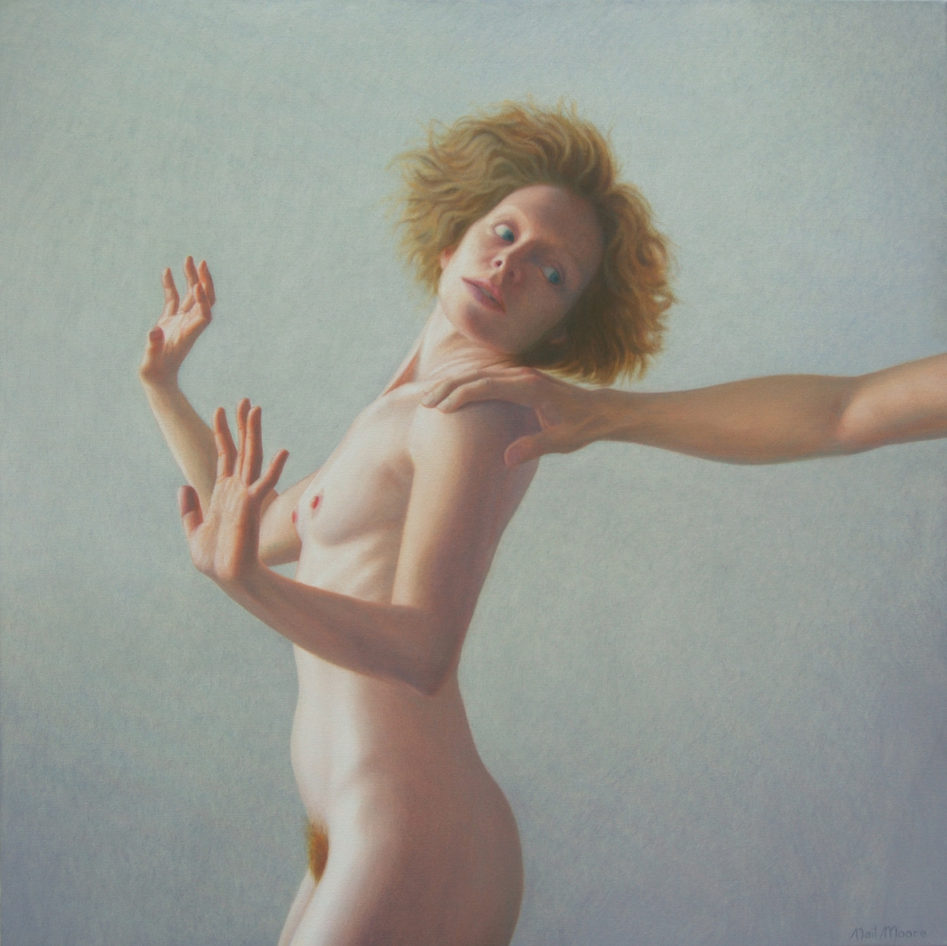 Just when you think you have Neil Moore figured out, he somehow finds a way to wriggle out of that straitjacket of a label that you felt sure enough to put him in. Moore’s work seems obvious but not as obvious as one may think. Themes that present themselves as apparent are often not. Actually, they often don’t mean anything at all. 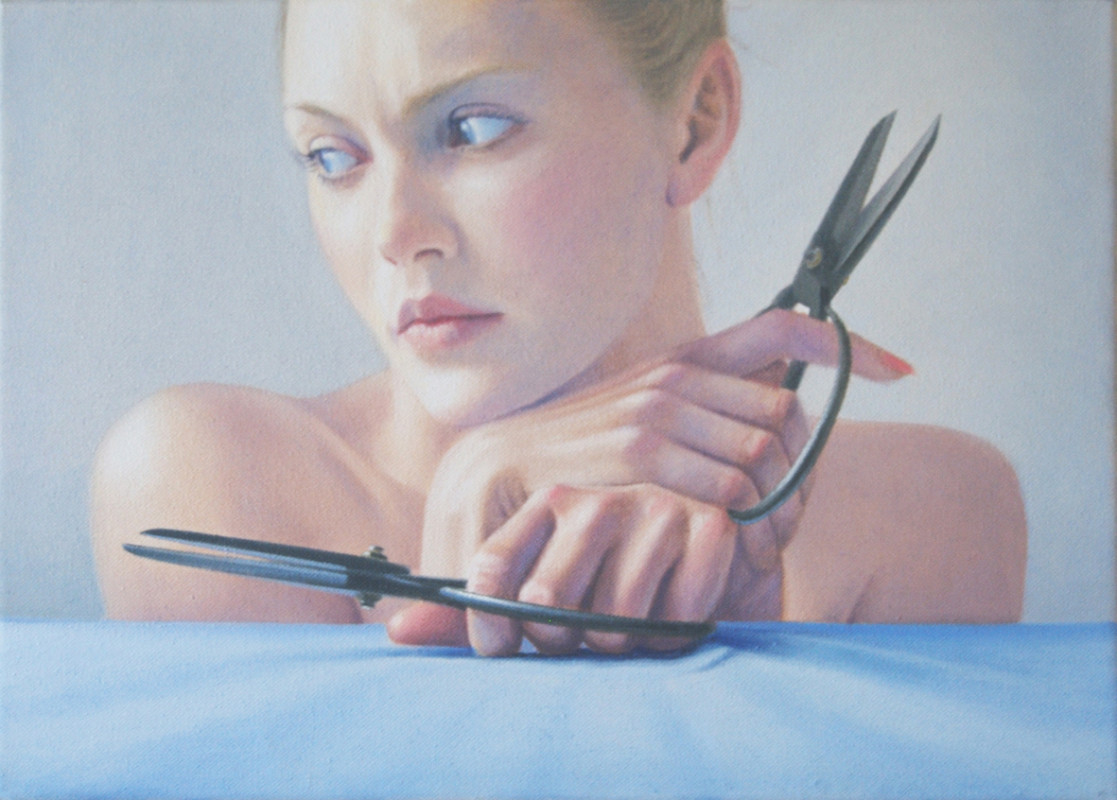 An artist at heart, Moore grew up in a pseudo pragmatic household that was imbued with the spirit of science. When it was time for Moore to choose a career lane, he naturally went the scientific route; choosing psychology and social anthropology as his academic interests. But eventually he changed his mind and decided to rebel against his conditioning.

“I decided to turn my back on what was expected of me.”

“Psychology, art… It was a natural transition,” explained Moore. Or so he thought. Once excepted to art school, he got distracted and began to squander his opportunity. “I became more concerned with living the life of an artist. I was hanging out and whatnot. I only took it seriously once they threatened to kick me out,” admits Moore with a sly chuckle. 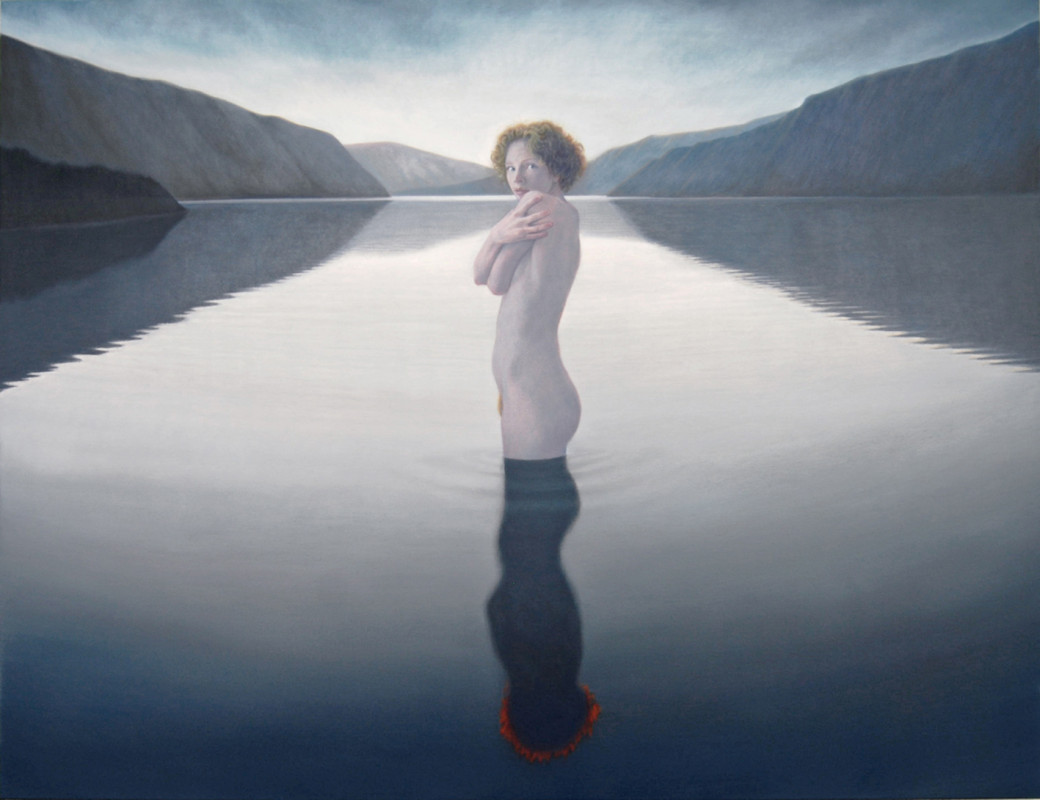 Once Moore began to take his studies seriously, he discovered the pure joy of learning technique. Through this joy he began to pour his effort and emotions into his work. But of course the story doesn’t end there. 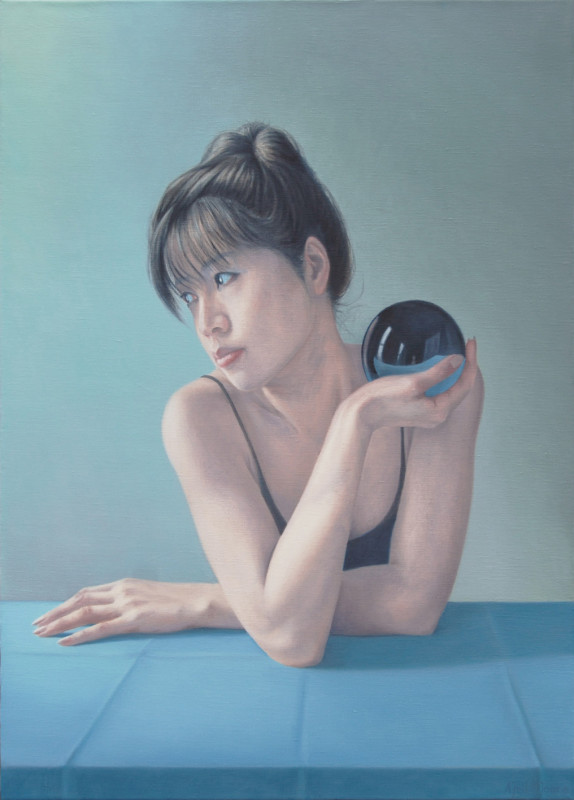 Over time, Moore developed a dramatic style. A dramatic style with an aesthetic that speaks volumes—although it isn’t always easy to determine exactly what that aesthetic is saying. Conceptually, Moore can be a bit elusive. Just when you think he definitely means something, he doesn’t; and just when you think he doesn’t mean something, he does. He isn’t concerned with being concise. Not to say that Moore is wishy-washy or without purpose—he’s far from it.

“[My paintings] are all metaphorical. I’m just trying to express what I feel. I just do things I like. I don’t analyze them. They are quite ambiguous. They often say things that I may not mean.”

While he does exude some purpose, he skillfully avoids overthinking that purpose. In fact, it would be more apt to say that Moore creates from feeling, not purpose. 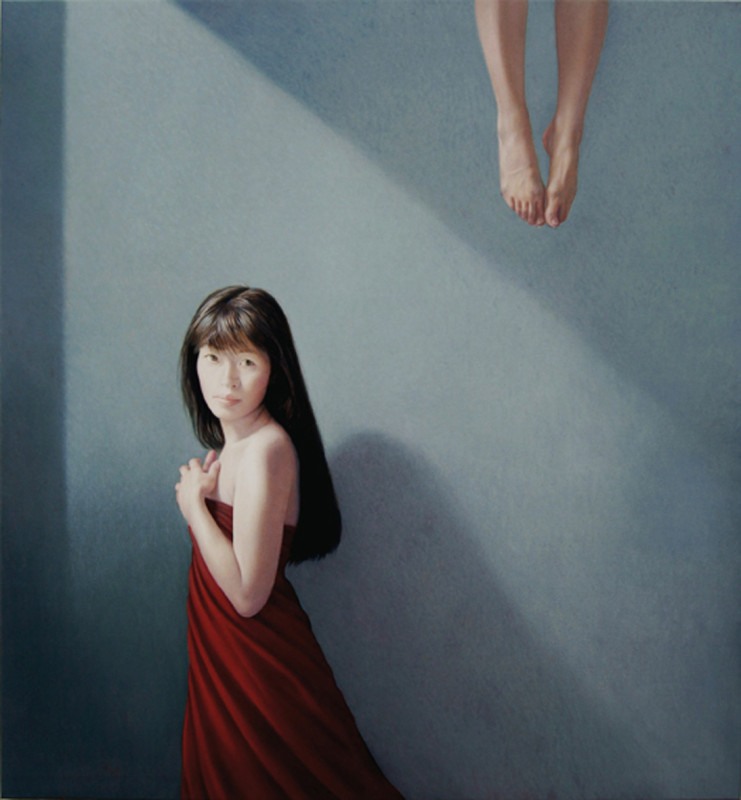 Feelings aside, Moore is very aware of the proverbial shell game that is taking place—the audience thinking they know where to find the red ball. In a way, he relishes the confusion. Not out of pretentiousness but out of a unique understanding of what it means to create something and present that creation for public consumption.

“Painting is an illusion. There is a deceit that goes into drawing and painting. Maybe a prerequisite for being an artist may just be being deceitful. [Laughs] Getting people to suspend their disbelief—it’s just like going to a theater or a film. You just have to forget and enjoy the ride.”

Despite his playful awareness, there is always a sentient quality to Moore’s work. He addresses love, fear, religion, parenthood… suicide. Yet somehow Moore finds a way to convey these powerful messages in a manner that is completely open to subjectivity. He has no qualms with the audience finding their own definitions because Moore is too busy discovering his own. And when he does find those definitions, he never forces it, he just lets them be. 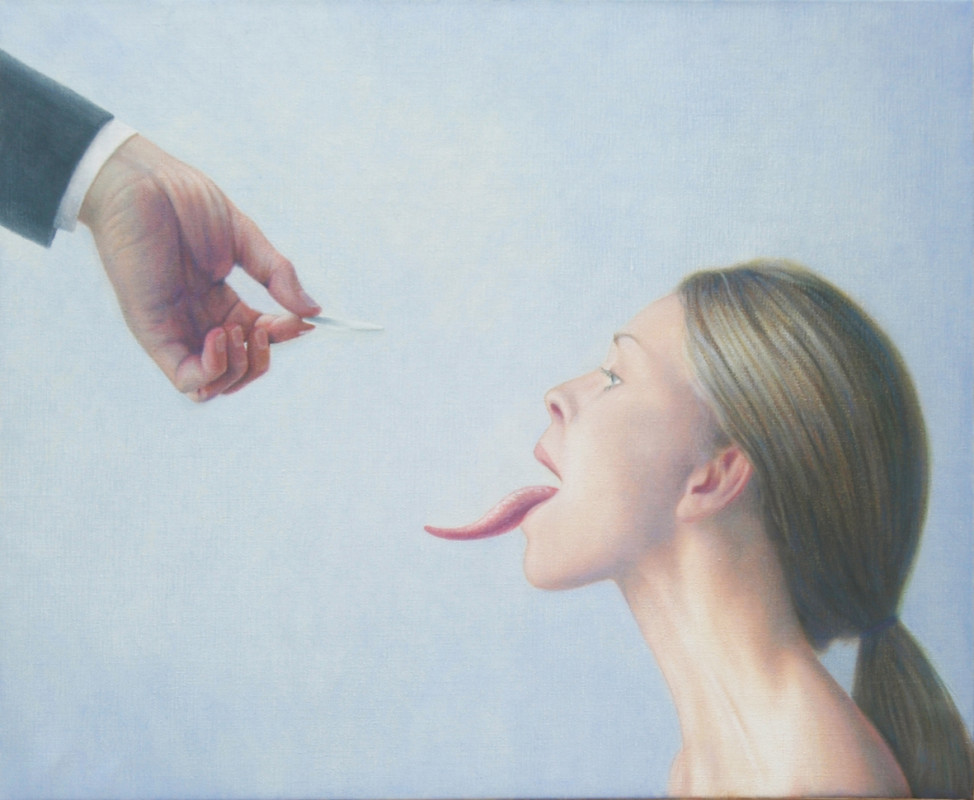 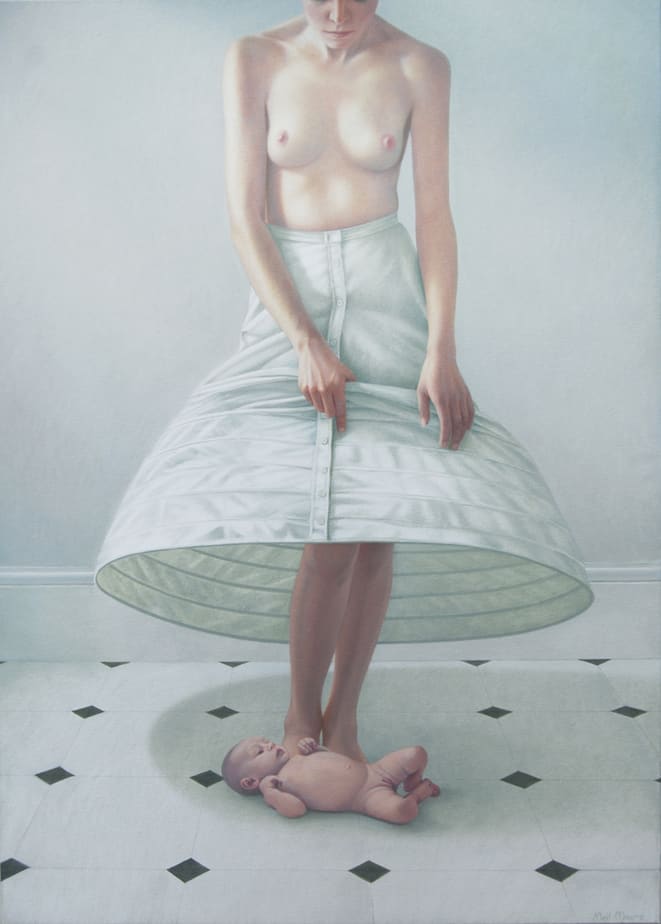 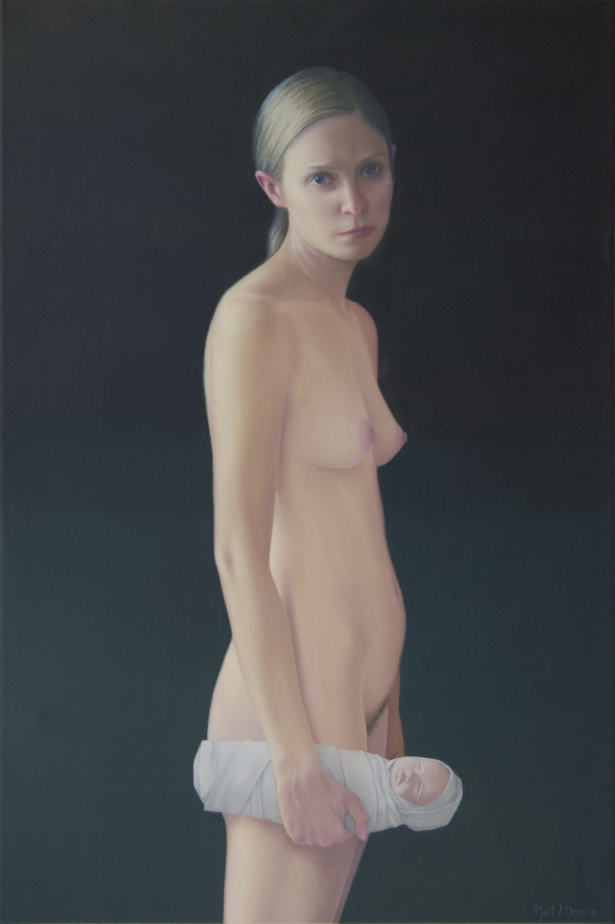 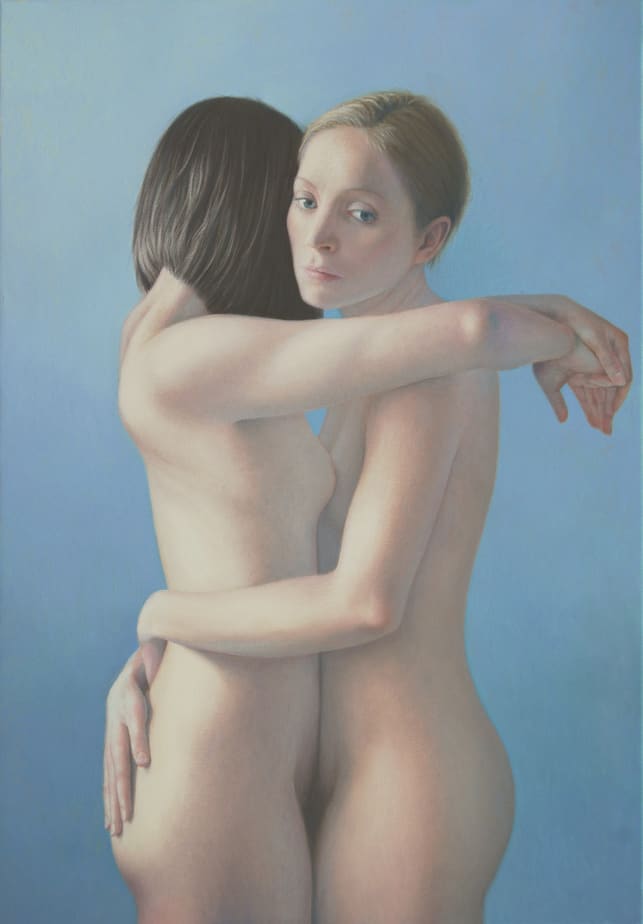