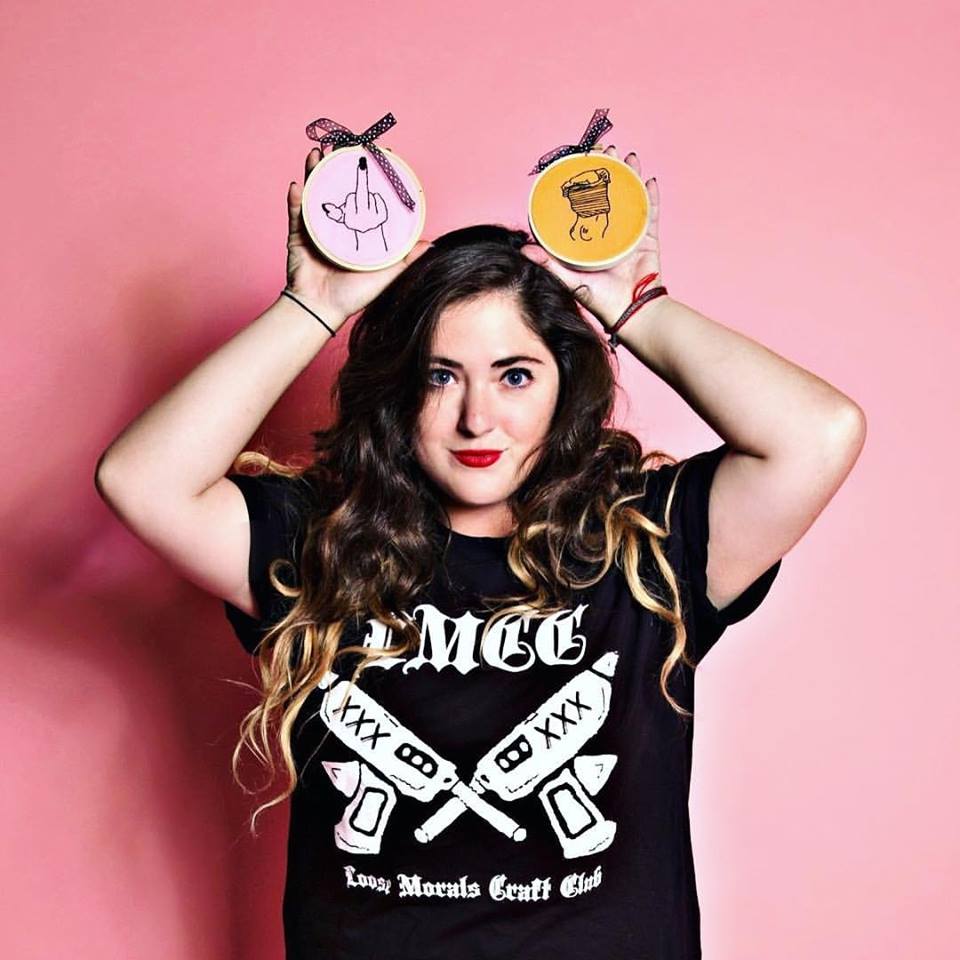 Idle hands aren’t always doing the devil’s work; but then again that all depends on what you consider to be deviltry. The mischievous nature of Lucy Orich’s embroidered pieces have an “inappropriate” charm that is playful, brash, clever and relative. At the core of Orich’s creation there is a moshing punkish audacity that is juxtapose with a deceptively domestic delivery. Metaphorically speaking, Orich’s body of work is sporting is a pair of tattered, ripped mom jeans graffitied with profanity and peppered with obscure patches; a dandelion yellow sweater from Ann Taylor draped gracefully around its shoulder; a pair of vintage Ferragamo shades and a circa ’92 Hillary Rodham Clinton coif dyed leopard–yes, leopard. It is a delightful walking conundrum that you simply cannot stop looking at. 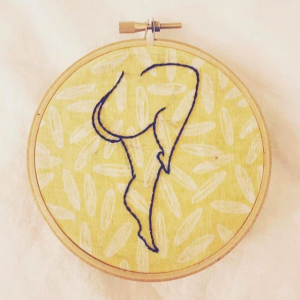 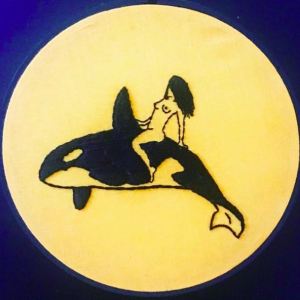 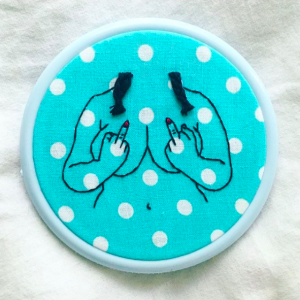 Orich, who currently heads a divine brand called Hooop There It Is, is a LA based artist who found her creative niche through boredom. Four years ago Orich underwent a tonsillectomy and what she decided to do with her downtime changed her life. We caught up with Orich who more than happy to provide us with a window into her artistry.

What initially drew you to embroidery?

“I knew that I would be bed ridden for about a week and decided this was the perfect time to pick up a hobby to fill all my downtime. On a whim I decided on embroidery, a mixture of being intrigued by the craft, and an inkling that I’d have a knack for it (due to having an artistic eye, steady hand, and tactile tendencies). I never would have guessed that 4 years later I was still doing it!” 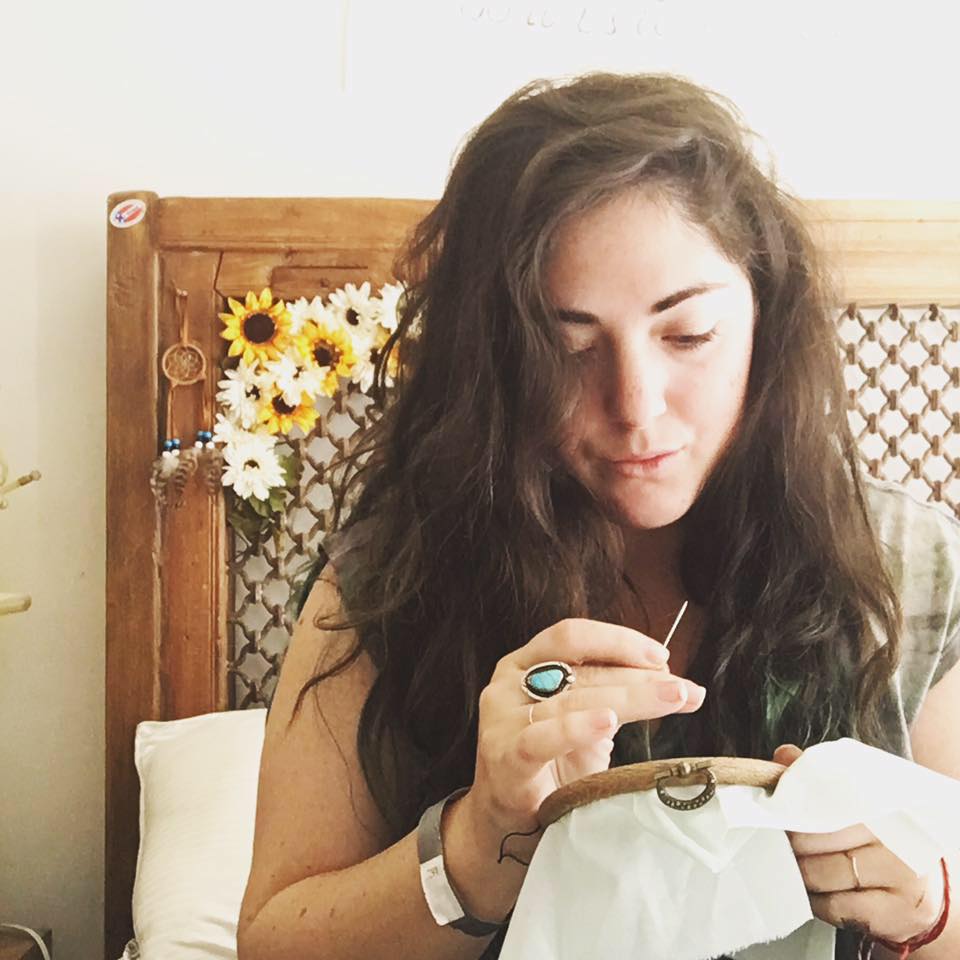 Do you engage in any other mediums or is embroidery your main squeeze?

“While embroidery is my main go-to, I have definitely dabbled in other crafts. I have found that if you’re generally a crafty person the skills seem to transfer to many other mediums. I have tried my hand at wood burning, watercolor, and knitting. At the end of the day I always find myself going back to embroidery. It feels the most comfortable and relaxing.” 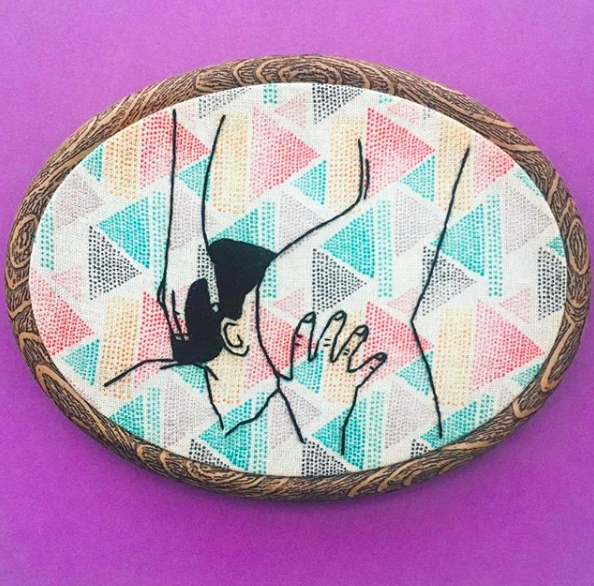 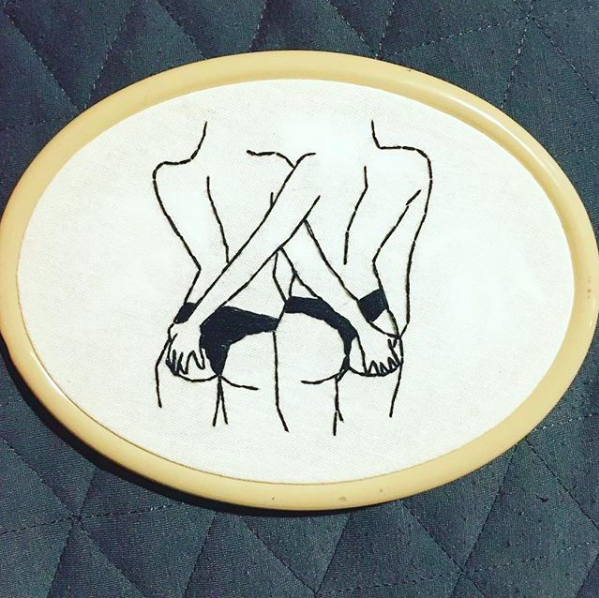 The craftsmanship isn’t the only draw when it comes to Orich’s work. Her pieces often have an empowering sentiment that propels fem-forward ideals such as body positivity, sex positivism and pizza. Orich is an artist with a sense of humor but she is also very aware of the sociopolitical climate and doesn’t hesitate to address the issues. Often collaborating with other artists, her work attempts to reconcile the reverberations of shaky gender politics and promote importance of allyship when it comes to male artists.

Your body of work, for the most part, seems to skillfully walk the line between feminine worship and the male gaze. Do you think both can overlap at any point?

“I think the two can definitely overlap. Two of the artists whose designs I embroider (with their permission) keep their gender anonymous, and I had assumed that they were both women due to the complimentary way they portrayed female sexuality. I came to find out that both artists were men, and when seen through that filter, some of their designs came off a little more on the side of the male gaze. So maybe the two overlap much more than we realize but it’s our own personal perspective (or bias) that determines which direction it leans towards. I also think there is a way to show women in a nude nonsexual way that can still be enjoyed by both genders, definitely riding that fine line. At the end of the day, my intention is not always seen (as with other artists) and people will read into the art how they see fit. 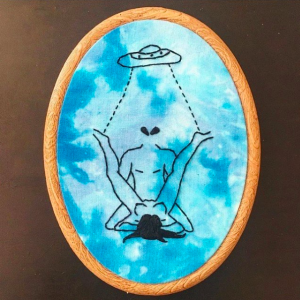 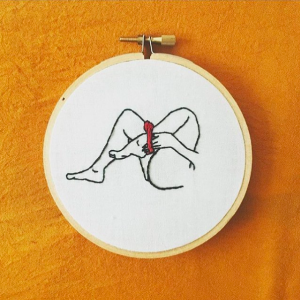 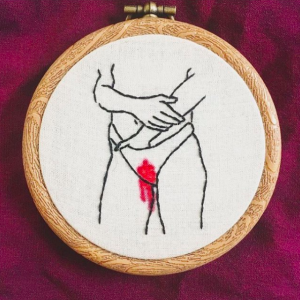 Perfect example: I had an embroidery of an alien and a woman fucking. There was a spaceship above them with light beams coming down. A woman on instagram thought the image was depicting an alien raping a woman, and thought the light beams were holding her legs down. The design was by a woman, and in turn embroidered by another woman (me) and nothing about the image would imply it was anything but consensual. People will see what they want to see with art.

There are a lot of art pieces I have in my home that some might argue are based off a male gaze and are over-sexualizing a woman, but if I don’t see it that way then that’s all that matters. Art will always offend somebody.”

What kind of influence does art have on gender politics?

“I think art can have a lot of influence on gender politics. Like I said earlier, it’s about normalizing women’s bodies and not always sexualizing them. The more we can do that, I think there will be a slow change in how society views women, especially women that are comfortable with their bodies. It makes me happy that there are wonderful male artists who work to desexualize women in their art, or equally sexualize men. It’s definitely about finding that balance, and over time I think (hope) it will start to make a shift.” 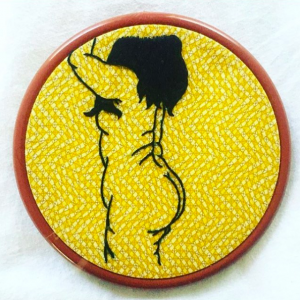 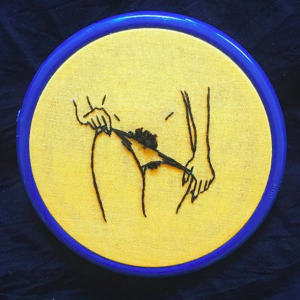 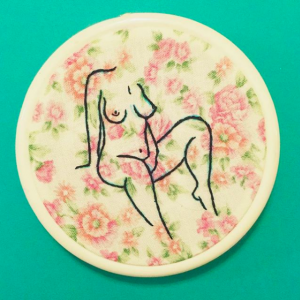 Orich is a modest modern artist who has managed to align serendipity with strategy. She is the quintessential hybrid, a creative who has effectively stitched together passion and profit. Showing yet another form of awareness, Orich has developed a burgeoning brand that compliments her love for embroidery. It isn’t easy for artists to achieve this kind of equipoise. Orich doesn’t have it all figured out but she remains an inspiration to the working creatives whose only wish is to dedicate themselves to the making of their art while still maintaining a decent quality of life. Orich is a tangible glimpse of our collective potential.

What is it like balancing the nuances of being a creative and a brand?

“This is definitely a tricky question and finding this balance is something I struggle with every day as an artist. As much as I’d love to just present my work and be freely creative, you have to “play the game” of creating and building your brand. As an emerging artist this was a very new concept for me, marketing myself is foreign to me but I’ve learned that it’s all about engagement. It’s about posting daily on instagram, following and interacting with other artists as well as potential collaborators. Working the marketing/networking side of instagram doesn’t make you a less authentic artist, it makes you a more widely seen and sought after artist. You have to be proactive and patient to get the results you want. It took almost 2 years of me posting daily to start seeing sales made through instagram, and even longer than that to start collaborating with businesses and other artists. It was around then that I shut down my Etsy and created my own website (hooopthereitis.com) because I had more autonomy over my brand and could market it better.
The truest answer is that the best way to balance your brand with creativity is to have a strong sense of who you are as an artist. When I first started stitching I was all over the place with what I would sew, there was nothing cohesive about my work. Once I started stitching more and more bodies, I realized that this was where I wanted to take my embroidery business. It’s intimidating to create a brand for yourself, I have no one to make decisions on what looks best and so much of it is trial and error to see what works and what doesn’t (RIP the 4 previous business card designs I’ve used). Having a brand that straddles that sexual line has been wonderful but also difficult. I’ve had to defend my work, as well as dealing with not being allowed to participate in certain events because of the adult nature of what I sew. At first it made me question if this was the right way to brand myself, but as I’ve become more confident as an artist, I feel more confident to back my brand. The beauty of being an artist is that it’s ever evolving and your brand evolves over time as well. In the past I’ve stopped myself from making certain pieces because it didn’t feel like it fit my “brand”, but FUCK IT. My art is my brand, my brand does not determine my art.” 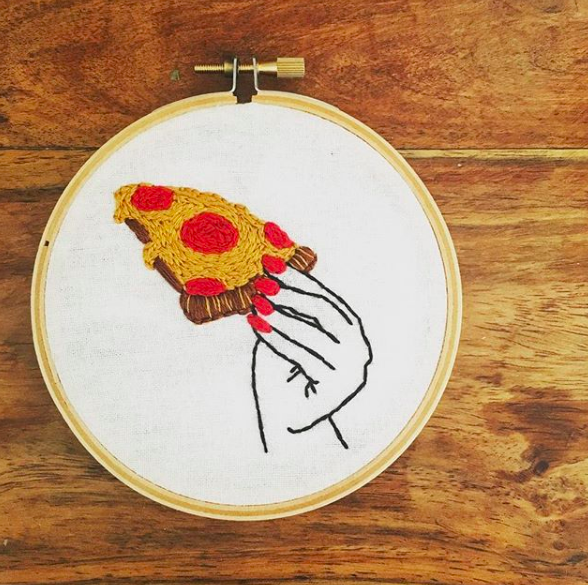 Any advice for aspiring embroiders?

“My advice for aspiring embroiderers is just to go and do it! I think so many people don’t try out art because they’re afraid they won’t be “good at it”. First off, who is to say what is good or not, and secondly, only by doing it will you get good at it. I’ve been embroidering for 4 years and still sometimes feel I’m not “good at it”. But the beauty with embroidery (as with most other art) is that it’s apple and oranges, and no two artists have the same style, skill, or aesthetic. It creates a really beautiful and supportive community of embroidery artists who encourage each other without feeling like your success is their failure. Because of that, it makes embroidery a wonderful craft to pick up, you’ve just got to get out there and do it! Buy a hoop, some thread, and fabric (or even your own clothing) and start sewing!”

Order Custom Pieces from Hooop There It Is!