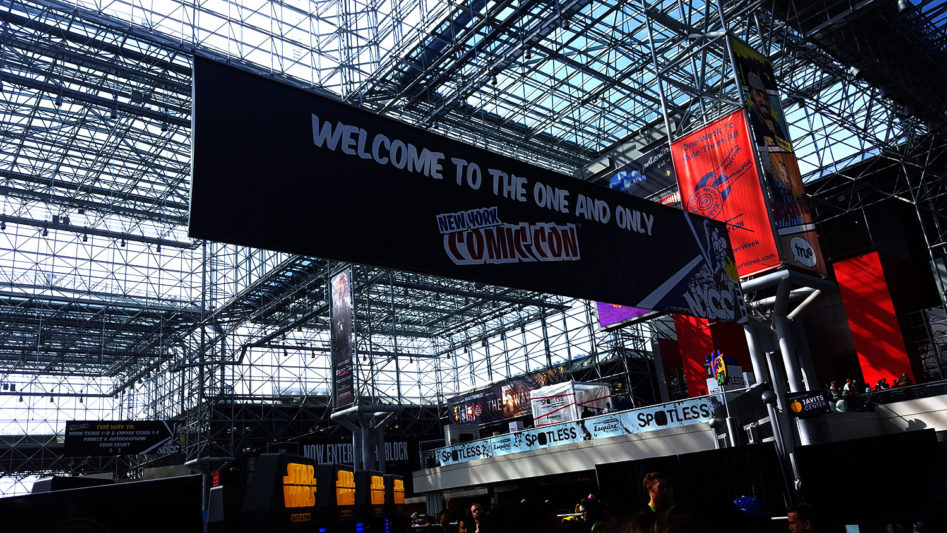 Comic-Con is for cosplayers—the followers, fanatics, and downright scholars of comic literature, science fiction, and pop culture. This much we hold to be true, as do the artists who engage with readers at their booths, as do the creators who monitor the enthusiasm for their products in panels. However, as our devices for self-expression merge increasingly with public marketing forums like Twitter, fans may notice their alternative subcultures becoming overshadowed by a newer nebulous, difficult-to-define, and highly profitable ͞”nerd culture.͟”

In many ways, Comic-Con and its major publishers are a reflection of the trending topics in commercial culture, with a Walking Dead premier gathering thousands upon thousands of fans at Madison Square Garden, MCU collaborating further with Netflix to launch AKA Jessica Jones in 2016, and Harley Quinn cosplayers—probably inspired by the upcoming Suicide Squad film—representing the most popular get-up probably three times over (Deadpool coming in not-so-close second). ͞”I͛’m seeing a lot of Star Wars this year,͟” reported one very well-spoken middle-schooler and seasoned cosplayer, ͞”which is really just about the movie coming out. Last year it was all Guardians of the Galaxy, and I don͛’t see any of that now.͟”

Some things don͛t change; representatives for Marvel and DC dominated the panels, artist booths, and most popular cosplay. The success of DC͛’s 2011 series relaunch of numerous keystone characters has also inspired other publishers to do the same (Dark Circle, for example, is celebrating their own reboot of The Black Hood and Sandman). However, some fans are growing tired of the endlessly integrating worlds like in the famous crossover Convergence, and it was heavily implied in several panels that their storylines would only continue to become increasingly intertwined. When I mentioned this in a sit-down with one comics superfan—Brooklyn native and comic collector since the age of 10, Peter Velez—he groaned:

Peter Velez: Crossovers have worked in the past. I was a sucker. I bought all of the Ra’s a Ghul crossover that they did with Batman. Crossovers are cool when they͛’re organic… The thing is that DC did this because Marvel had such success doing it—Wolverine and the X-Men was a great series that had its own feel. DC One Million and Sins of Youth were dope, and I heard good things about Doomed… I͛’m still waiting for some of those [DCU comics] to get good. When they launched the New 52, it was generally one kind of book. They had a similar look and feel. There wasn͛’t a huge difference between Hawk and Dove and Grifter. Then they had a soft remake of Batgirl, and basically moved her to Williamsburg.

PV: That was really good! They had art that didn͛’t look like all of their line. Babs Tarr is a great artist, and it felt like it wasn͛’t trying to fit in with all the other books.

MH: So the plan to get you more heavily invested as the worlds become integrated isn͛’t working?

PV: I check out immediately. I͛’ve been reading comics since I was 10 and I guess I͛’ve seen the cycles. Grayson, which has been one of their best books recently, is about to start a crossover event with a couple of the other books—like their Robin book, We Are Robin—so those three are going to be a crossover for I-don͛t-know-how-long. I͛’m not going to read it.

PV: I͛’m also in a bad spot because my favorite comic store just closed. R.I.P. Bergen Street Comics. Like, do I want to work so hard and pay this much money to follow so many titles?

MH: Crossovers and reboots aside, are you excited about any new titles?

PV: I am looking forward to Ron Wimberly’s upcoming Image books, cause I really like his work and overall style. I had also heard about Virgil, the new book Steve Orlando is writing. I had heard about and didn’t think I would pick it up, even though I love the Midnight book he’s writing, but after hearing him talk about it at a panel I was like, “Yeah, I WILL buy that”.

The new Captain Marvel book looks cool. When I was in Artist Alley I walked by Kris Anka’s table and told him I liked his work, and when I asked what he was doing next he just cocked a thumb to his banner behind him which featured a huge picture of Captain Marvel. Awkward. I had completely forgotten that they announced that book but it does look like it’ll be good.

Also, this wasn’t announced at the Con, but I’m interested in the new Karnak book that Marvel announced Warren Ellis is going write. Ellis is one of my favorite comic book writers of all time and his quick Moon Knight run with Declan Shalvey and Jordie Bellaire was dope and one of the best superhero books in the last few years. I’m interested to see what he does with Karnak, who is the Inhuman that I think has the coolest powers. I think the Inhumans are really cool to look at but maybe not so much to read about? I don’t know. I haven’t been interested in checking out any the new Inhuman books but Karnak I will most likely check out the trade unless the art looks bad.

MH: What have been your impressions of NYCC this year?

PV: Last year they announced that the attendance numbers were higher for NYCC than San Diego Comic Con, so that was very much in my mind this year. The convention seemed to be bigger than ever, both space and attendance wise. Even Sunday was crowded! Then there was the “off-campus” events at Hanmerstein and other places, but I didn’t go to any of those.

I admit to missing the older, smaller NYCC but that’s just the way it goes. It has been growing steadily every year but for some reason the size of it really hit me this year. I don’t think there’s any way to see the whole convention in a day because it takes forever to walk through the aisles. I don’t know how I would feel if I only had a 1 day ticket and only got to see part of the convention. Probably a little disappointed. Maybe so disappointed that I wouldn’t to go again the next year. But I guess NYCC has gotten to the point where repeat business is unnecessary and there’s now enough interest that there will always be someone willing to take your spot if you don’t want it.

MH: Did you meet any favorite artists in the Alley?

PV: Yeah! I got to tell Aaron Kuder and Greg Pak how much I loved their Action Comics run, especially their latest arc which was basically Superman vs. police brutality. I got to tell how choked up I got during certain scenes and how well I thought they handled it. They were really nice guys and seemed to appreciate it. I know that they got grief from Fox about that story so I’m glad I got to tell them what I thought. Plus they tabled right next to each other which was super convenient to get issues signed (I did not mean that pun).

I also got to meet Declan Shalvey, Joe Quinones, and Ed Mcguinness and tell those guys I like their work and picked up something from each. I also got a sweet Cyclops print from Jordan Gibson, who hasn’t done a lot of big work but I expect that’ll change over the next couple years. I also picked up some of Felipe Smith’s manga series, Peepo Choo, after hearing him talk about it at a panel, so I’m excited to read those.

NYCC 2015 was a spring of new literature and art, and a trove of old treasures. Still, while major publishers are turning toward the past for reinvention, fans and public commentators alike seem to be aware of a desperate need for diversity not just among the characters—Marvel received a lot of publicity unveiling Miles Morales as their new Spider-man, and Kamala Khan as Ms. Marvel—but among the creators themselves. Writer Alex de Campi joked about the predominantly white-male creatives of these top-selling publishers, who expect female writers to portray female characters, ͞”I tried writing with my vagina, but it was too hard, so I went back to writing with my hands. I can still write an incredible Superman.͟” On the same day, she tweeted:

͞”The #NYCC Black Comics panel had 350 sitting; 80 standing. But commix co͛s be like ͚Trump is popular; we should do conservative comix.͟”

Nonetheless, at Comic-Con, the only regret you could have is not meeting more people, asking them about their interests, their motivations for coming or their favorite new books. Trust that the people are good, and that they͛’re there for the same reasons that you are. ͞”If you͛’re at Comic Con and you͛’re an asshole,͟” said Comicsverse contributor Kay Honda, ͞”I͛’m like, get out. Why are you here?” The writers and artists are enthusiastic to support aspiring creators, giving advice on how best to get their online portfolios noticed (full sequences of art and dialogue being one example), and a number of panels were devised as workshops for self-publishing, portfolio-building and social media marketing.

All in all, Comic-Con is a prime opportunity for the hungry hippos like Walt Disney (which purchased Marvel in 2009) to push its products, but an invaluable experience for enthusiasts to meet their heroes and make friends of like-minds. The numbers in attendance will probably continue to increase, so fans may also keep an eye out for smaller conventions, such as the recent and well-received Flame Con.

Mary E. Hurt is a curatorial assistant, art handler, and writer living in Brooklyn. She graduated from Sarah Lawrence College with a degree in Art History in 2013. After a depressing experience working for an infamous vanity gallery in Chelsea, Mary began establishing a freelance network to depend on, assisting established and avant-garde artists in curation, installation, website development, and–most importantly–writing. She is excited to join the staff with Quiet Lunch Magazine and Smoothie Tunes, that dope music interview blog. In upcoming projects, Mary hopes to explore how counter-culture art and music stay alive in an increasingly corporatized playing field.