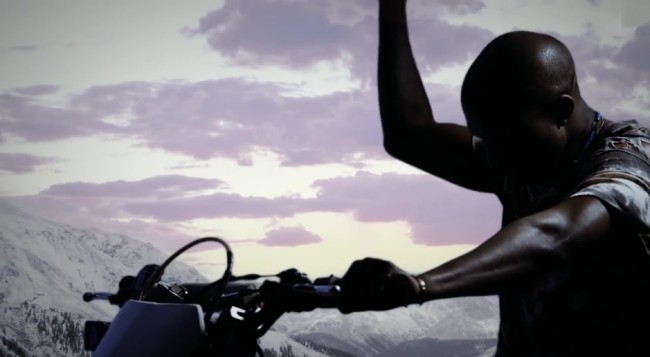 Directed by British fashion photographer Nick Knight, the video is an Americana influenced wet dream that features wingless Pegasus, flawless landscapes, and most importantly, Kanye West on a motorcycle with a topless Kim Kardashian.

The video premiered November 19th on Ellen and the internet went ape shit. There were mixed reviews at first, mainly because a majority of us were shocked and confused by what we saw. It wasn’t a topless Kim that shocked and confused us–no, no, that would be too easy. It was the vainglorious myopia of Kanye West. But even two weeks after the release of the video I thought to myself: was it really his vainglorious myopia? I have a different theory.

Many of us looked at the video and saw an overtly cheesy homage not only to Kanye himself, but to the publicized union between he and Kim Kardashian. For such a great song, choosing to use a Planet Earth highlight reel for the video seemed like a big mistake; and rapping in front of the footage, public access green screen style, was an even more unforgivable atrocity. Surely Ye is out of his gourd.

Or, better yet, maybe he is evolving the paradigm of the “urban superstar”.

Now, I myself have been a fan of Kanye West for a very long time and I’ve witnessed his tragedies, his triumphs, his buffoonery and his streaks of genius; so I may be a bit bias in my stance, but did we ever stop to think that the video for “Bound 2” was suppose to be “terrible”?

I can easily see why a majority of us would assume that West was being 100% genuine. I get it. Kanye West is a gifted megalomaniac with a penchant for worshipping his own efforts and canonizing his own self image, so it is highly possible that he legitimately convinced himself that this video was the best thing since sliced bread. But why would he go out on a limb with such a tacky visual display?

“I wanted to take white trash t-shirts and make it into a video. I wanted it to look as phony as possible. I wanted the clouds to go in one direction, the mountains to go in another, the horses to go over there. I wanted to show that this is the Hunger Games. This is the type of imagery that’s being presented to all of us, the only difference is there’s a black dude in the middle of it…”

– Kanye West | During a recent interview with the Breakfast Club on 105.1

After offering up his explanation we all accepted it with raised eyebrows and became further bewildered by his Hunger Games comparison. But the skepticism and bewilderment isn’t worth a velvet painting of a whale and a dolphin getting it on.

When Kanye West first stepped onto the scene we thought he was great, and we wanted him to stay that way. But like most great artists, Kanye West’s work isn’t going to be restricted by what we expect of him. Kanye West is no longer just an arrogant showman with sociopolitical leanings. West is blossoming into a conceptual mastermind who uses artistic visions to overthrow all standing legacies; even his own.

What we expected from West and the “Bound 2” video was a coherently passionate display of aesthetically pleasing egoism–you know, the usual arrogant fare that we chide him for but continue to eat up.

What we got was defiance, a proverbial scoff at our expectations. An audience can asphyxiate an artist’s creativity if that artist constantly gives the audience what they want.

Instead of giving us what we wanted, West gave us what we needed: a satirical masterpiece… a sarcastic portrait of media consumption and ideological propaganda.

Those who chose to condemn the “Bound 2” music video are acting like nearsighted sheeple who failed to realize an artistic concept that revolved around visual irony. These “sheeple” also forgot about Kanye West’s stellar track record as a producer, rapper, and overall creationist.

The video for “Bound 2,” despite Seth Rogen and James Franco’s best efforts was already a spoof. He was poking fun of Western imperialism. He was putting a funhouse mirror up to an outdated American Dream that cloaks the underbelly of a classist and institutionally bias nation–and he did it all underneath the guise of a “bad” video.