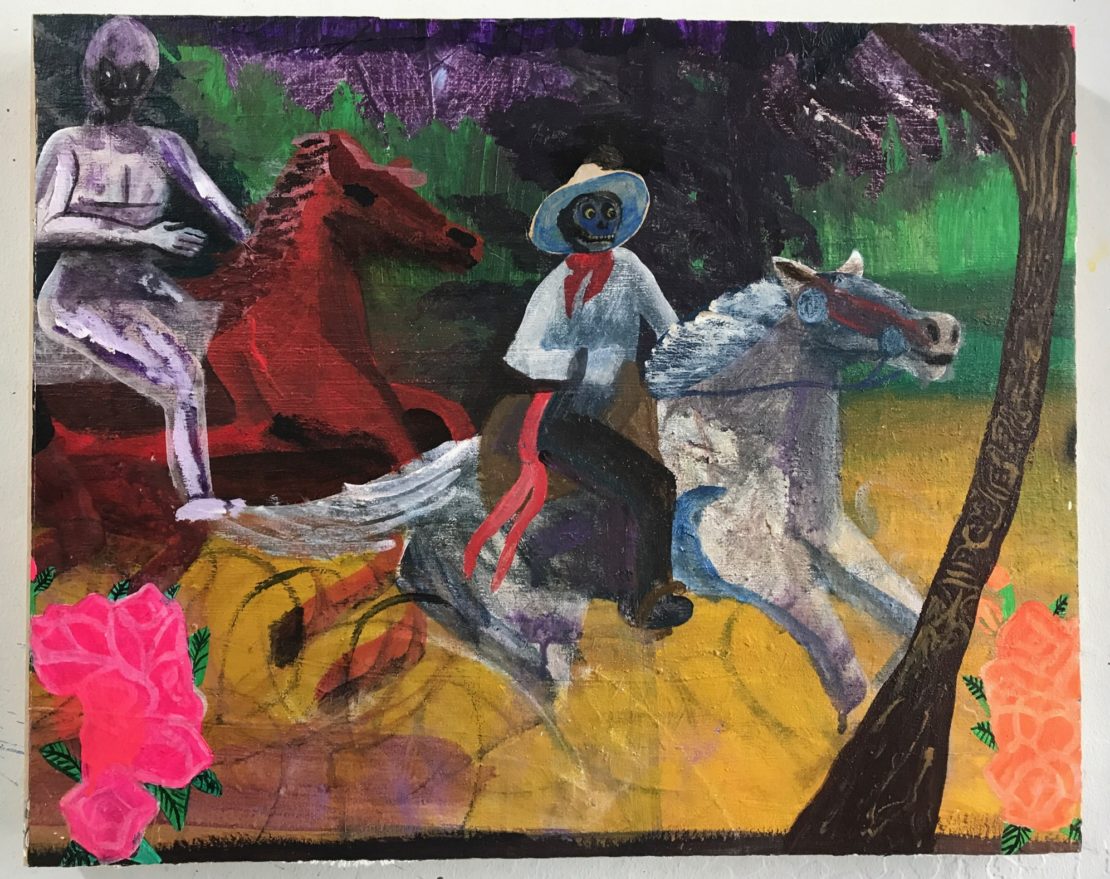 It’s been “stay inside weather” in San Francisco recently, or at least that’s how the artist Joe Roberts, who’s lived in the city for 20 years, describes it over the phone. As pretty much everyone knows, massive, increasingly destructive fires have been ripping across the state of California (most have been extinguished as of this writing), and though towering flames haven’t threatened Roberts, his home, or his city directly, the smoke has made it difficult to head outside and into the woods with his girlfriend, his dog and the psychedelic du jour, a favorite pastime and crucial element in his creative process.

On December 4th, Roberts will be releasing We Ate The Acid (61)A3HT3TA3) with Anthology Editions, a monograph of sorts featuring over 100 new and recent visual psychedelic musings, all tripping on the playful nexus of objectivity and subjectivity, simulacra and simulation. The book opens with a foreword by journalist, documentarian and one of our foremost young psychonauts, Hamilton Morris (check out Hamilton’s Pharmacopeia on Viceland) as well as a conversation with gallerist and actor Leo Fitzpatrick, director of New York’s Marlborough Contemporary.

“There’s a Grateful Dead record, Aoxomoxoa (1969),” begins Roberts, offering some insight on the book’s title. “On the back of the album jacket, it says, “We Ate the Acid” somewhere. I wrote it backwards to be trippy. I was eating a lot of acid when I did what ended up in the book.” 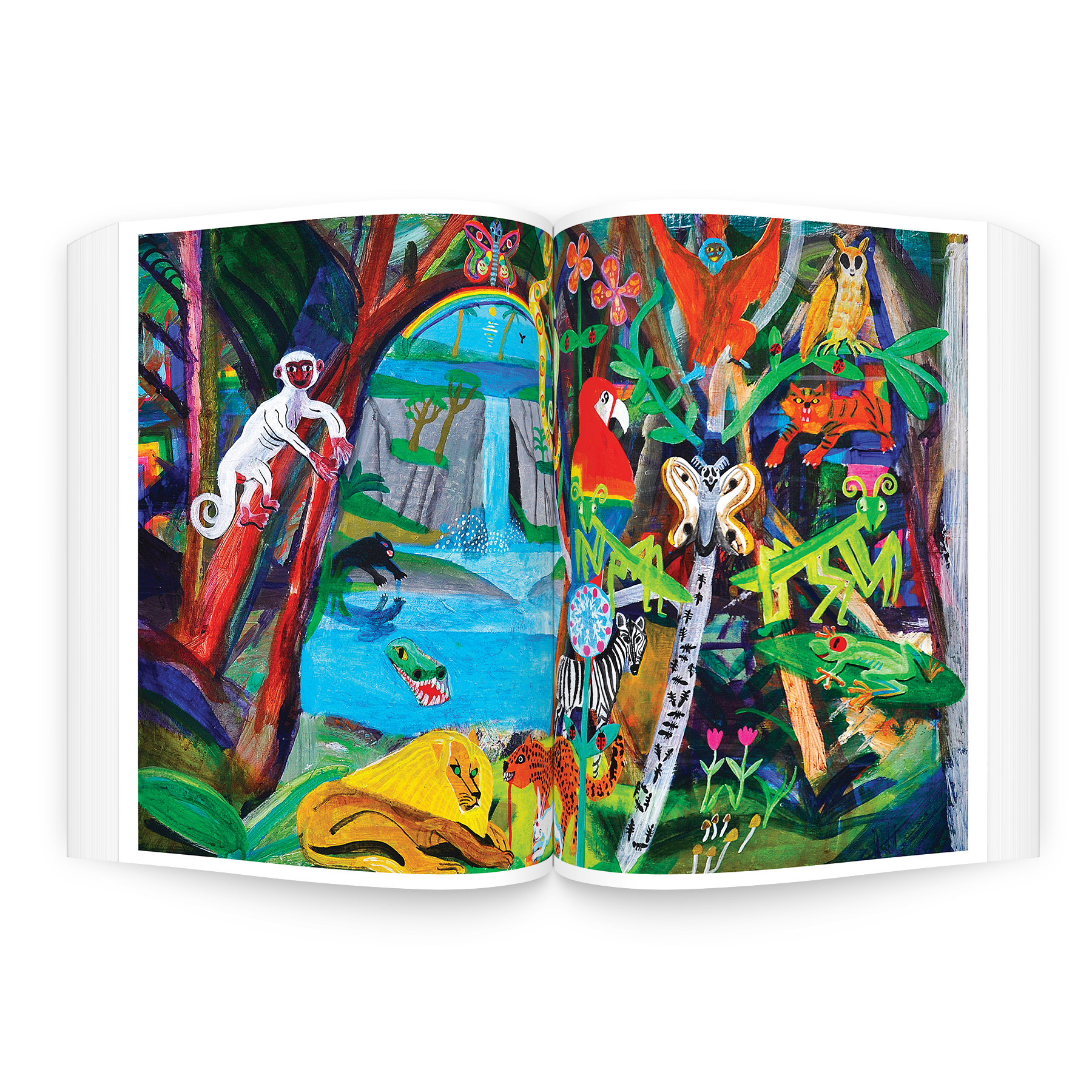 Roberts previously published a 160-page bound-and-sewn book called LSD Worldpeace (2015) with Unpiano Books, featuring a “year-long curated survey” of 142 full-color reproductions of his pieces, collages and dioramas. Not one to shy away from his lifestyle and vision for the future, @lsdworldpeace is also the artist’s Instagram handle.

Earlier this month (November 9th through Dec. 21st), as the fires were in full swing, Roberts opened up a solo exhibition at Capital Gallery in San Francisco called, Earth-1218. “In the Marvel comic book universe, there’s many multi-verses,” he says. “The one designated as the one we exist in when we’re reading Marvel comic books is called Earth-1218.” Roberts made roughly 19 paintings for the show and though the gallery and others might rightfully claim the exhibition is about all sorts of heady stuff rendered through a meta lens of pop culture-magical realism, he would simply say it’s mostly about plants and animals. 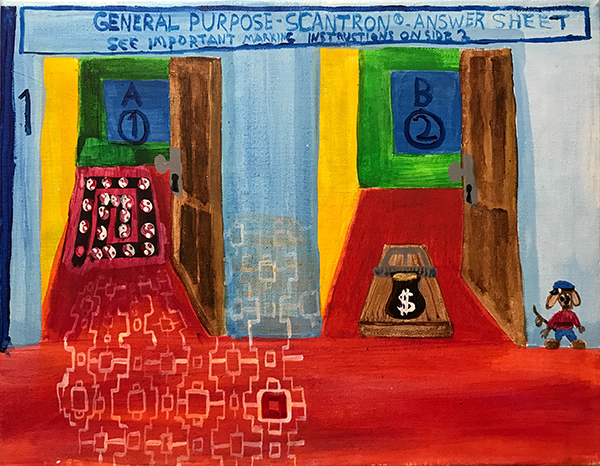 It’s mentioned to Roberts that humans, generally speaking, aren’t treating plants and animals too well. “It’s just our place in it all, that we’re here to see it,” he retorts. “It’s unfortunate. It’s insane to think about polar bears becoming extinct in my lifetime, and that’s my sister’s favorite animal.” 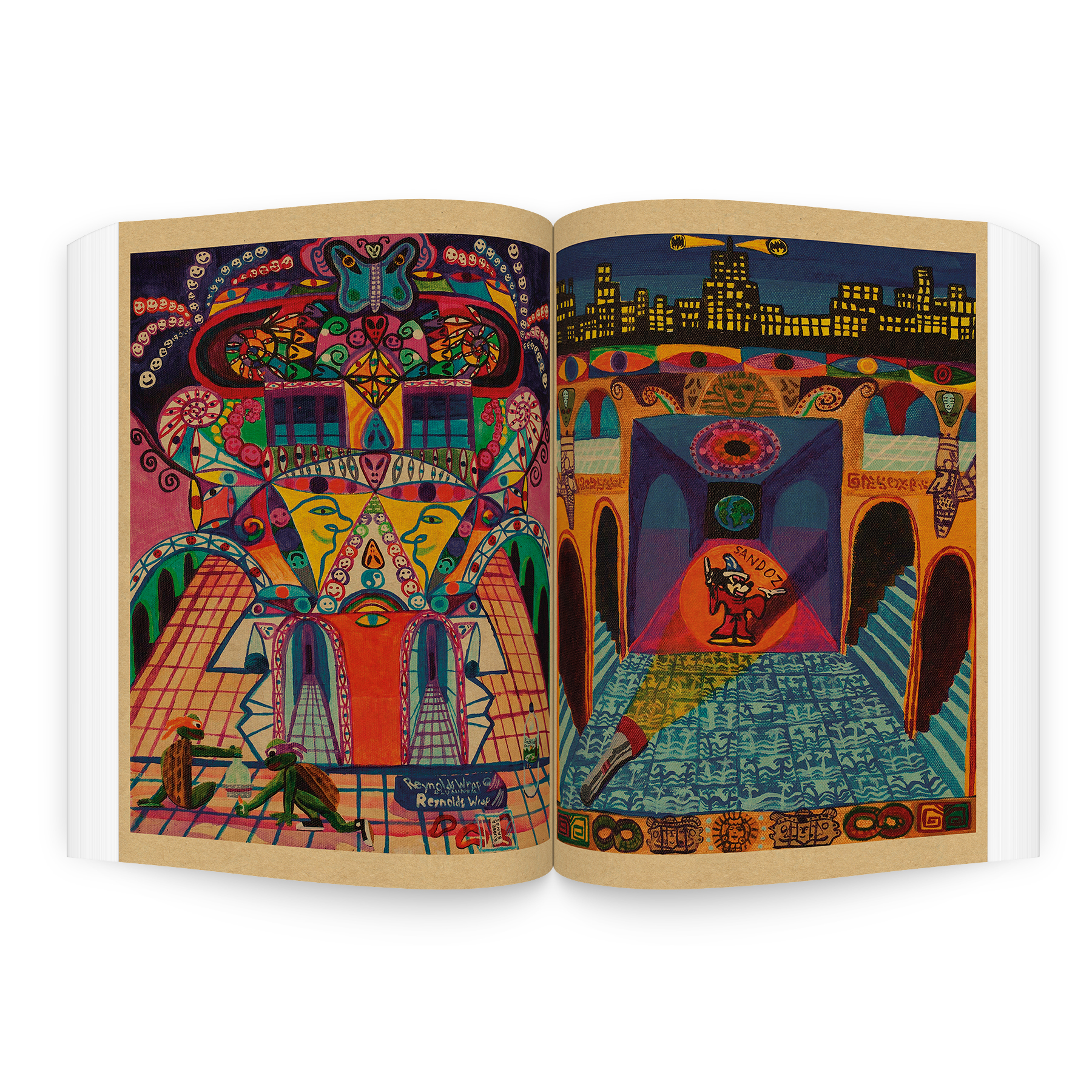 When “smelling the smoke” is far from a metaphor, it’s natural for it to feel like the end times are fast approaching. Roberts, however, knows human beings have felt this way since the dawn of civilization. He also knows that at a certain point in life, one acquiesces to the brutality of the increasingly hot, churning furnace of life. Why not stop and smell the roses? “Imagine what your body feels like when you’re 70,” he asks of us. “Just bending down to tie your shoes becomes annoying. I can’t get mad at anyone. Now that I said that, I feel like I sound like a selfish old dick.” 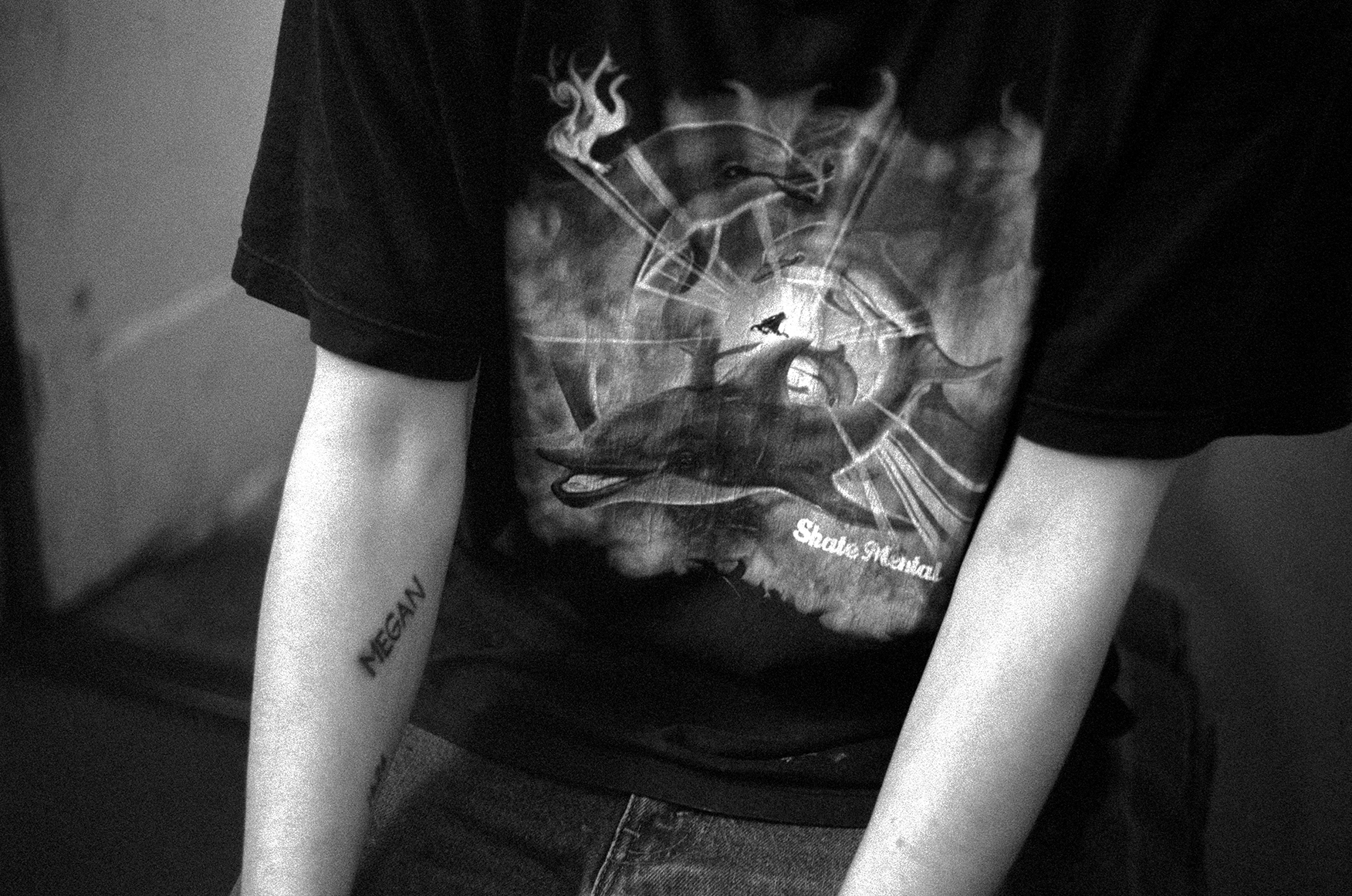 Roberts, now 42, also knows that the toxic, dopamine-fueled nature of social media, contentious identity politics, a fickle economy, Trump, Mueller blue balls, school and public shootings, climate change, the global refugee crisis and how all these issues thrive and intersect in an endless, relentless news cycle, have compounded this human phenomenon. This present incarnation has even been called “millennial anxiety.”

“I don’t know how I can change anything,” he says with a breezy sigh, wondering if his own youthful fire for larger action and rebellion is not only still lit, but if it was ever ignited to begin with. “As small as that window is (for action-for fire), it’s the only window I know. I don’t really give a shit about “so and so” on Instagram. Social media is a strange thing. It’s mostly superficial. Like if you had a piece of cake that wasn’t very good but the frosting is awesome.” 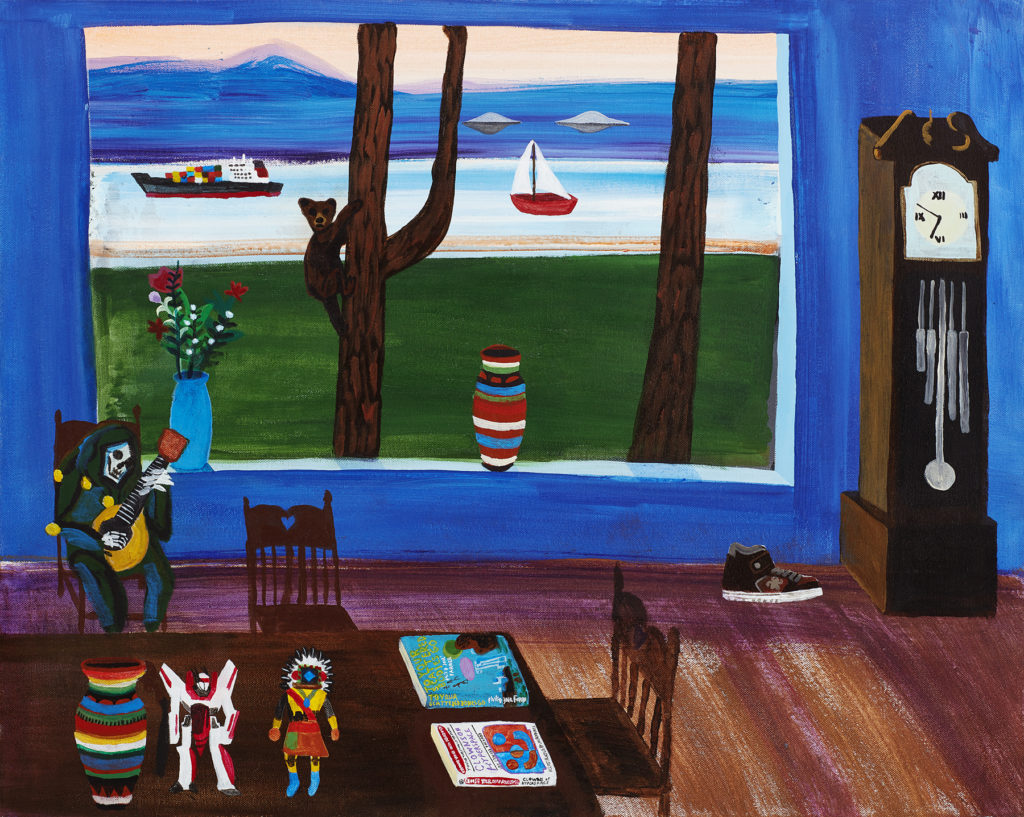 Roberts could be talking about American life and culture as a whole. Anytime a system becomes too ubiquitous and pervasive, it demands more space and attention. Social media is culture now. It’s officially soaked through. Is there even a distinction anymore? How many articles now feature a random selection of Tweets as their thematic backbone?

“Everyone has an opinion,” he says, “but I’m kind of with the old people at this point. Maybe I crossed that line.”

Roberts actually credits his Grandfather for showing him the DIY art ropes. So maybe he’s always been an old soul. He hails from Madison, Wisconsin, but spent a great deal of his youth growing up in Milwaukee. In many ways, Wisconsin is the American epicenter for “outsider” art, or perhaps more appropriately, “self-taught” artists. The John Michael Kohler Art Center in Sheboygan provides strong evidence for this, but in a strange quantum, chicken or the egg sense. Maybe there’s something in the water that pushes people towards a casual, but quietly obsessive backyard mysticism. 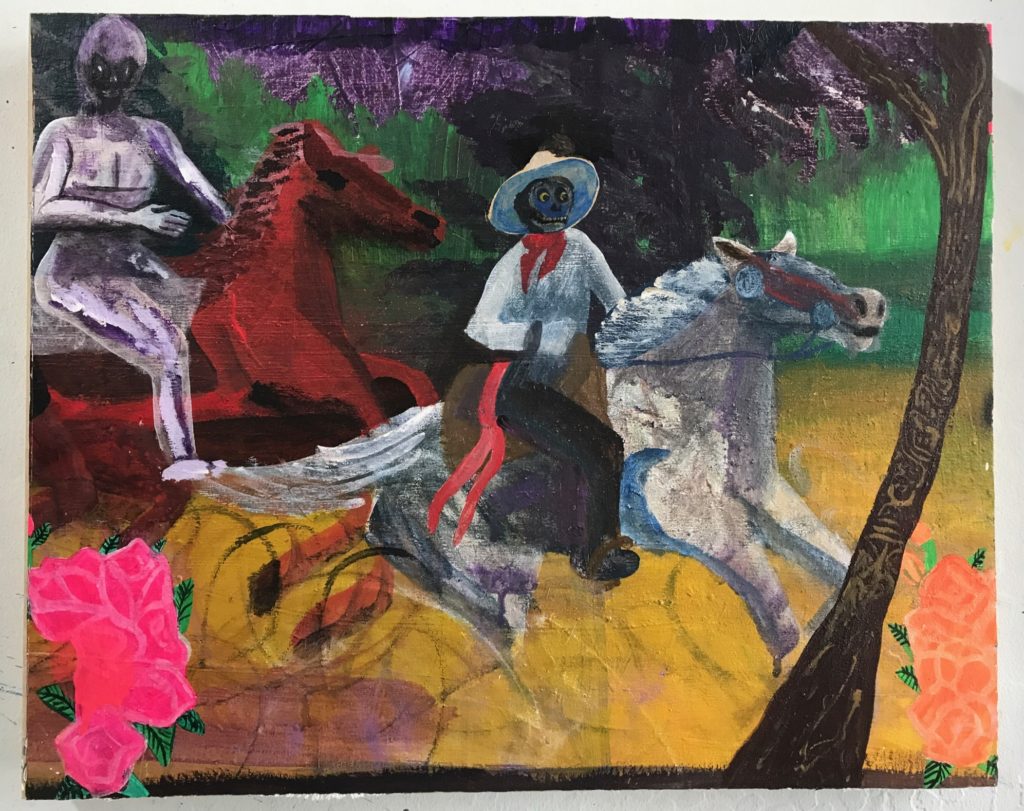 Roberts’ Grandfather, a WW2 vet who was lured away from engineering and into art making after taking a figure drawing class, pushed his grandson into art the way Rick pushes Morty into symbiotic, hyperbolic adventuring. “Part of me learning how to make stuff with him was going out and collecting garbage,” says Roberts. “He taught me which dumpsters were the good ones to go in, which railroad tracks had the coolest stuff, what beaches had the best driftwood.”

Roberts moved to San Francisco in 1998 and spent two years at San Francisco Art Institute before deciding it wasn’t really for him. “At the time, it was pretty open in terms of what you could get away with,” he says. “I’m not sure I learned much of anything but how to roll better joints. I realized it was a weird waste of money; money I didn’t really have that I was borrowing from the government. I did not continue on.”

Roberts did continue making art, however. His father, a librarian and avid comic book reader, introduced Joe to the creations of the late great Stan Lee as much as the perverse and strange world of R. Crumb. “I was mildly disturbed, but really interested too,” he says of Crumb’s world. “I had to keep looking.” 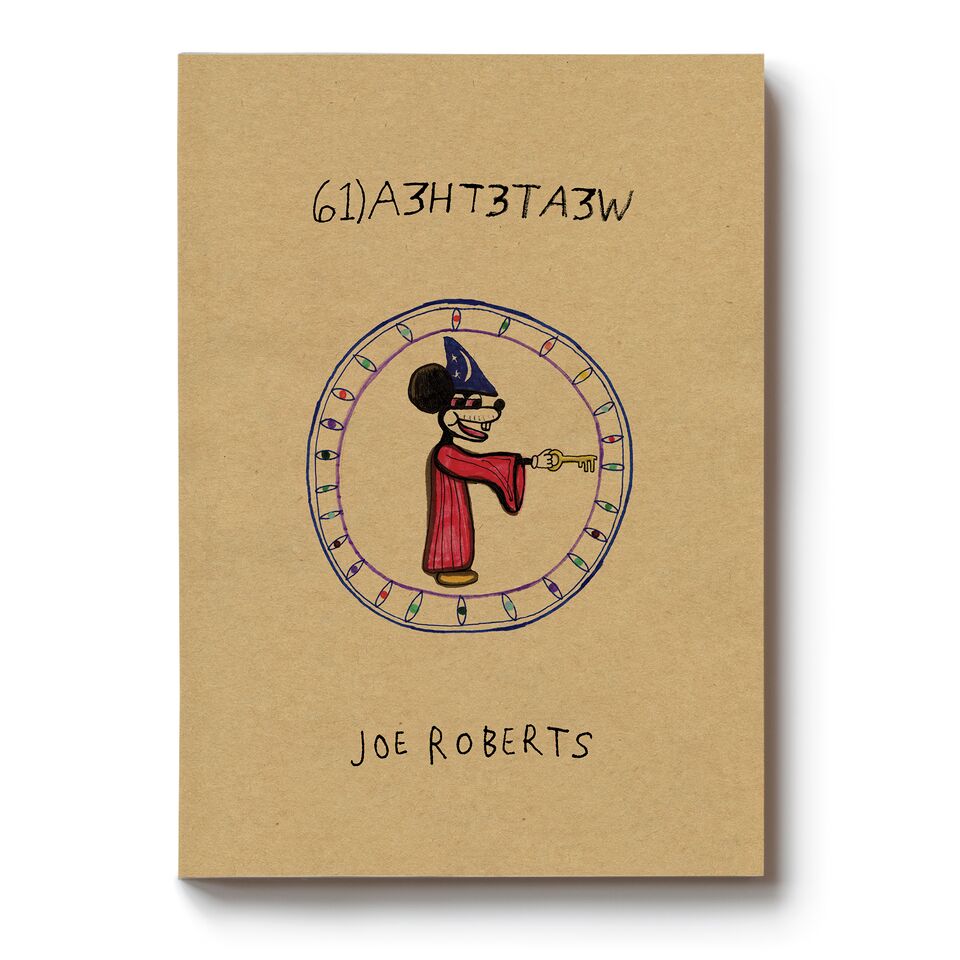 We Ate the Acid by Joe Roberts, published by Anthology Editions

Roberts still carries Mickey Mouse’s Sorcerer’s Apprentice character, who he often calls “Weezy,” or the Teenage Mutant Ninja Turtles into his own contemporary landscape, which is equally inhabited by painterly allusions to Pablo Amaringo, Jean-Michel Basquiat and Joseph Cornell. This unique aesthetic, pushed through a Lewis Carroll keyhole, has endeared him to a growing community of musicians, skaters, filmmakers, and street-wear companies, most notably Supreme, who enlisted Roberts’ imagery for their Fall 2017 line, where he produced a series of signature t-shirts. 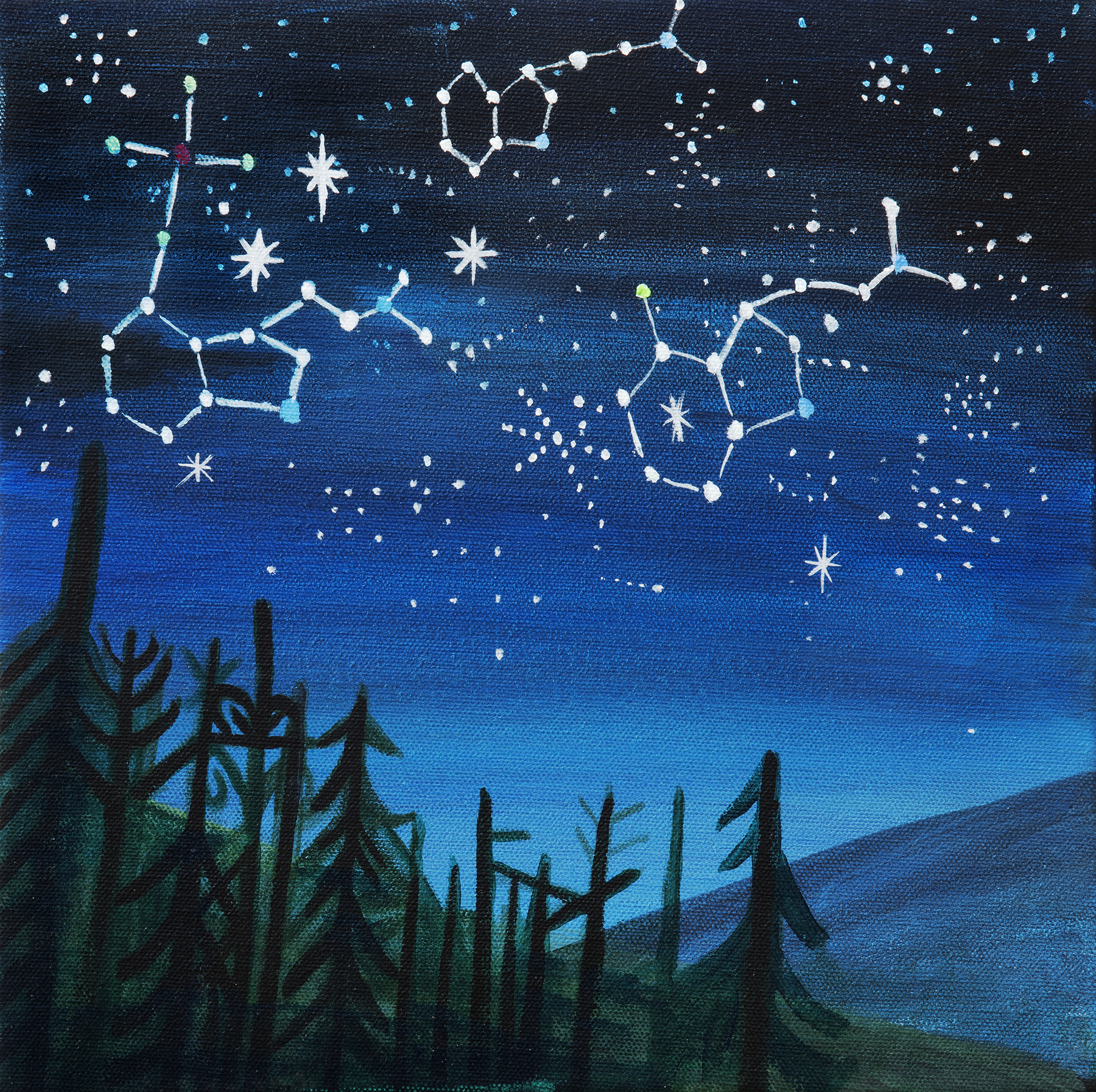 Most interesting however, is Roberts’ casual, no-frills affinity for psychedelics, primarily LSD (acid) and psilocybin, the active ingredient in “magic” mushrooms. “I can draw all day on acid,” he says. “Mushrooms, you have to take that time to let it do its thing. You come back to where we are and it’s like, ‘Ok, I still have to do all this painting.’ Luckily, I enjoy painting. It helps me bring back the fun parts of life I guess.”

Roberts, ever the accidental outsider, also swerves the larger cultural implications of psychedelics, whether legal or academic or regarding their collective role in alleviating the oppressive nature of PTSD, or how they fit into a larger, neo-Western, reverse colonial (culturally violent when ignorant, purely tourism-based, or grossly capitalistic), pseudo-shamanic landscape. He just, simply, likes them.

That being said, living near the tech capital of America, he’s quite aware of the proliferation of “microdosing” and how Silicon Valley coders (self-presumed disrupters) especially are using it to tune more deeply into the binary (and ternary) conversation to ultimately become more efficient cogs in the larger capitalistic machine. How soon before the grand entheogen goes the way of 5-hour ENERGY?

“That’s not how I use psychedelics,” he says. “It’s something the kids are doing, but it seems like they’re missing the point, right? When I started taking psychedelics, microdosing meant you didn’t take enough. Take more!” 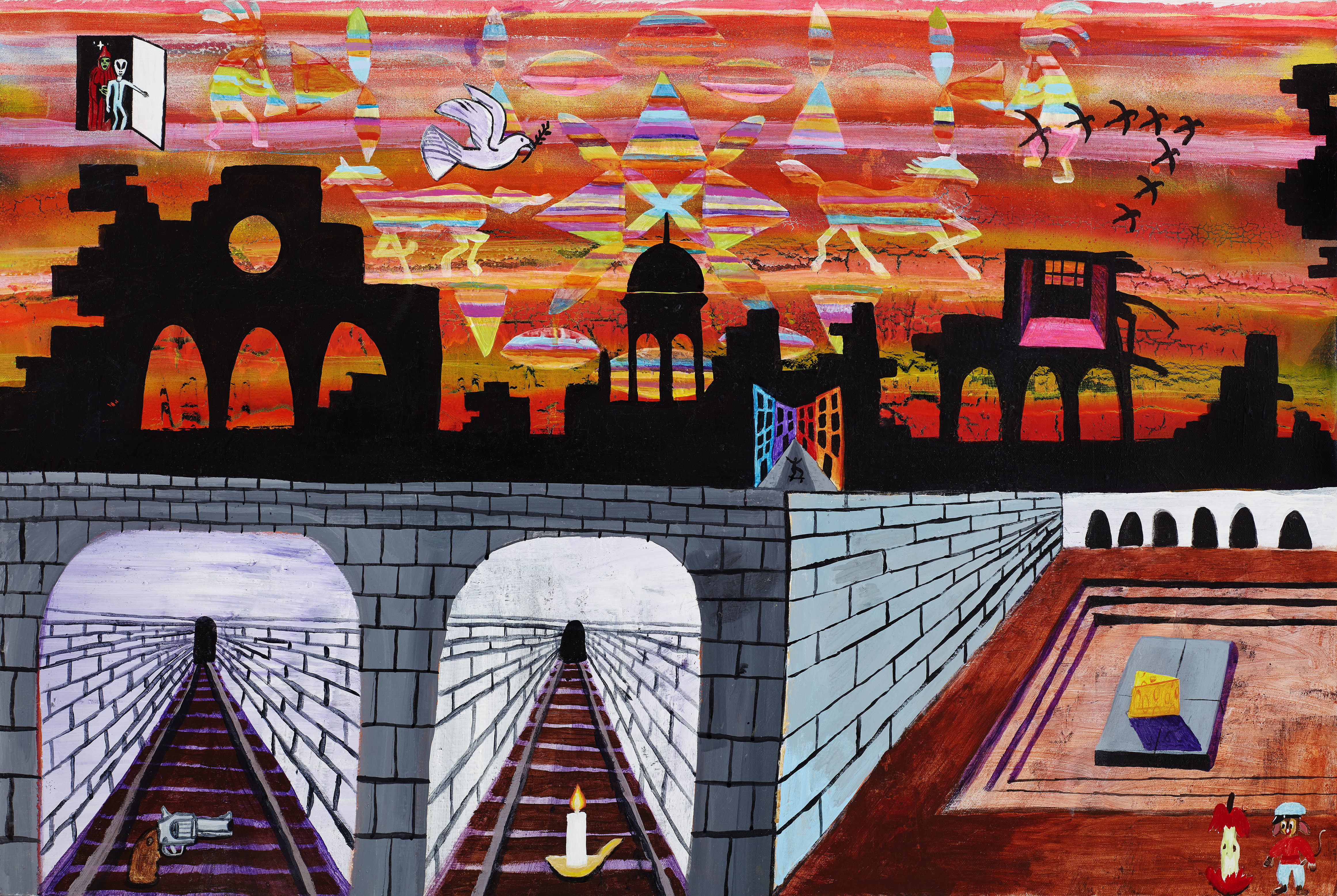 In Hamilton Morris’ foreword for We Ate the Acid, he touches on the idea of a new “Western Mysticism” and how Roberts, unburdened, seems to inadvertently slip in and out of this larger contemporary conversation like an artistic, inter-dimensional Tom Bombadil, not super concerned about the return of Sauron, for instance-that’s the Fellowship’s problem-though he’ll help out in his own way if he can. Robert’s ethos is, perhaps, something a little closer to The Tao of The Dude (check out the book of the same title, written, illustrated and edited by Oliver Benjamin) as witnessed in The Big Lebowski, just sub out the White Russians for some LSD.

“The whole thing about all of it is, I don’t care about the words,” says Roberts. “For example, I don’t like when people call it ‘medicine.’ I’m like, ‘What the fuck are we talking about here?’ Why do you have to be sick to take something like this?” 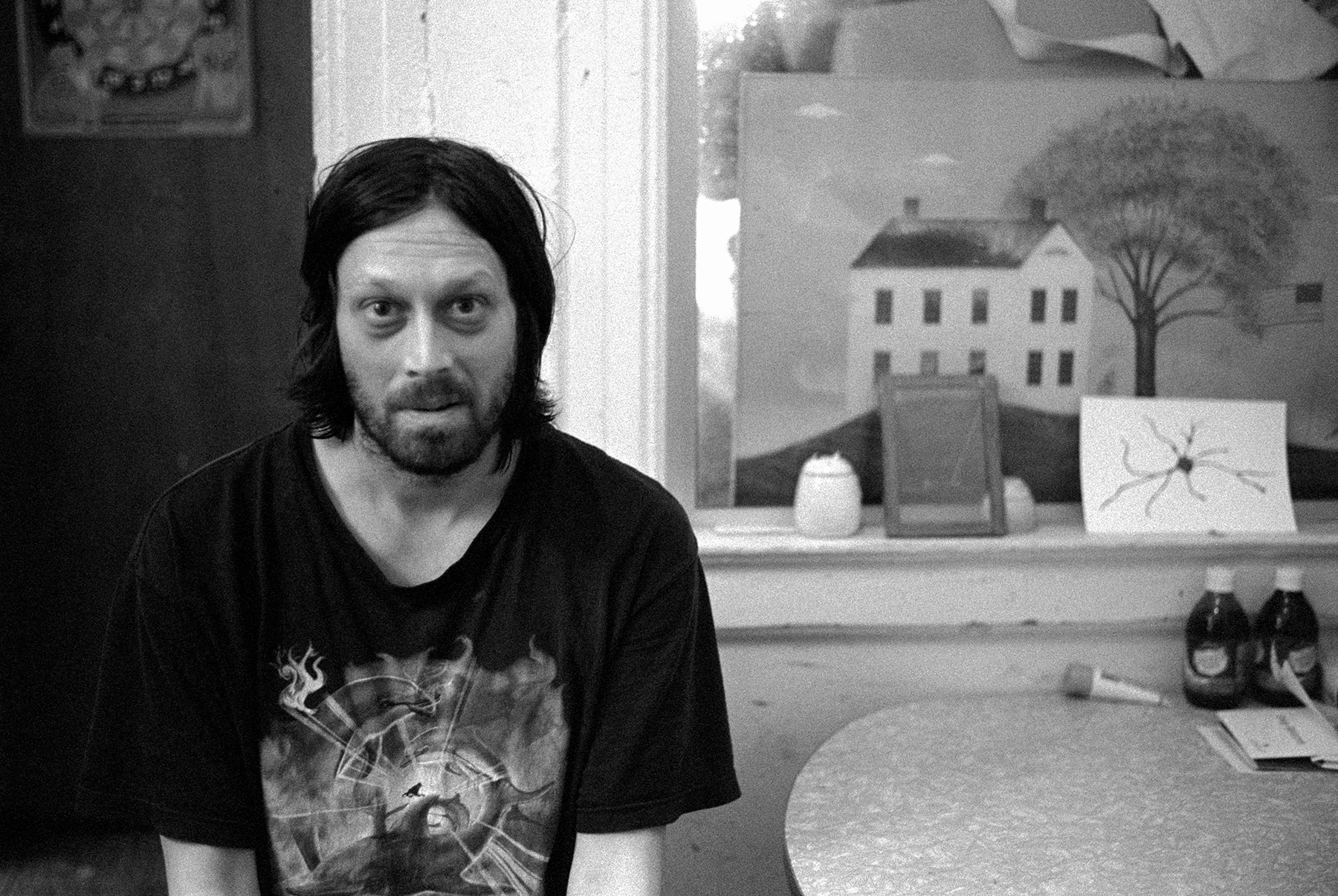 Ancient, indigenous cultures, of course, especially shamans in Central and South America, use this term primarily because compounds like Ayahuasca or yagé, have proven medicinal properties, as much for the body as the mind or soul, the latter of which is obviously extremely difficult to quantify, and isn’t this the heart of the issue: psychedelics’ greatest powers can’t be fully rendered, measured, articulated and held up to the masses. So, white westerners have appropriated this term, “Medicine” to navigate the prevailing cultural stigma (post and [not] past drug war) and the general illegalities surrounding these compounds. When used in casual social conversations, however, it can come across as ridiculously pretentious. We are in need of a perspective shift on how we view these things. Regardless, all this chatter doesn’t really pollute Robert’s little corner of Earth-1218, ultimately a portal to something surprisingly vast; perhaps infinite. 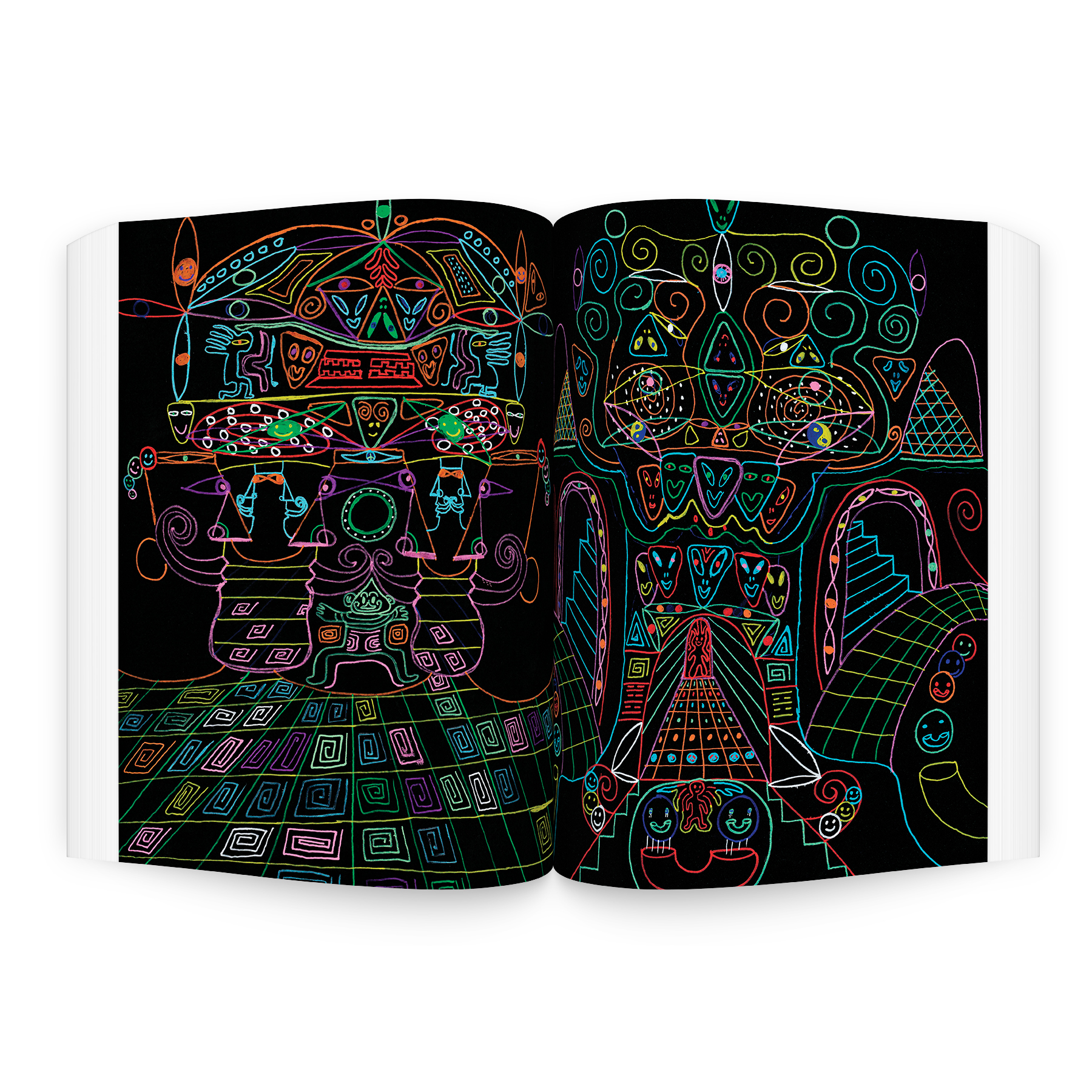 “When I first started eating mushroom and acid, it was 100% recreational,” admits Roberts, naturally. For the artist, it’s more about a call to adventure rather than subservience to a particular faith, lifestyle or ideology. If people can find some sort of valuable data, some tools, clues or life lessons in his work, that’s just a happy bonus. “When my father passed away, I started dating this woman and she had a different approach, which I adopted. It was a better way to use them, but it still seems recreational to me. I’m just hanging in the woods eating mushrooms with my girlfriend and my dog. I don’t know what else to say. If anything, it’s that maybe psychedelics grounded me in a way, because it showed me you can enjoy the world even if it’s falling apart all around you.” 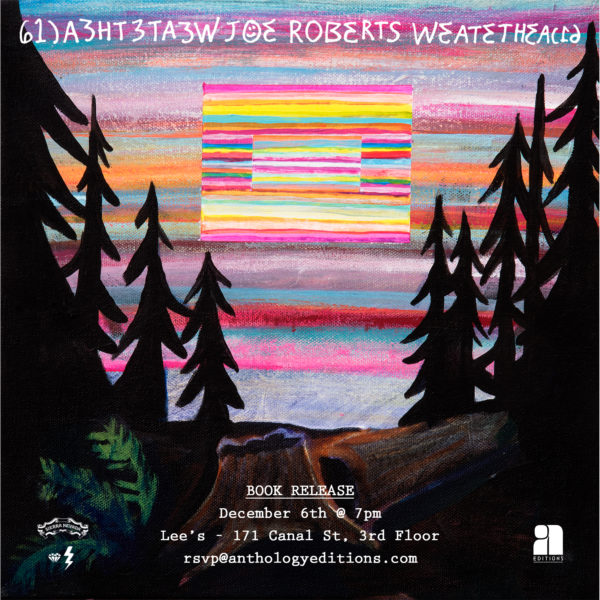