There’s a moment in the third act of Pacific Rim: Uprising (2018, dir. Stevens DeKnight), right in the middle of its thunderous final battle, where a character runs by a giant mecha statue right in the heart of a Tokyo. This moment single-handedly ruined the whole movie for me. Yes, I had already been engaged by its metal munching, monster-crunching battles. Yes, the cringe-inducing wooden dialogue had me imagining stuffing popcorn into my ears. But I was willing to wade through the highs and lows of the film up until that statue showed up on screen.

The statue was of a Gundam. 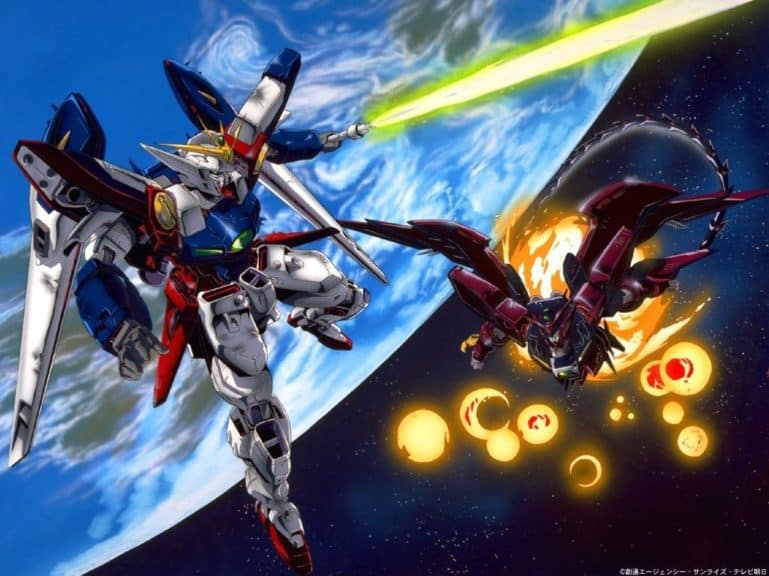 Mobile Suit Gundam Wing in all its glory

Back in high school, the Gundam animes became the first series I was able to finish. These shows were so influential, in fact, that they became the first series I collected on DVD. I bought the box sets of Mobile Suit Gundam Wing (1995) and the complete Mobile Fighter Gundam G series (1994), coughing up most of my hard-earned summer job cash in the process.Why the Gundam series stands out in my mind as one of the most riveting mecha anime ever created is simply because it was more than robots punching each other for twenty-four episodes. In fact, Gundam was the first anime I experienced that was deeply philosophical and rife with social commentary. The anime, in every way, reflects deeply on humanity’s need for conflict at the detriment of its own survival. Gundam is and always will be an anti-war anime which calls into question our need to hurt others.

Seeing that statue in that single shot of Pacific Rim: Uprising reminded me that even if this movie was highlighting a possible inspiration for the world and characters it is trying to portray, the film severely lacks anything and everything of nuance, philosophy, and subtly. Gundam mecha battled in cities just to reflect on the reckless expansion of the human technology. The jaegers in the Pacific Rim series enter wholescale battles in their cities as if they are characters in an arcade game hoping to rack up points for the amount of destruction they can cause. If Gundam was an Eastern anti-war meditation, then Pacific Rim is the heavy war drum glorifying wanton casualties.

There is another Eastern staple that Pacific Rim: Uprising feels its paying homage to while at the same time flying in the face of its actual motivations. Godzilla is a massively iconic movie monster. First appearing in the 1954 film Godzilla (translated from Goijira, dir. Ishiro Honda), movie audiences marveled at the scale and scope of Honda’s vision. There were already monster movies that featured the large-scale battles on small budget scripts, but Godzilla stood out. Single-handedly, it launched the entire genre into popular culture and sparked rabid fans around the world. In fact, the monsters in the Pacific Rim series share the same name as the kaiju genre they lovingly borrow from (“kaiju” itself meaning strange monster). 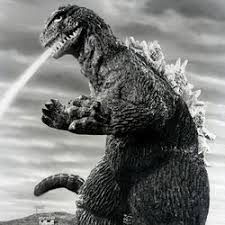 The one and only.

What most people don’t know (and a fact that I fear the writers of Pacific Rim are either oblivious to or choose to ignore) is that Godzilla is allusion to the hydrogen bomb dropped on Japan during WWII. Much of the original ‘54 film blames the horrors of nuclear fallout for the creation of the giant lizard, and namely America for doing so. All throughout the movie, Japan sits as a silent and powerless victim to the terrible nature of this all-powerful creation of science. No manner of weapon– machine guns, cannons, planes– is capable of protecting Japan from its fate. It is not until the end of the movie in which another ungodly creation of science, a weapon that manipulates oxygen, can hope to stop the mighty Godzilla (a possible inference of the arms race the world was set to have).

Aside from naming its monsters after the genre, Pacific Rim completely nixes these details. “Bigger, better, faster” is the name of the game. Humans pilot jaegers. Jaegers punch kaiju. Rinse and repeat. Plot points are connect-the-dot paths from one slobber knocker to the next. There is never a thought about science’s responsibility to keep us in check. There is never a question of  where our military might crosses a line that is impossible to retreat from. Here, science serves as a drive-thru service for better weaponry and more collateral damage.

My issue isn’t with the movie. The first Pacific Rim was pretty damn enjoyable. The second, while having some flaws, is more fun than it should be once the pilots boot up their jaegers. My only concern is when films pick-and-choose what elements they are paying homage to, they completely negate the reasoning for such films to exist. Drawing inspiration from Eastern cinema is beautiful, and this exchange of themes and characters (I believe) can make the world more connected through the creation of one social language. What I think we should be extremely wary of is ignoring the complete story, the complete makeup of its details, when we throw the word “homage” around.

In short, Pacific Rim: Uprising is not Shakespeare, and it never intends to be. When you buy a ticket, your investing in witnessing  missiles galore, monster blood, and mecha purposely dropping buildings on their enemies as a plot point. You get all of these without question. What I suggest for any future installments is to pick a side: you’re either fully acknowledging the work you’re lovingly inspired by or you’re a Michael Bay metallic orgasm of sound and slow motion. You can’t have both.