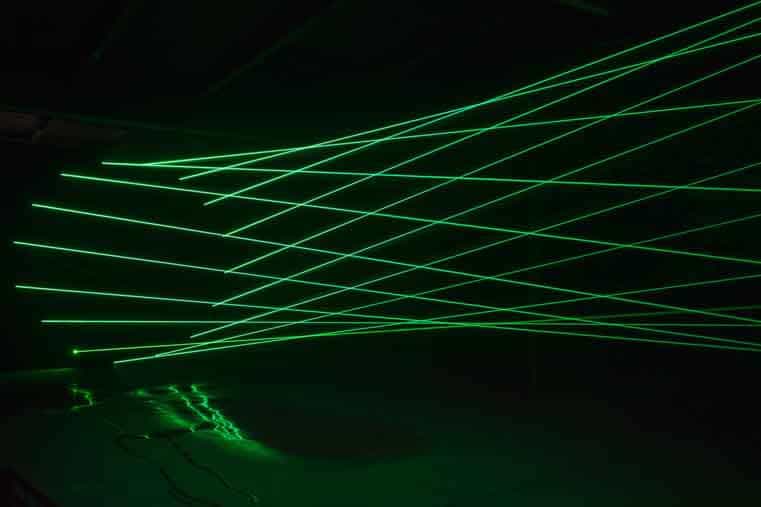 Simultaneous installations in Chelsea this winter warrant our attention and consideration. At D.I.A.:Chelsea a work by Rita McBride and at Gagosian, Douglas Gordon’s environment of projections and video objects. Both are set in darkness which in itself alters the viewer’s consciousness and introduces a subtle effect of entering a semi-conscious state.

Inside 541 West 22nd Street behind a sign that states “Danger…” one finds a cavernous unfinished brick and concrete industrial space. It is adjacent to the beautifully lit white box galleries of D.I.A.:Chelsea where a very intelligent and intriguing retrospective of François Morellet is now on view. A commissioned work, in Particulates Rita McBride has realized a colossal sculpture of 16 green laser lights arrayed in a circular grid that fire through the entire space, at least 100 feet long and easily 40 feet in height. Her inspiration derived from seeing a green neon piece by Dan Flavin that divides the exhibition space and changes where visitors can move, redirecting and defining their paths. 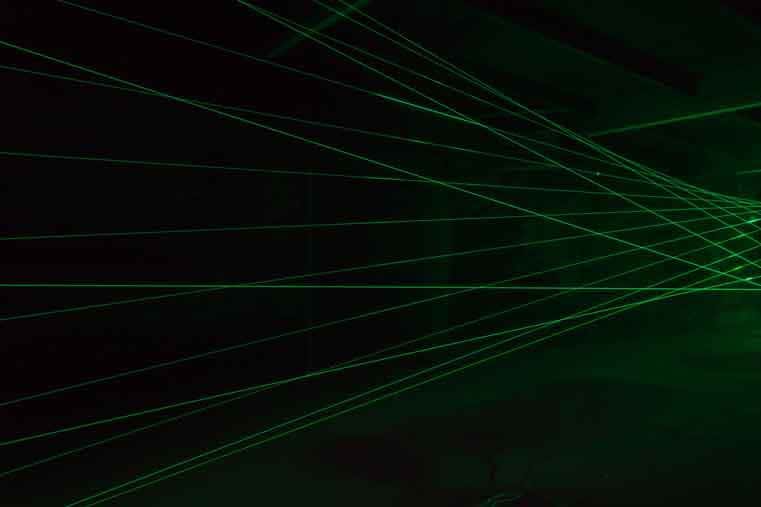 It is rather wonderful to allow the effect of this ethereal and dangerous presence to occur to you in an intense noise filled room that is caused by mist machines that are not visible. The piece is composed of “Lasers, site-specific particulates, extraterrestrial dust and water” and the green lines are animated by the continuous motion of delicate clouds of water molecules creating minute patterns as they fall through the slightly terrifying green lines and form rivulets on the concrete below. The parabolic form becomes entrancing as one moves by it and examines how the lines change. Technological awareness inhabits this horizontal hourglass figure that resembles McBride’s, Mae West[1] a gigantic public sculpture in Munich, Germany. One is prompted to quip that it is a reclining Mae West, an odalisque. 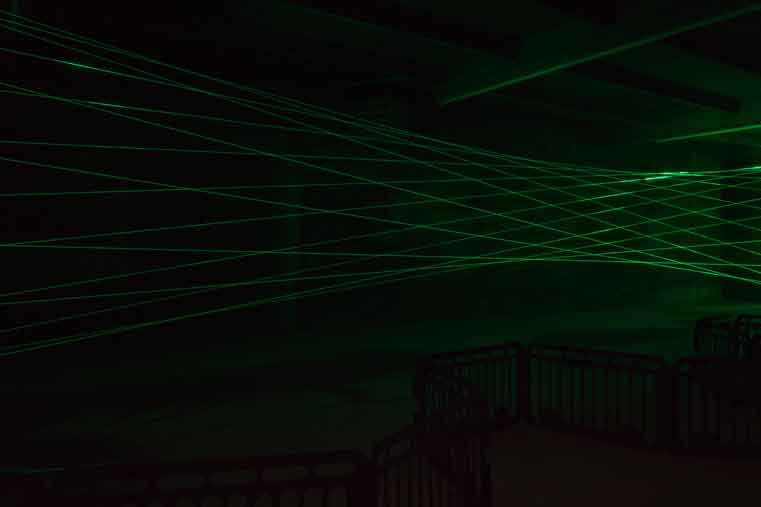 The use of lines of light in air-space to engender sculptural form was pioneered by Anthony McCall whose cool white shapes are also defined by particulate matter in the form of smoke or mist, but McCall’s shapes are meant to be engaged with. McBride invokes extraterrestrial models and scientific postulates like the concept of a wormhole and her installation includes, Guidance (“Barriers”), made of carbon-fiber panels that she designed which resemble templates of fence units. They are arranged along the side of the laser piece in an undulating border to keep visitors at a safe and “lawful distance.”

Design and art are indistinguishable in the work of many creatives and the McBride Guidance (Barriers) feel like advanced design. Similarly, fine art is certainly present in works by designers like the Boyms and Sagmeister & Walsh. At a deeper level in this work is McBride’s intention to launch the viewer’s mental space into physics and prescient science, an approach both Leonardo and Marcel undertook as well.

1 Video interview with the artist containing a film she made in proposing the Mae West project. The five-minute film made by McBride was shown to a commission at a stage of completing Mae West. It has been widely collected, can be seen at about 40 minutes into this video “Public Fiction Lecture Kunstakademie Düsseldorf 2010” https://vimeo.com/15192145

Douglas Gordon’s exhibition, back and forth and forth and back, contains seven cinematic works that are arrayed almost casually but in a subtle placement. The aggregate of works has a retrospective and vintage cast not least because the main piece uses a black and white film made in 1960 by Alfred Hitchcock as its raw material. The exhibition is prefaced with a comment by the artist, “If you want to find the truth in something, take it apart piece by piece, then put it back together with the detail of a forensic scientist. This is a classical way to deconstruct a narrative…”

One enters the darkened space down a long corridor at the end of which is a large yellow eye of a black cat, One Night Without Light. This is one of three pieces made with sound which is a subtle element in the environment. The atmosphere is markedly tense with the silent central work, 24 Hour Psycho Back and Forth and To and Fro (2008) playing in the main space, and in the corner at the far end, one hears the raucous sound of crows speaking. Having a comfortable feeling of almost careless placement, Looking down with his black black eye, Ee, 2008[1] is a pyramid of three generically boxed flat monitors showing crows filmed by the artist in Avignon, France. 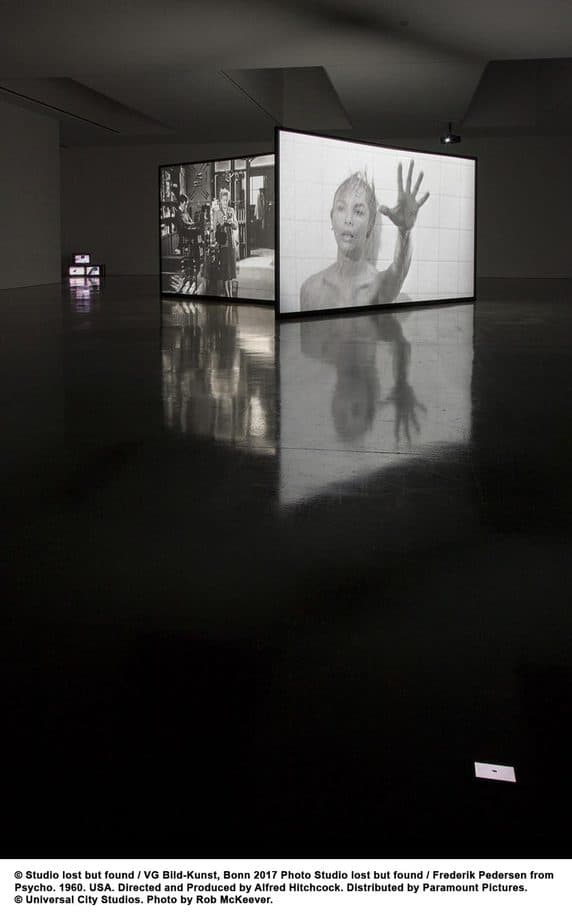 The quality of Gordon’s cinematic images is noticeable, their sharpness and the range of blacks to color in the pieces that use monitors.  The central work, 24 Hour Psycho Back and Forth and To and Fro (2008), in black and white is projected so that it seems to just float on the two screens abutted rather than aligned and shown in reverse on each side. In 1993 Gordon first deconstructed the film Psycho by Hitchcock so that it lasted for 24 hours. This later work on two screens is charged with a hypnotic effect, where one screen begins at the beginning of the film, the other plays in reverse from the end, each advancing in opposite temporal directions. In classic film celluloid negatives and prints have the quality of reversibility, that plays between forward and backward.  The fact that film is a transparent medium, there is a back the emulsion side and a front and the title of this exhibition may reference this kind of awareness. The way the projections almost float in the dark space on large scale 4:3 ratio screens nicely abutted, provides the gratifying sensation as one moves around and near the piece, that the planes of imagery are sliding.

A tiny screen with a life-sized fly in it is across from the main piece’s large screens; it looks like a smartphone on the ground. Titled B-Movie this is similar to a piece showing a fly that is in the collection of the National Gallery in Great Britain titled, Film Noir.[2] So many associations buzz around the fly as a subject; Ono/Lennon’s 16mm film, and the classic idea of death and decay, it is a momento mori.

In a room at the end of the long corridor, to the right of the main space one sees close up a hairy hand and finger gesturing to approach. Titled Scratch Hither, it is at the top of two monitors that face in opposite directions. Facing away from the entrance and beneath is Don’t think about it, and each film is a loop 34 minutes and some seconds long.  To their right and facing the viewer as they enter are two monitors side by side and rotated slightly showing what look like large orange fruits floating on a dark blue water, which are in fact human skulls. Titled Video Diptych, this work raises awareness of the fact of synchronicity in Gordon’s work; that these pieces will loop with a changing rate of correspondence between the images over time. Gordon’s work with monitors places the importance on the image by subtly housing them in generic black boxes and one of the pleasures of this work is the seeming absence of technology when in fact simple effects are achieved through sophisticated means.

Gordon is referred to as “a conjurer of collective memory and perceptual surprise” both strategies worthy and well realized in this show. The Gagosian gallery held a 24-hour screening at the 21st Street space from November 17, starting at 10 am and finishing on November 18 at 10 am which for some visitors, who would enjoy the mild campiness of the Hitchcock classic and the jarring reality of Gordon’s reinvention, might have been a rather jovial occasion.