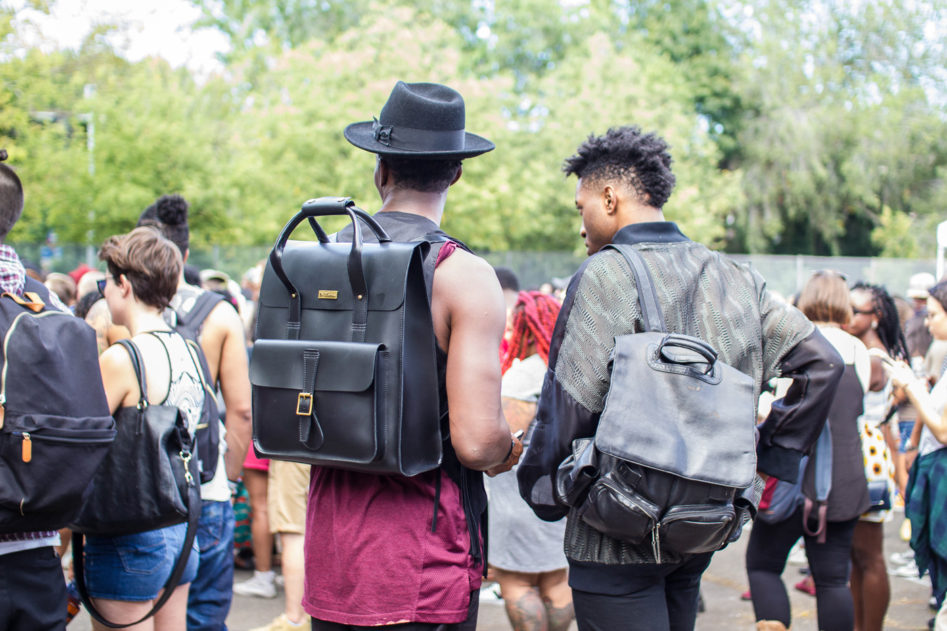 On the second and final day of the Afropunk Festival, the sun over Brooklyn was at full power. Upon my arrival I was able to catch the last few songs of The Tontons, a sea-breeze psych-pop group from Texas. Their new album, Make Out King and Other Stories of Love came out in February. 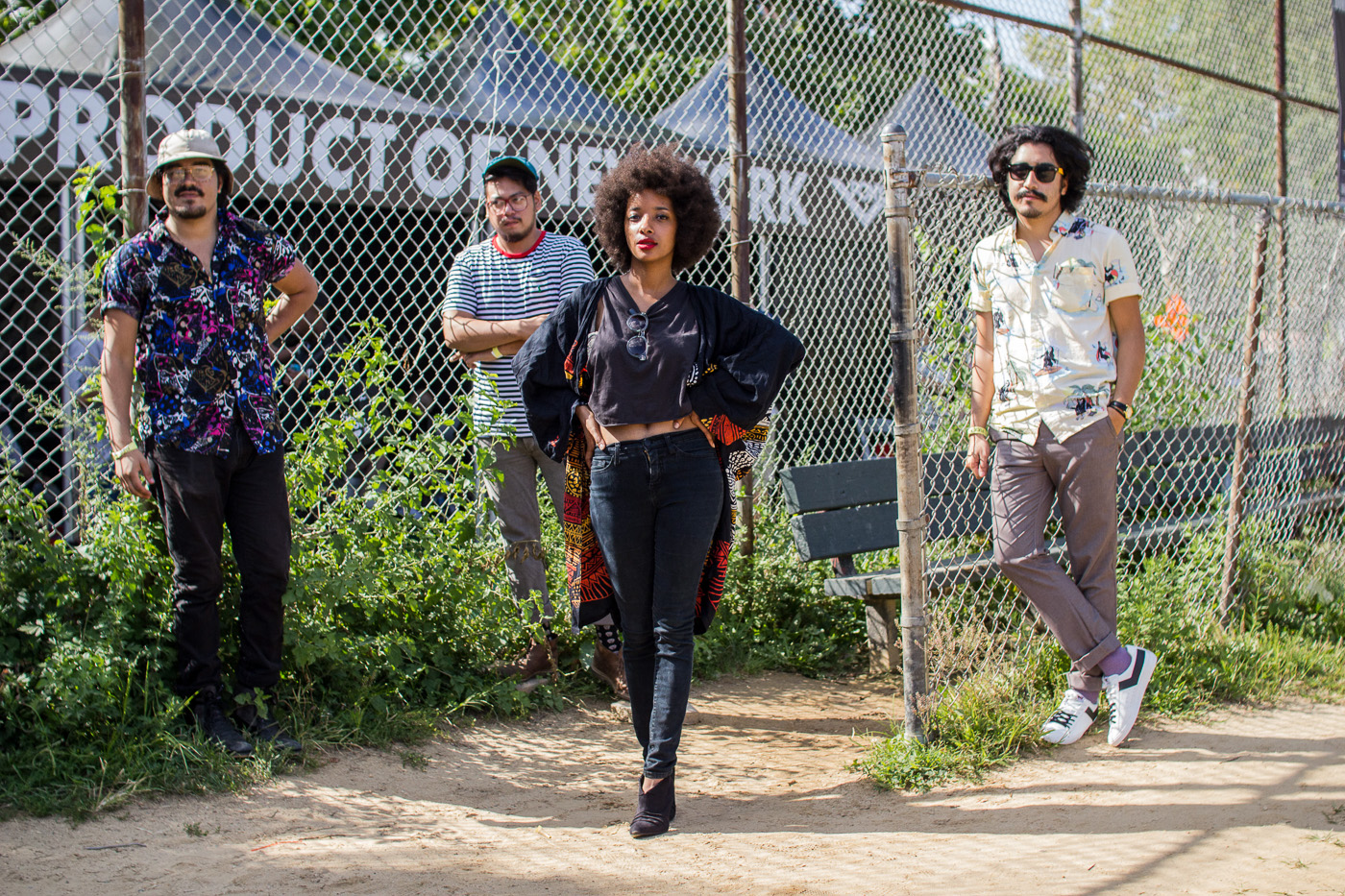 Before their final song, singer Asli Omar remarked that “Afropunk is the prettiest festival we’ve ever played.” She’s right. America’s mainstream festivals (and I’ve been to most of them) do not compare to Afropunk. The crowd was full of energy, creativity, respect and an all-consuming lust for life. More than anything, everyone there had a unique sense of self. Everyone had their own bold style, mixing and matching prints, clashing colors, and bodies adorned with all sorts of jewelry and head pieces. It felt rewarding to be among a large group of confident individualists. The social atmosphere was refreshing.

After gawking at the beautiful bodies awhile, I straightened up and walked over to the Red Stage. 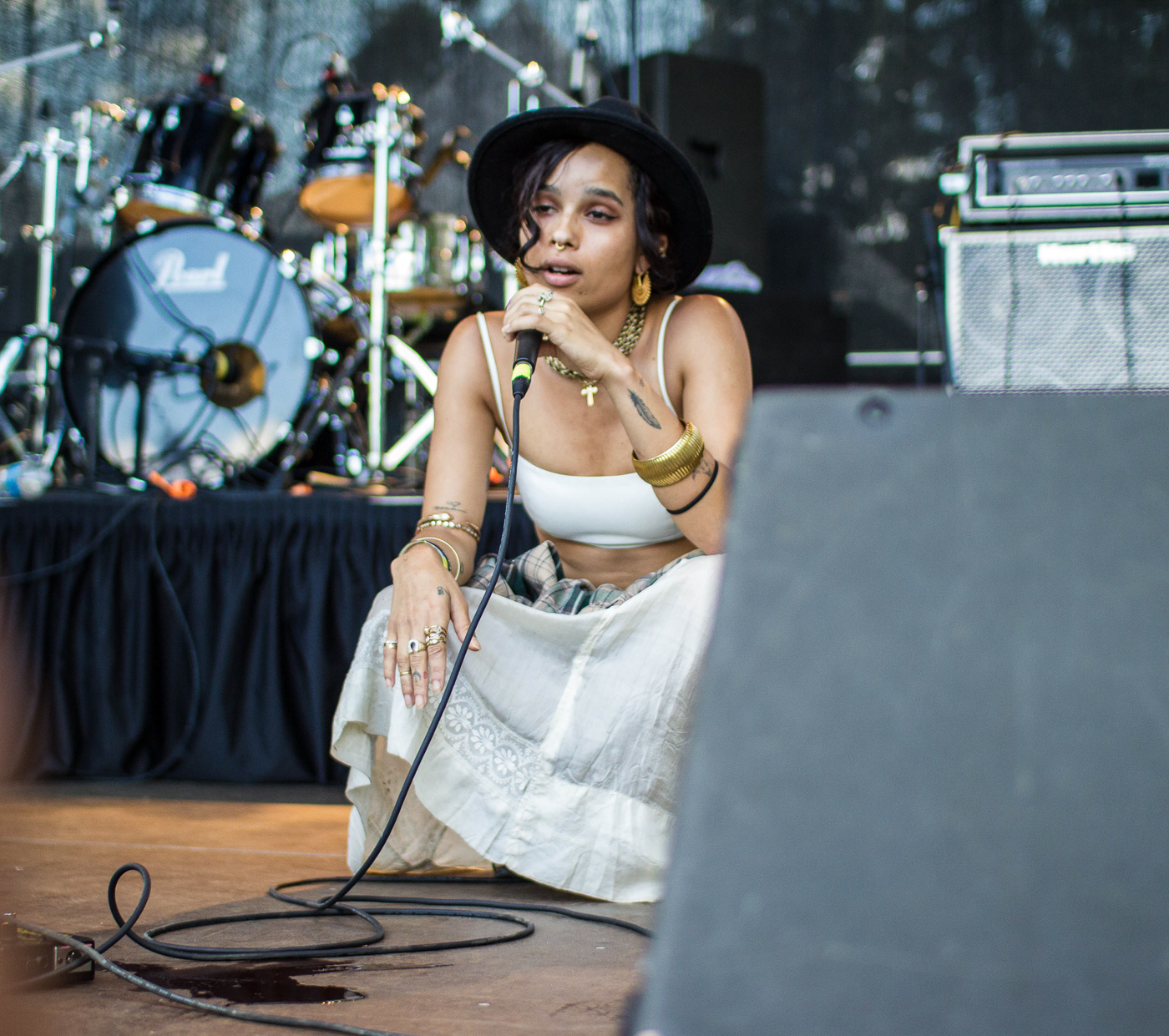 I could hear the deep electronic booms of Lolawolf as I approached the stage. As I got closer, the reverberations dissipated and I could see and hear the lovely Zoë Kravitz. Her voice floated off the heavy beats like steam. She sauntered about the stage, smoking a cigarette and wishing for the sun to back the hell up. 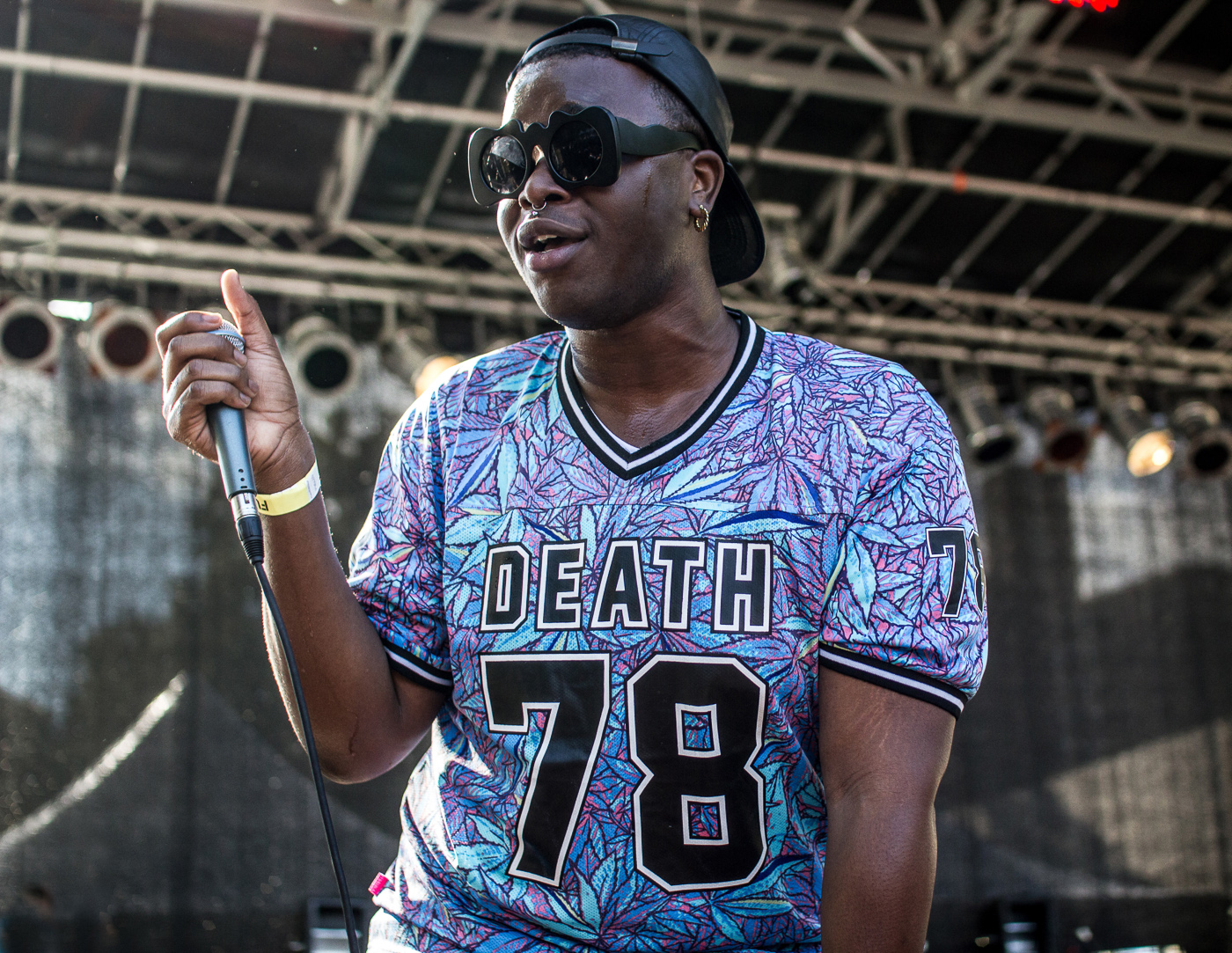 While standing in wait for Cakes Da Killa, a group of dancers taught the audience how to do the catwalk, the duckwalk and other moves while Mikeq spun. Cakes Da Killa lumbered onto the stage wearing a football jersey with a lavender and fuchsia flower print and DEATH 78 printed in white text. The performance felt like a sporting event, minus the pads and pom poms. Despite the thick heat, Cakes chewed up the stage like a stick of Wintergreen chewing gum. It was some no-nonsense through-the-ceiling cunt shit.

On either side of Cakes, two flexible dancers shook booty and limbs. Dressed in all white there was a pair of guys and a pair of girls who switched places every few songs. They synchronized a few moves with Cakes, but he mostly ran rampant on the stage, grabbing a handful of ass from a male dancer with great exaltation.

Cakes was a force. He spit and sweated, blew kisses, hopped from speaker to speaker and jumped to the railing to engage with the mob. On “Truth Tella” from Hunger Pangs, released on Mishka NYC at the top of the summer, he sounded confidently deranged.

The final song was “I Run This Club.” Before the song began the Brooklyn United marching band wormed through the crowd. I couldn’t tell if it was a spontaneous occurrence or not, but as the song began, the marching band added quick shots of horn into the chorus. Whether it was planned or not, it went along perfectly. Cakes finished and the marching band continued to weave toward the Green Stage.

By the time SZA graced the stage I was off to the side barricaded by the constant flow of bodies. She seemed to have a steady command over everyone with her lush voice and cool-to-the-touch beats. Listening to her EPs, S and Z, later on I regret not being in a better position. 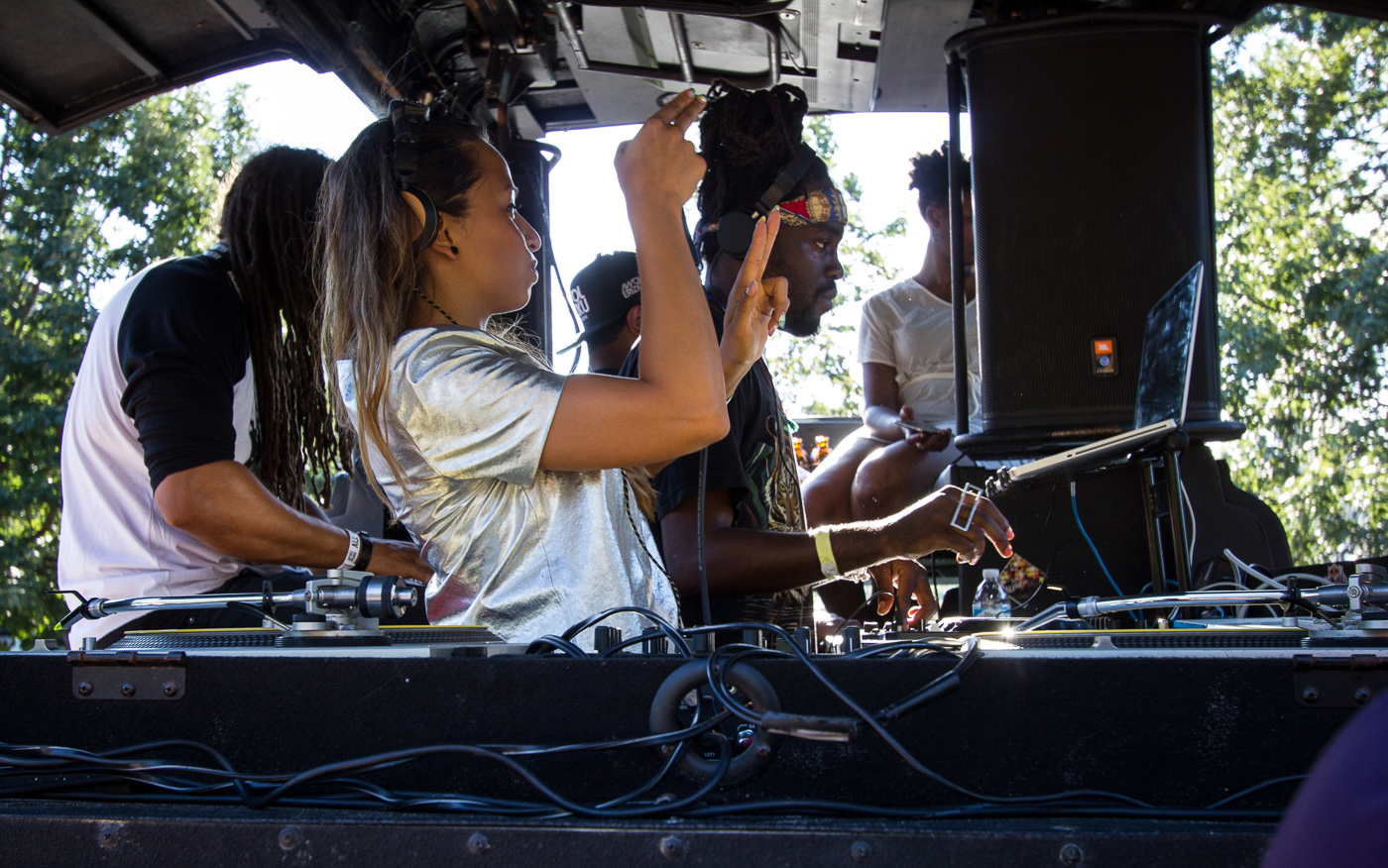 If you had time to kill between acts, there was no shortage of things to do. Beyond the stage area was an area designated for lounging, snacking, dancing and general partying. Food trucks lined the grassy courtyard and clusters of humans relaxed and rehydrated in the sun.

At the edge of the grassy area, a giant black military-grade Red Bull truck housed alternating DJs. Dubbed the “House Of Marley,” its sole purpose was to keep the crowds in a continuous state of movement. I got there for the last half of Jasmine Solano and Melo-X. A 10X10 wooden block of speakers bookended the truck. Each speaker bounced like jelly with every bass boom and flipped everyone’s dancing feet to automatic.

In addition to the House of Marley, there was a whole merchandise area with a wide selection of homemade clothing, jewelry, literature and other knick-knacks. Pony was giving away pairs of shoes. Between the Red and Black stages, BMX bikers swooped up and down the curvature of two half-pipes. Most people were driven to the fest for the music, but there was plenty more than that to occupy the mind. 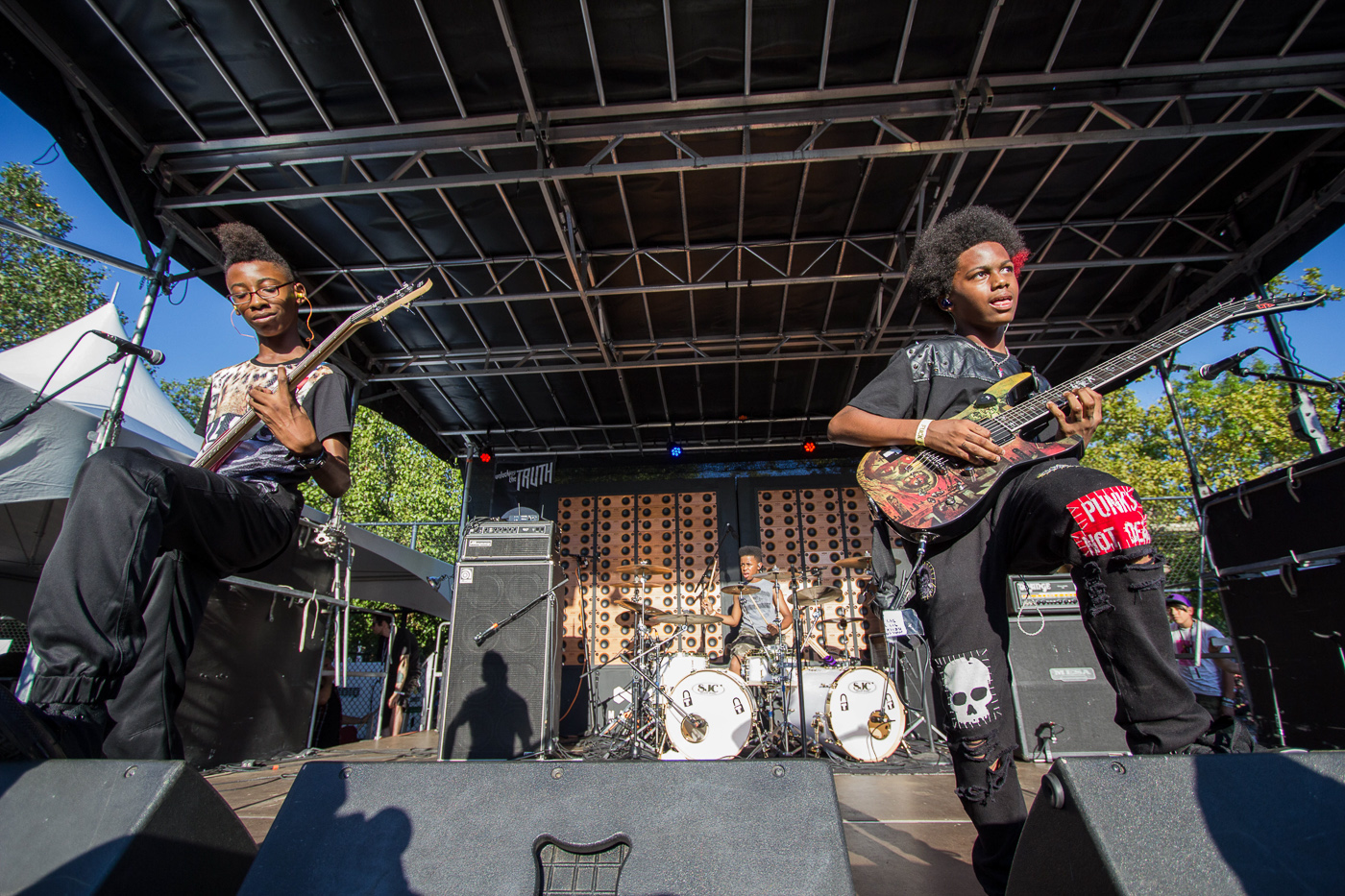 When you were thirteen-years-old, sitting in your room ripping through Metallica and Led Zeppelin riffs, you never could have imagined a mosh pit opening up before you like the guys in Unlocking the Truth can. The trio of barely-teens has had a shocking rise to recognition over the last year, after having been discovered in Times Square and consequently getting signed to a major two-album deal with Sony.

They proved their worth with a classic combination of a pure metal with elements of speed, thrash, punk and hardcore. Their riffs are dark and foreboding like Black Sabbath, but jacked with energy. The songs twist and turn like the tightly wound DNA double helix of heavy metal.

Singer Malcolm Brickhouse understood the power and importance of showmanship. He egged on the crowd, cursed the sunlight, and didn’t smile. Unlocking the Truth is definitely no novelty act, no gimmick; they’re just some young minds who have tapped into the spirit of heavy metal and know how to harness it. Fly free younguns.

For the final two performers of the festival everything slowed down to a time-displacing space crawl. Meshell Ndegeocello started at the strike of 7:00 p.m. with a performance as brisk as the late summer air.

I only recognized Ndegeocello from the early 90s, hailing a cab with John Mellencamp in their video for “Wild Night,” but she showed me the true depth of her sound. The music was soothing and tranquil with an under-bubble of funk at every turn. The anxiety in my head came to a complete still and Ndegeocello’s voice nursed my nerves.

She performed songs from her newest album, Comet, Come To Me and other classics. She preached for peace pausing to offer words of wisdom. “Be kind to your children,” she said.

Then, the night came to a standstill. Everyone packed in before the Green Stage waiting for D’Angelo.

Our anticipation rose and fell. D’Angelo kept the crowd waiting and anxious until Brooklyn Borough President Eric Adams came out and promised a night of great music with some surprises. More than an hour after the scheduled start time, every light finally dimmed.

Moving in the darkness was the figure of a tall man with a large round head, who sat down at the drumset. It was none other than Questlove, the backbone to The Roots and driving force behind D’Angelo’s breakthrough album Voodoo. Alone on the stage, recognizable only by his iconic outline, he jumped into a simple beat that evolved into a full-on drum solo. Whether it was a stalling tactic or not was of little relevance.

Soon after, Captain Kirk Douglas, guitarist for The Roots, joined in, bending the strings of his guitar. Mark Kelly, bassist for The Roots, and the rest of the band filled the stage and finally, it was set for the man of the evening.

Casually D’Angelo stepped up, gave a wave and sat at the bench of his piano. From there no time was wasted. The set came in a flash. The band played all covers: “Burnin’ and Lootin’” by Bob Marley; “No Head No Backstage Pass” from Funkadelic; Prince’s “She’s Always In My Hair” and others. Each song was completely unrecognizable from its origins; each one was dipped in the glittering sweat of D’Angelo.

Angelo Moore, from Fishbone (who played earlier in the day), came out for a rendition of his band’s “Black Flowers.” The mood was deep blue as the sleepy sounds of an organ rose into the hard charging chorus. D’Angelo gave an empowering performance, at one point leading a call-and-response of “Hands Up. Don’t Shoot.” with the crowd.

The set ended with the Prince cover. The stage was bathed in purple light. But right when it felt like the show might go even one step further, it was suddenly over. The musicians filed offstage into the shadows of Brooklyn and Afropunk 2014 had found its conclusion.

Artist I’ve Listened to Most Since: SZA

Star of the Evening: D’Angelo