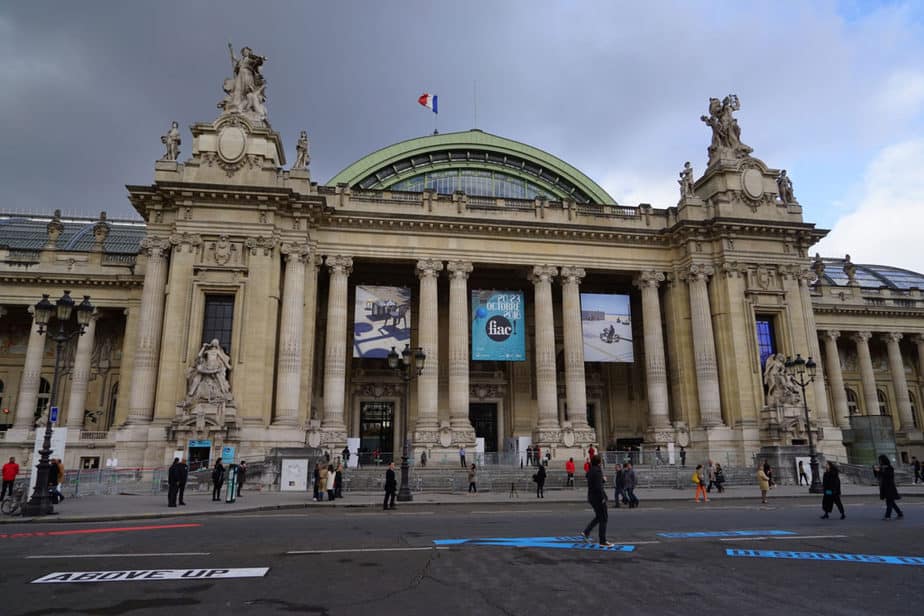 This has not been the best year for France. From terrorism to brexit, the republic’s confidence is shaken. Add increased global competition in the art world and there is ample reason for panic. The Foire Internationale d’Art Contemporain (FIAC) attempts to buck these trends. With 186 galleries exhibiting, this is definitely the biggest FIAC ever, but is it the best and can it keep up? 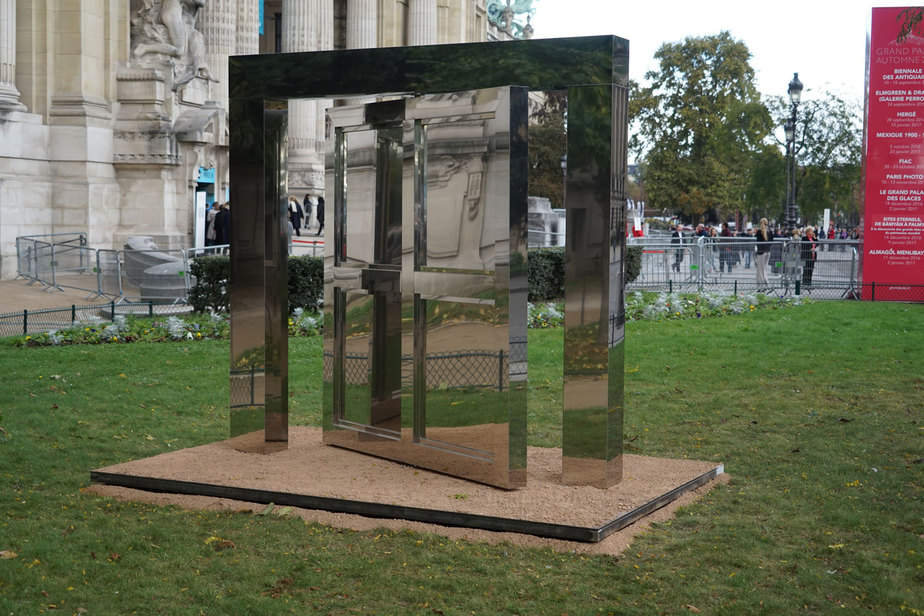 The larger scope is visible before one even enters the fair. This year the city of Paris gave FIAC permission to use Avenue Winston Churchill, which runs in front of the Grand Palais venue, as an outdoor sculpture garden and pedestrian space. Stefan Brüggemann’s 2016 Out Door, exhibited by the Parra & Romero Gallery, grabbed viewer’s attention. The swinging two sided door in chromed stainless steel caught the little light offered by the grey Paris sky, welcoming visitors. Eloy Molanes of the Madrid based gallery says “the piece is really magnetic” and has attracted a lot of attention to their booth. Despite the prominence of the sculpture park in FIAC press materials, it was in fact hard to find. One gallerist, having a coffee next to Brüggemann’s sculpture, failed to notice it. Out Door remained unsold in the afternoon of the fair’s second day. 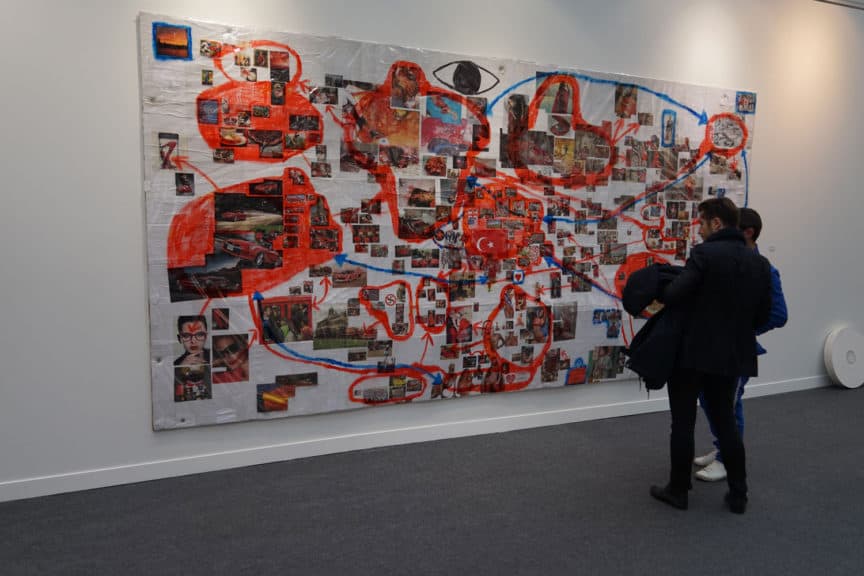 The heart of the action is on the Grand Palais ground floor. Entering the venue, the first piece visible is Swiss artist Thomas Hirschhorn’s 2008 The Eye-Map I (What the eye sees in red). Using cardboard, paper, prints, photocopies, tape, felt, and plastic sheet, Hirschhorn maps and connects social and political trends in the early 21st century. The work is almost 10 years old, but its engaging Marxist discourse is timeless. A representative of the gallery behind the piece says the decision to place it front and center is meant to be provocative. Despite the provocation, FIAC has been “more quiet than other years” for the Gallery but sales have been “good”. 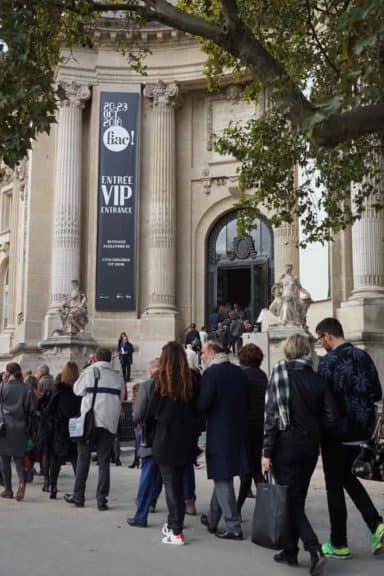 “Good” was used as an adjective again at Van De Weghe Fine Art’s booth in the center of the fair. New York based Gallery owner
Christophe Van De Weghe says the fair so far has been “good, they have been busy and have had sales.” It is hard to imagine the gallery having too hard of a time with its diverse selection of 20th century art, including pieces by Jean-Michel Basquiat and Andy Warhol. Sales highlights from the booth include 2.3 million dollars for a Rudolf Stingel and 450 thousand dollars for a Picasso.

Young and diverse galleries dominate the upper floor. At Sao Paolo’s Mendes Wood DM’s corner booth, a young gallerist quietly sat reading his iPhone. He had a good reason to be calm, the gallery’s solo show of Paulo Nimes Pjota’s work sold out in the first hour of the preview day. The gallery says they succeed by finding exciting artists who have not shown outside of Brazil. According to the gallery, it is necessary for Brazilian dealers to export vibrant work abroad because of a less than vibrant economy at home. Paris and FIAC, for them, is an essential stop.
Berlin’s Peres Projects presents another attention grabbing booth on the upper floor featuring pieces from Mark Flood, Blair Thurman, Donna Huanca, Dan Attoe, and Melike Kara. Mark Flood’s floor collage installation of Justin Bieber related magazine clippings was a crowd favorite. Nick Koenigsknecht, of Peres Projects, says the fair has been going well. He added that this FIAC they moved booth locations, making comparisons to previous years difficult. 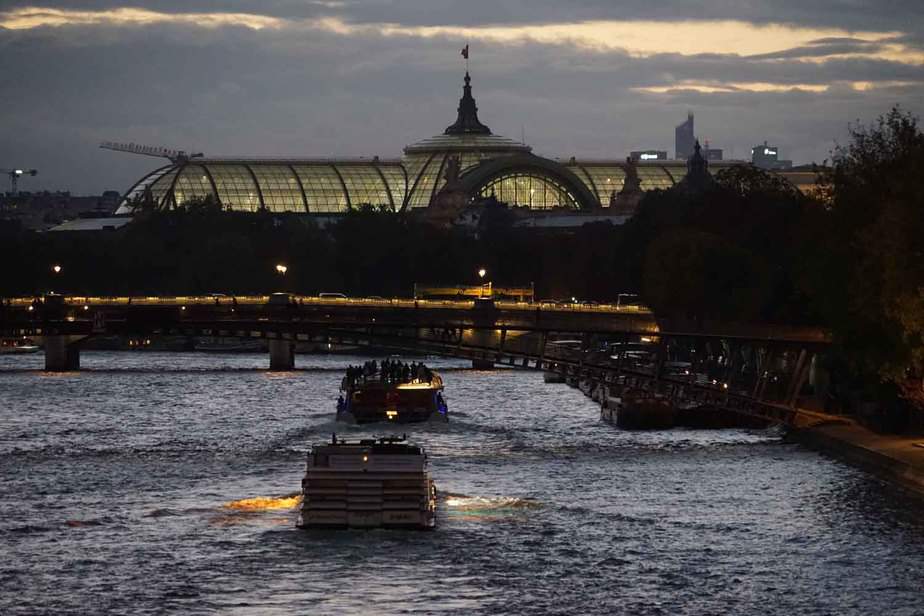 Comparisons are indeed difficult, especially when trying to understand art fairs. Are they best seen as commercial markets or cultural venues? If the former, with a .5% increase in attendance and some high value sales, this year’s fair holds its own. If the latter, then FIAC is certainly one of the best. Artist Thierry Geoffroy said unprompted that you see the same galleries at every fair, “But they bring different stuff to Paris.” Gagosian Gallery thought this year would be a gamble, but in the end were happy with the pace of business and the quality of presentations. 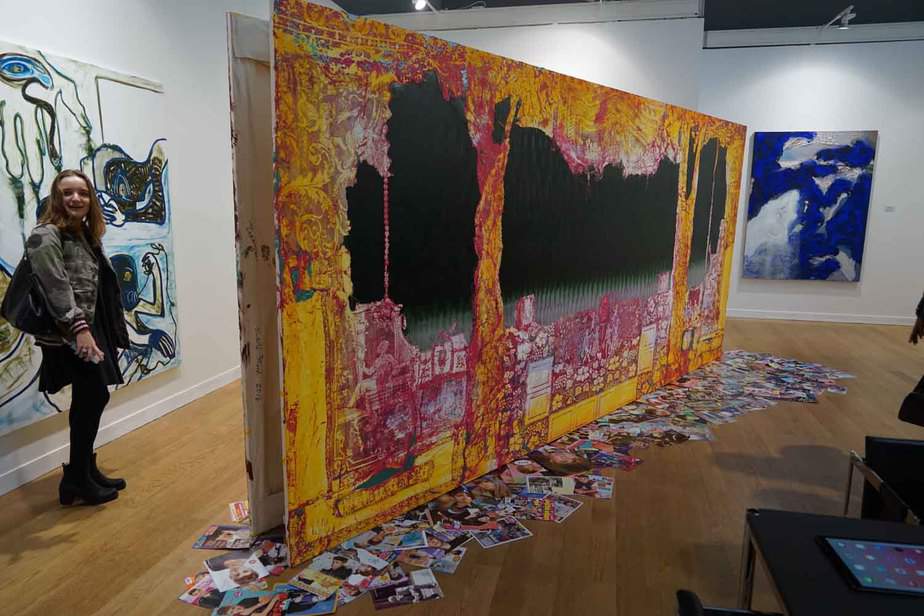 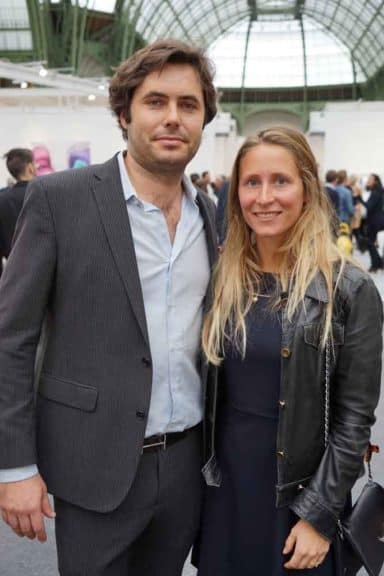 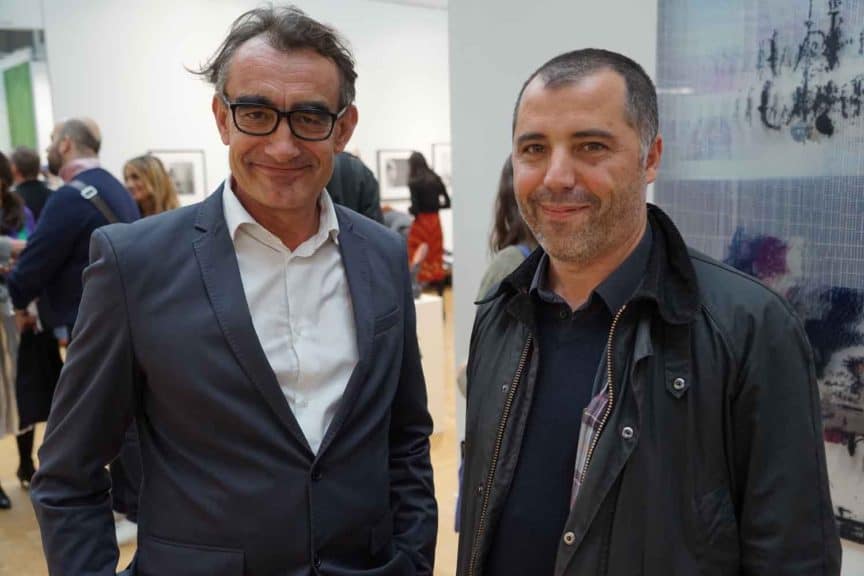 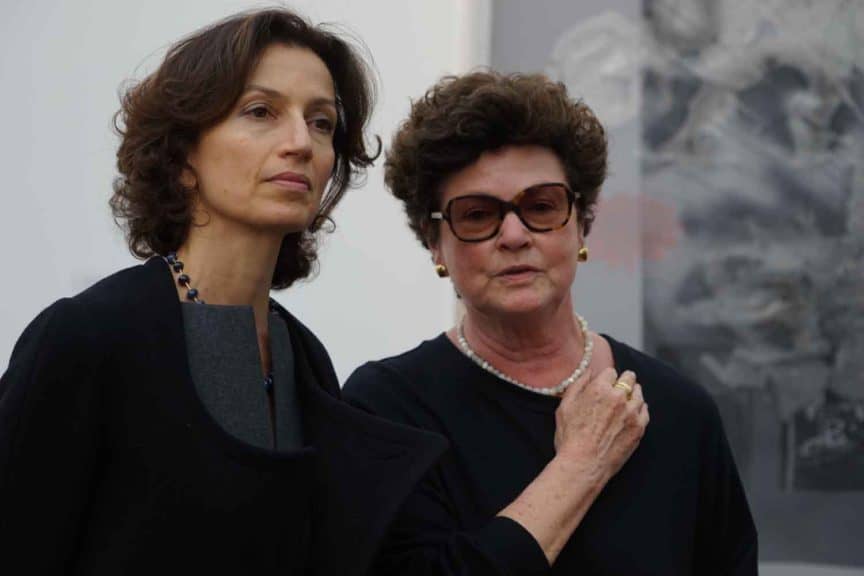 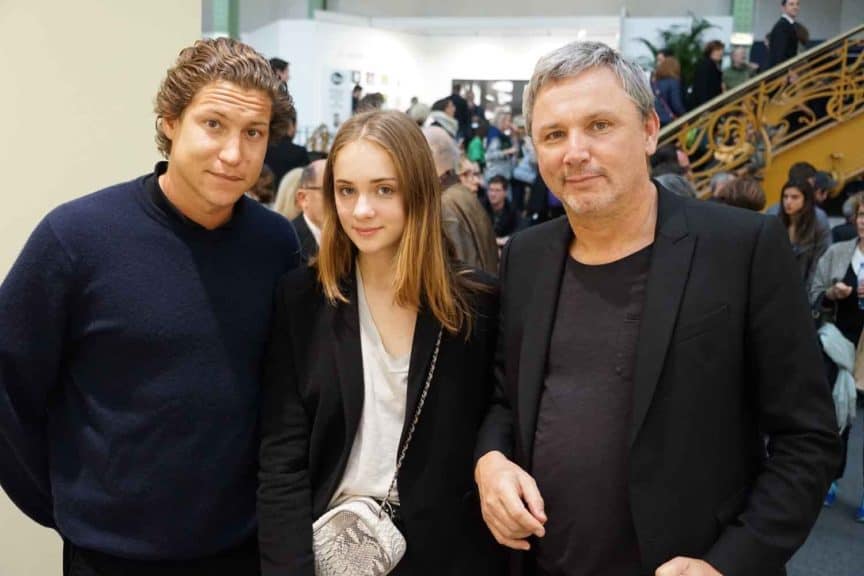 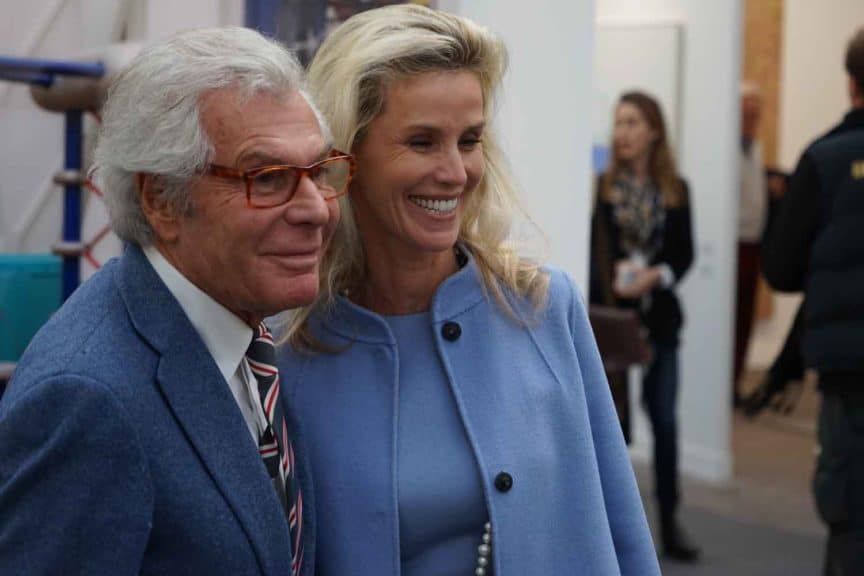 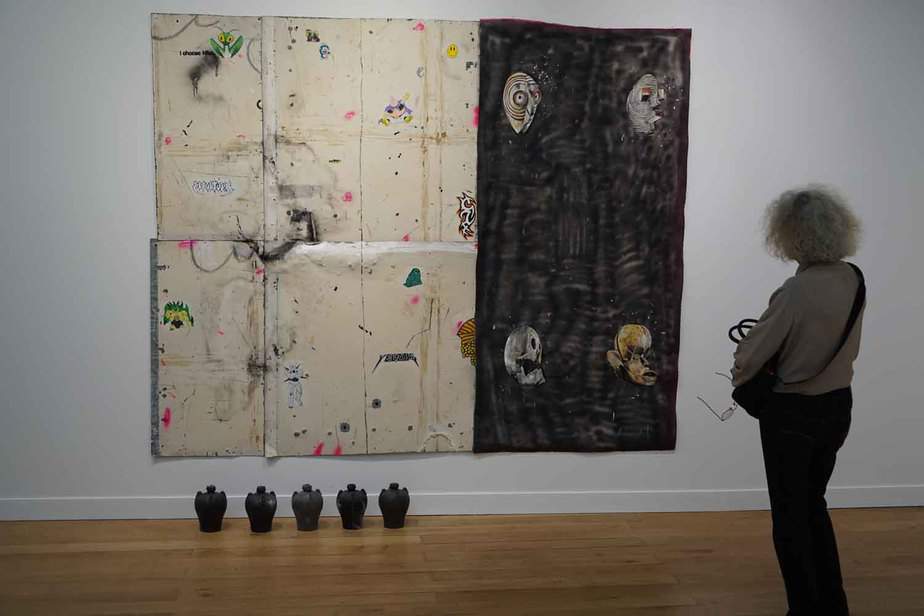