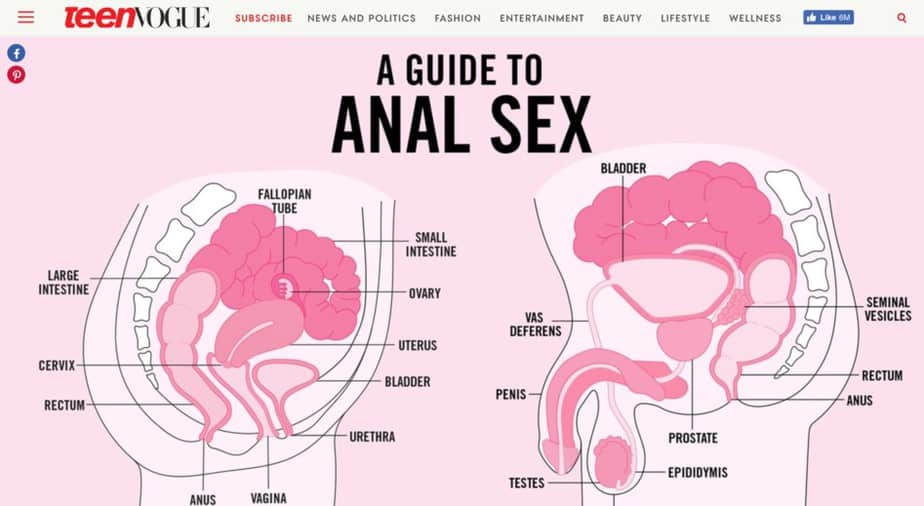 In all honesty, when I first read the article there was an initial “whoa” factor. I’m 31 years-old and although I grew up with the internet, I never truly had access to that kind of information. There was the occasional sex-ed class and safe sex demonstrations, but I learned more about sex from first hand experiences, the internet and other teens as oppose to any educational institution, publication or adult. I was kind of surprised when I saw the article in Teen Vogue but then I quickly breathed a sigh a relief because the writer, Gigi Engle, was attempting to educate an age group that can use all the education it can get.

Then the subsequent question would be: then who?

The Internet is a well of information, an unrivaled source in which flock to explore whatever our hearts and minds desire. How do you wrap a sprained ankle? Was Betty White Liberace’s beard? Did Gandhi hate black people? How long does it take for acid to dissolve an entire adult human body? You can find all the answers you ever wanted on the Internet.

But while the Internet is a free flowing oasis of who, what, when, how and why, it also hosts content that some audiences may not be ready for, especially if they aren’t “of age.” Nonetheless, preteens and teens have access to all types of content, both age appropriate and non-age appropriate—which means “the birds and the bees” conversation isn’t quite what it used to be. That being considered, it would be foolish to think that kids between the ages of eleven and nineteen have not already heard about the practice of anal sex, much less witnessed it being performed on camera via some pornography site.

An individual doesn’t even have to log onto the Internet to actually be logged onto the Internet. We are living in a digital age and not even the Amish are safe from its clutches of convenience. That means, no matter how much you try to protect your child from the outside world, the outside world will eventually find a way in. For parents, delusion will only lead to confusion and when they finally come to their senses, their children will already have a 401K.

These numbers show that teens aren’t running around boinking everything that moves and are far more coherent about sex than we assume. The numbers also show that teens are putting their hearts and minds into these decisions. Why not help and guide them in that regards? Why are we trying to preserve them in some kind of unnecessary, ineffective amber of innocence when research is showing otherwise? This way of parenting is archaic and myopic. It is also rooted in homophobia bearing with it the sour fruit of stinging Christian-like rhetoric.

Like it or not, more and more teens are choosing to live in their own truth and embrace their non-cisnormative sexuality. Instead of avoiding the dialogue or shunning the idea of being gay entirely, we should be there to ensure that they are embracing that lifestyle in a healthy manner. In a post-Will & Grace America, we should be far more comfortable with the LGBTQ community. It seems like we are tolerant when they are the comedic foil, stereotypically lisping and sassing their way through scripted punchlines; but as soon as it is time to regard them as fellow human beings who require attention and care—all hell breaks loose and the “gay agenda” is running rampant, trampling the very concept of Americana as we know it. Young gay males do not even have that many places where they can honestly discuss or consult when it comes to their sexuality.

More importantly, this is a matter of sexual hygiene and health. Whether a person is gay or straight, anal sex has its health risks—the same as “normal” sex—and it is our duty to help them protect themselves. I am not a parent, but my mother discussed sexual issues openly with me because she wanted me to be prepared enough to make safe decisions and protect myself. She knew that when I left the house and stepped out into the world that she couldn’t be there hold my hand for every decision. Parents cannot let delusion and/or underlying homophobia, keep them from being the best parent they can be.

What do you think?