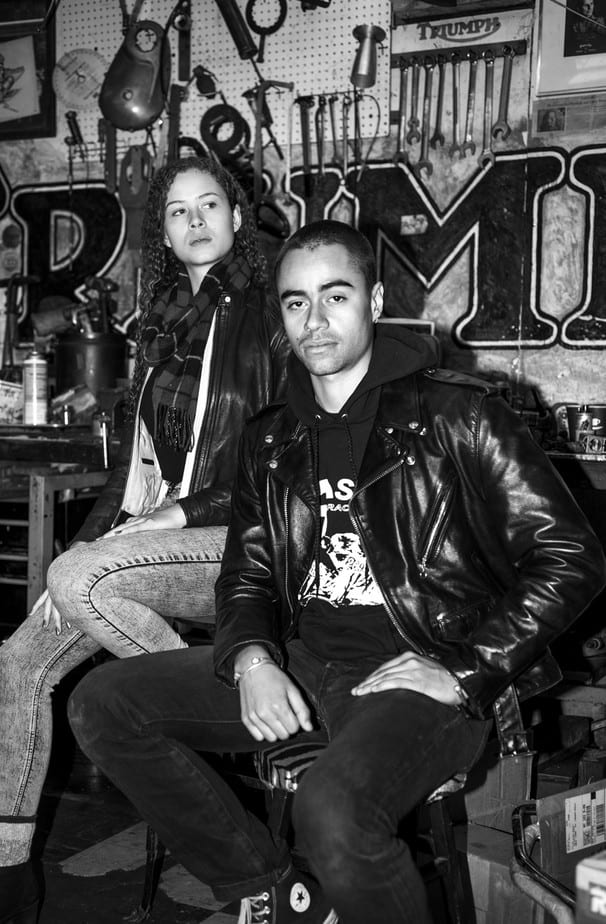 For our fourth bi-weekly we head over to Alphabet City (Loisaida) and interview Keith Dragon Mackie and his sister Tiger Ray Mackie. Both are visual artists. Keith is a painter and graphic artist who uses his memories, humor and public observations to create inside jokes that play out as a larger commentary with strong ties to current social issues. Tiger is a classically inspired painter who juxtaposes woman of color with visual cues indicative of contemporary culture.

J+A: Hi Keith, it’s great to see you and your sister, Tiger again. We both are really digging some of the work you have been coming up with. So you just came back from studying for your masters abroad in Scotland. Can you tell us a little bit about that experience and how you feel the education system compares to higher education in NYC and the US as a whole?

Keith: My time in Scotland was pretty inspiring and there is definitely a different way of thinking than here in the US. When approaching applying to my master’s degree I essentially had two options: stay here and become burdened by an immense amount of debt due to the increasing cost of higher education —or— take a shot at applying for school in the UK. I have family in Scotland so I saw it as a viable path to achieve my plans. School in Scotland and most of the UK is provided tuition-free. That point really assured my decision to study at Glasgow University for the Arts. So to answer this question: in many ways yes. It is becoming difficult for a working artist to afford a certain class of education within the USA. I experienced this first hand while attending BARD for undergraduate studies. 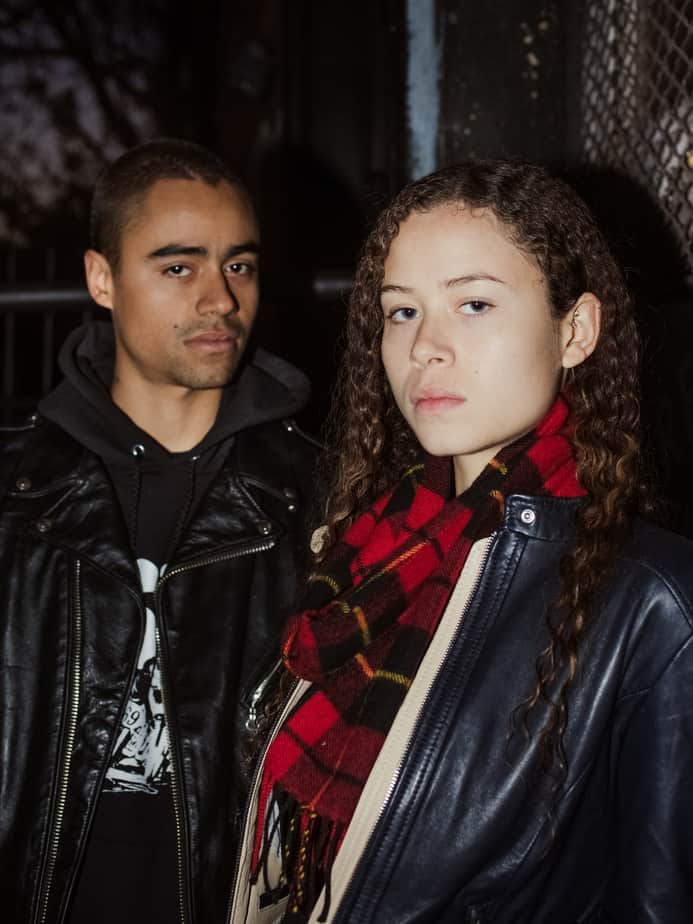 J+A: This seems to be a common thread throughout artists navigating the system here in the US. Unfortunately, it seems things are going to be more difficult with this current administration and the appointment of Betsy Devos as Education Secretary (Devos is an avid champion of voucher programs for students from lower/middle-income families. Voucher programs encourage students to forgo public grade school education in exchange for a loan to pursue grade school education in private institutions. Studies prove that they have a disparaging success rate) But moving forward I see your sister Tiger Ray Mackie is also pursuing the arts. Can you both tell us what has been inspiring you recently? Or how do you see yourselves as artists in our current media driven society?

Keith: Being an artist is definitely a struggle. Being from the L.E.S originally, I would say that there has been a major shift in our community and it is becoming rare to be a born and raised New Yorker and still living here. This takes the notion of the struggling artist to a new level as most of our neighborhood becomes more and more gentrified, and many families who have resided here for a while are being evicted. In regards to my art, I tend to see myself as a harlequin of sorts amongst my peers and friends. A bit of a jester of art. I enjoy challenging the perspective of certain social issues, playing with them. So if I could say anything that’s really inspiring me it would be the role I play while creating my work. It drives my work ethic. 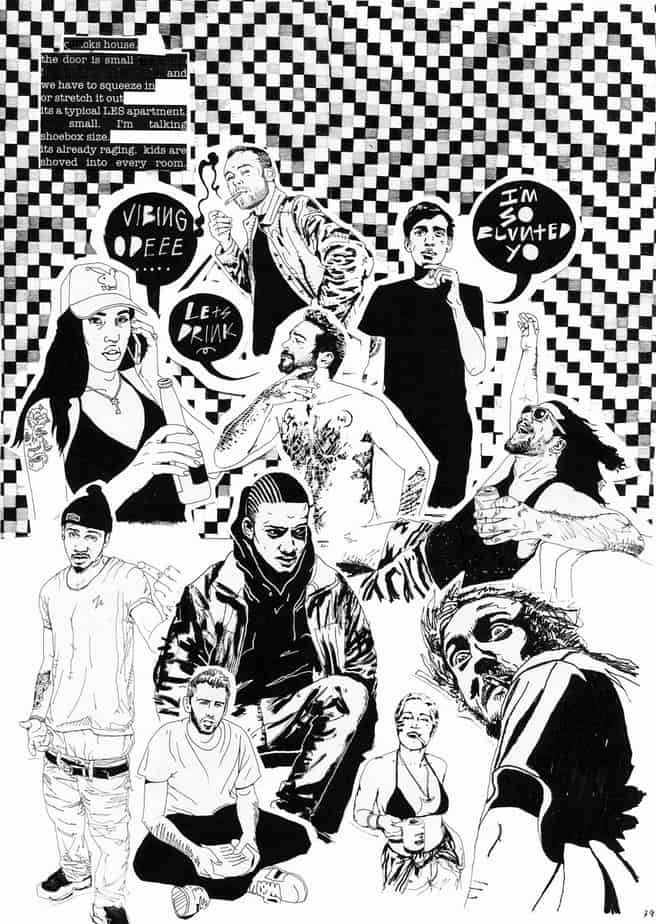 Tiger: Yea, I would say myself and Keith are a bit of opposite within our practice. When I am approaching a new project or even within my project I tend to try to embrace the positive sides of social issues and then amplify that with my perspective of those events. But in short, I see both perspectives as entirely valid. As for being an artist in these times, just getting exposure as a young artist is an immense feat alone. Continually applying for shows and grants is pretty draining. There is an incredible amount of competition, even within my own friend group. Which can make you drive yourself harder in your art but overall it creates many challenges.

J+A: It can be quite an uphill battle. So Keith/Tiger both of you were born and raised in the L.E.S aside from your time abroad, Keith. You both have lived here for the majority of your life. How do you both feel the East Village or Alphabet City has changed? And, if you had the option to move would you?

Keith: Our parents were heavily involved in the art/music scene here in the East Village since the early 80’s. They decided to stick around and raise us both here like good ole’ East Village kids. We want to stay here but it is becoming increasingly difficult for us to afford the rent. Even with being here for as long as we have. If we can I don’t see any reason why we would want to move, at least within NYC. 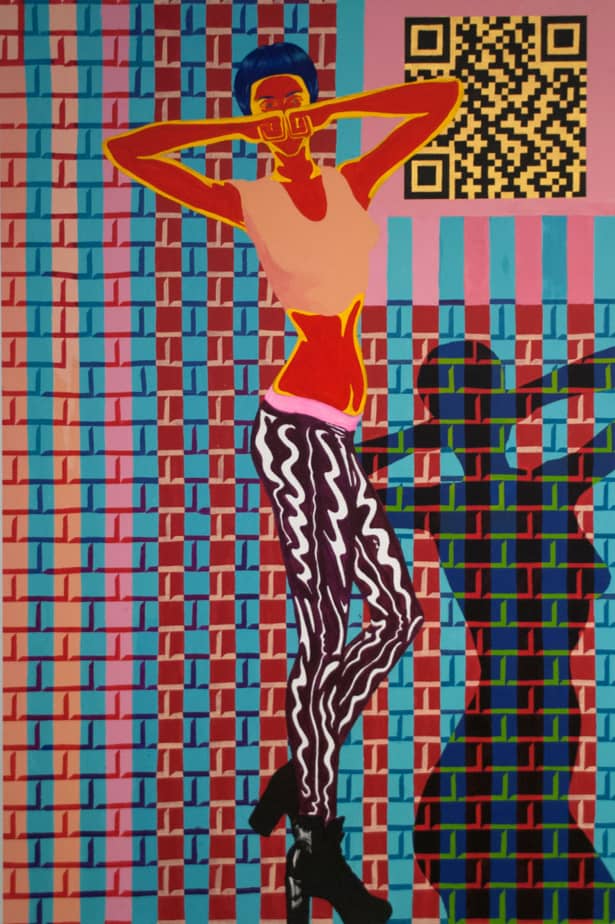 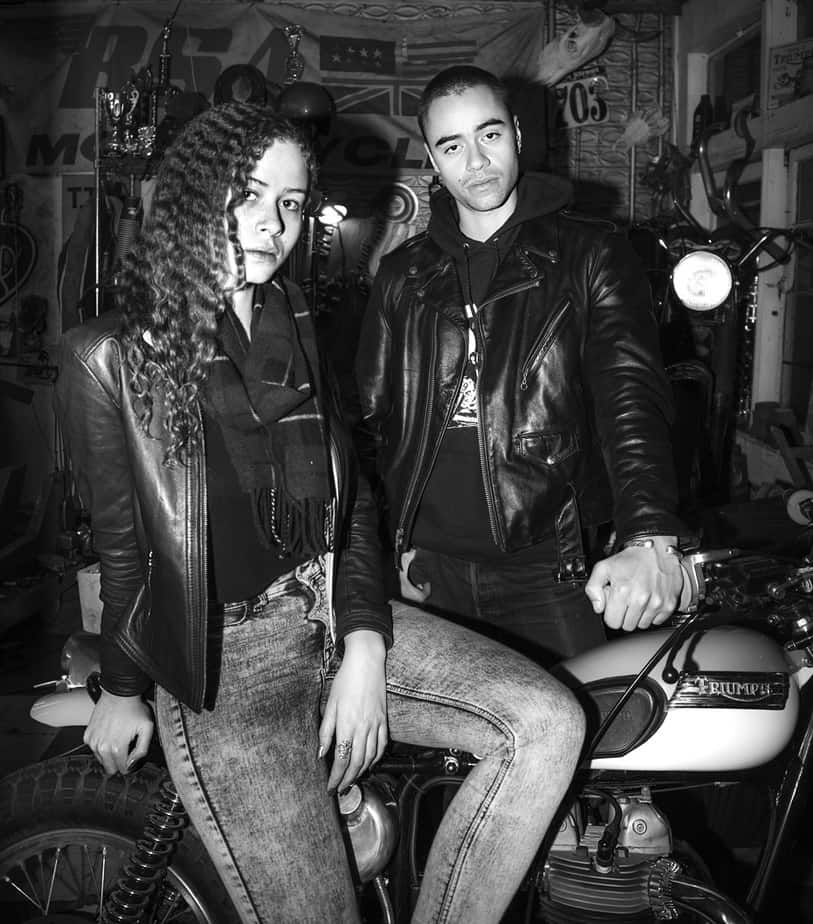 Tiger: We have lived on 6th and C for over 25 years. The neighborhood is definitely part of our lives. When we were kids every single storefront on avenue C was closed down. There was so much debilitation with drugs and many buildings were falling apart. The plethora of empty lots and junkies is such a stark contrast to what our block and neighborhood look like these days. In just the past decade alone the neighborhood has become flush with so many people moving in, bars and restaurants. It’s night and day. Of course, we would like to stay here if we can. This is our home. It would be the best scenario.

Keith: There is an excess of bars and restaurants which cater to the new population, but amenities for the longstanding Loisaida community are dwindling: butcher shops, hardware stores, affordable services. 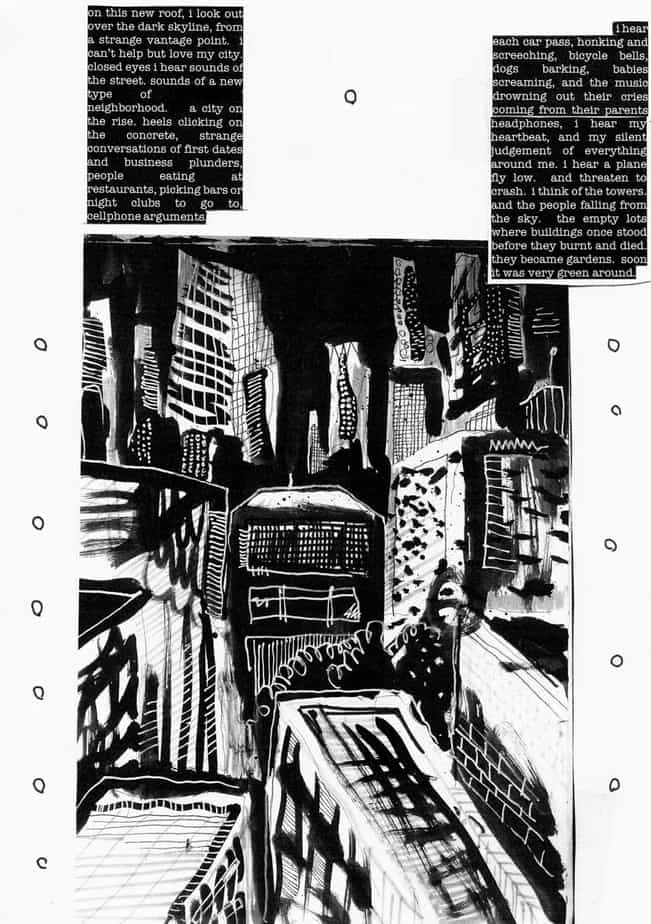 J+A: Are there any positives to the gentrification you both have experienced in the neighborhood?

Keith: I’d like to say that the crime has gone down but I’m not necessarily sure if that’s true.

Tiger: I’d say that people feel safer but it’s come at the cost of people feeling they’re being pushed out. People who’ve resided in the neighborhood their entire lives are now being treated like second-class citizens in their own neighborhood. 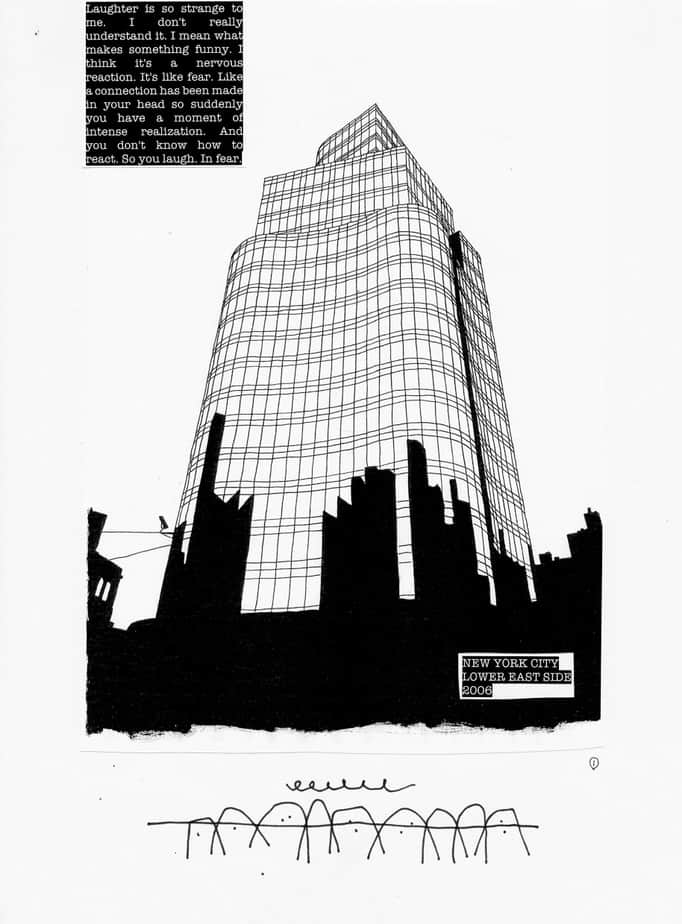 Keith: It’s sad to see that a neighborhood can’t be both safe and protect the citizens and businesses that are already there. I see a lot of people from Manhattan being pushed out to Brooklyn: Bushwick, Bed-Stuy, East New York and creating their own little cliques there.

Tiger: That’s why a lot of the art scene has moved out to Brooklyn. You used to be able to support yourself on a painter’s salary in the East Village.

Keith: In the 80’s it was exploding with talent and vitality. It’s now more of a cultural wasteland. But my work is still so related to the neighborhood that it’s hard for me to leave. 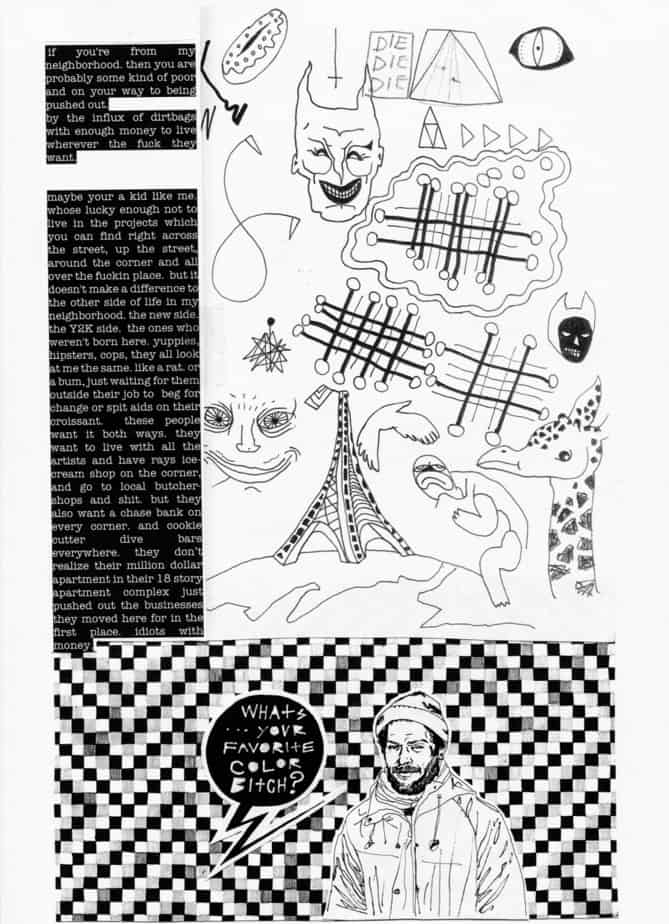 Tiger: It’s still such a great location and great for so many reasons I feel like the shop (Sixth Street Specials, run by the Mackie family) is such a good example of that, and if the shop were to leave the neighborhood, the EV would lose one of its richest assets. This is an original motorcycle shop from the 80’s. It’s important to both of us that our family stays here. 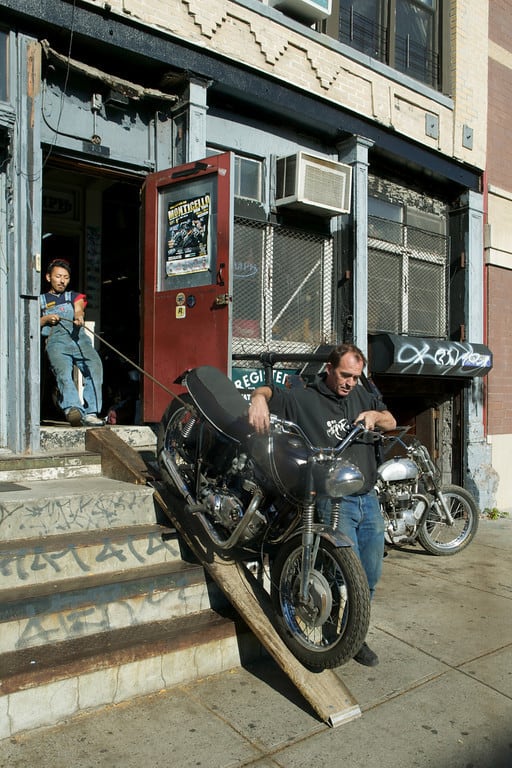 J+A: (We Conducted the majority of this interview before the recent events of this political administration were executed). With the current political situation taking a dubious and depressing turn toward conservatism do you see your work shifting or changing in any way?

Keith: I’ve always been pretty hard on government. I just hope that now Trump’s in I won’t be too afraid to do the same thing I’ve always done.

J+A: In the recent book you created there a lot of political themes: police brutality, bigotry, POC’s experience in the LES/NYC.

Keith: As long as the gov’t is here to stay, so am I and the work I want to make. 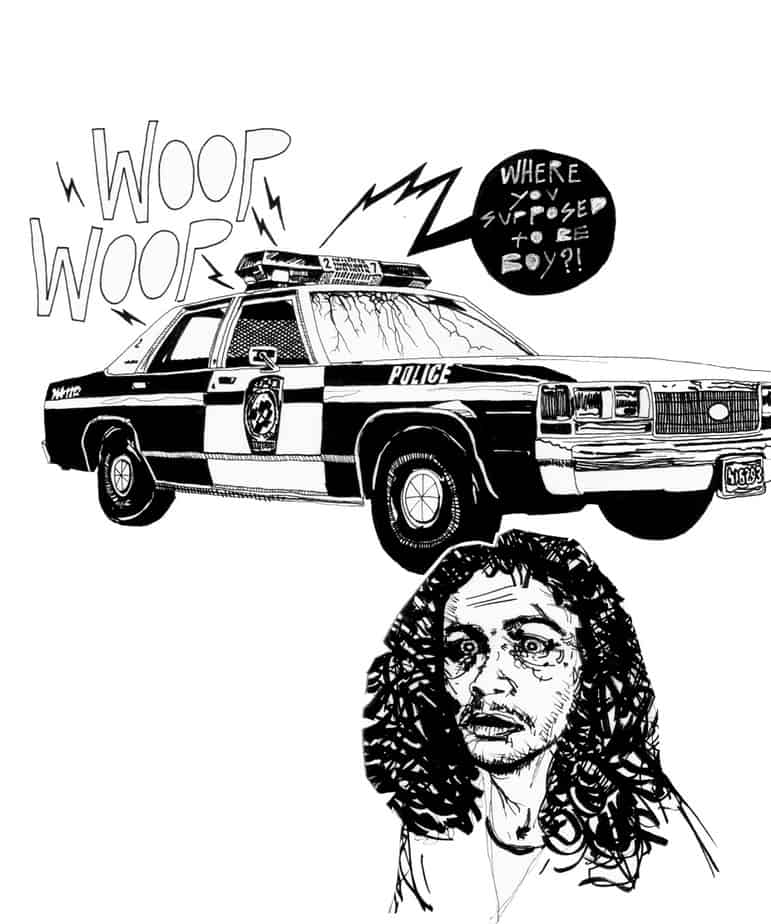 Keith: It’s scary to think I’m almost at war with the president, you know, a president I don’t consider an ally.

Keith: The political climate can’t be ignored if you’re an artist. 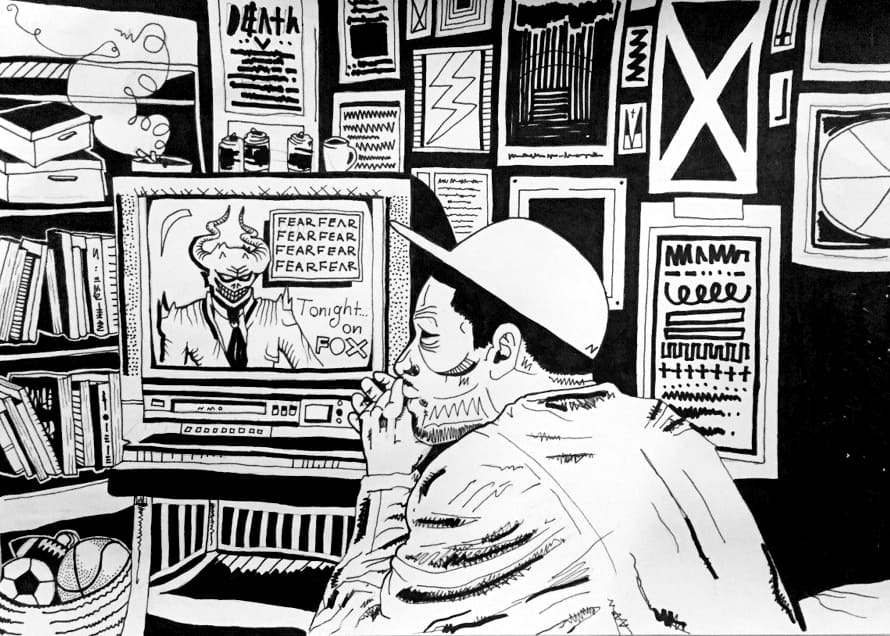 Well, thank you, both for sharing some of your thoughts with us and Quiet Lunch Magazine. We think NYC needs artists like yourselves and we hope you both stay here for many more years to come.

Artist duo Jared Oppenheim and Alannah Farrell work in mediums that include painting, multi-media and installation works.
Their work has appeared in publications including Quiet Lunch, Juxtapoz, NY Magazine’s Bedford + Bowery, New York Optimist, Next, and The Wild Magazine, amongst others.
Together and separately their work has been presented and curated in London, Berlin, and in NYC. Currently, they live and work in the East Village, NYC.